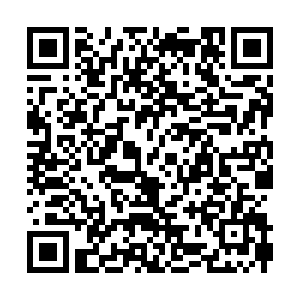 Leaders of the Group of 20 major economies pledged on Thursday to inject five trillion U.S. dollars in fiscal spending into the global economy to blunt the economic impact of the coronavirus and "do whatever it takes to overcome the pandemic."

Showing more unity than at any time since the 2008-2009 financial crisis that led to the G20's creation, the leaders committed during a video conference summit to implement and fund all necessary health measures needed to stop the virus spread.

In a statement containing the most conciliatory language on trade in years, the G20 leaders pledged to ensure the flow of vital medical supplies and other goods across borders and to resolve supply chain disruptions.

As many countries enact export bans on medical supplies, the G20 leaders said they would coordinate responses to avoid unnecessary interference.

"Emergency measures aimed at protecting health will be targeted, proportionate, transparent, and temporary," they said.

Saudi King Salman, chairs a video call of world leaders from the Group of 20 and other international bodies and organizations, from his office in Riyadh, Saudi Arabia, March 26, 2020. /AP

Saudi King Salman, chairs a video call of world leaders from the Group of 20 and other international bodies and organizations, from his office in Riyadh, Saudi Arabia, March 26, 2020. /AP

The G20 leaders also expressed concern about the risks to fragile countries, notably in Africa, and populations like refugees, acknowledging the need to bolster global financial safety nets and national health systems.

"We are strongly committed to presenting a united front against this common threat," the G20 leaders said in a joint statement following their 90-minute call.

The G20 leaders also asked the International Monetary Fund and the World Bank Group "to support countries in need using all instruments to the fullest extent."

On health response, the G20 leaders committed to close the financing gap in the WHO's response plan and strengthen its mandate as well as expand manufacturing capacity of medical supplies, strengthen capacities to respond to infectious diseases, and share clinical data.

Saudi Arabia, the current G20 chair, called for the video summit due to earlier criticism of the group's slow response to the disease. It has infected more than 470,000 people worldwide, killed more than 21,000, and is expected to trigger a global recession.

Saudi King Salman, in his opening remarks, said the G20 should resume the normal flow of goods and services, including vital medical supplies, as soon as possible to help restore confidence in the global economy.

"We are at war with a virus – and not winning it," Guterres said. "This war needs a wartime plan to fight it."

It took the world three months to reach 100,000 confirmed cases of infection. The next 100,000 happened in just 12 days. The third took four days. The fourth, just one and a half, he said.

"This is exponential growth and only the tip of the iceberg."

Solidarity is essential – among the G20 and with the developing world, including countries in conflict, he said.

He asked for a coordinated G20 response mechanism; efforts to minimize the social and economic impact, including stimulus packages; and a vision for sustainable development to ensure a healthier recovery of the world economy. 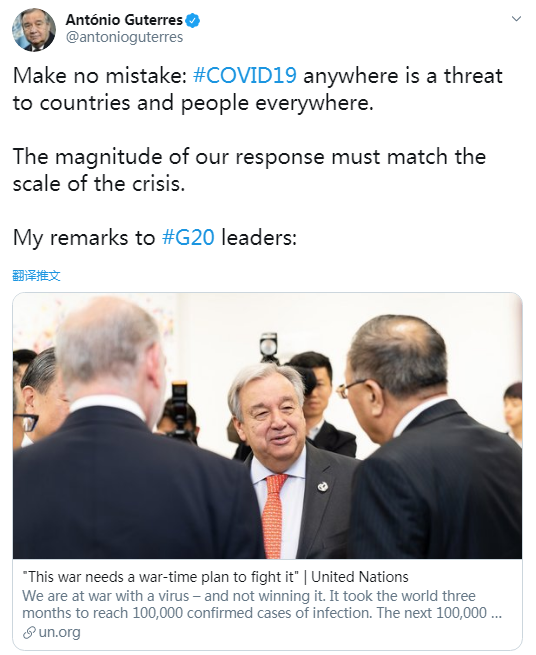 World Health Organization (WHO) Director-General Tedros Adhanom Ghebreyesus also asked the G20 to seek support for ramping up funding and production of personal protection equipment for health workers amid a global shortage.

"We have a global responsibility as humanity and especially those countries like the G20," Tedros told a news conference in Geneva on Wednesday. "They should be able to support countries all over the world."

Tedros told G20 leaders that the pandemic is "accelerating at an exponential rate" and urged them to remove export bans on personal protective equipment.

In his remarks to the group, U.S. President Donald Trump shared details of the six-trillion-U.S.-dollar in support the United States is making available through legislation and increased Federal Reserve liquidity, including two trillion U.S. dollars in fiscal spending, and spoke in support of multilateral action and coordination.

Speaking at a White House briefing later, Trump said he had a great meeting with G20 leaders and they discussed the importance of sharing information and data on COVID-19.

G20 leaders expressed tremendous spirit to get the coronavirus over with, he added.

The number of reported infections in the United States has risen to at least 81,378, surpassing China. 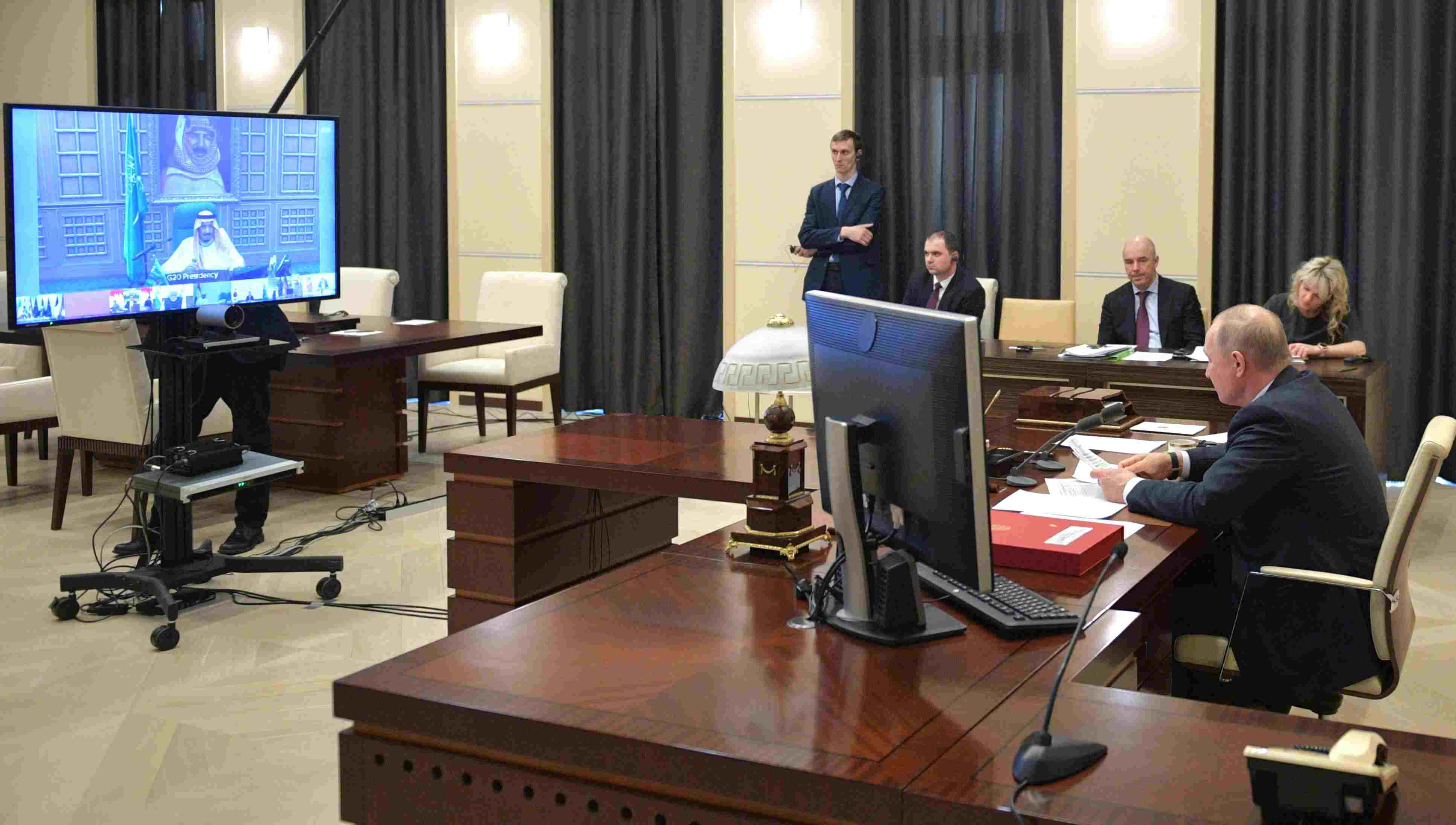 Russian President Vladimir Putin told the G20 video summit that participating countries need a common plan to support their economies amid the coronavirus outbreak and he proposed a moratorium on sanctions related to essential goods.

Putin also proposed creating a special fund under International Monetary Fund control to fight the spread of the virus.

On Wednesday, Putin warned in a nationwide address that the country should gear up for a major COVID-19 outbreak.

He proposed various unconventional emergency social measures to support families and businesses amid the global coronavirus outbreak, such as a week-long holiday for workers and higher taxes on dividends.

Russia has reported 840 cases of coronavirus, with three deaths. But the economy has been hit by prolonged uncertainty over coronavirus and tumbling oil prices, which has seen the ruble fall to four-year lows.

UK Prime Minister Boris Johnson announced during the call that Britain was providing additional funding to the Coalition for Epidemic Preparedness Innovations, which is supporting the development of vaccines, bringing its contribution to 250 million pounds (302 million U.S. dollars).

The meeting was not marred by acrimony, as was feared given the ongoing oil price war between Saudi Arabia and Russia, Reuters reported citing the source. 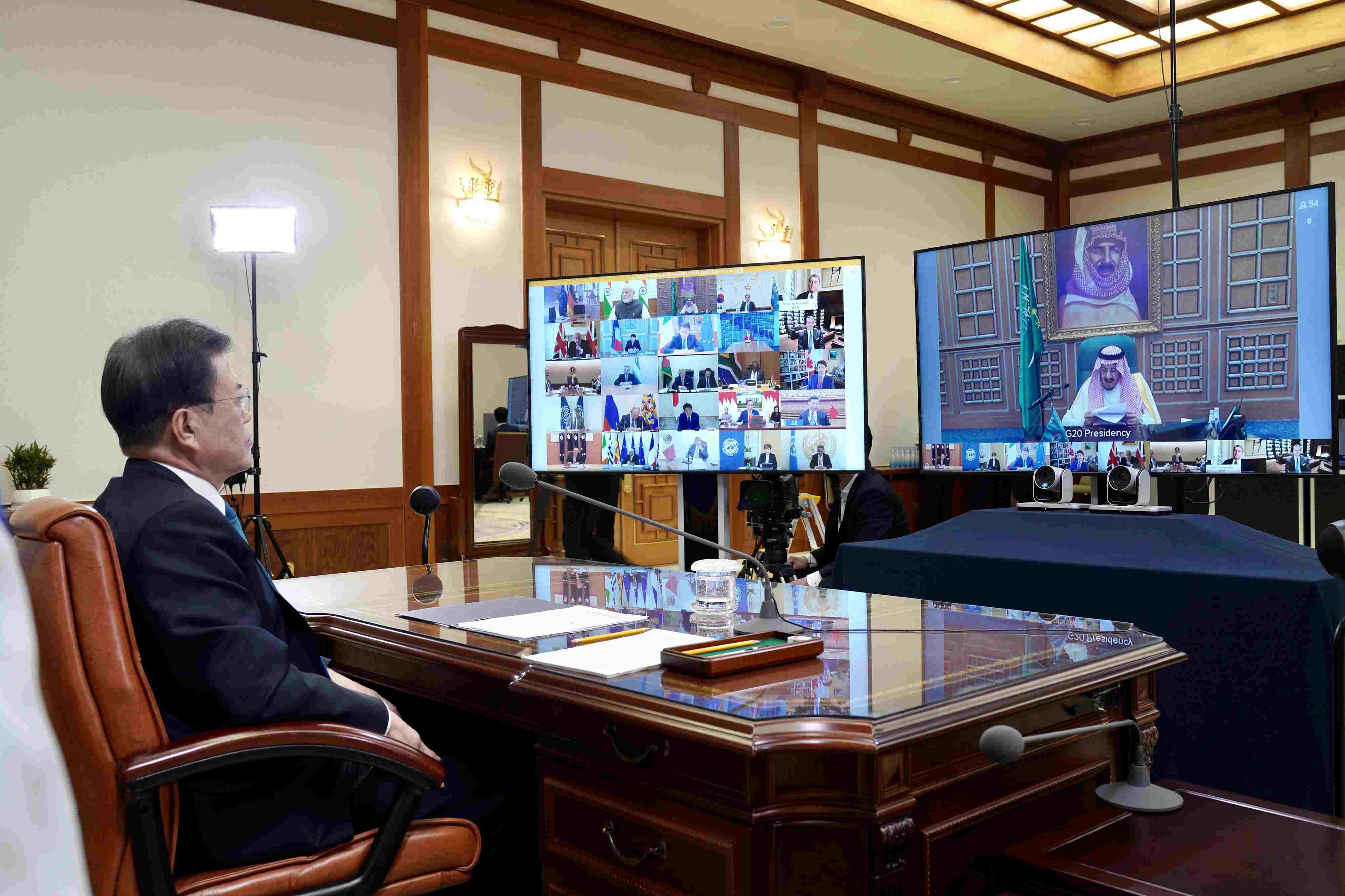 Italian Prime Minister Giuseppe Conte, whose country has reported 8,165 deaths, with a total of 80,539 infections, said the G20 must use all fiscal and monetary policy tools to safeguard economies," and national responses must be coordinated, enhancing their effectiveness."

Spanish Prime Minister Pedro Sanchez, whose country has extended its lockdown to at least April 12 with 4,089 deaths reported, asked the G20 to work with the WHO and other organizations to do "whatever it takes" to contain the pandemic and asked for an "unprecedented, robust and large scale" response.

(Cover: Saudi King Salman, chairs a video call of world leaders from the Group of 20 and other international bodies and organizations, from his office in Riyadh, Saudi Arabia, March 26, 2020. /AP)