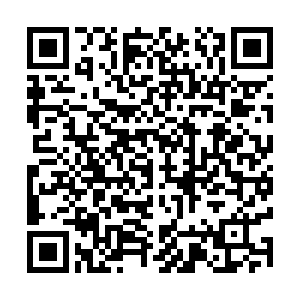 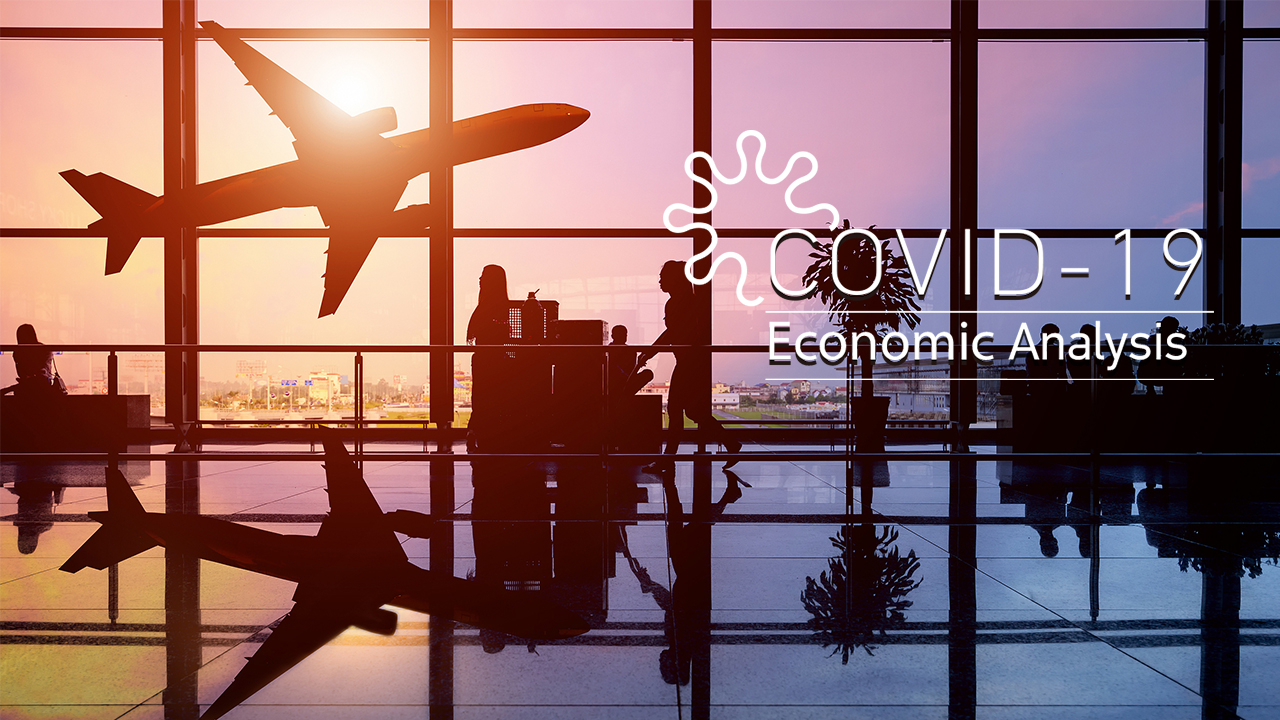 Editor's note: COVID-19: Economic Analysis is a series of articles comprising experts' views on developing micro and macroeconomic situations around the globe amid the COVID-19 pandemic. The authors of this article, Zhong Ling, PhD in Economics from Yale University, is an assistant professor of Economics at Cheung Kong Graduate School of Business, and Wan Xi is an assistant professor of Economics at Nanjing Audit University.

As the COVID-19 outbreak spreads from one country to another, air travel is believed to pose a higher risk of infection by travelers at departure cities, travel destinations, airports and on planes. As a result of falling demand for travel, flights from New York City to Orlando, Florida, dropped as low as 30 U.S. dollars. However, some people may still want to take the risk of flying. When the severity of their current location and their potential flying destination significantly differs, travelers taking a flight to the much safer destination is in fact a rational decision. This increased demand for flight tickets for certain routes has more than doubled in price. For example, a one-way ticket from Boston to Beijing is at least 4,291 U.S. dollars, with a remarkable duration of 40 hours. 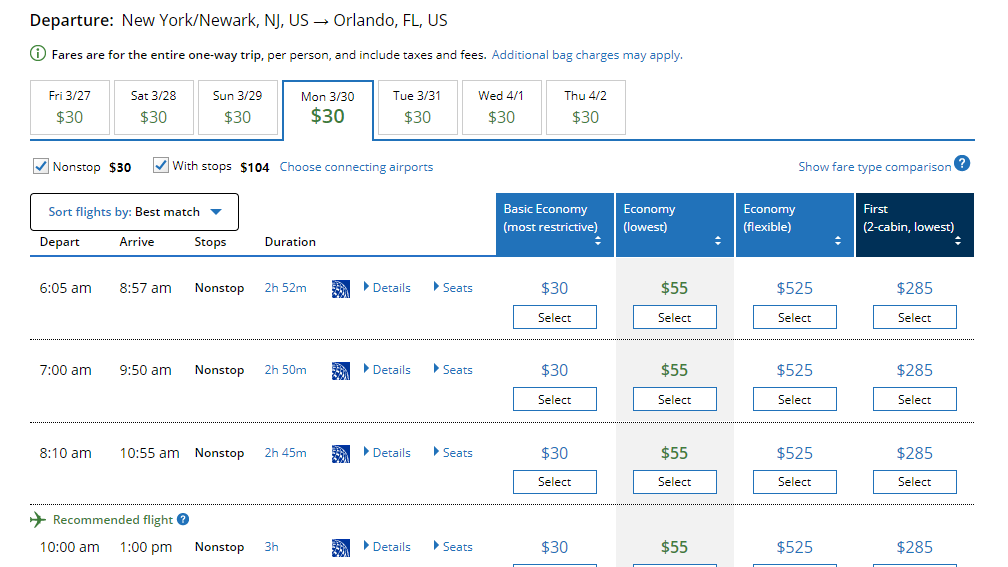 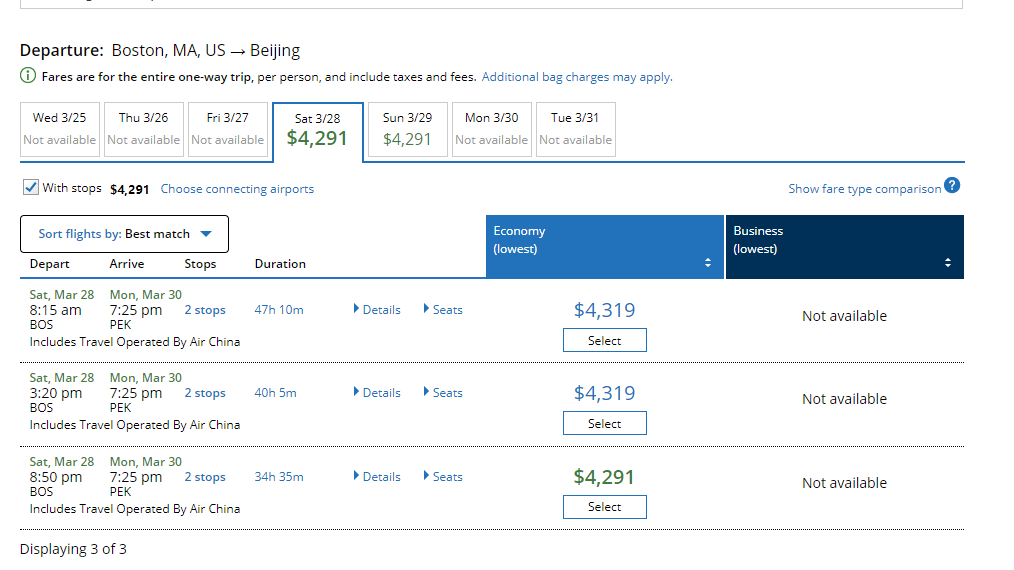 When we graph the price of flight tickets from London to Beijing and the number of new confirmed cases in both cities along the same timeline, we see very interesting patterns: In both instances, we see slow initial growth followed by prompt exponential growth. The flight fares increase in a similar pattern, but a few days prior to the growth of the number of infections. 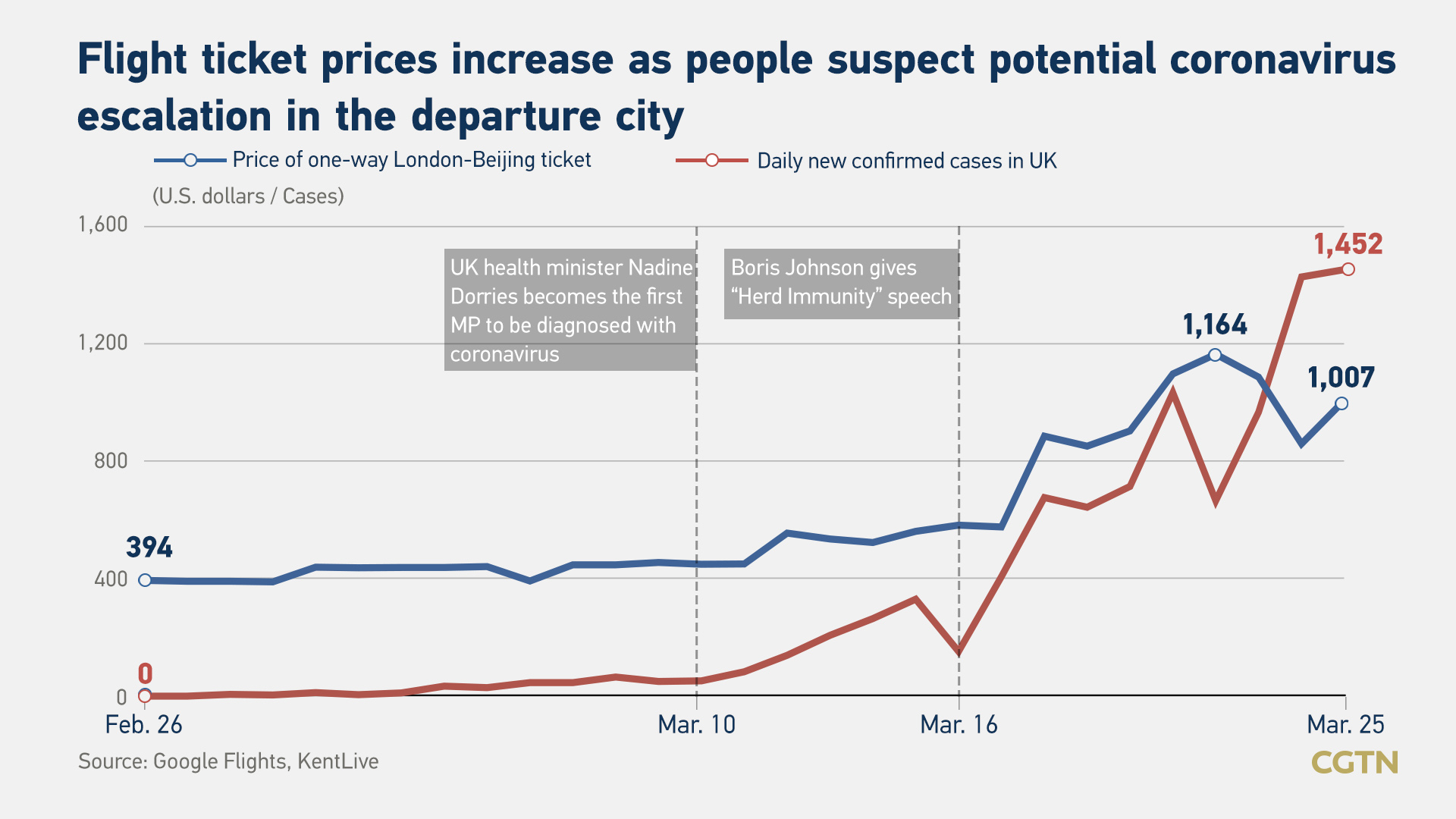 Ticket prices seem to react to future virus outbreaks. We believe this is because local people usually have a greater understanding of the epidemic's current situation nearby, and are able to use the information to predict the development of the spread in the near future. As the population collects information from various sources and assesses the current situation to form rational predictions for future development, they are willing to pay a higher price for a trip to a place, in their prediction, that is safer than their current location.

Potential travelers also compare multiple destinations. The price premium they can accept on top of a reasonable base price is proportionate to the level of safety at the destination. We observe this pattern when we compare the ticket prices from London to five other cities. The percentage increase in airfare from London to Shanghai is 292 percent, 226 percent for Frankfurt and 212 percent for Beijing.

Policy change, on the other hand, is a common factor that affects prices of all flights departing from a given city. Using data from Google Flights, a rough assessment of the London-Beijing route supports our theory in an interesting way: The fare soared starting March 18, two days after UK Prime Minister Boris Johnson made the speech about "herd immunity," which caused many people to feel uneasy. The daily price hike was 2,200 yuan (309 U.S. dollars). Other routes departing from London reacted to the event by showing similar patterns in the time span between March 16 and March 20. 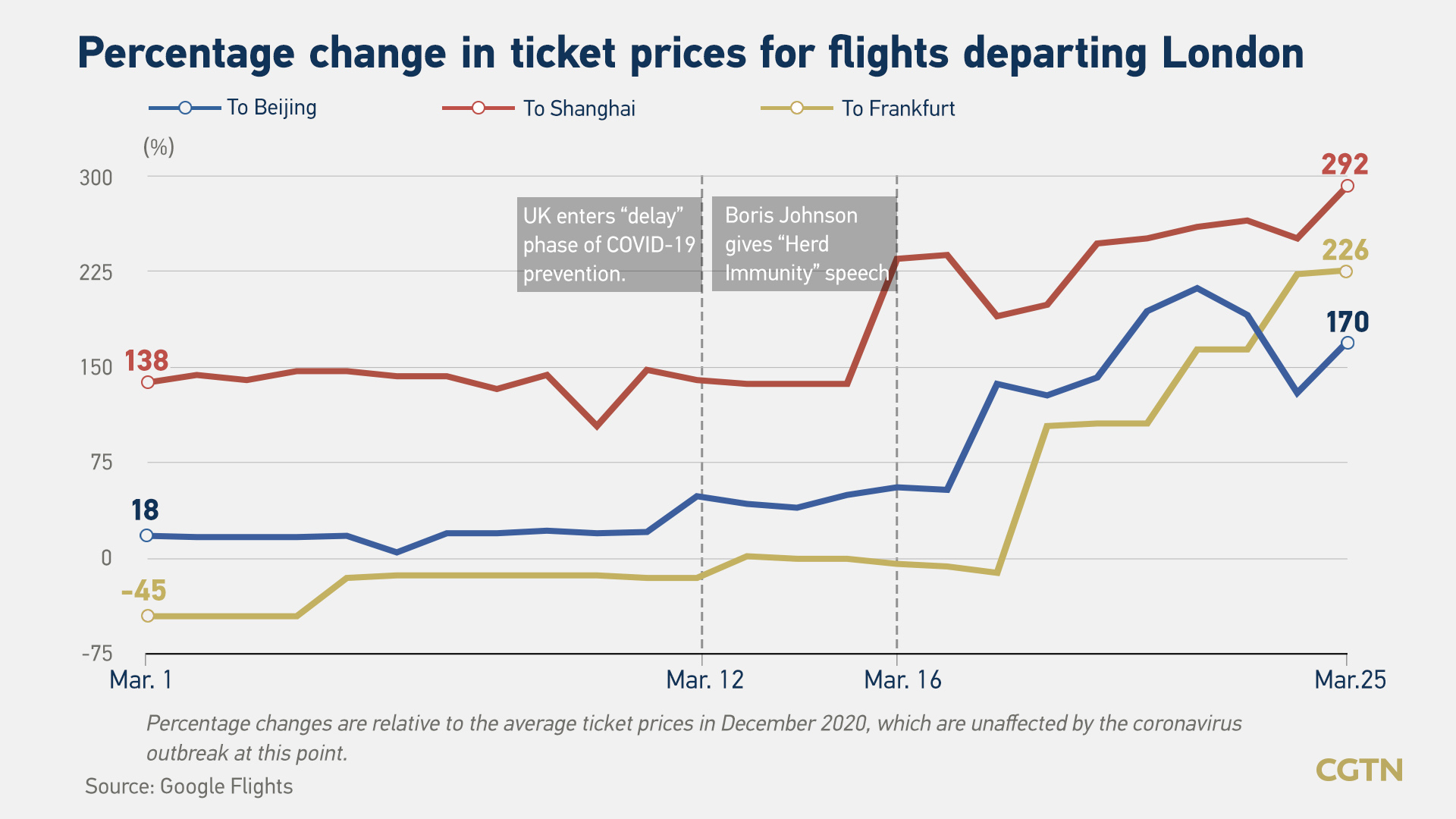 Zoom in to the flight-to-outbreak time gap, which is the number of days between the date the airfare reacts to local spread and the date in which the number of confirmed COVID-19 cases goes up. This time window is an incredibly valuable pre-warning for the virus outbreak in a local area. It is supporting evidence of the practical message from the medical workers and the theoretical model inferences from public health research. We used the London-to-Beijing ticket price to predict the number of new confirmed cases in the UK. It turns out that the prediction model performs the best when we use the price from precisely two days ago. Considering how contagious COVID-19 is, the two-day flight-to-outbreak time gap is more than half of the time it takes for the number of confirmed cases to double in New York City.

We think the flight-to-outbreak time gap represents people's beliefs about the government's ability to test potential patients, contain the virus spread and treat sick patients. The more faith people have in the local government and public health system, the longer they wait for new policies or for signs of a slowdown in infections before deciding to leave.

Government's attitude toward the people's welfare versus the economy

As the virus becomes a major issue in many Organisation for Economic Co-operation and Development (OECD) countries, the respective governments reveal different attitudes when it comes to choosing between saving the economy and containing the virus outbreak. For example, despite work and school closures and advice to stay at home – measures that experts believe to be critical in limiting the spread of the virus – many countries worried about the economic fallout from the pandemic and delayed imposing stay-at-home rules. People from countries such as the U.S. – where the government has attempted to downplay the severity of the coronavirus and to resume regular economic activity too early – would be disappointed in how the government seems to be valuing people's lives. And after comparing their local government's policy strategy with other countries, they are very likely to pay for an expensive flight ticket to flee from a possible future epicenter.

Capacity of a nation's health system

Confidence in the government's ability to contain the virus outbreak also affects residents' plans to flee. As the number of infections surges, many countries around the world have reported serious shortages of ventilators, respirators, test kits, surgical masks, and other pieces of health equipment that are essential to treat infected patients. South Korea was one of the earliest countries to witness a significant escalation in cases, but after proper control measures, the number of COVID-19 cases dramatically declined from 909 cases on February 29 to 100 cases on March 25. The backbone of South Korea's success is attributable to large-scale tests performed across the whole country followed by rigorous contact tracing.

Spending on healthcare is also an important indicator of the level that a nation is prepared for the virus. According to Forbes, Germany stands at a high level of critical care infrastructure with 29.2 ICU beds per 100,000 inhabitants, while the number for Italy is only 12.5. This information on public health infrastructure signals a better capacity to handle the illness, which may be a major factor of low death rates. Germany and Switzerland now offer ICU beds to neighboring France, where the capacity is overstretched. Potential travelers are very sensitive to the differences in the overall capacity of the countries' health systems, and their preferences are also reflected in the ticket prices of flights out of Seoul, and flights to Frankfurt, Paris, Rome and Milan.

Having gone through almost a full cycle of the virus outbreak, China now becomes a promising shelter for people from the current epicenters, from both the policy implementation and healthcare perspectives. Thousands of people, in particular college students studying abroad, are spending tens of thousands of yuan on flight tickets to come back to China, seeking lower infection risk, or better treatment in case they are already infected. 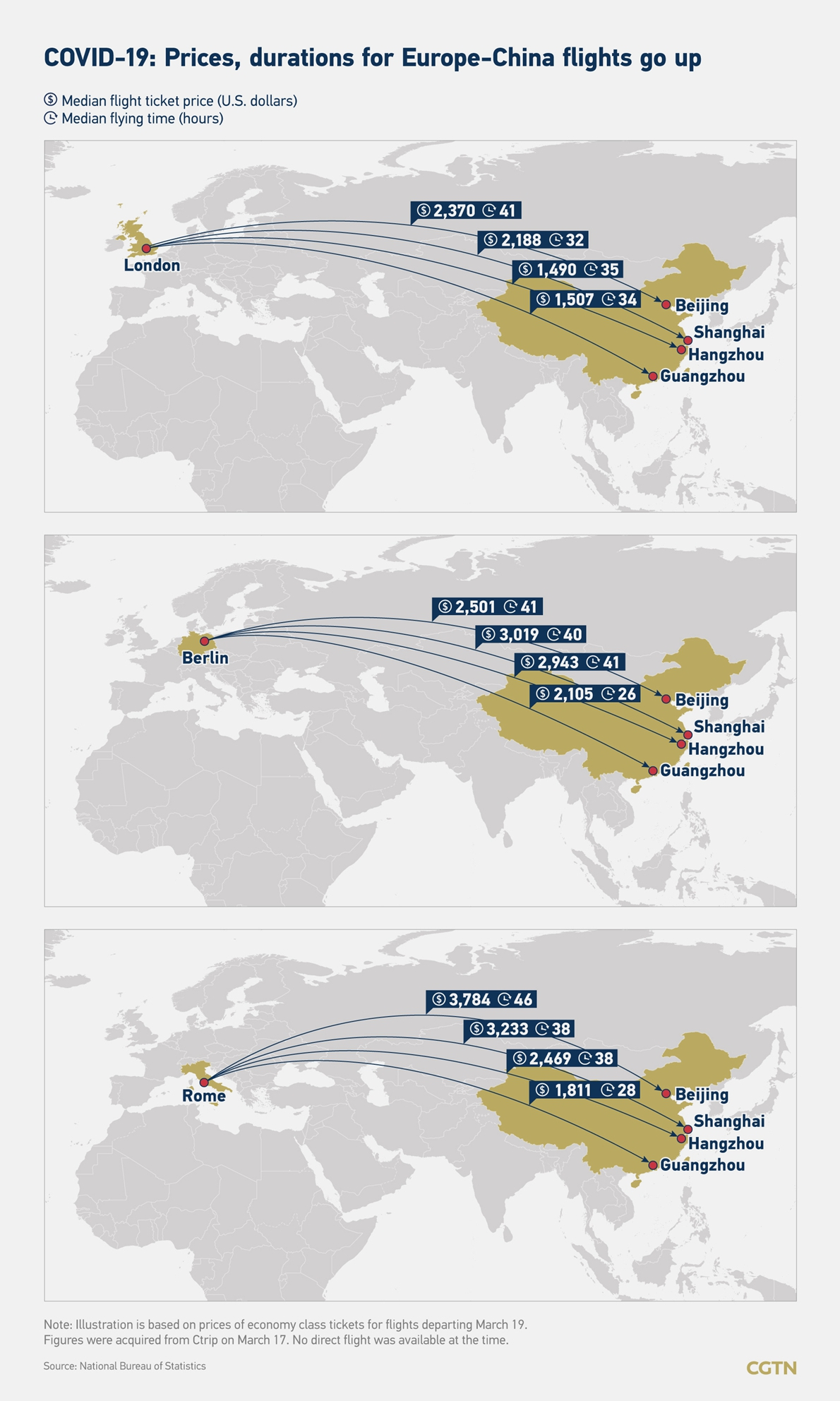 On March 26, China sharply cut flights entering the country to one flight per country per week. We speculate this significant reduction in the number of passengers allowed to enter the country will lift ticket prices for those unicorn flights more than ever.