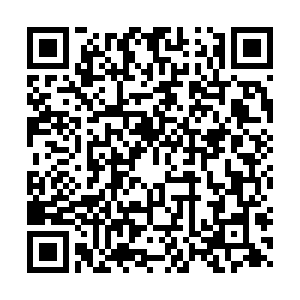 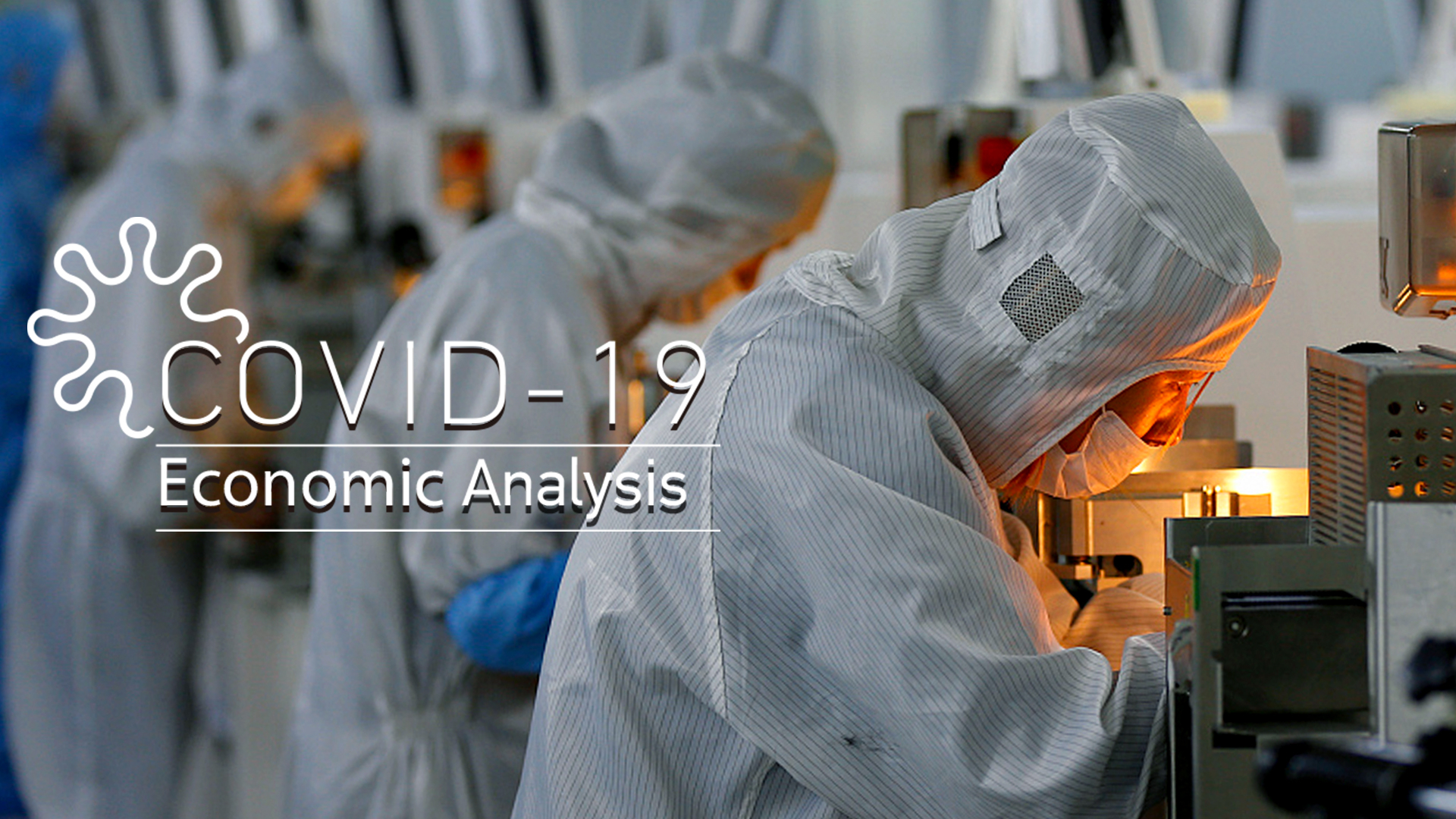 Editor's note: COVID-19: Economic Analysis is a series of articles comprising experts' views on developing micro and macroeconomic situations around the globe amid the COVID-19 pandemic. This article's author Jimmy Zhu is a chief strategist at Singapore-based Fullerton Research.

China manufacturing PMI surprisingly jumped to the above-50 territory, setting a great example that containing the virus spread at a quick pace is more effective than introducing an emergency stimulus package. Moving forward, the Chinese authorities' policy will continue focusing on the labor market to counter the weakening external demand.

China manufacturing PMI surges to 52.0 in March from the previous 35.7, highest level since September 2017. The key domestic demand gauge, new orders PMI, also jumps to 52.0, and the new export orders rise to 46.4. PMI reading above the key threshold usually means the economic activities are back to normal levels, but the situation in March is a special case. PMI surveys sent to those companies tend to focus on month-to-month comparisons, thus the March PMI figures may overstate the current manufacturing activities after the drastic quarantine measures China took in February. 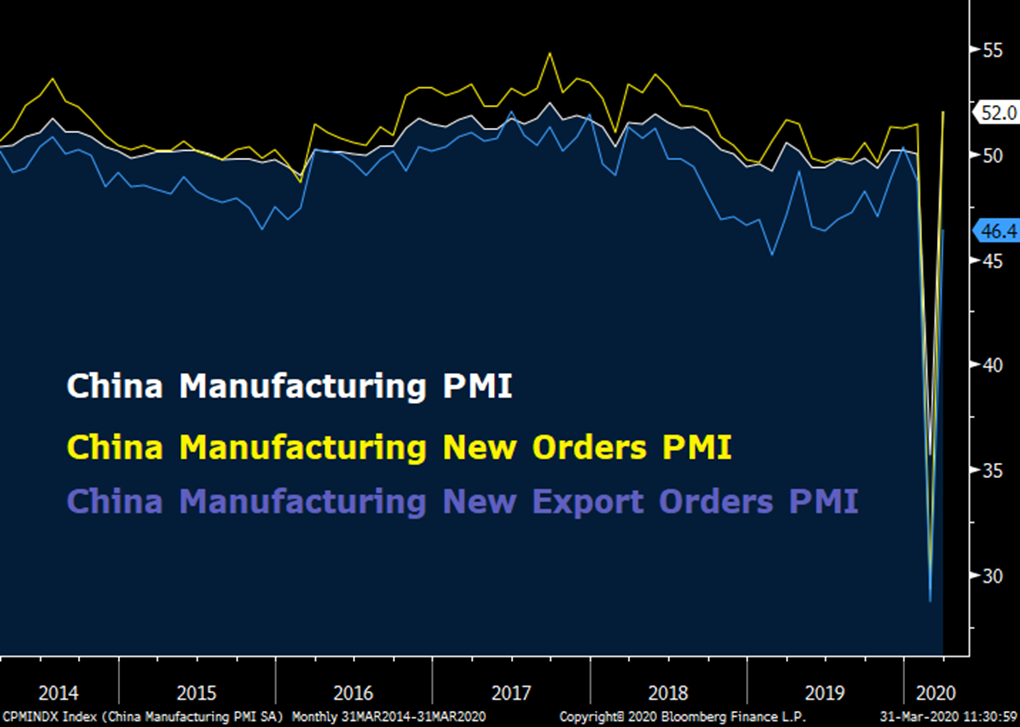 Still, the "V Shape" recovery in China manufacturing PMI signals that the production is returning into its normal capacity, and this has also been shown in other high-frequency data. Onshore yuan trading volume, one of the gauges to reflect the imports/exports activities, has been rising toward its normal level in March. The currency trading volume suggested the current production has been recovered around 80 percent to its normal capacity.

The PMI readings also show that the Chinese policymakers' effect to support the small-sized companies is working. The large companies' PMI stands at 52.6, while the small-sized companies' one at 50.9. The gap between the two at 1.7 percentage point is much narrower than the end of 2019, showing that recent PBOC's (People's Bank of China) various liquidity injections may have eased the SME's funding difficulties. Meanwhile, Standard Chartered China small medium enterprises confidence index also recovered to 49.6 in March.

Some of the other countries may attempt to contain the virus and stimulate the economy simultaneously, but this will be quite challenging. The manufacturing PMI may be able to serve as a perfect example for the global policymakers that containing the virus spreading as soon as possible is the most urgent task before stimulating the economic activities.

The quick recovery in China March's manufacturing activities also offers hopes to the world that the impact of the virus on the economic activities could be temporary, which would help to ease some of the recession fears in the market. One of the major reasons behind the recent selling off in global markets is that investors are lacking the knowledge and experience to forecast what will be the consequences after the drastic quarantine measures. After the release of the China PMI data, Asia's stocks market, from Singapore to South Korea broadly gained in Tuesday's trading sessions.

Looking ahead, the Chinese manufacturing outlook still remains very challenging, and the factory PMI may continue to drop into below-50 territory again as early as in April. The falling external demands are likely to weigh on domestic production. Most of the China major trading partners including the U.S., eurozone and many Asian countries' economic activities are seriously disrupted due to stringent quarantine measures and travel bans. The BDI index (Baltic Exchange Dry index) hints that global shipping activities started reducing since the middle of March, after a mild recovery from February.

Besides further fiscal stimulus to be announced in China, the market also expects the monetary policy to be more proactive. The deteriorating external demand would have a significant impact on those export-oriented companies, and many of them belong to the private sectors. Stabilization in private sectors is crucial to the nation's labor market.

Commercial banks may be less willing to lend cash to those private companies due to rising uncertainties. Thus, the PBOC may introduce new measures to encourage the banks to lend more to the private sectors if monthly new loans to decelerate sharply in the coming months.

One of the policies the PBOC could adopt is to lower the benchmark deposit rate, which the central bank hasn't moved since 2015. The cut in deposit rate will help to increase the banks' net interest margin, a measure of the difference between the interest income generated by banks or other financial institutions and the amount of interest paid out to their lenders. Higher margin tends to encourage the banks to lend more to the private sectors.