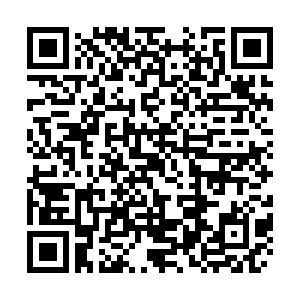 A Uruguayan football historian has stumbled upon three rare treasures from China's football heritage that he believes could be among the oldest and the most valuable football memorabilia from the Asian country to have ever been traced.

"The collection includes a leather ball used during the 1908-09 football championship season – this is the oldest surviving ball to have been used in all of China and Asia for an official football tournament; a club flag from 1912 with the initials ROC which stand for Republic of China (the official name of the country at the time); and a rare club team photo dated Hong Kong 1909 that shows one of China's earliest football greats Tang Fuxian," Rony Almeida told CGTN Digital in a WeChat video interview from the Uruguayan resort city of Punta del Este.

"These three items reflect an interesting period of history in Chinese football. I found them through a colleague of mine in Barcelona, Spain," he said.

The historic items are expected to form a part of the permanent collection at the planned international annexe of the Soccer Heritage Museum in West Palm Beach, Florida, U.S. – one of the two football museums of which Almeida is the founding CEO. The 1930 World Cup Museum in the Uruguayan capital Montevideo is the other one.

"The Chinese collections are at the Soccer Heritage Museum but not on display yet. The museum was curated with the idea of focusing only on the sport's U.S. heritage. However, now, we are planning to expand it to include international items from Brazil, Argentina, France, Italy and China to attract visitors from all over the world. The Chinese items will be great in drawing the interest of Asian football fans," Almeida said.

He said the museum was looking to inaugurate the international annexe in June, however, with the global disruption caused by the COVID-19 pandemic, the opening is likely to be delayed by a few months.

Almeida also plans to bring his collections to China if an opportunity arose. He revealed that Linzi Football Museum in Zibo in eastern China's Shandong Province has reached out to the Soccer Heritage Museum to inquire about the Chinese football memorabilia but nothing concrete has come out of these discussions yet.

"Our original idea will be to set up a few exhibitions in China with this material, as well as with other material from China's first international matches at the 1913 and 1915 Far Eastern Games and also the 1936 Berlin Olympics," he said.

"China made a good impression on those tournaments. They were champions [at the Far Eastern Games], but not many in China know much about this today," Almeida lamented. 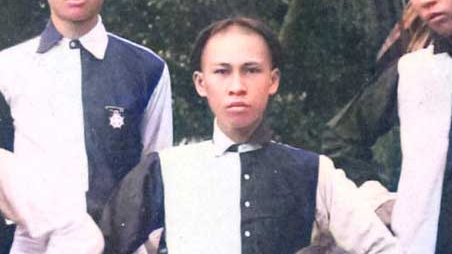 Tang Fuxian was the first captain of a Chinese national football team and also the first Chinese player to score an international goal.

Tang Fuxian was the first captain of a Chinese national football team and also the first Chinese player to score an international goal. 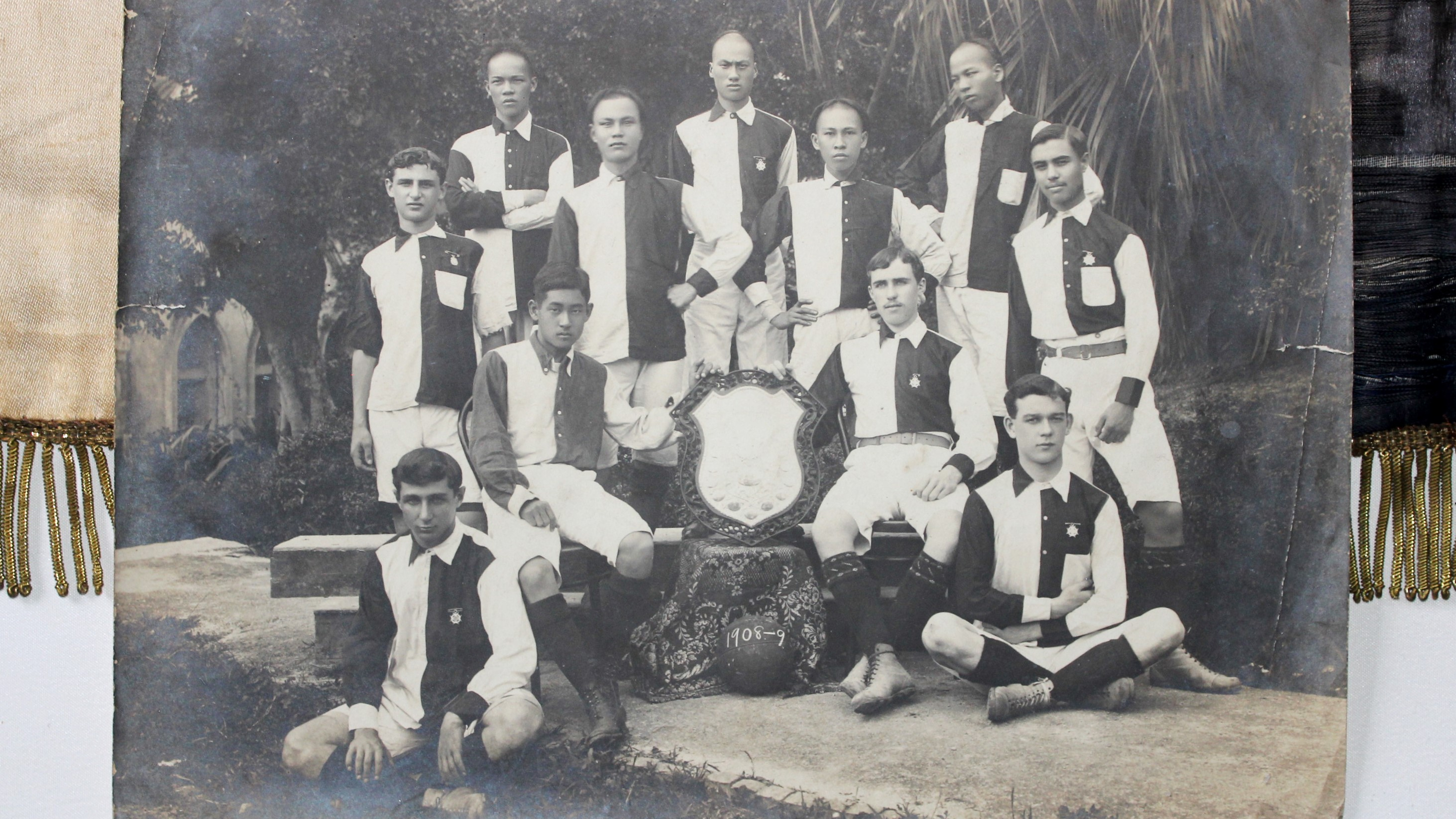 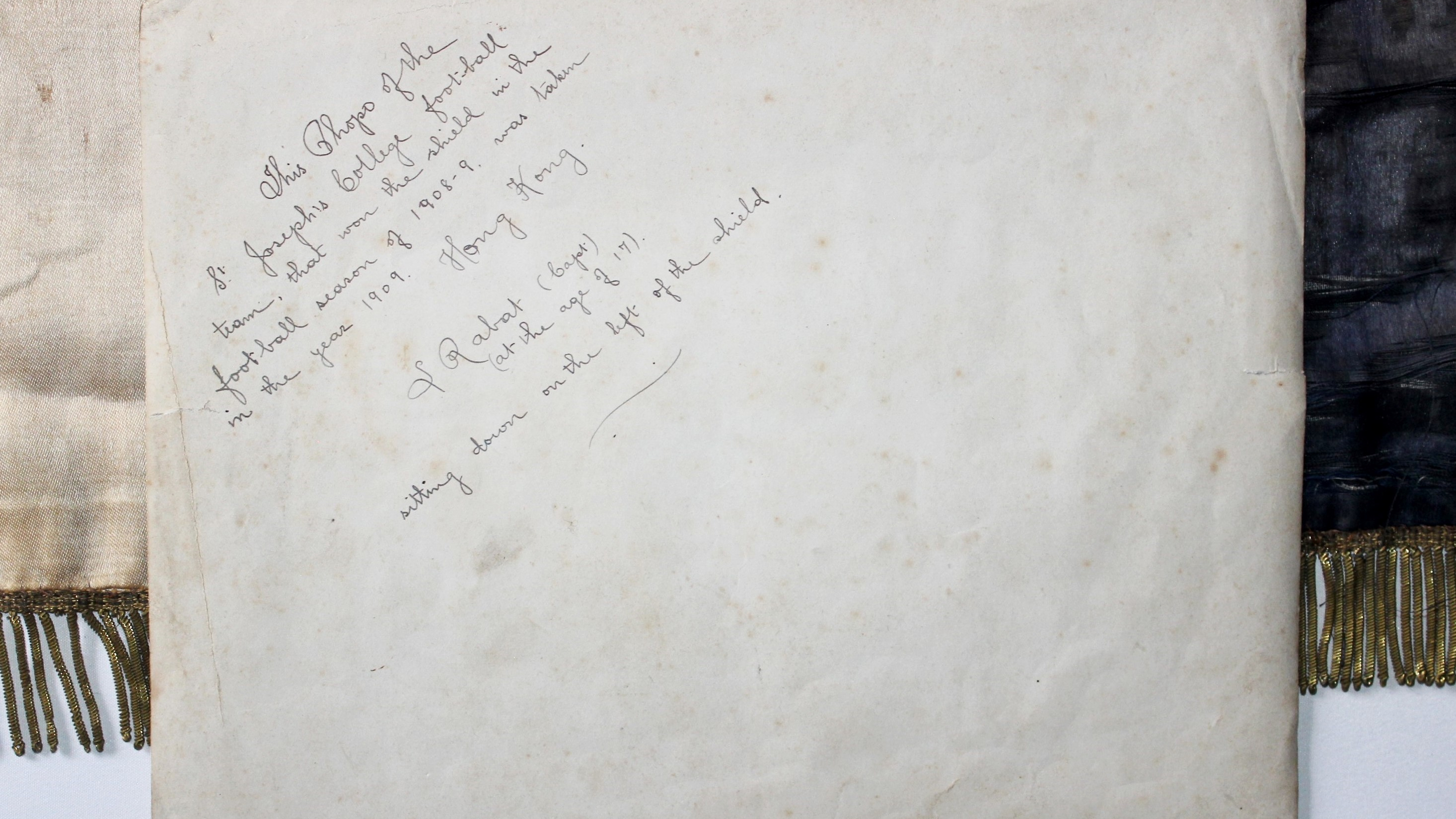 The inscription on the reverse side of the photo.

The inscription on the reverse side of the photo.

China had a formidable record at the football tournaments in the Far Eastern Games. Of the 10 tournaments held between 1913 and 1934, the Chinese football team won nine. China's only miss was at the inaugural tournament in 1913 (Manila), when they were defeated by the hosts, the Philippines, in the finals.

Chinese captain Tang Fuxian, who led the team in the first four editions of the Games winning three, made his reputation as the "Far East Football King," Almeida noted. "Tang was the first captain of the Chinese national [football] team and also the first Chinese player to score an international goal. This was against the Philippines in 1913. He was China's first great footballer."

Unfortunately, Tang's achievements do not find much mention in the annals of Chinese football history as the matches before the founding of Chinese Football Association in 1924 are not counted as A-level matches by FIFA.

The photograph in Almeida's possession shows a lanky Tang accompanying other members of the St. Joseph's College football team, the winner of the Hong Kong football season of 1908-09. The photograph was taken in the year 1909, according to the inscription behind.

"It is the earliest known photo of the Chinese legend, and perhaps also the first of a Chinese team line-up," Almeida quipped. Besides Tang, the team had five more players of Chinese origin. "These young players sowed the seeds of modern football in China." 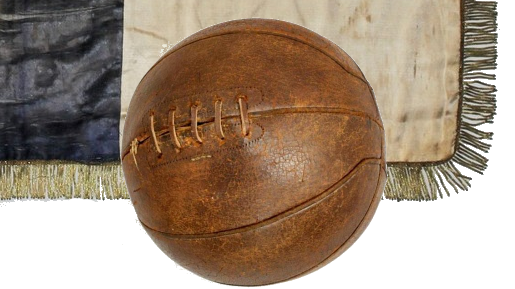 The eight-panel Chinese leather ball was used in the 1908-09 and is the oldest known ball from Asia.

The eight-panel Chinese leather ball was used in the 1908-09 and is the oldest known ball from Asia. 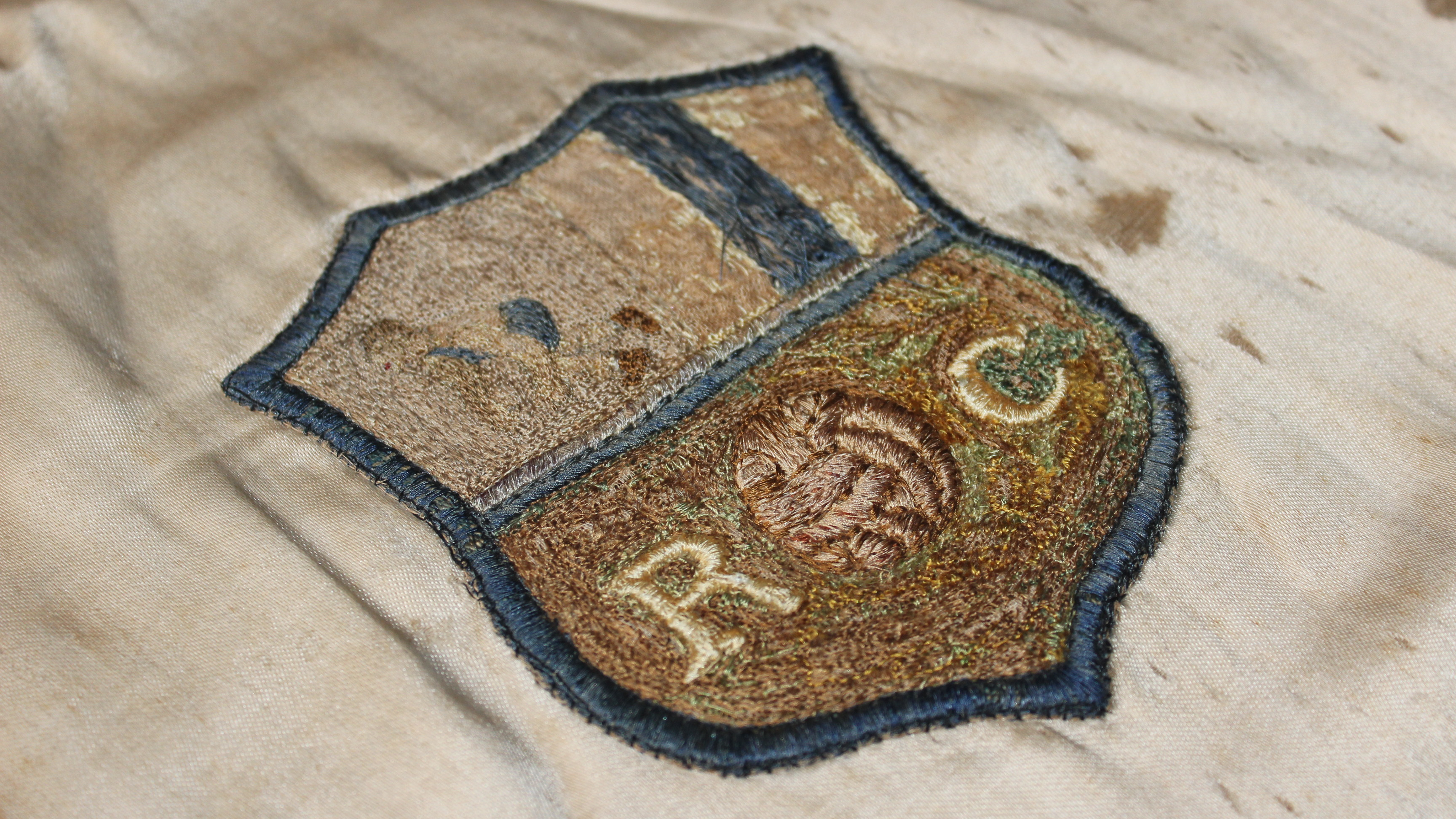 The insignia with the letters "ROC" on the two-sided white and blue silk flag dating back to 1912.

The insignia with the letters "ROC" on the two-sided white and blue silk flag dating back to 1912.

The eight-panel leather ball, now in Almeida's collection, was used during the same 1908-09 season and is the oldest known ball from Asia to still exist.

The two-sided white and blue silk flag with an embroidered insignia with letters "ROC" and golden ribbon running through the borders is from 1912. "This was the first cultural identity item in Chinese sporting history," Almeida said.

Describing his collection as "the earliest sports emblems of Chinese footballing pride," Almeida noted that the items reflect an interesting period of the sport's history in China.

He revealed that the items were initially in the possession of a Spanish football fan in Shanghai, who fled to Barcelona during the World War II. He carried all his football memorabilia with him. Almeida acquired the item from Barcelona through an associate.

"These were purchased with a set of historical documents which belonged to the Spanish community in Shanghai in late 1997. And from then on, we started studying and tracing the history of the items all the way back to Hong Kong and Macao in 1908," he elucidated. 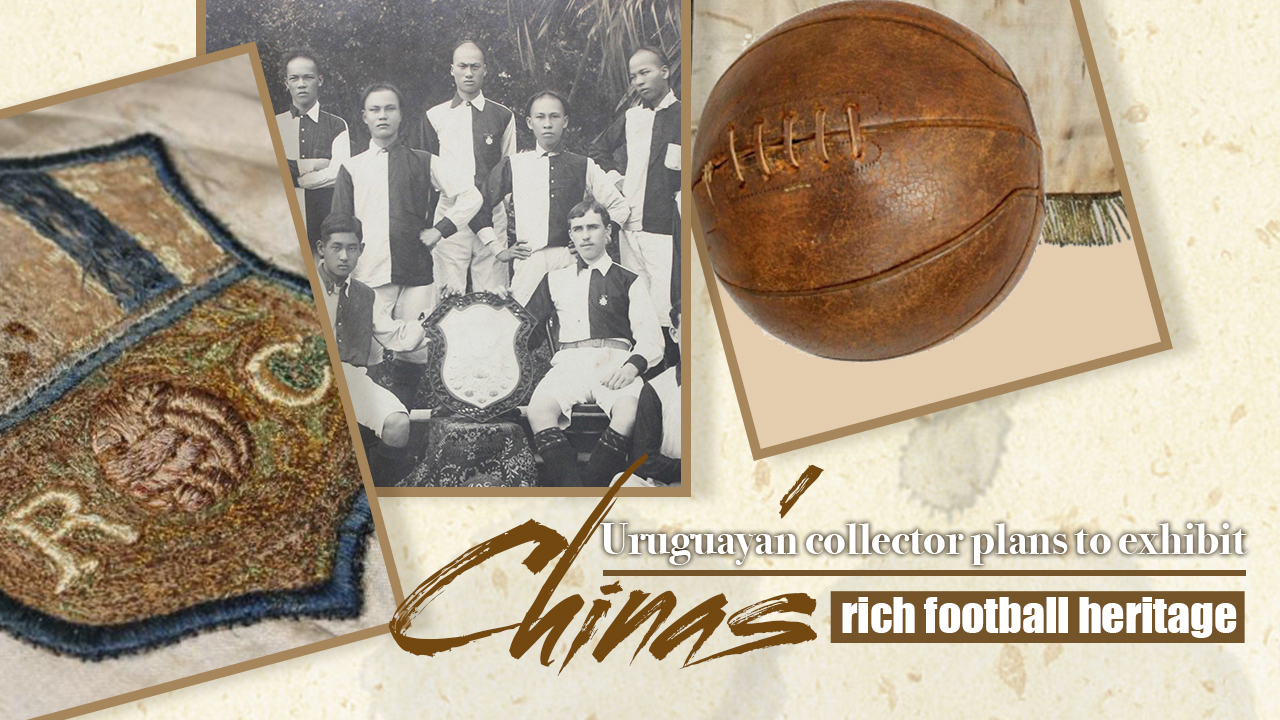 Almeida's interest in football memorabilia began in 1970s after a chance discovery with his father of some medals from the first FIFA World Cup in 1930 held in Montevideo. "I was inspired by my father, who was a keen numismatist with a strong passion about coins and medals," he told CGTN Digital.

Nurturing his passion over the decades, Almeida's collections today include an impressive range of items from some of the first international football tournaments, including the inaugural FIFA World Cup in Montevideo.

A firm believer of preservation of football relics, Almeida thinks China must build more football museums to celebrate the sport's history and heritage in the country.

"China has invested big money into building beautiful stadiums, into bringing top players, but in my honest opinion, I think China is still missing a very important and key issue here," he remarked noting the lack of football museums in the country.

"It is no coincidence that the world's most valuable football teams in the Forbes List have their own museums to attract visitors and increase their income and identity," he said, adding that Chinese leagues and clubs need to establish museums not only to enshrine their own footballing culture and identity but also for a greater push towards the country's rapidly expanding football sector.

"China mustn't confine itself to Tsu Chu (the ancient Chinese ball game believed to be the grand ancestor of modern football) but move beyond when it comes to football museum and connect with the sport's heritage. The basic idea of a museum is to make people experience and see first-hand the sporting history that could make them proud," Almeida concluded.

(All photos via Rony Almeida)