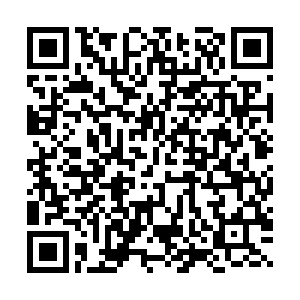 Wang thanked them for their support to China when it was carrying out all-out efforts to contain the virus in the past months, and said China is willing to offer medical supplies and share prevention and control experience with them.

Ukraine has confirmed 669 cases with 17 deaths, and Qatar reported 781 infections with two deaths.

Wang stressed that the virus respects no borders. It is a common enemy of mankind and thus requires a united response from the international community.

Ukrainian Foreign Minister Dmytro Kuleba said China has become a role model for the world in fighting the virus, and all countries should unite to contain the pandemic.

Ukraine appreciated China's offer of medical supplies and is willing to deepen cooperation in fighting the disease, he said.

Qatar thanked China for responding to its need to purchase medical supplies, and is willing to learn from China's experience, he added.

(Cover: A lone woman wearing a face mask passes by a sign depicting the name of the Ukrainian capital in front of the Kiev City Hall, Ukraine, March 25, 2020. /AP)