Will delaying the Olympics affect Japan's economy?
By Chen Yurong 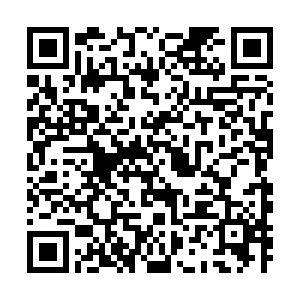 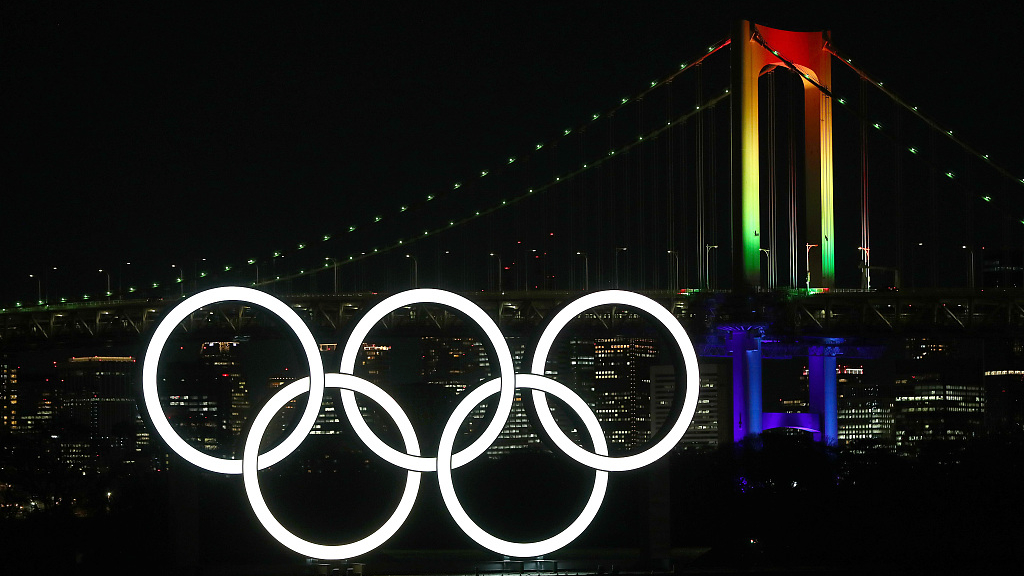 The Olympic rings are illuminated for the first time to mark 6 months to go to the Olympic games at Odaiba Marine Park on January 24, 2020 in Tokyo, Japan. /VCG

The Olympic rings are illuminated for the first time to mark 6 months to go to the Olympic games at Odaiba Marine Park on January 24, 2020 in Tokyo, Japan. /VCG

The postponement of the 2020 Tokyo Olympics will have a limited impact on Japan's economy in the short-term, said analysts, citing that the economic impact from the ongoing COVID-19 pandemic is more significant.

The Tokyo Olympic Games, which were originally scheduled to take place between July 24 and August 9 this year, were postponed by a year last Tuesday after Japan's Prime Minister Shinzo Abe and the International Olympic Committee (IOC) discussed the feasibility of the holding the event amid the global health crisis caused by the novel coronavirus.

Although some believe the postponement will have a tremendous impact on Japan's economy, the numbers and historical experience, suggest that the 2020 Olympics, had it been held according to schedule would not have been able to save Japan's staggering economy, nor will its delay hammer the country severely. 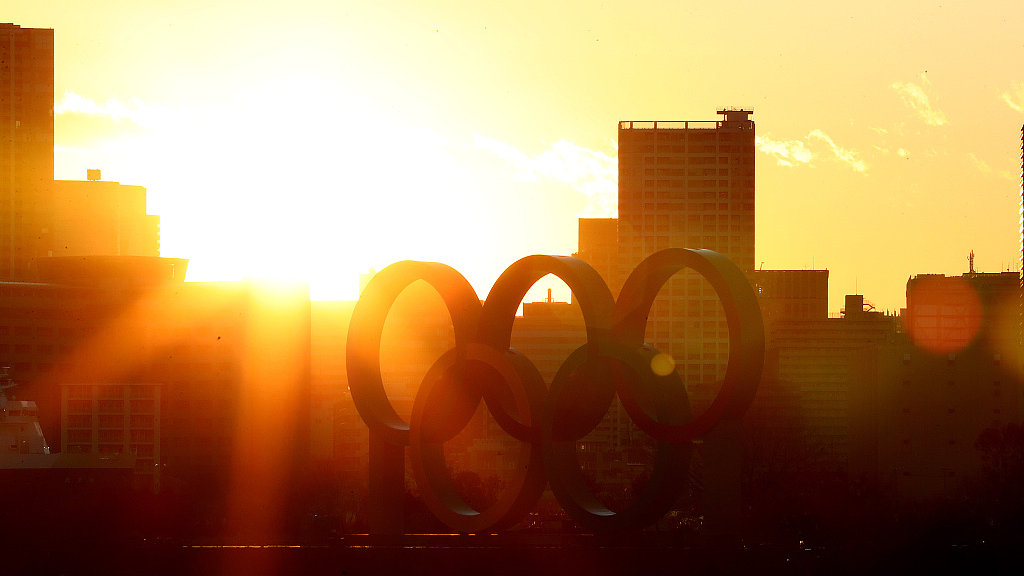 The sun sets behind the Olympic rings in Odaiba Marine Park in Tokyo, Japan on March 24, 2020. /VCG

The sun sets behind the Olympic rings in Odaiba Marine Park in Tokyo, Japan on March 24, 2020. /VCG

Even if the Olympics were canceled, it would still do little harm to the economy in the short term, according to a UBS report shared with CGTN.

Based on the Bureau of Tokyo Olympic and Paralympic Games Preparation estimates, the Switzerland-based investment bank estimated that the cancellation of the Olympics would depress growth by only an annualized 0.2 percent of GDP, given that direct Olympic-related spending is only about one trillion yen (about 93 billion U.S. dollars). 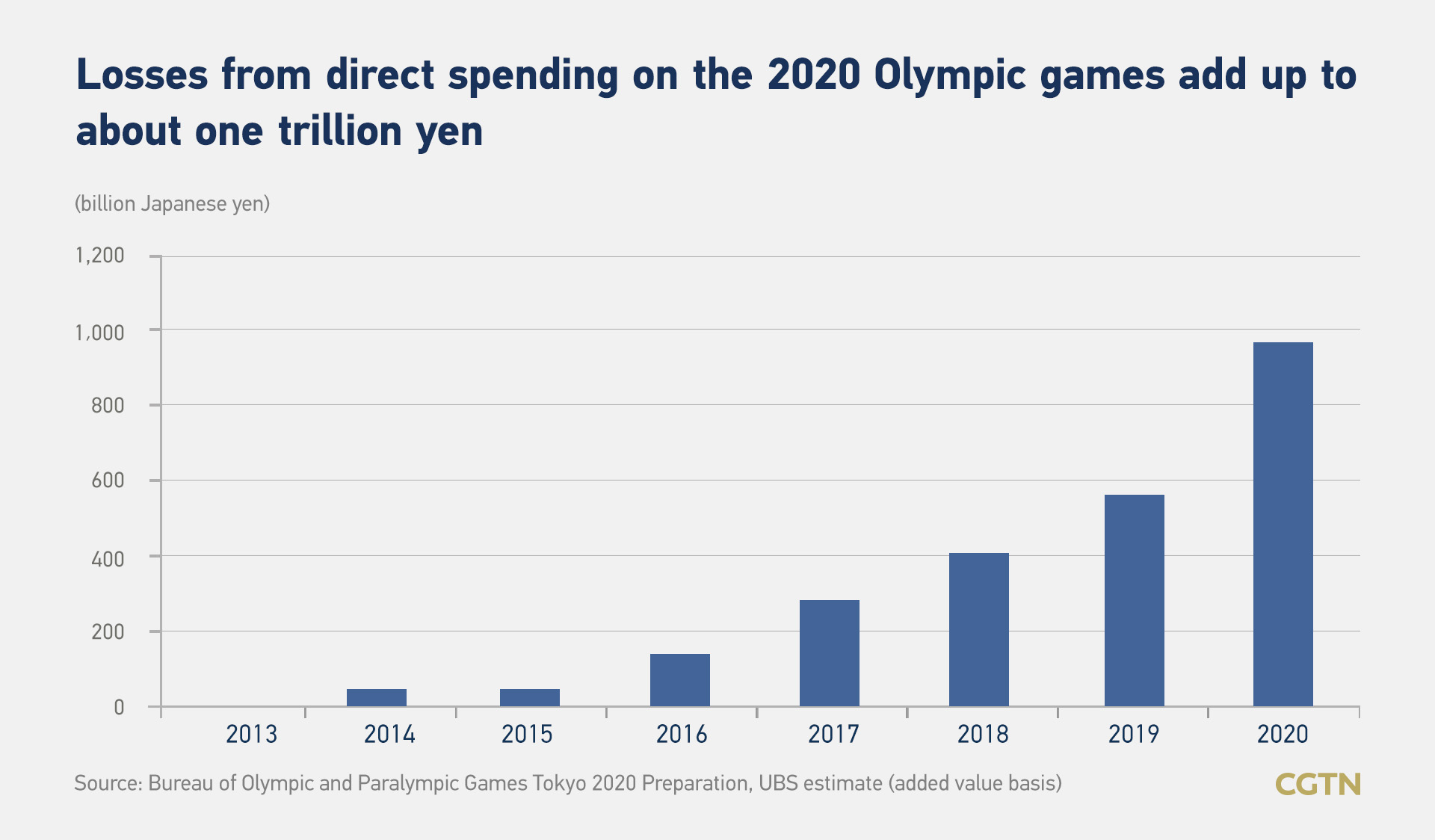 Kathy Matsui, chief Japan equity strategist at Goldman Sachs Research, echoed the idea. She said from a macroeconomic perspective, the overall impact of the postponement would be limited.

"If you actually look at the investment that's already occurred in public transportation, infrastructure and hotel development all of that. It's essentially most done. If we think in macroeconomic terms what the actual GDP impact of hosting the Olympics is, it really only comes down to about roughly seven billion U.S. dollars, which against a five-trillion-U.S. dollar economy that is Japan, only represents about 0.2 percent," Matsui said.

"So subtracting 0.2 percent is really not going to make or break for the economy. I think the larger concern is what's happening in the rest of the world vis-a-vis the coronavirus pandemic." 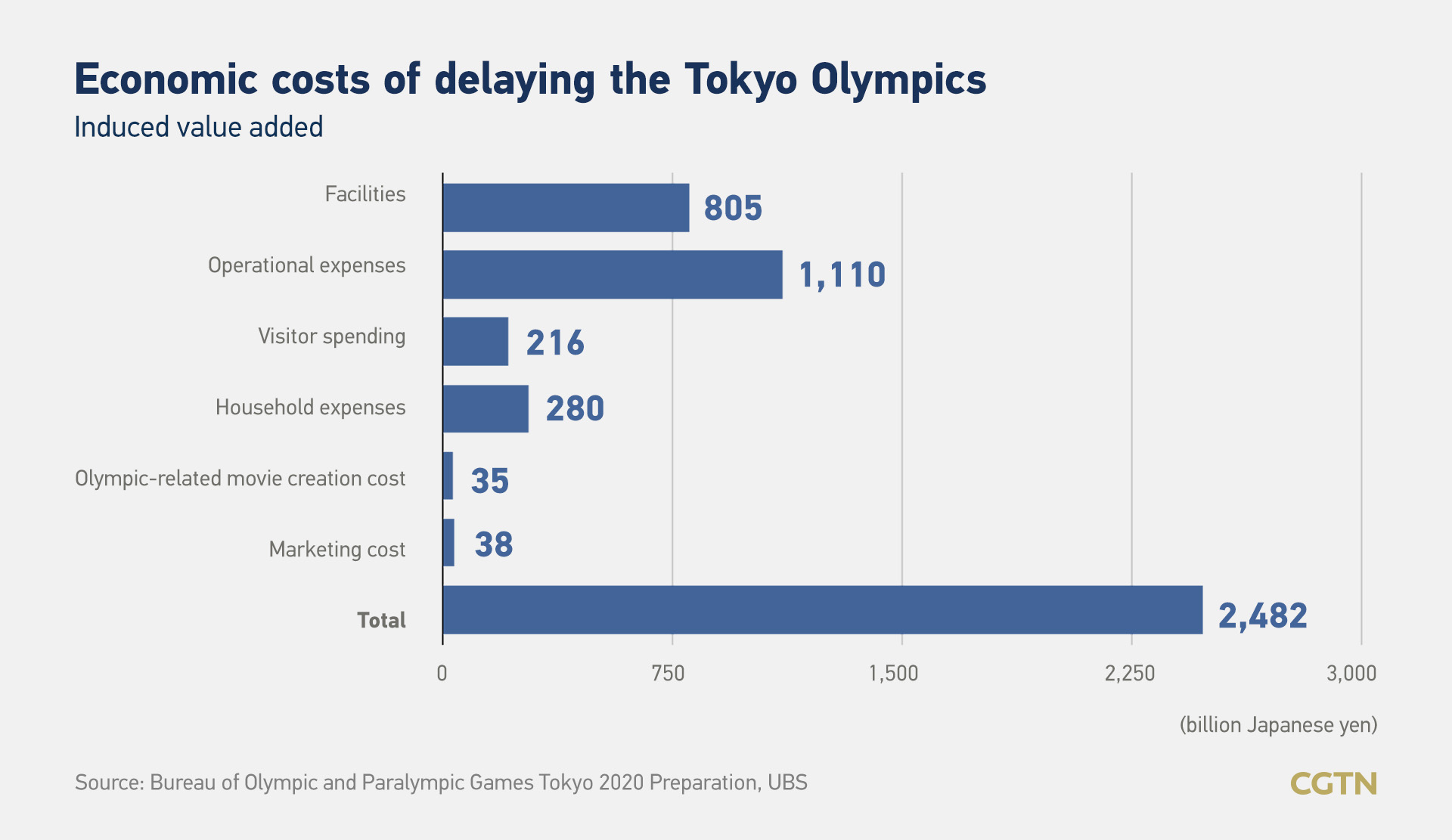 Hosting Olympics not a magical boost to Japan's economy

Japan's economy is already stagnating, and demand for construction investment and the number of tourists to Japan, which are seen to give big boost to the economy during the Olympics, will not change the situation that much.

Construction investment is likely to peak two to three years prior to the event. In other words, most of the gains in growth from the Olympics have already been reaped.

"We confirm that construction demand in Tokyo has already peaked," said Go Kurihara and Masamichi Adachi, economists at UBS.

Additionally, the number of overseas visitors to Japan is falling precipitously due to the coronavirus outbreak and is expected to see a sharper drop. 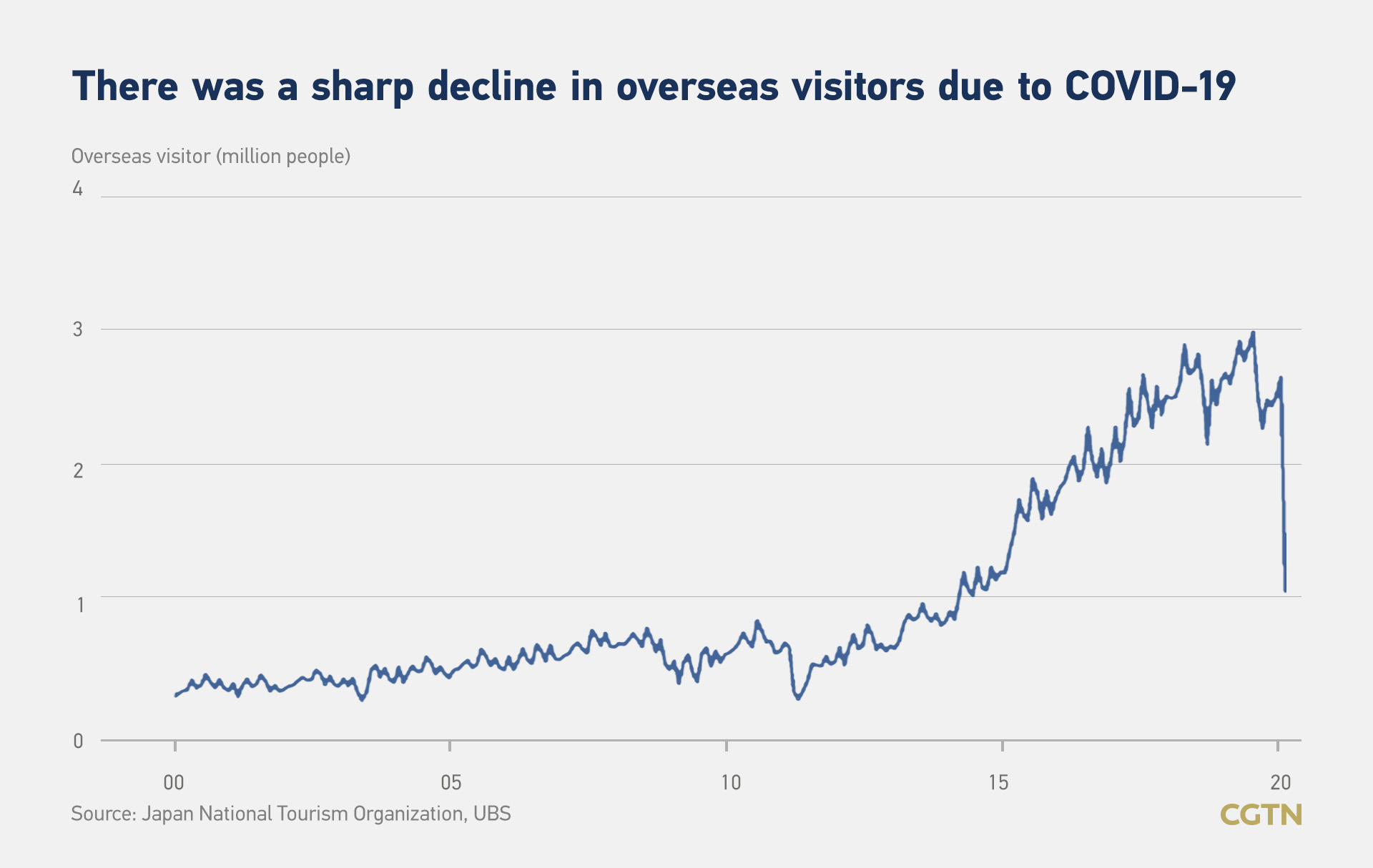 Historically, looking at trends in countries that have held the Olympics, there was no significant increase in foreign visitor numbers while the Games are being held. Indeed, visitor numbers even declined in some instances, the UBS report said.

"This could reflect regular foreign tourists putting off travel due to concerns about congestion and higher travel costs during the Olympics. At any rate, the sharp falloff in foreign visitors to Japan due to COVID-19 will overshadow any impact from whether or not the Olympics are held," Kurihara and Adachi said.

Olympics not necessarily a revenue generator

Developed countries that have hosted the Games since 1992 – Spain, Australia, Greece and the UK – showed above trend economic growth in the one to two years before the Olympics, but this drops out during the year of the Olympics. In fact, growth underperforms the trend by 0.1 percentage points. 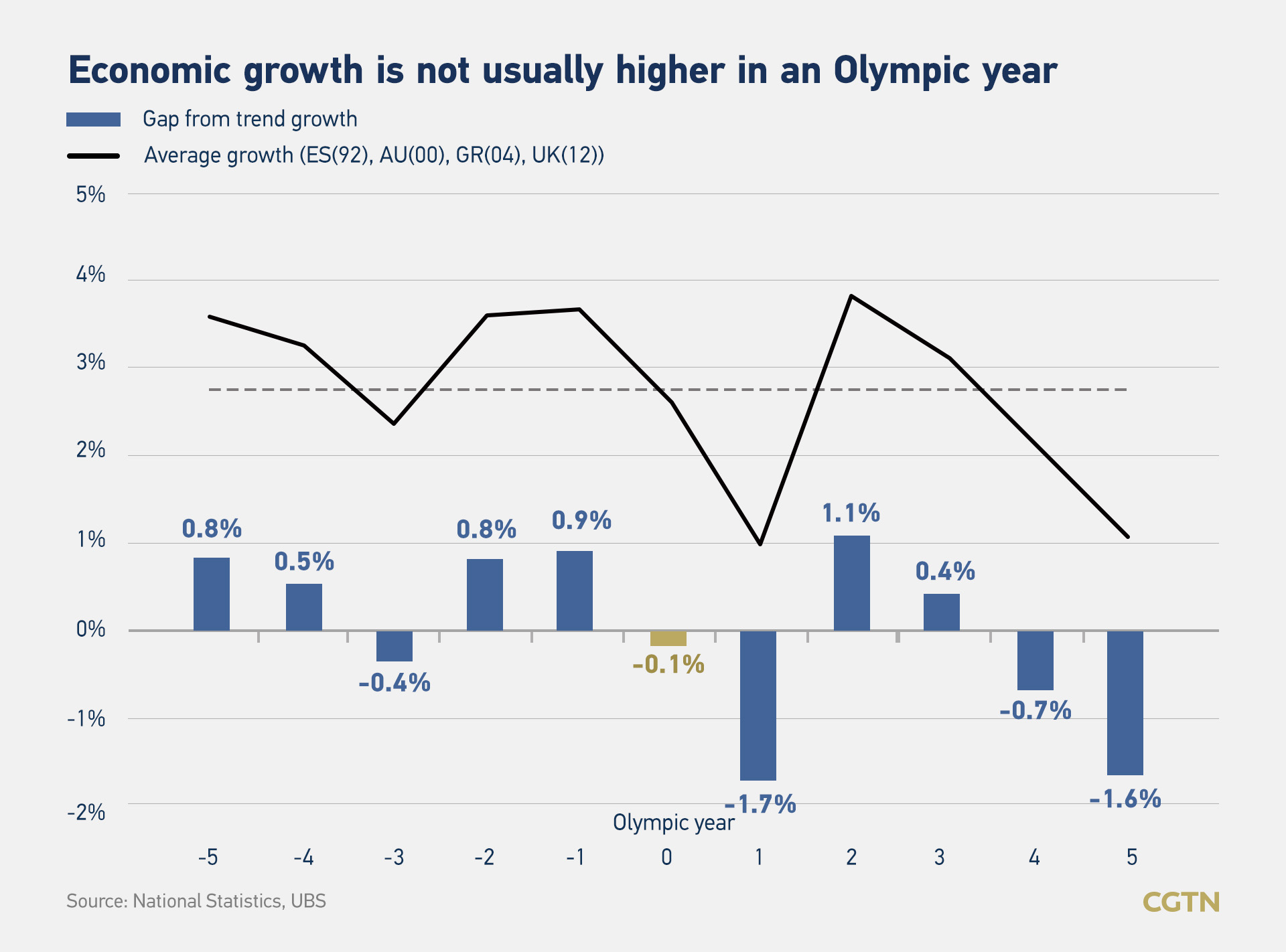 "We believe this suggests that the Olympics does little do boost growth, meaning that canceling the Games just prior to opening is unlikely to hurt the economy much in the short term," Kurihara and Adachi said.

Additionally, Bent Flyvbjerg, professor of major programme management at Oxford University, argued that the cost of winter and summer Olympic Games have always overrun and the hosts have consistently overestimated the benefits they would accrue, dating back the games to 1960.

"The Olympics itself does not boost economic growth. However, successfully pulling off such a major event can help society as a whole to regain confidence. From the economic perspective, we believe postponing the Olympics is less negative than canceling the event," Kurihara and Adachi said.