How coronavirus could change European politics
By Justina Crabtree Europe today is unrecognizable from the continent it was at the beginning of the year; the novel coronavirus outbreak has resulted in citizens hiding in their homes, economic panic and the resurrection of national borders. The pandemic has caused seismic upheaval and could have a longer lasting impact on Europe's multiparty political landscape.

Rallying around the flag

Public support for Europe's leaders amid the coronavirus crisis has increased, in line with global trend. About 51 percent of French people "have confidence" in President Emmanuel Macron, according to a Harris Interactive poll for LCI television published on March 20. This is a 13 point jump on the previous month, and a high in more than two years. Meanwhile, German Chancellor Angela Merkel and Italian Prime Minister Giuseppe Conte have also received approval ratings of over 70 percent over their management of the pandemic.

The trope of nations rallying around the flag, united in their fight against a common, external threat, prevails in Europe. Combative and extra visible leaders, hence Macron's "we are at war" speech in mid-March and typically reserved Merkel's first televised address to the German nation during her near 15 years in office on March 18, have helped garner confidence in governments. 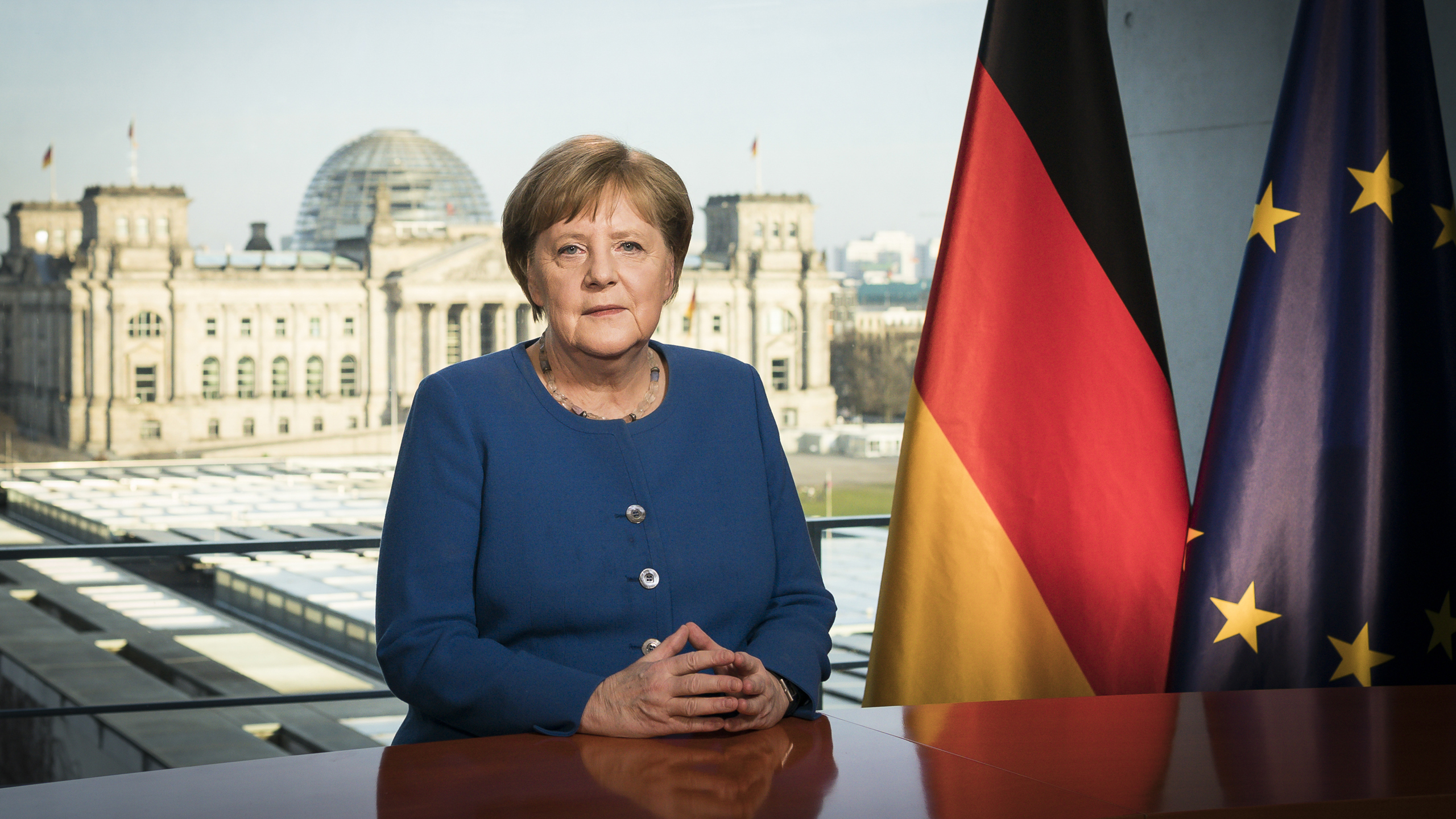 German Chancellor Angela Merkel poses for a photo during the recording of her first direct televised address to the nation in over 14 years in power, in Berlin, Germany, March 18, 2020. /German government via AP

German Chancellor Angela Merkel poses for a photo during the recording of her first direct televised address to the nation in over 14 years in power, in Berlin, Germany, March 18, 2020. /German government via AP

But, conventional wisdom on winning elections still holds, according to Constantine Fraser, European political analyst at research firm TS Lombard. "Whether that bounce is sustained will depend on (leaders') ongoing handling not only of the rest of the outbreak, but of the economic recovery further down the line," he told CGTN.

The expansion of state provisions necessitated by the virus outbreak need not mean a return to leftist politics, according to Douglas Webber, a France-based professor of political science at international graduate business school INSEAD. Globalism and market economies are here to stay, and political parties either side of the spectrum espouse this, he told CGTN.

But, other changes could be on the cards. Nationalist and national-populist parties could spin the coronavirus pandemic in their favor, "(arguing) that the crisis has been caused or exacerbated by the free movement of people and/or the reliance on cross-border supply chains that have left countries... with shortfalls of critical medical supplies that are no longer manufactured nationally," INSEAD's Webber said. 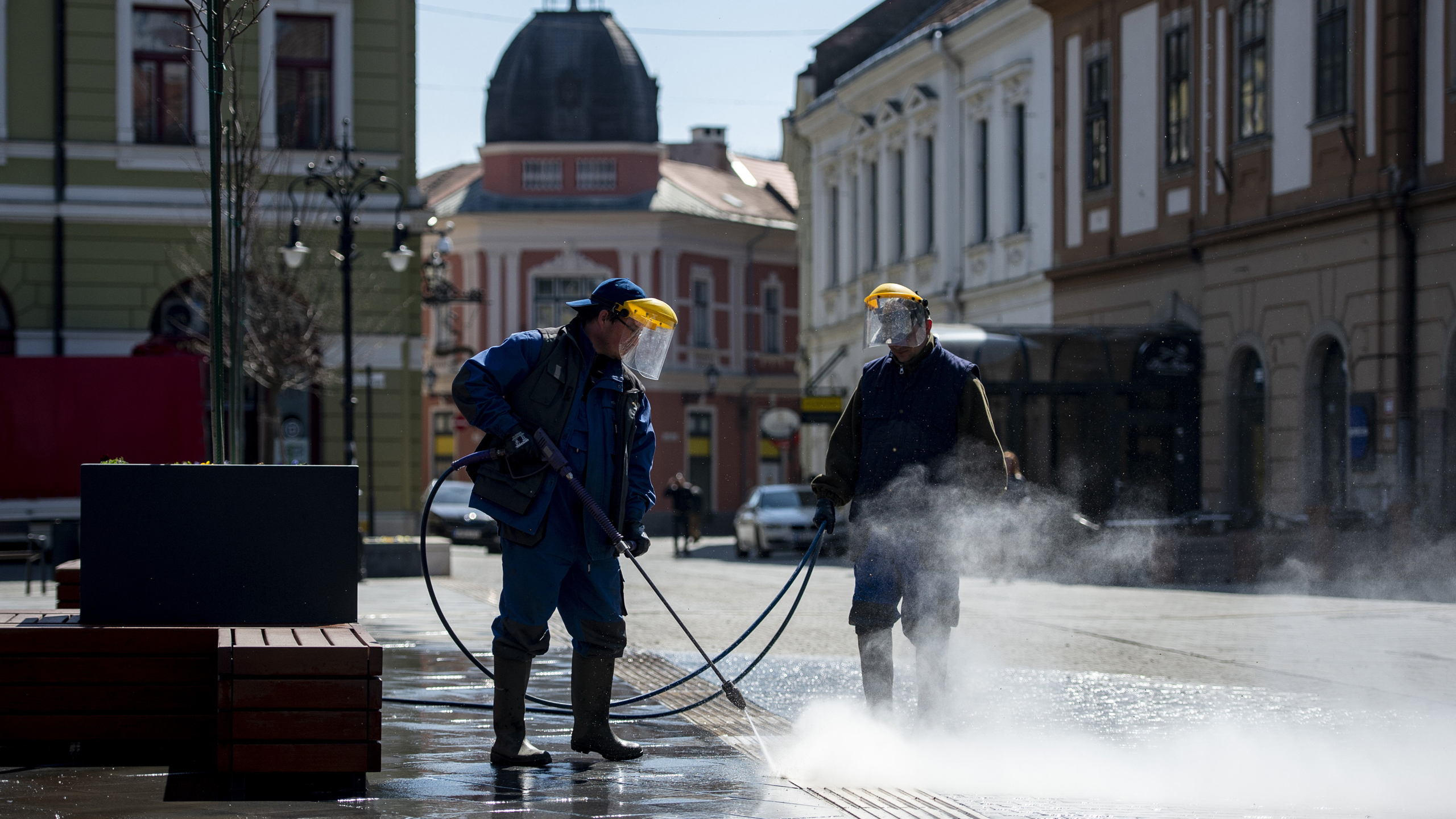 Workers use high pressure hot water to wash the pavement to curb the spread of the novel coronavirus in the main square of Eger, a city in north Hungary, April 2, 2020. /AP

Workers use high pressure hot water to wash the pavement to curb the spread of the novel coronavirus in the main square of Eger, a city in north Hungary, April 2, 2020. /AP

French Minister of Finance Bruno Le Maire last week called for "economic patriotism," encouraging the nation's supermarkets to "stock French products." Meanwhile, Germany banned the export of medical supplies in early March, though it has since lifted this restriction.

The European Union (EU), for its part, has pushed back against a fracturing of this sort. "In a crisis, the human instinct is often to turn inwards, to close borders and fend for yourself," wrote Josep Borrell, the EU's representative for foreign affairs, in a blog post on March 24.

"After the first wave in which national authorities took centre stage, now the EU is coming to the fore with joint actions on all tracks where member states have empowered it to act: with joint procurement of vital medical equipment, with a joint economic stimulus and a necessary relaxation of fiscal and state aid rules," Borrell detailed.

Hungary could set the tone

Hungary's parliament on Monday granted nationalist Prime Minister Viktor Orban the right to rule by decree as the country battles the coronavirus pandemic, a move with no specific time limit for when these extra powers will be lifted. The new legislation also imposes jail terms of up to five years on those hindering measures to curb the virus' spread or sharing false information. 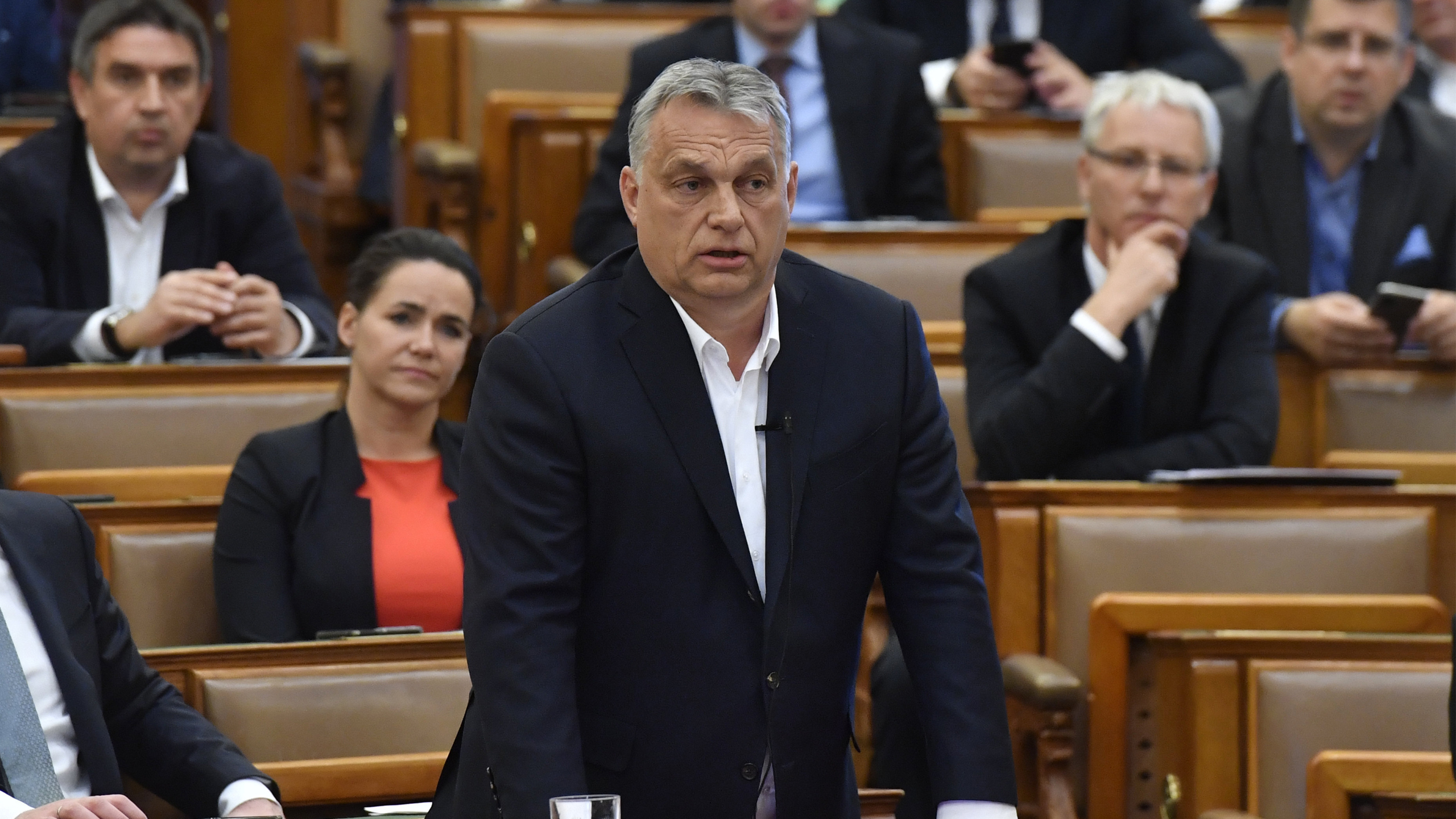 "If Orban is allowed to get away with the extreme measures he has introduced it will inevitably make it more tempting for other governments to follow in his footsteps," said TS Lombard's Fraser.

But speaking in a televised interview on Friday, the Hungarian leader defended the new legislation against critics, whose views he referred to as a "political attack."

Top down leadership is being exercised across the board in the fight against coronavirus. Countries across the globe have declared states of emergency, which can allow for the suspension of normal legislative processes. At present, strict measures to curb the spread of the virus appear to be supported, or at least tolerated, by most European citizens.

"Where... liberal democracy has not had the time to develop very strong roots, as in post-Communist Europe, there is a genuine danger that this trend (autocracy) will not be reversed but rather continue. This in turn would prove to be a big threat to the cohesion of the European Union – which it is not well equipped to deal with," Webber said. 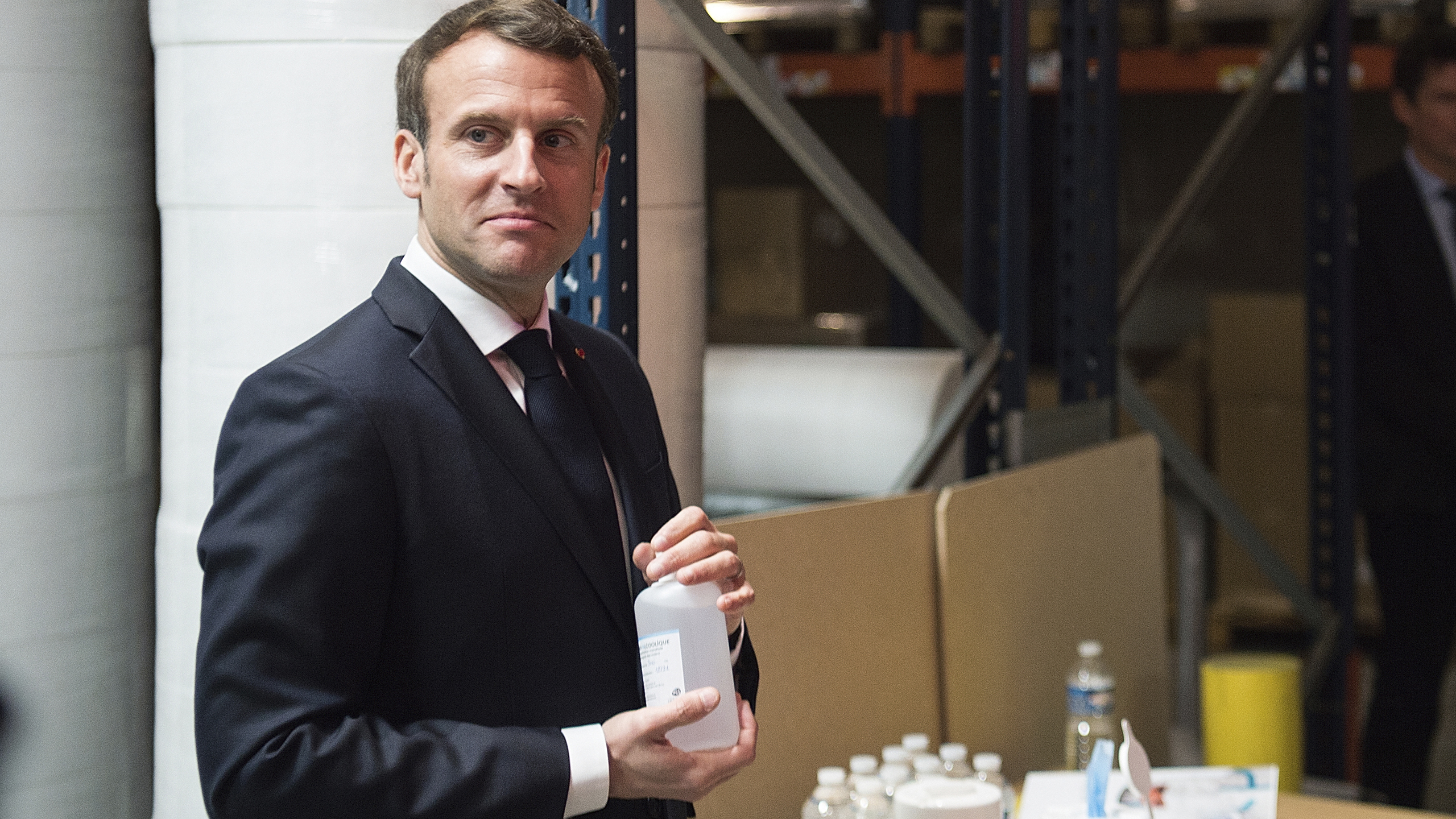 Big data has played a role in curbing the pandemic, for example helping to convey messages to the public and tracking confirmed coronavirus cases.

The European Union is beginning to harness such technology. On Wednesday, a group of European technology experts said that they were soon to launch a scheme for smartphones to help track those who had come into contact with people infected with coronavirus.

Typically, the EU's stance on big data and big tech is not the most welcoming; the 27-nation group is known for its measures safeguarding consumers' privacy and reducing corporate and governmental surveillance.

Regulations within the EU are "currently some of the strictest in the world," said Fraser. The extent to which the bloc's urgency in combating the virus, which has killed over 10,000 people in both Italy and Spain alone, causes a shift in attitudes is "a real unknown," he said.