What is a 'state of emergency'?
By Le Tian 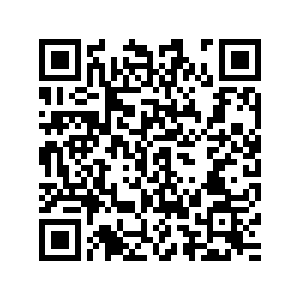 The leaders of at least 70 countries have declared states of emergency to invoke extra powers to contain the spread of COVID-19.

The virus outbreak has now been confirmed in over 200 countries, has sickened more than a million people and killed more than 51,000 people globally.

Under the situation of a state of emergency, governments are empowered to enforce measures that would normally not be permitted, which might include the right to impose curfews, lock down cities and prevent mass gatherings.

Here is a breakdown of how different governments exercise their emergency power. 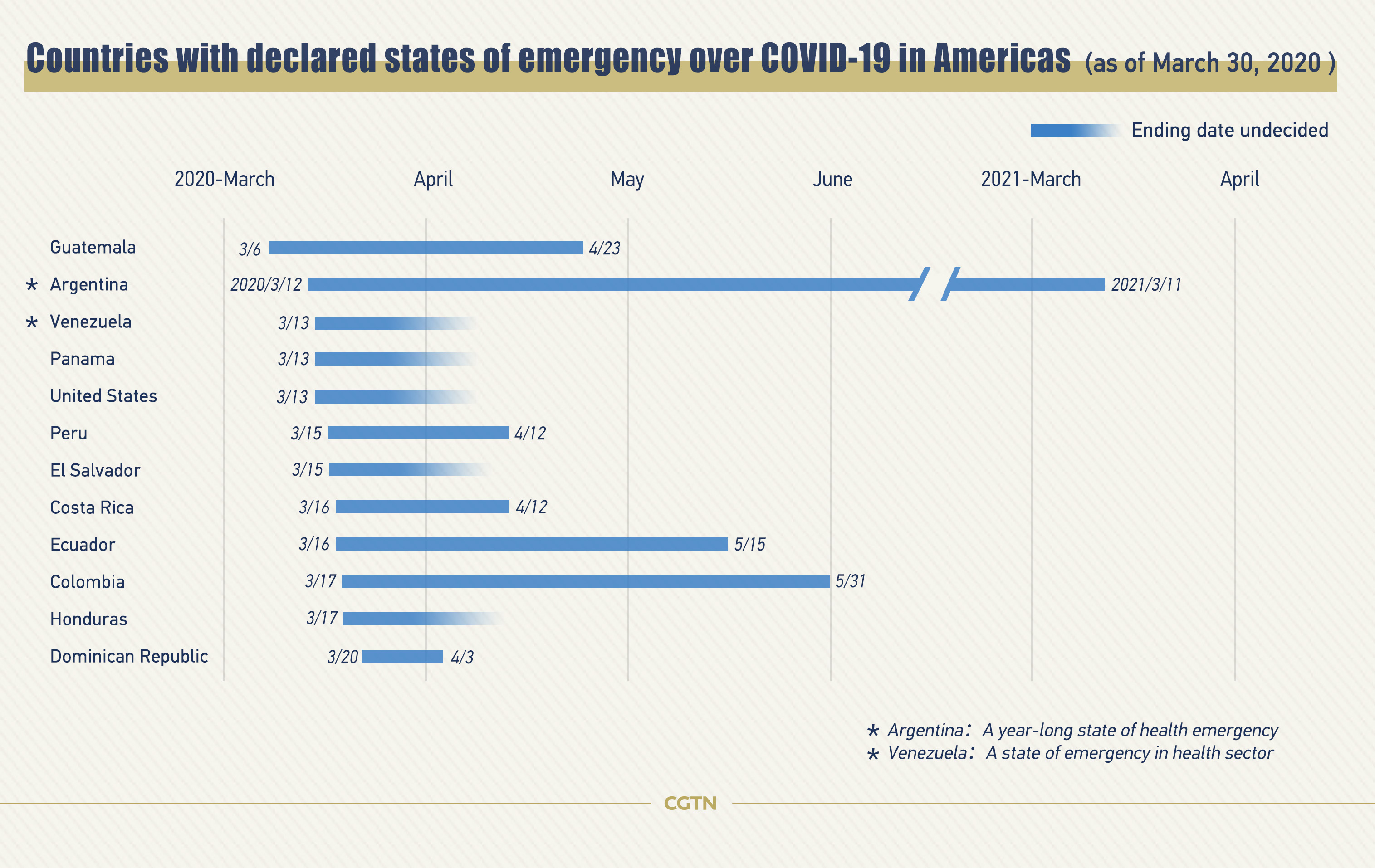 The United States now has most confirmed cases of COVID-19, with the number surpassing 200,000 on Wednesday.

By invoking the Stafford Act, U.S. President Donald Trump declared a national emergency on March 13 and announced a set of special measures such us freeing up 50 billion U.S. dollars in financial resources and setting the Federal Emergency Management Agency in motion.

Meanwhile, the order confers new authorities to the Department of Health and Human Services. Specifically it will be able to submit waivers to establish alternate care sites and modify patient triage protocols and transfer procedures.

However, the Stafford Act only authorizes the president to provide federal resources to assist state government under the state of national emergency. The federal government is not allowed to directly intervene in the crisis response of the state government, nor does Trump have the authority to unilaterally implement a mandatory national lockdown.

More than 20,000 COVID-19 cases were confirmed in Latin America and the Caribbean by Friday, double the figure a week ago. Countries are moving to impose curfews to slow the spread of the coronavirus after announcing a state of emergency.

Guatemala as the first country in the region to declare the state of emergency imposed full-day curfew on March 25.

Peru has restricted public movements by gender: Men will only be allowed to step outdoors on Mondays, Wednesdays and Fridays, while women are allowed to be out on Tuesdays, Thursdays and Saturdays. No one is authorized to leave home on Sunday.

In Colombia, the government has ordered that people over 70 have to stay home until the end of May. 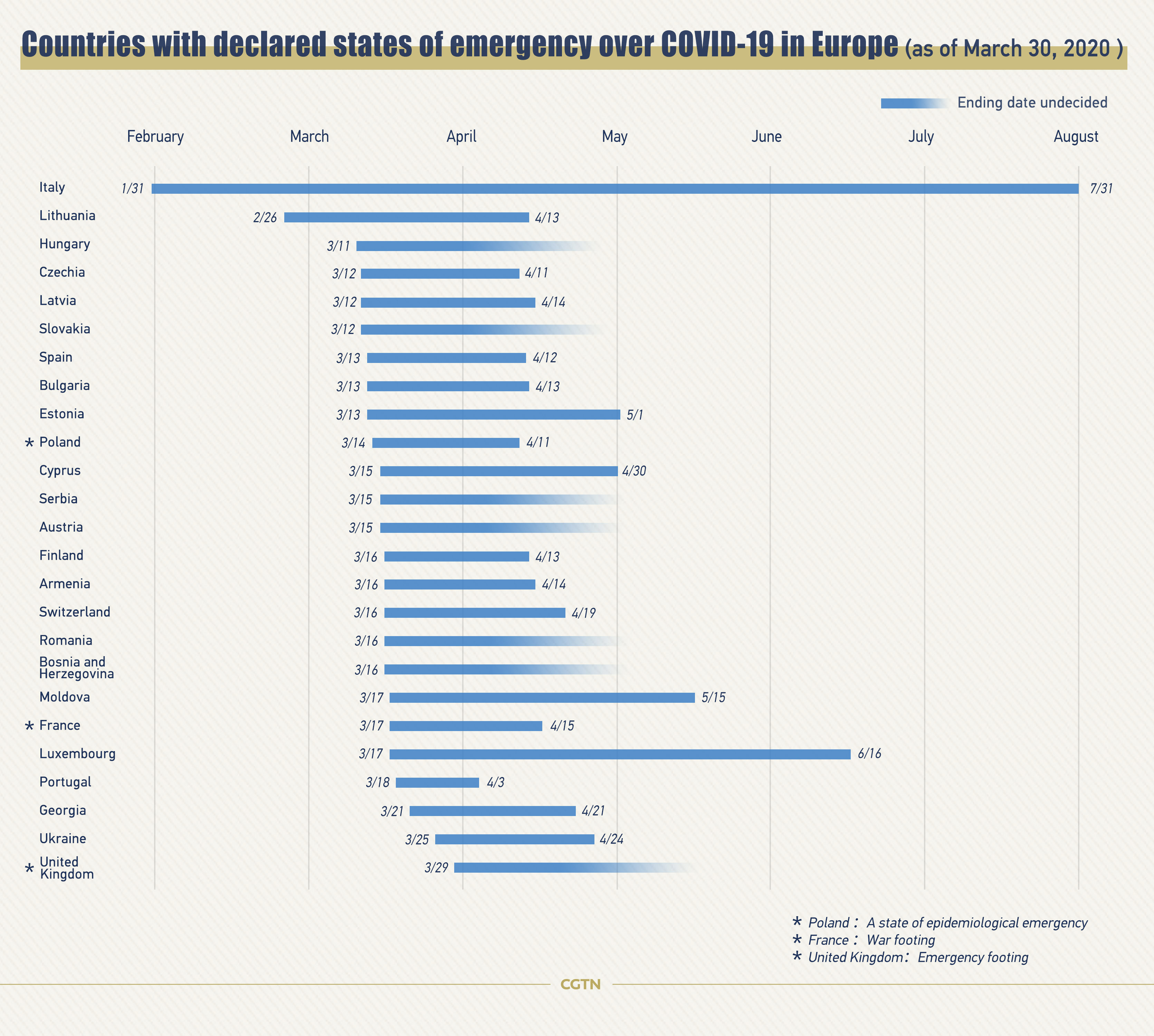 The World Health Organization (WHO) has said that Europe is a now epicenter of the COVID-19 pandemic. The number of confirmed cases in Italy, Spain, France, Germany, and the UK, the worst-hit counties in the region, reached 400,000 on Friday, while the death toll exceeds 30,000.

Article 15 of European Convention on Human Rights (ECHR) allows its 47 member countries to declare a state of emergency "in times of war or other public emergency threatening the life of the nation." Armenia, Estonia, Georgia, Latvia, Moldova and Romania have declared state of emergency under Article 15.

The clause does not specify the time limits of the state of emergency and does not introduce measures governments can adopt. Latvia has prohibited exports of medicines needed during its state of emergency while Armenia has banned public events and mass gathering with over 20 people.

Italy and Spain have not invoked the ECHR mechanism but instead declared state of emergency based their own constitutions. According to their laws, the declaration must be subject to review by its legislature. Spain has to renew the state of emergency every 15 days.

Since the country reported its first COVID-19 case January 31, Italy declared that it was entering a six month long state of emergency.

The central government was given the authority to take over some regional authorities' executive power and is able to impose emergency measures nationwide.

Portugal declared a 15-day state of emergency March 18, the first of its kind in the Portuguese history and on Thursday announced that it was extending the situation by another 15 days.

The Portuguese government is now empowered to take more restrictive measures including banning public gatherings more than five people, closing all airports to commercial flights and banning domestic travel. But, government-proposed financial support measures are still on hold in the legislature. The WHO on Wednesday warned that the COVID-19 pandemic is "far from over" in the Asia Pacific region. Australia declared an emergency on March 18 by calling COVID-19 a "human biosecurity emergency."

Such a declaration allows Prime Minister Scott Morrison to impose curfews, order residents to quarantine and close off cities and regions, if necessary.

A curfew has not been imposed yet but the government has ordered limiting group gatherings outside to two and instructed the police to issue fines up to 11,000 Australian dollars (about 6,672 U.S. dollars) to those who violate the restrictions.

Pacific Island nations like Samoa, Tonga and Papua New Guinea with limited resources and with fragile health systems joined the list of countries that also declared state of emergency.

Following the declaration, these countries all imposed lockdown measures.

South Korea entered into its own state of emergency on March 3 when President Moon Jae-in declared "war" against the pandemic and ordered all government agencies to be on 24-hour alert and to boost their emergency response systems.

Thailand is one of the latest Asian country to have announced a state of emergency. The emergency decree barres foreign travelers to Thailand and has forbidden the hoarding of food, drinking water and medical supplies. People older than 70 are ordered to be quarantined at home. 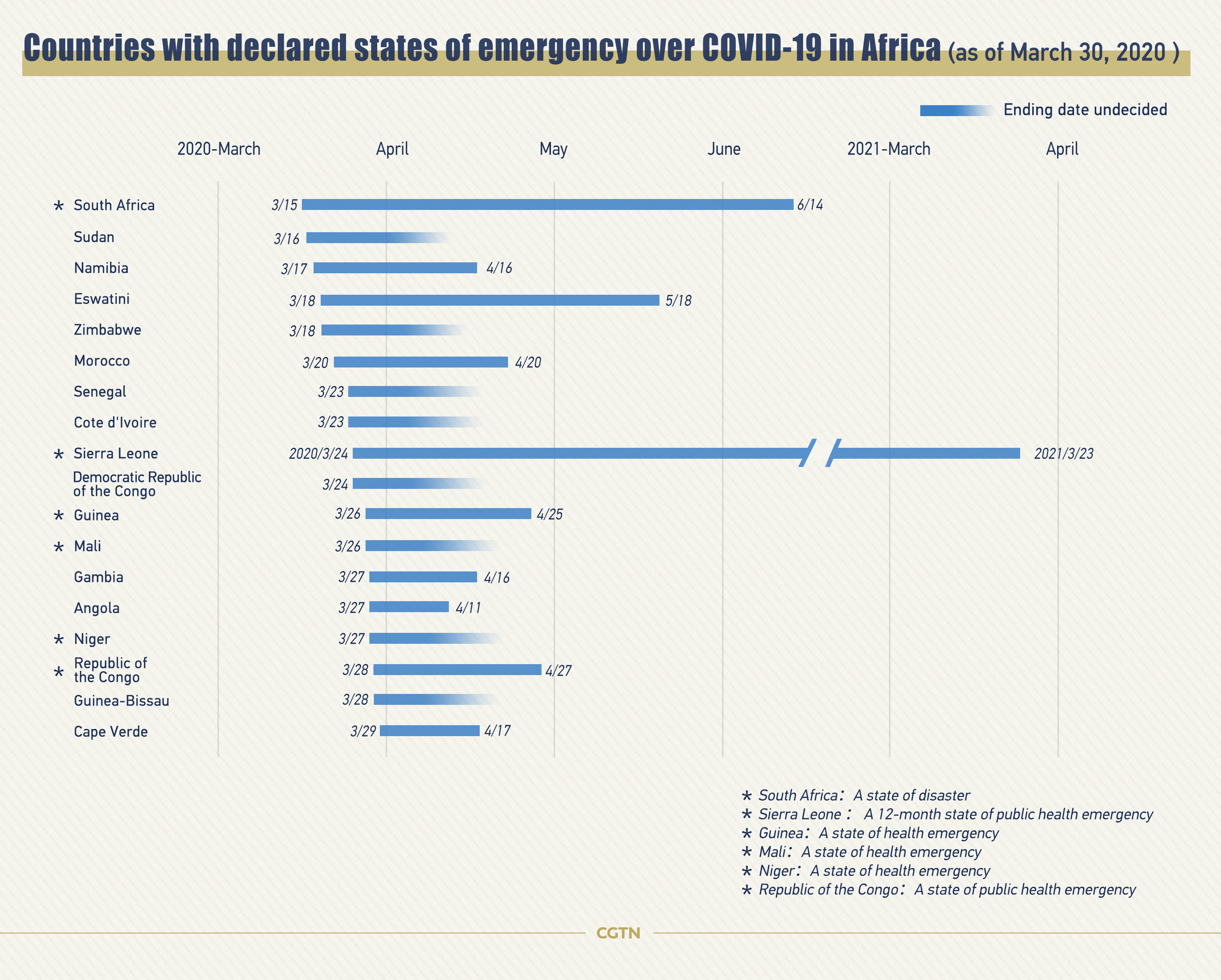 50 countries in Africa have reported COVID-19 confirmed cases with the number climbing above 7,000 as of Friday and only four countries have not yet recorded any cases.

Facing the grave risks, many countries decreed a state of emergency. Senegal, Kenya, Cote d'Ivoire and Niger have all taken the route and adopted curfews.

Sierra Leone, which has just recovered from 2014 Ebola epidemic, declared a 12-month public health emergency even before the country confirmed its first case.

A lockdown has not been ordered yet but the country said that it was deploying its armed forces and police to enforce compliance with all public health directives.

South Africa also a imposed nationwide lockdown after declaring its "state of disaster."

The declaration allows the government to issue regulations to control the movement of people and goods, as well as emergency accommodation and the sale of alcohol.

The country has also closed 35 of its 72 land border crossings and two of its eight sea ports.

The Middle East is also a hotspot for infection with Iran in the epicenter of the regional outbreak.

Palestine was the first in the region to declare a state of emergency. President Mahmoud Abbas announced the closure of all schools, colleges and kindergartens and cancelled foreign tourist reservations.

Jerusalem's Church of the Holy Sepulcher is also closed for the first time in nearly 700 years history.

The public's movement hours in all West Bank cities are reduced to between 10 a.m. and 5 p.m., and all the stores should close after 5 p.m except for pharmacies.

Israel also declared a state of emergency with a seven-day mandatory lockdown. People are prohibited from visiting parks, pools, beaches and museums. It is also mandated that they limit social interactions and work from home where possible.

Not a full shutdown was ordered as government said "essential" busineses including supermarkets, pharmacies and medical facilities will remain open.