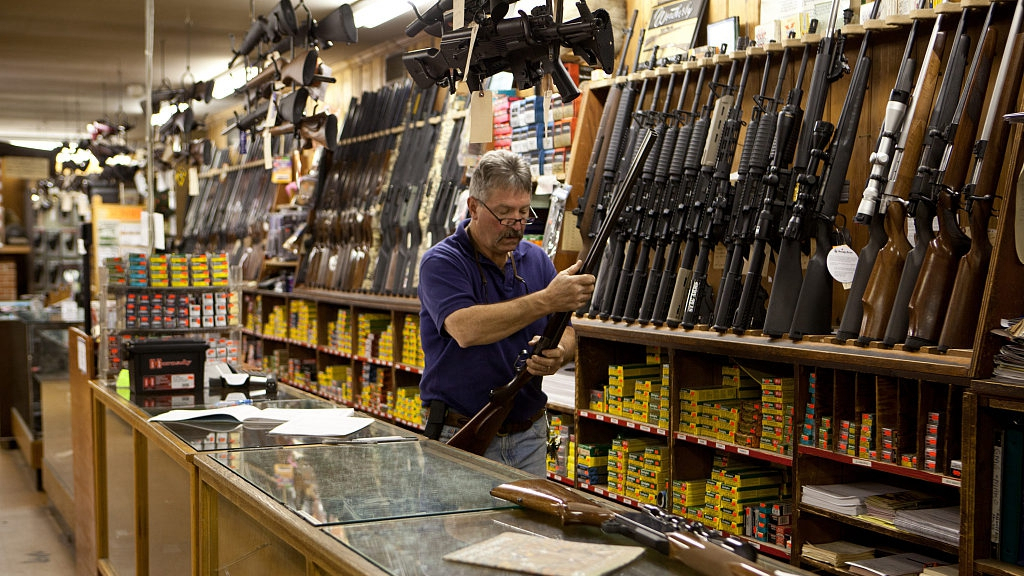 Editor's note: Ian Buruma is the author, most recently, of A Tokyo Romance: A Memoir. The article reflects the author's opinions, and not necessarily the views of CGTN.

Spooked by COVID-19, Americans not only stripped supermarket shelves of toilet paper and pasta, but also drove gun sales higher than ever. Apparently, many of these recent gun buyers never purchased a firearm before.

Lobbyists for the U.S. gun industry want gun stores to be counted as "essential" businesses, like food shops and pharmacies. A number of states have readily complied, as has the Department of Homeland Security. Jay Pritzker, Governor of Illinois, declared that "firearm and ammunition suppliers and retailers, for purposes of safety and security" should indeed be allowed to continue supplying these alleged necessities.

When it comes to guns, the rest of the world has long viewed the United States as being a little crazy. But there is something particularly odd about this latest rush to buy arms. Conservatives and gun lovers invoke history, tradition, and the late-eighteenth-century text of the U.S. Constitution to defend their right to carry anything from a Glock G-19 pistol to the popular AR-15 assault rifle. In fact, until very recently, the common interpretation of American legal scholars was that gun-buying by individuals to "defend his or herself, their family, as well as their home, business, and property," as Lawrence Keane, senior vice-president of the National Shooting Sports Foundation, barely managed to put it, was far from the U.S. founders' intent.

The drafters of the U.S. Constitution's Second Amendment insisted in 1791 that: "A well-regulated militia, being necessary to the security of a free State, the right of the people to keep and bear Arms, shall not be infringed." The origin of this right goes back to the aftermath of the Glorious Revolution in England, when Protestant militias were authorized to bear arms to protect Parliamentary rule from a tyrannical monarchy.

In the U.S., too, militias of armed citizens were considered a necessary bulwark against a despotic federal state. The potential enemy was what President Donald Trump and his supporters like to call "the deep state," an overweening federal government that should never be allowed to trample on the rights of freedom-loving people.

This is quite different from the motives of people buying assault rifles to defend "his or herself" in the age of COVID-19. What is most feared now is not the government, but lawlessness from a collapsing economy in a health crisis.

Such anarchy would resemble the "war of all against all" that Thomas Hobbes, traumatized by the English Civil War, warned against in the seventeenth century. To preserve the peace and a civilized society, Hobbes argued in Leviathan, citizens must hand over sovereignty, and thus the right to use force, to an almighty state. Democracies today are not almighty, but they do claim a monopoly on the legitimate use of force – as do dictatorships, of course.

The U.S. is the great exception. True, President Jair Bolsonaro of Brazil would like to emulate the U.S.. Even though most Brazilians oppose private gun ownership, Bolsonaro tweeted recently: "The right to legitimate self-defense cannot continue to be violated!" More guns were sold in Brazil in the first year of Bolsonaro's rule than ever before. More murders are committed with guns in Brazil than in most countries, too.

The U.S. federal government, in any case, was never trusted with a monopoly on the use of armed force. But for the most part, efforts were made – not always successfully, to be sure – to limit violence by restricting the types of guns people could own and the types of people who could own them. Until the 1970s, the National Rifle Association was an organization of gun enthusiasts that focused on firearms safety. 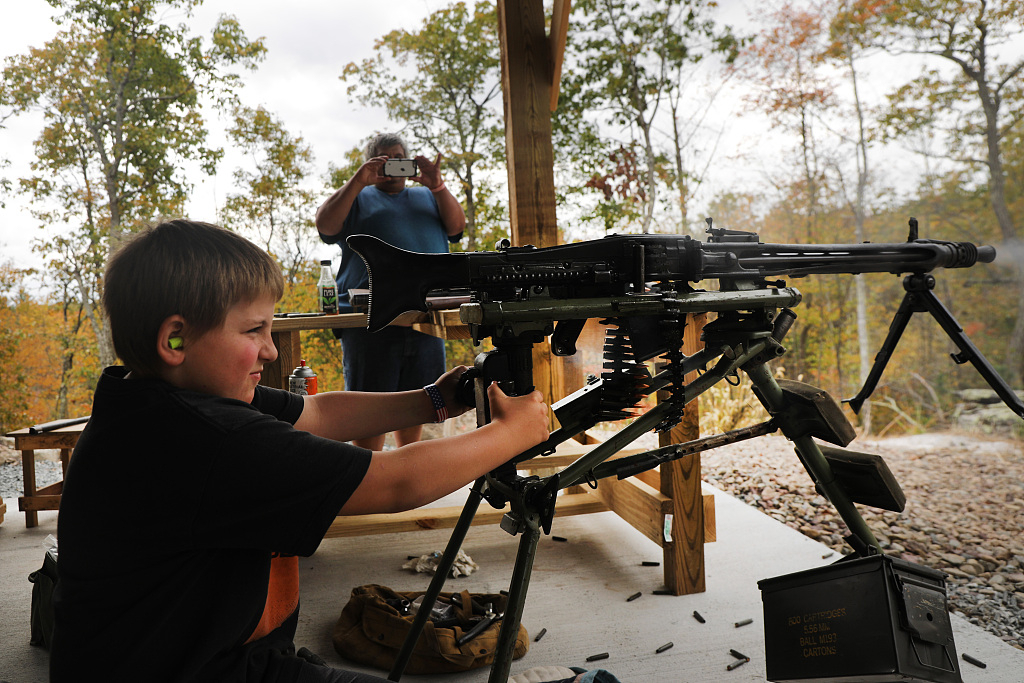 A young boy shoots an AR-15 rifle at the "Rod of Iron Freedom Festival," billed as a "Second Amendment rally and celebration of freedom, faith and family," in Greeley, Pennsylvania, October 12, 2019. /VCG Photo

A young boy shoots an AR-15 rifle at the "Rod of Iron Freedom Festival," billed as a "Second Amendment rally and celebration of freedom, faith and family," in Greeley, Pennsylvania, October 12, 2019. /VCG Photo

Various efforts were made over the years to expand the Second Amendment to recognize the right of individuals, and not just militias, to bear arms. When a bank robber named Luke Miller challenged a federal gun regulation in 1934 that controlled buying and selling of machine guns across state borders, the NRA supported the Supreme Court decision to stick to the original interpretation of the Constitution and allow the regulation to stand.

But then the NRA, provoked by one of those periodic panics that drive so many Americans to seek guns, switched its position to become a radical proponent of private gun ownership. And when large numbers of Americans panic, race is usually in the background.

Frightful violence was unleashed by gun-toting Ku Klux Klan members beginning in the 1860s, when white southerners sought to restore the racial hierarchy upended by the end of slavery and Reconstruction in the former Confederate states. This resulted in paranoid rhetoric about black men threatening white property and women; shootings and lynching followed.

Echoes of this resounded in the 1970s, when white resistance to court-ordered school integration peaked. Indeed, what really pushed the NRA into active politics and lobbying an individual right to carry guns was the expansion of civil rights for African-Americans under President Lyndon Johnson. This triggered the flight of southern Democrats to the Republican Party, the active involvement of evangelical Christians in right-wing politics, and the demand for a new interpretation of the Second Amendment. Images of Black Panther revolutionaries taking up arms to defend themselves against racism seemed to confirm many whites' worst fears.

Years of lobbying and cajoling by the NRA, and the steady radicalization of the Republican Party, finally paid off in 2008 when five right-wing Supreme Court justices ruled (against the other four) that the Second Amendment guarantees the right of individuals to carry guns to protect "hearth and home."

The "war" against COVID-19, belatedly declared by Trump, is not on the surface the same thing as racial resentment of minorities. But fear of lawlessness is fear of poor and desperate mobs, deprived of jobs and health care. It is fear of a war of all against all – or perhaps not quite all.

Fearful people, not only in the U.S., seek scapegoats, and they are usually people who look different. They could be black. They could be Asian. As Hobbes rightly concluded from his experience of civil war, an armed society is the worst possible outcome. Under a president who thrives on stoking division, it is a prospect that should scare us all.