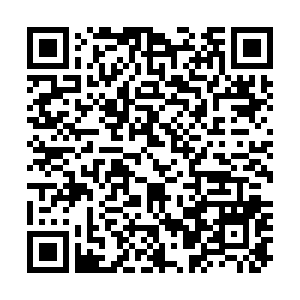 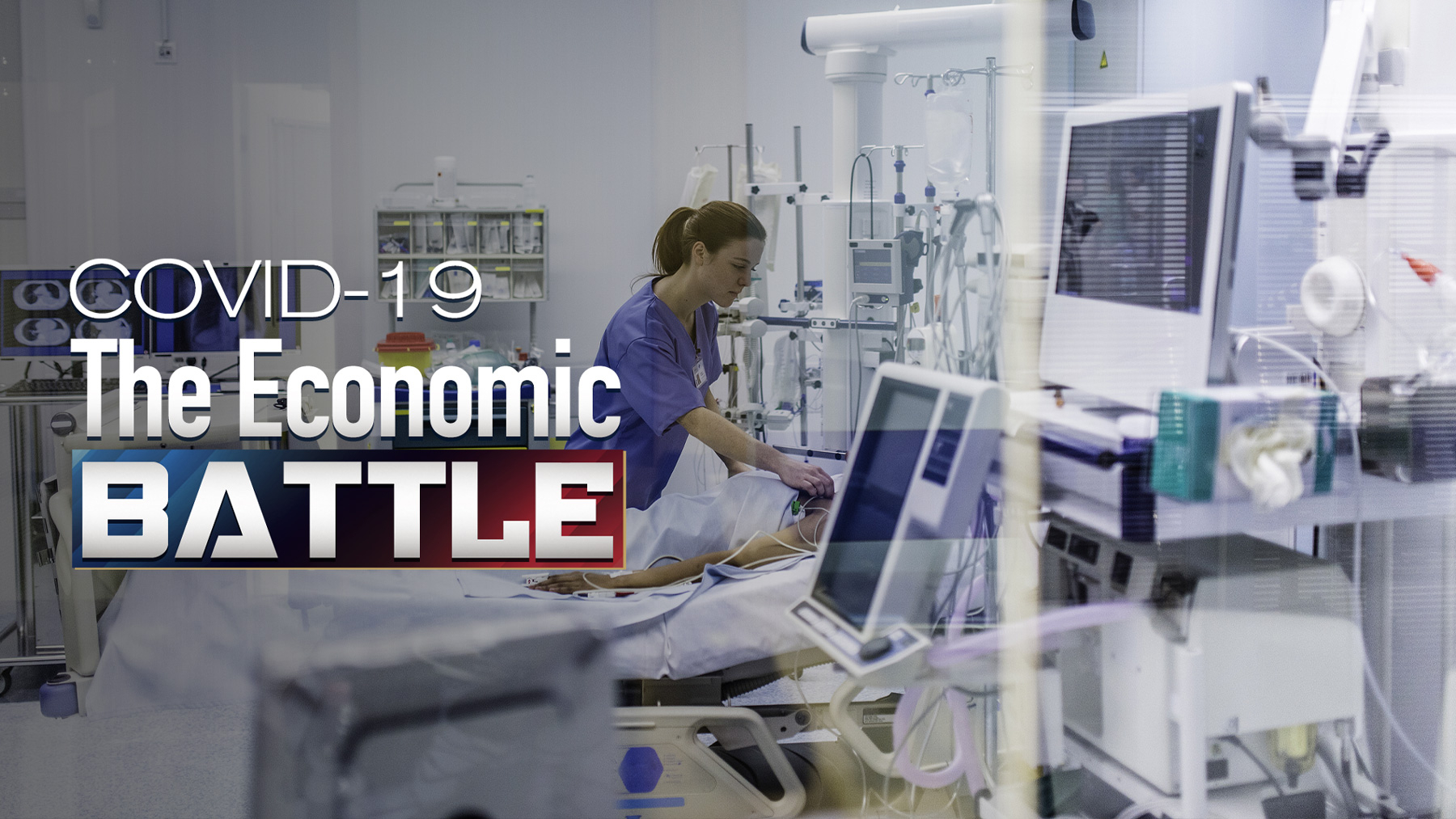 Chinese ventilator manufacturers are ramping up production to expand supply to other countries as demands from abroad surge in the time of COVID-19 pandemic.

Ventilator, a breathe-assisting device, is currently the most needed alongside medical masks, protective suits and goggles amid global pandemic control efforts.

About 880,000 ventilators are in demand globally amid the pandemic, with the United States in need of 75,000 ventilators, while France, Germany, Italy, Spain and Britain are together short of 74,000, according to GlobalData, a data and analytics company.

China, a major manufacturing hub for medical supplies, has become the source of supply for many countries across the globe as confirmed cases have skyrocketed to over 1.5 million globally.

The country has expanded its production capacity in the battle against coronavirus. Production of key medical materials including various types of ventilators has resumed as epidemic prevention and control efforts took effect domestically and over 90 percent of the major industrial enterprises in China have resumed work and production. 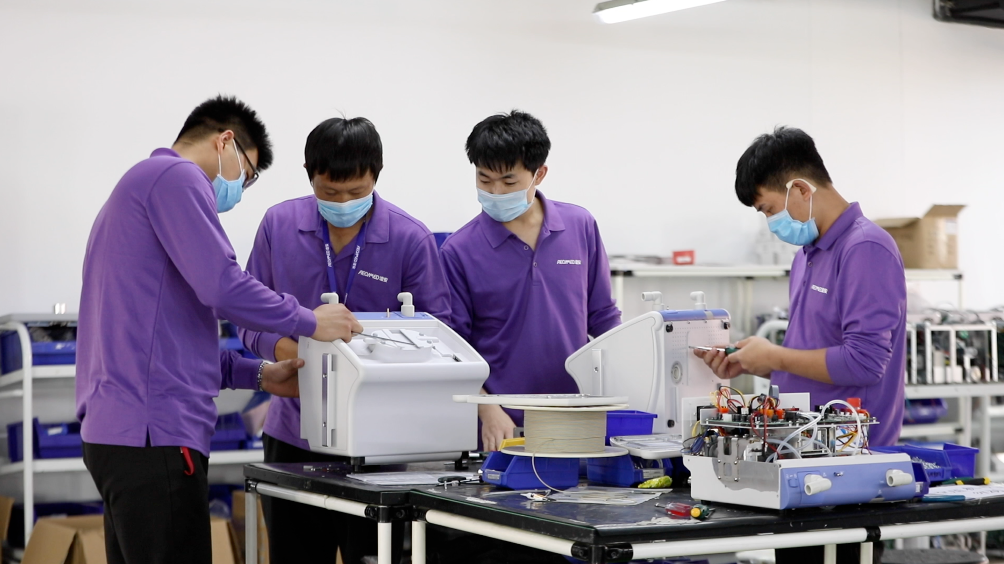 Chinese ventilator manufacturers now are working round the clock to provide support to other countries in urgent need of ventilators while ensuring domestic supply.

Aeonmed, a respiratory medical equipment manufacturer in Beijing, said it has received orders from about 40 countries and regions and has delivered more than 1,000 invasive ventilators.

Its working schedule for the signed commercial orders have been arranged to late summer. This is the same for all other companies. 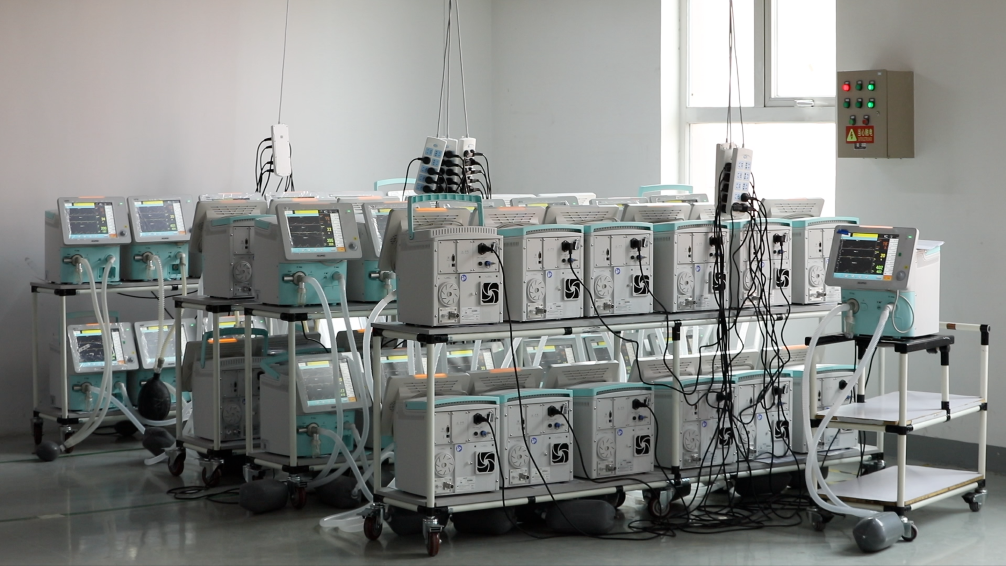 Ventilators are being tested in a production line in Hebei Province before being delivered, April 8. Zhu Zhiyu/CGTN

Ventilators are being tested in a production line in Hebei Province before being delivered, April 8. Zhu Zhiyu/CGTN

At present, the company has transformed the production lines for anesthesia machines and surgical beds into ventilators to meet the surging demand. More than 500 workers work in three shifts, and the devices are produced every 24 hours.

“We began to work on international orders in mid-March. Our workers have been trying our best to fill the demand,” He Minjie, a process engineer in the company, told CGTN.

Inspections are reinforced on all links at this particular time, from raw material storage to the finished products for the products will go to the battlefield of saving people's lives.

“Specialists are in position to ensure the production capacity as well as the quality,” another engineer named Li Xiang said.

However, making this high-end medical equipment requires time and hundreds of spare-parts and even more from the global supply chain. The spread of the coronavirus makes it difficult.

“I hope that the spare parts from other countries could increase production capacity and be delivered to us on time or even ahead of time. In that case, more ventilators could be made to combat the pandemic,” said Li Kai, a spokesperson for the company. 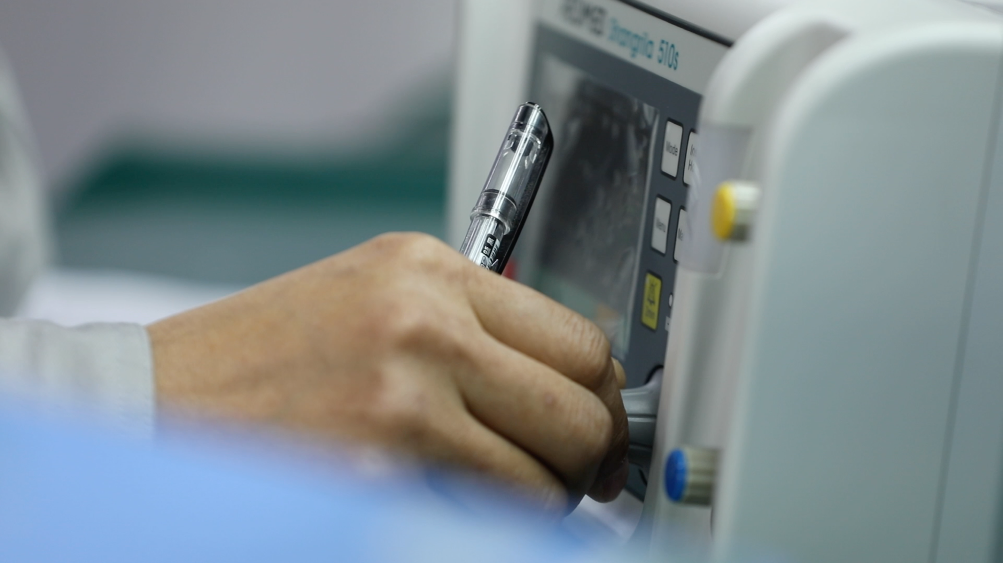 Close inspection was conducted on a ventilator in a production line in Hebei Province, April 8. Zhu Zhiyu/CGTN

Close inspection was conducted on a ventilator in a production line in Hebei Province, April 8. Zhu Zhiyu/CGTN

For BMC Medical, a company that specializes in non-invasive ventilators, the situation is the same.

“Our company, like our logistics department is thinking of ways to ease the pressure. The local government also gives us help to cope with such a production of unexpectedness, non-rest and high-intensity,” said George Zhuang, the BMC Chairman.

“Recently, we started to implement 12 supportive policies to all kinds of innovative companies, providing them with subsidies,” said an official from an innovation industrial park where companies like these breathing machine makers are based. 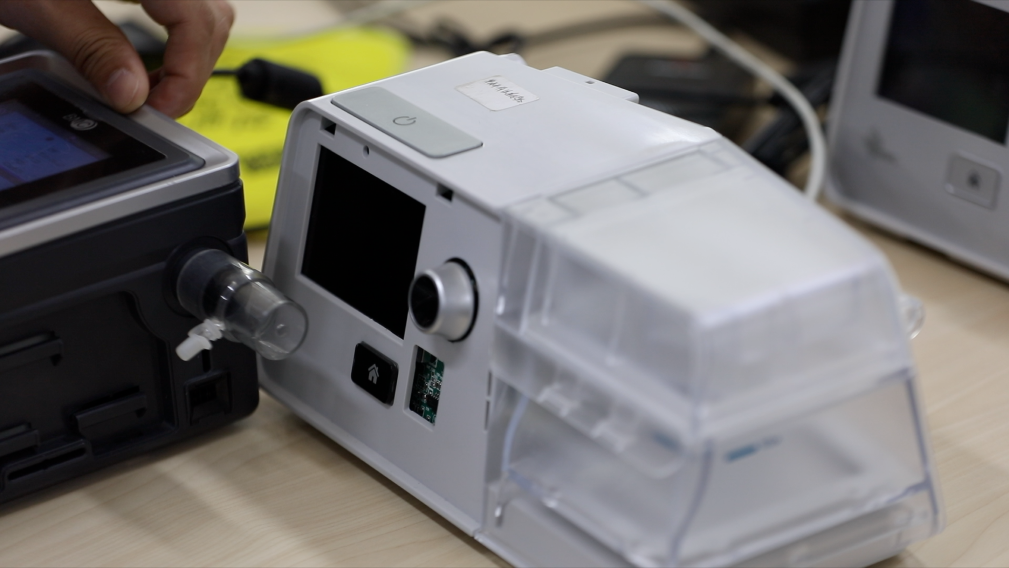 A researcher was testing a non-invasive ventilator in a lab in Beijing, April 7. Wu Jinjing/CGTN

A researcher was testing a non-invasive ventilator in a lab in Beijing, April 7. Wu Jinjing/CGTN

Yuwell, a medical equipment solution supplier, said the company has received so many overseas orders of ventilators that have been arranged in mid-May.

Although packed with orders, the company said the enhancement of capacity in a short time is hard due to the complex technology of ventilators and strict quality control requirements.

Another provider of medical devices Mindray said faced with soaring demands, the company will prioritize the needs form the worst-hit areas that are in desperate need of ventilators.

Mindray has mainly provided the life-saving devices to Europe last month. And now it has got the FDA certificate, so it will also arrange orders from the United States, the company said on the e-interaction platform of the Shanghai Stock Exchange (SSE).

Chinese enterprises have provided about 18,000 ventilators to other countries, among which over 4,000 were invasive ventilators, said Chen Kelong, deputy director of the Department of Equipment Industry of the Ministry of Industry and Information Technology (MIIT) at a press conference on Wednesday.

At present, there are 21 invasive ventilator manufacturers in China, and eight of which have obtained the CE certification, accounting for one-fifth of the global capacity, said Xu Kemin, an official with the MIIT on March 31.

About 20,000 units have been signed, and at the same time, there are still a large number of international orders being negotiated every day. Most enterprises are working in three shifts and non-stop, Xu added. 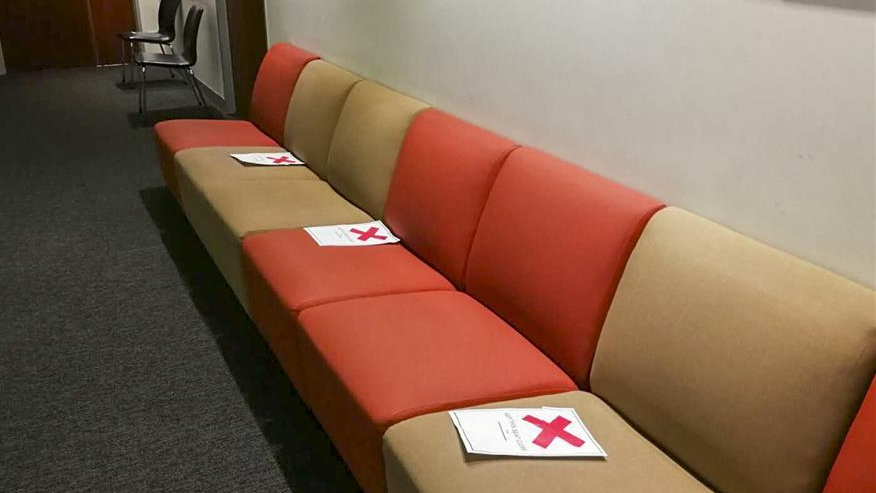 Marks on the sofa reminding people of social distancing at a clinic in Melbourne, Australia, March 25, 2020. /Xinhua

Marks on the sofa reminding people of social distancing at a clinic in Melbourne, Australia, March 25, 2020. /Xinhua

Despite the increasing demand, quality is still the top priority. China has paid close attention to the safety and quality of exported medical supplies and tightened rules in this respect. For example, extra documents should be provided by exporters of medical products when they go through customs clearance.

On March 31, the Ministry of Commerce, together with the General Administration of Customs and the National Medical Products Administration, issued an announcement on the orderly export of medical materials, which requires medical suppliers to obtain relevant qualifications and meet the quality standards of the importing country or region.

‘Not forget the helping hand of others’

“China does not and will not restrict the exports of medical supplies”, said the country's commerce ministry on April 5, adding that the country will not forget the helping hand of other countries when the coronavirus broke out in China and will return the favor.

China has exported 1.44 billion U.S. dollars worth of supplies for coronavirus containment since March 1, according to the country's customs authority. As of April 4, 54 countries and regions and three international organizations have signed a deal on medical supplies purchase with China, and 74 countries and ten international organizations are in the negotiation phase. 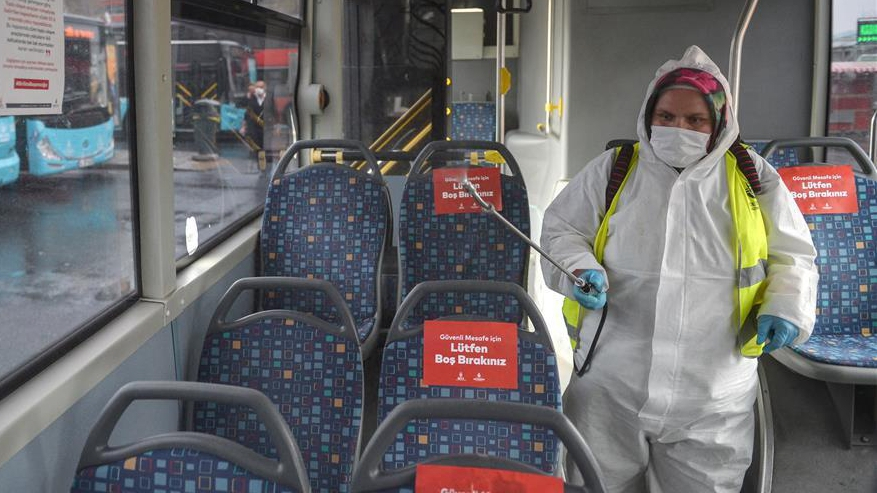 Meanwhile, on April 4, 300 ventilators have been transported to Britain from China. Minister for the Cabinet Office Michael Gove also thanked the Chinese government for its support at a press conference that day, adding that the British government is buying ventilators from many countries, including China.

There are currently 8,000 ventilators in the UK, which can temporarily meet the needs of epidemic prevention, but 30,000 ventilators will be needed in the future, the minister said.