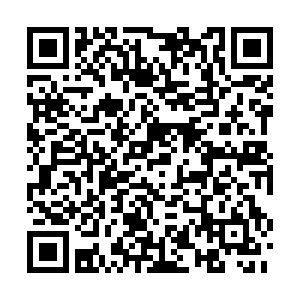 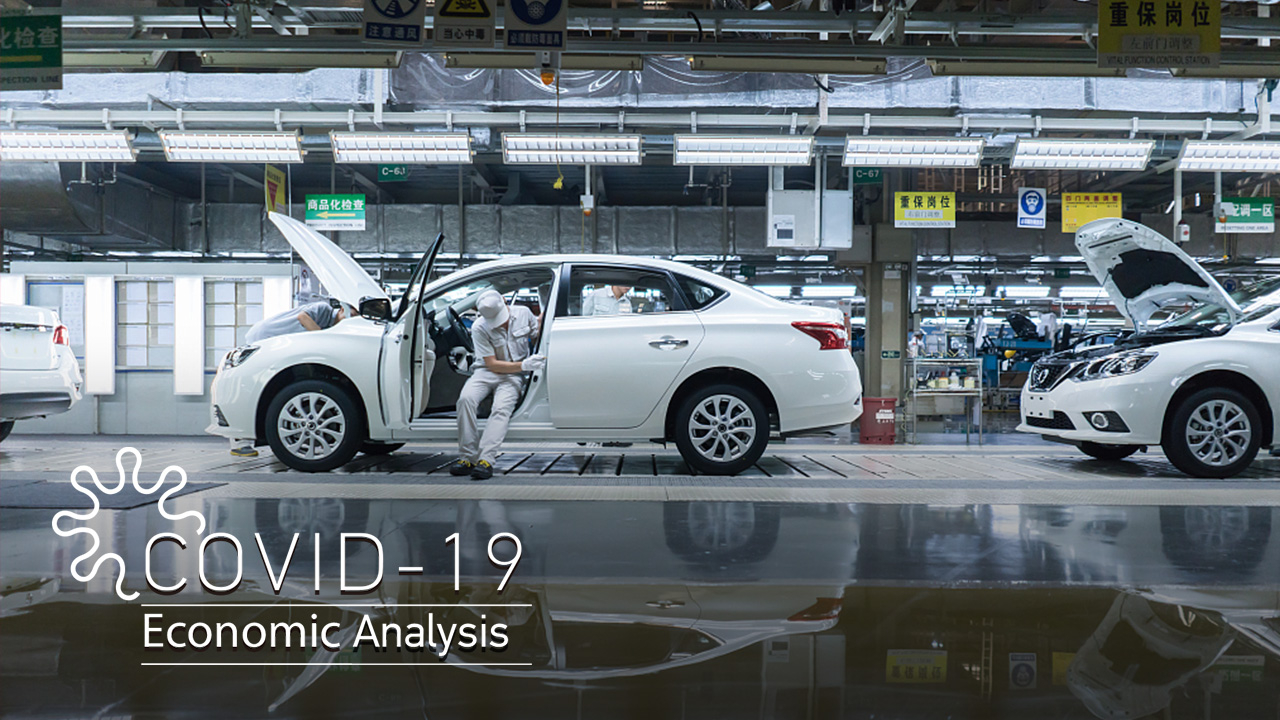 Editor's note: COVID-19 Economic Analysis is a series of articles offering expert views on developing micro and macroeconomic situations around the globe amid the coronavirus pandemic. This article's author Thomas Zhang is the head of Greater China Analysis at Uzabase, a Tokyo-based business intelligence firm.

The novel coronavirus has brought the gravest challenge to the world since the Second World War. Not only are millions of lives threatened across the globe, but the world economy has also sunk to its lowest in decades. Nearly half of the world population are living under lockdown. We have no idea when the pandemic will be brought under control worldwide. Some economists are warning that by many measures, the global economy is already in a worse shape than the Great Depression of the 1930's.

The COVID-19 pandemic has hit hard those industries that rely on a highly complex and globally connected supply chain, and among them the automobile industry – a key sector in China, Japan, the U.S. and many European countries – has suffered particularly heavily. The modern automobile industry has, over the past few decades, developed a supply chain literally across continents, with parts and components moving cross-border multiple times before being assembled into a whole car. As the coronavirus spreads across the world and confined millions to their homes, assembly lines came to a halt after stocked components ran out, eventually leading to factories suspending production altogether.

The disruption to the industry started where the coronavirus first started: Wuhan, the capital city of central China's Hubei Province. Some experts dub Wuhan (and its surrounding areas) the "Detroit of China," because it accounts for nearly 10 percent of vehicles produced in China and is home to hundreds of parts suppliers. Honda from Japan has a manufacturing hub in Wuhan, as well as SAIC General Motors, which owns well-known brands such as Buick and Chevrolet. Due to the lockdown and the subsequent travel restrictions imposed, few workers were able to return to the factories after an extended Chinese New Year Holiday. Car plants in the region had no choice but to stop running. 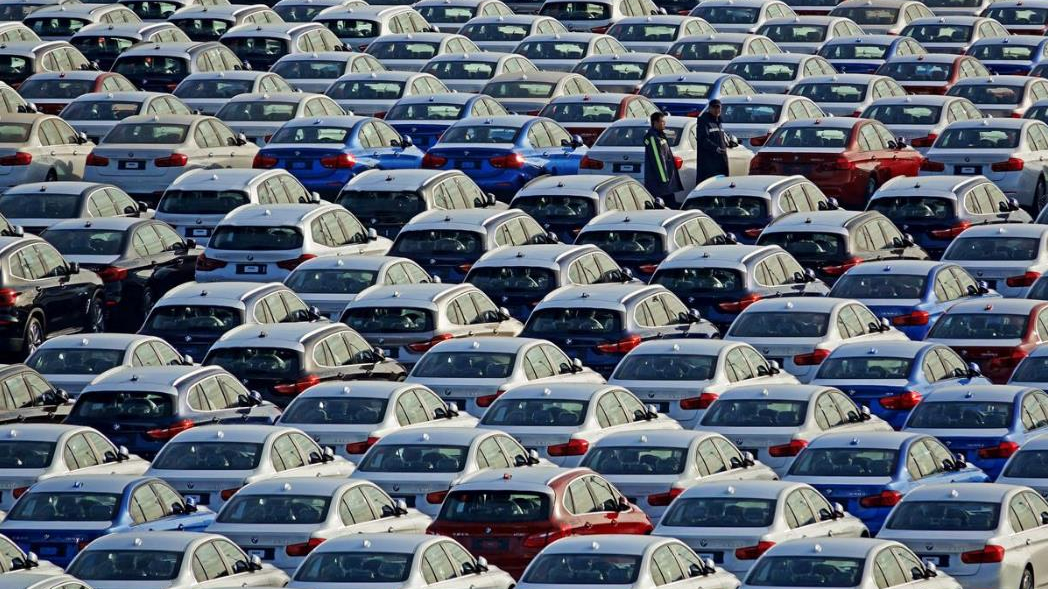 BMW cars are seen at an automobile terminal in the port of Dalian, Liaoning Province, China, January 9, 2019. /Reuters

BMW cars are seen at an automobile terminal in the port of Dalian, Liaoning Province, China, January 9, 2019. /Reuters

The suspension not only affected China's domestic vehicle production, but also had a far-reaching impact on car manufacturing on a global scale. The reason is simple: Almost all major global carmakers nowadays rely on parts produced in China. The closer they are to China, the earlier they feel the impact. Hyundai suspended production in South Korea as early as February 7, becoming the first major carmaker to do so outside China due to supply shortages of parts from China. A few days later, Nissan's plant in Kyushu, southwest Japan, briefly halted production for a few days as well for the same reason.

It then shifted westwards to Europe, because carmakers in Europe are reliant on parts produced in China too. Fiat Chrysler became the first European carmaker to fall victim to a parts shortage, when it temporarily ground to a halt at its Kragujevac plant in Serbia around mid-February. Later on, and further west to Serbia, the British carmaker Jaguar Land Rover resorted to more drastic measures by flying components out of China in suitcases in a desperate attempt to prevent its UK plants from closing down.

Now, China has managed to bring the coronavirus outbreak largely under control. Travel is becoming easier nationwide, enabling isolated workers to return to factories, and even the lockdown in Wuhan was lifted on Wednesday. Carmakers up and down the country have rushed to resume production as much as they can. Some acted early on, such as General Motors, Fiat Chrysler and Toyota, who all began the process of restarting production from late February, although insufficient number of workers prevented them from running at full capacity.

By mid-March, the vast majority of carmakers in China were able to operate with almost all lines running with alternating shifts of workers, thus bringing their output back to levels before the Chinese New Year holiday. However, global auto giants hardly had any time to celebrate before they were plunged into similar problems in Europe and U.S., which quickly became the new epicenter of COVID-19. In response to guidelines from governments, carmakers from Daimler to Fiat Chrysler, from Renault to Volkswagen, and from Honda to Nissan, shut down their production lines one by one across Europe. Volvo, the Swedish brand owned by the Chinese Group Geely, was the final large group in the auto sector to cease production in Europe. Yet at the same time, its CEO Hakan Samuelsson told media that Volvo's factories and dealerships in China had resumed operation close to pre-shutdown levels. 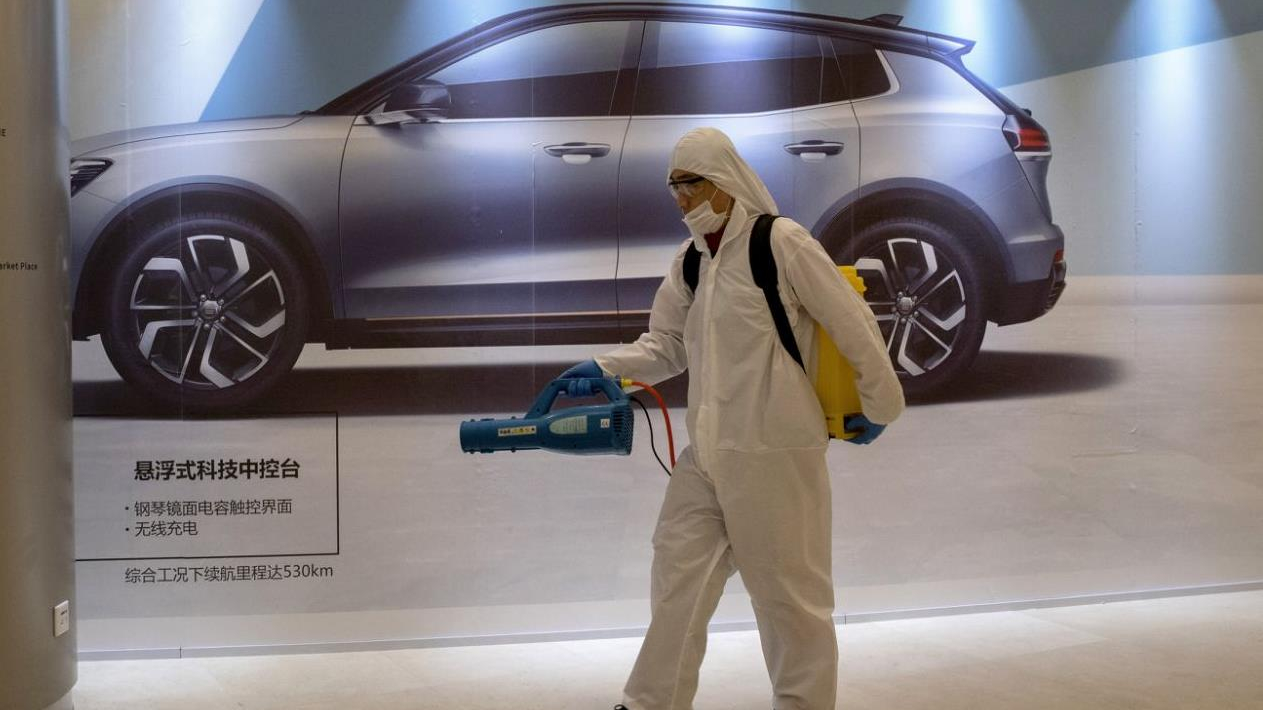 A worker disinfects a mall near an advertisement for a car in Beijing, China, February 12, 2020. /AP

A worker disinfects a mall near an advertisement for a car in Beijing, China, February 12, 2020. /AP

Such is the "time difference" revealed in the global automobile industry amid the COVID-19 pandemic. It started in China, threw China-based manufacturing of parts and components into disarray, and caused logistics and production chaos to factories beyond the border of China. By the time China was back to normal and car parts were rolled off lines again, most of the manufacturers in Japan, Europe and the U.S. were forced to halt production because the outbreak had moved there, leaving parts made in China nowhere to go. China has made tremendous efforts to resume economic activities since early March, only to find out that a substantial part of the export-led economy has lost its customers, rendering the manufacturing at home close to meaningless. Whether to keep the production lines running has ironically become a paradox.

Perhaps it only goes to show how globally interconnected the supply chain is for today's automobile industry. These supply chains are formed through decades of globalization, in which multinational carmakers pursued profits and efficiency relentlessly and governments across the world dolled out preferential policies in order to win them over. China's rise as the world factory in the past twenty years played a significant role in this process. The whole world witnessed it.

Whether the COVID-19 pandemic is going to change that remains to be seen. As the world mobilizes and fights off the virus, talks of "decoupling" can often be heard: Dismantle the current supply chain and move bits of manufacturing, at least the essential parts, back home. It is, however, easier said than done, especially when it comes to China, as the combination of China's advantages in costs and skills of labor, scale of land and efficiency and convenience of infrastructure made it particularly appealing to global automobile giants.

This pandemic is horribly destructive, but it's unlikely to keep the world still for years. Sooner or later, factories will reopen and car making will start again. There will be some second thoughts, for sure, and manufacturers are likely to conduct a thorough review of the current supply chain and see how it can be adjusted to weather shocks of this scale in the future. The virus has led to "panic buying." It'll lead to "panic planning" too. But after all, this is an economic activity and basic economic rules apply. Factors such as cost, efficiency and business continuity have been, and will always be vital parameters in the equation. Is "coronavirus" really going to take up a significant place in the post-pandemic equation?

Just as the adage goes: "Rome wasn't built in a day," it won't fall apart in a day either, unless someone deliberately burns it down. But in the case of global supply chain for the auto industry, who in their right minds would do this? Some sensible discussions about readjustment of the supply chain are completely understandable. It would be unhelpful if we are scared into overreaction by starting to destruct a major achievement of globalization that has been proved to be hugely beneficial to people all over the world. No doubt there will be politicians making use of this pandemic and trying to get their messages across to supporters, but political maneuvers in this extraordinary time do good to no one. Automobile manufacturing is a genuinely global industry. It will remain so with or without the coronavirus outbreak.