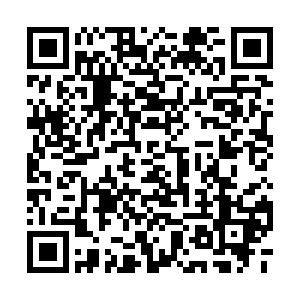 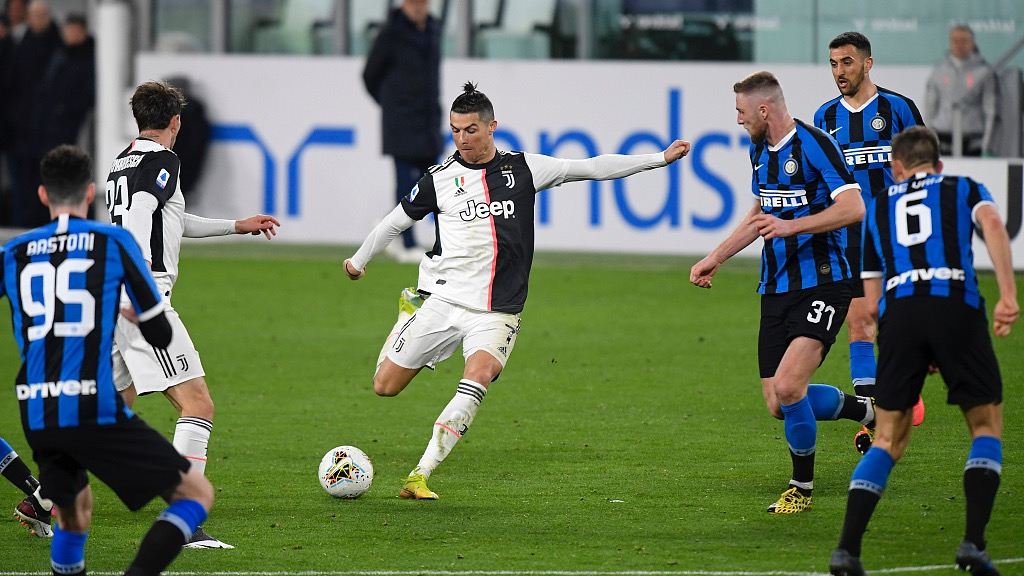 Cristiano Ronaldo (C) kicks the ball during the Serie A clash between Juventus and Inter at Allianz Stadium, Turin, Italy, March 8, 2020. /VCG

Cristiano Ronaldo (C) kicks the ball during the Serie A clash between Juventus and Inter at Allianz Stadium, Turin, Italy, March 8, 2020. /VCG

The Italian Football Federation (FIGC) President Gabriele Gravina has insisted that the country's top flight clubs "must be ready" to act fast and restart when the COVID-19 pandemic eases and sporting activities are "allowed to resume."

Serie A was roughly two thirds of the way through the season when it was interrupted and the FIGC wants to complete the campaign to reduce financial damage. It has said it is prepared to continue until September or October if necessary.

"If and when we get the green light to gradually resume the sport, the world of football must be ready," said Gravina after a video conference on Wednesday.

"That is the aim of our medical commission. Considering the role that football plays in Italian society, I am convinced that we can give an important contribution to the whole country." 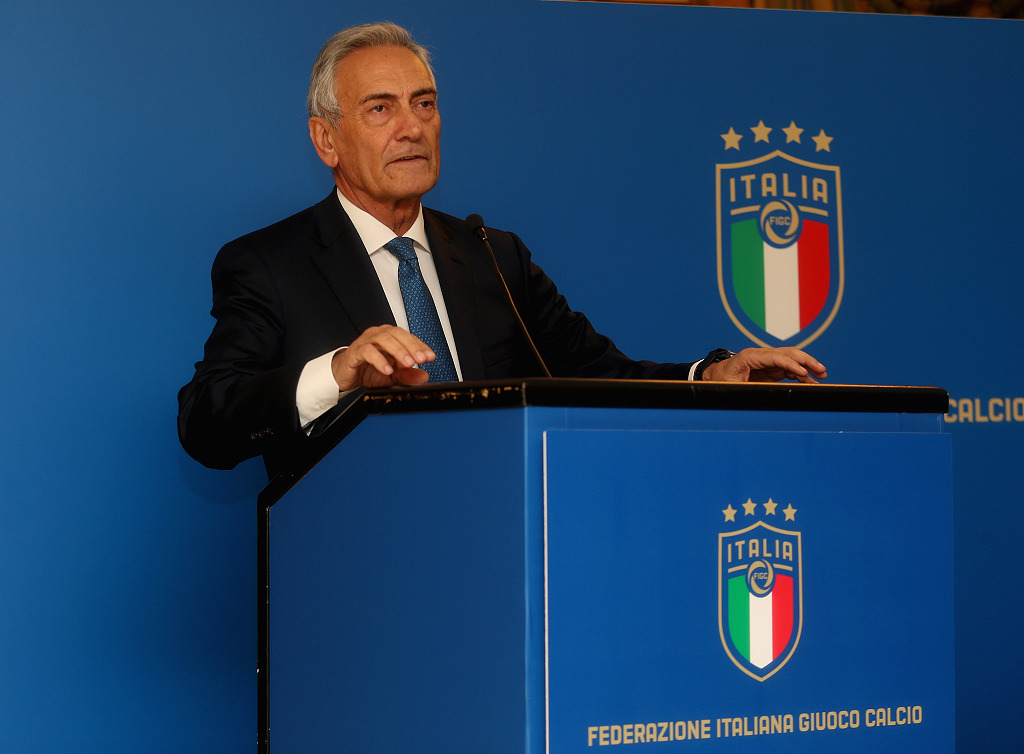 Italian Football Federation Chairman Gabriele Gravina says they have begun to draw up guidelines for a possible re-start of Serie A. /VCG

Italian Football Federation Chairman Gabriele Gravina says they have begun to draw up guidelines for a possible re-start of Serie A. /VCG

According to local media outlets, a protocol was largely worked out, but has not yet been defined.

"The protocol concerning footballers and members of staff already infected and 'cured' of COVID-19 was also discussed. The diagnostic tests indicated for this category will follow a protocol appropriate to the clinical severity of the infection suffered," he added.

Meanwhile, Real Madrid's playing and coaching staff have voluntarily agreed to take a wage cut of between 10 and 20 percent this year to help the club deal with the coronavirus outbreak, the La Liga giants said in a statement on Wednesday.

The club said the exact amount would "depend on the circumstances that may affect the closing of the current 2019/20 sports season." Club directors have also agreed to a wage cut as have members of its basketball team, it said.

The club said the move followed negotiations between the team captains – Sergio Ramos for the senior soccer side – and club directors. It said the decision would save having to cut the wages of other employees. 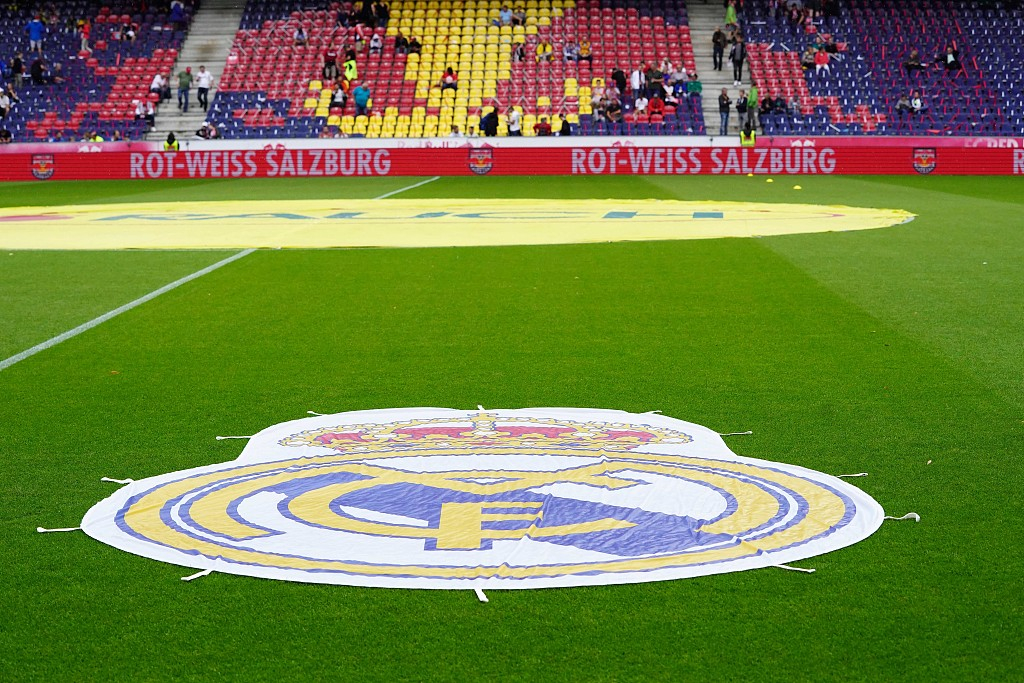 "This decision, taken by players, coaches and employees, avoids traumatic measures that affect the rest of the workers," said the statement.

It said it would also help deal with "the reduction in income that the club is suffering these months as a result of the suspension of competitions and the paralysis of a large part of its commercial activities."

With the Premier League at a standstill, the players have been criticized in the British media over the last week for resisting calls from the clubs to accept wage deferrals and cuts to reduce wage bills.

The players'union, however, questioned the call for a 30 percent player wage reduction, saying it would reduce tax revenue for Britain's NHS.

The union said that the players wanted to ensure their contributions supported the clubs they play for, non-playing staff, lower league clubs and the NHS. 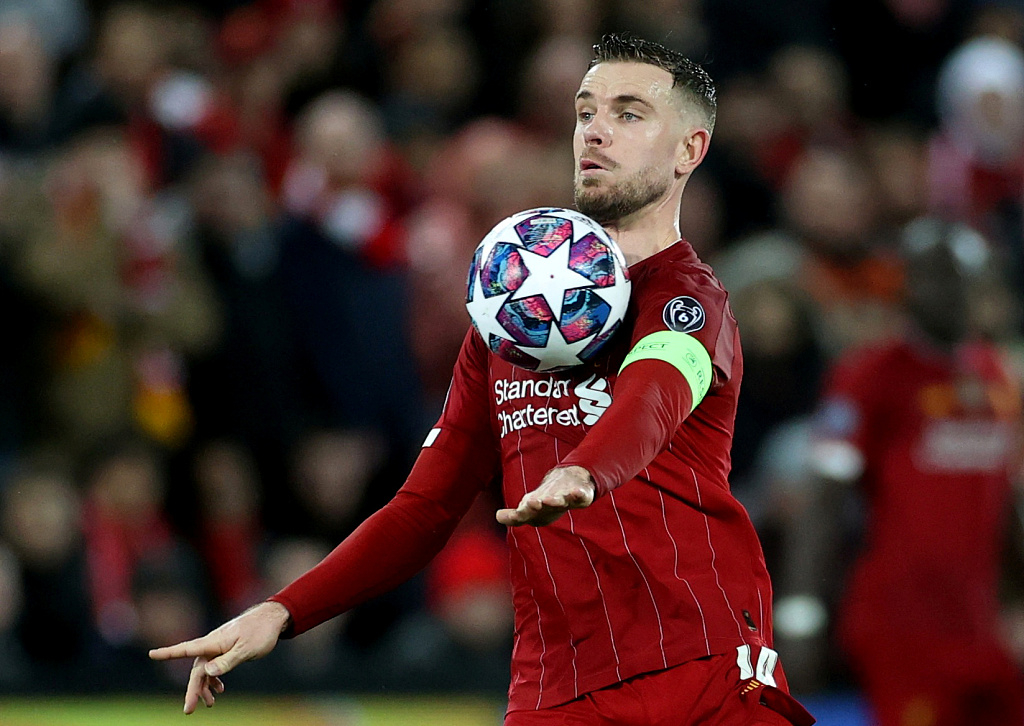 Liverpool captain Jordan Henderson is one of the administrators of the charitable fund for National Health Service. /VCG

Liverpool captain Jordan Henderson is one of the administrators of the charitable fund for National Health Service. /VCG

Tottenham and England captain Harry Kane and Liverpool captain Jordan Henderson were among the players to tweet a statement on Wednesday with the hashtag #Playerstogether.

"We can confirm that after extensive conversations between a huge number of players from all Premier League clubs, we have created our own collective player initiative, #PlayersTogether," said the statement.

It added that it would partner with NHS Charities Together (NHSCT), which represents over 140 NHS charities, to "assist them in generating and distributing funds quickly and efficiently to where they are needed most."

According to the Guardian, while all Premier League squads will gladly contribute to the fund overseen by the captains, which allows for greater control over where the money will go, some will not accept pay cuts.