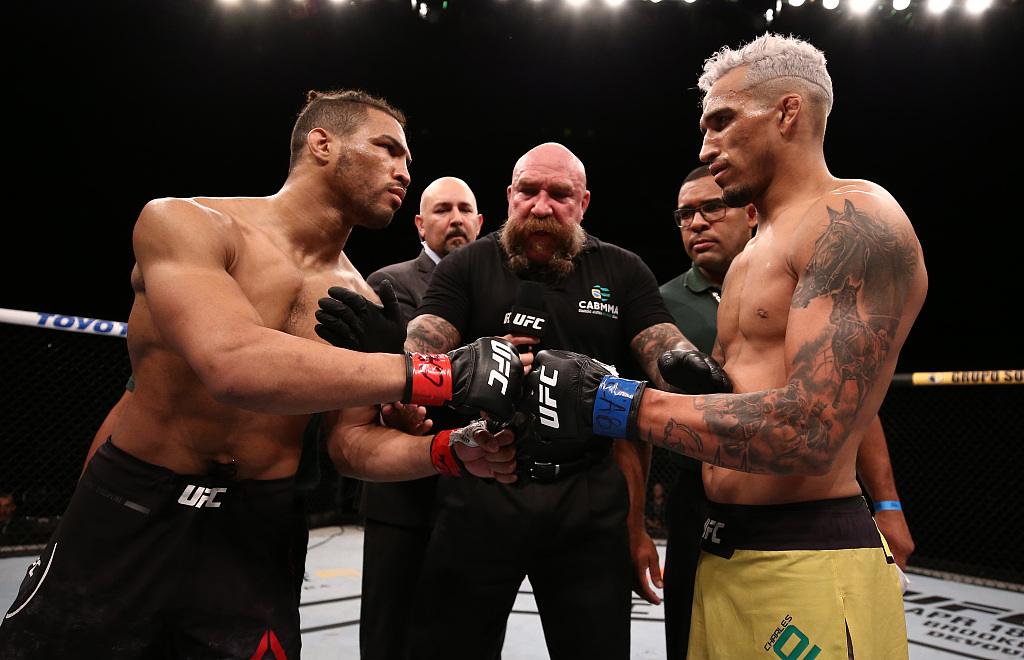 Opponents Kevin Lee (L) of the U.S. and Charles Oliveira of Brazil face off prior to their lightweight fight during the UFC Fight Night event in Brasilia, Brazil, March 14, 2020. /VCG

Opponents Kevin Lee (L) of the U.S. and Charles Oliveira of Brazil face off prior to their lightweight fight during the UFC Fight Night event in Brasilia, Brazil, March 14, 2020. /VCG

The Ultimate Fighting Championship (UFC) is aiming to circumvent coronavirus lockdown restrictions by staging an event on an Indian reservation in California later this month, U.S. media reported on Wednesday.

The New York Times reported that UFC chief Dana White planned to hold UFC 249 at the Tachi Palace Resort Casino in central California on April 18, sidestepping state guidelines that have brought sports to a standstill.

The casino – which has been closed since March 20 because of the COVID-19 pandemic – is on land belonging to the Tachi-Yokut Tribe.

Indian reservations typically operate independently of the states in which they are located, outside of local government or U.S. federal government control.

By staging the event on tribal land, organizers also evade the requirement to obtain sanctioning from the California State Athletic Commission.

White has repeatedly voiced determination to continue holding UFC cards, insisting that the circuit can continue safely with events held without spectators.

On Monday, White told ESPN that he had secured a venue for UFC 249 and further events but did not state where. White also said he had secured the use of an "island" to stage fights.

"This place where this fight is going to be on April 18 I have locked up for two months, so I'm going to continue to pump fights out," White said.

The UFC has already postponed three events – UFC London, UFC Columbus and UFC Portland – after officials were unable to find venues to stage fights amid restrictions put in place to combat the COVID-19 pandemic.