In a pandemic, putting one's life on the line to vote
By Yu Jing 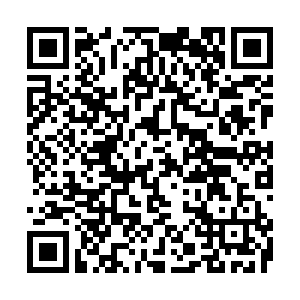 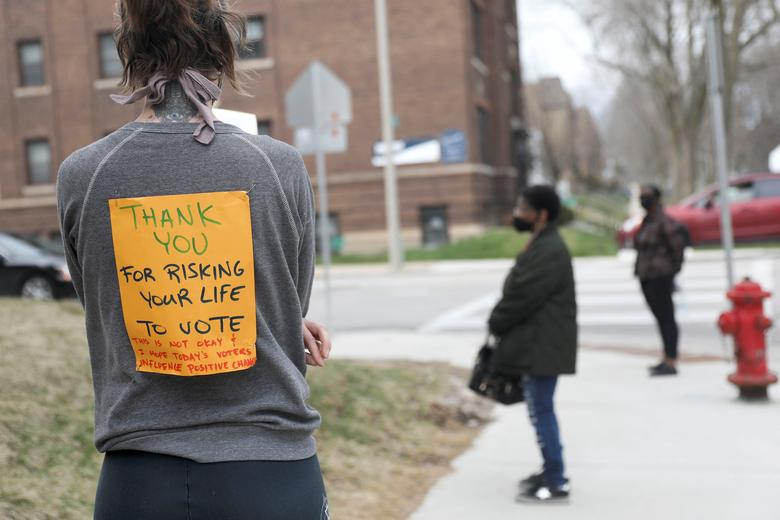 A voter wears a sign reading "Thank you for risking your life to vote" as she waits in line to cast a ballot during the presidential primary election in Milwaukee, Wisconsin, U.S., April 7, 2020. /Reuters

A voter wears a sign reading "Thank you for risking your life to vote" as she waits in line to cast a ballot during the presidential primary election in Milwaukee, Wisconsin, U.S., April 7, 2020. /Reuters

On Tuesday, residents from Milwaukee in the U.S. state of Wisconsin were seen braving long lines to cast their vote. Lines stretched for blocks even before 7 a.m. local time, and the wait can go up to two hours.

Many wore gloves, masks and held disinfectant wipes, standing a few meters apart from each other in line with the social distancing rules. Plexiglass glass barrier separating poll workers from voters were seen at the polling stations, forcing thousands to weigh the risk to their health against their civic duty to participate in elections.

Wisconsin is the first and only state to insist on holding in-person voting amid the coronavirus pandemic. Across the country, several states have already expanded mail-in voting in a bid to reduce public gathering. But in Wisconsin, Republican leaders have resisted attempts from the state's Democrat governor to postpone in-person voting, and the state Supreme Court blocked a last-minute attempt by the governor to delay in-person voting by executive order.

"Republicans rejected the call to delay the election because a low turnout and immediate election will play to the advantage of the incumbent, conservative judge Justice Kelly," said Diao Daming, associate professor at the School of International Relations at Renmin University of China.

Tuesday's election result will decide a crucial seat on the state's Supreme Court, with judge Jill Karofsky, a candidate backed by Democrats, running against the conservative Justice Daniel Kelly. 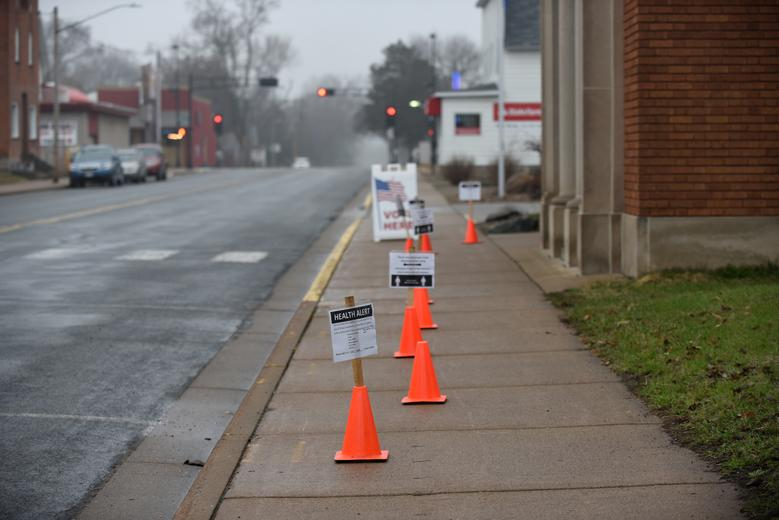 Wisconsin is now an important political battleground in the national election and the partisan fight within the state is getting intense, he added. The winner of the race will also play an important role in deciding an important case before the court, on reviewing the drawing of new district lines for legislative and congressional offices following the 2020 census, which may potentially shift the balance of political power.

The partisan fight over the eligibility of mail-in voting is already playing out at the national level. During a press conference on Tuesday, President Trump alleged that "mail ballots are very dangerous for this country because of cheaters." He said that those who vote "should have voter ID." Thomas Massie, Republican representative from Kentucky, also wrote in a tweet that "universal vote by mail would be the end of our republic as we know it."

Even before the coronavirus outbreak, whether or not to expand mail voting has broken along partisan lines. Democrats have generally favored expanding mail voting, whereas Republicans have tried to push as much in-person voting as possible. The belief is that expanding mail-in voting would invite higher turnout among people of color and those of lower income, who tend to vote for Democrats over Republicans.

"But there is no conclusive evidence that says they tend to prefer Democrats over Republicans, particularly as the 2016 election shows that Trump's appeal to working-class white Americans was particularly strong," said Diao. 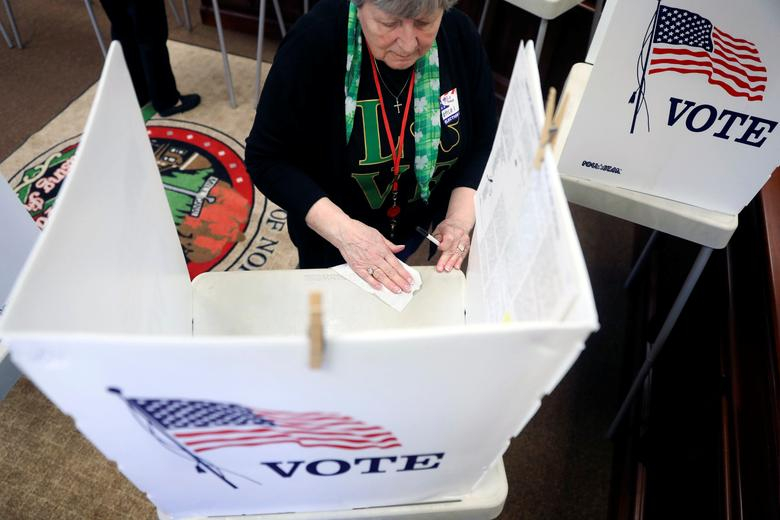 An election judge uses a disinfectant wipe to clean a voting booth at a polling station during the primary election in Utica, Illinois, U.S., March 17, 2020. /Reuters

An election judge uses a disinfectant wipe to clean a voting booth at a polling station during the primary election in Utica, Illinois, U.S., March 17, 2020. /Reuters

If mail-in voting leads to higher voter turnout, it may also benefit Republicans, he added, citing a survey done by the Knight Foundation on 12,000 chronic non-voters which concludes that if all non-voters vote in 2020, they would add an almost equal share of votes to Democratic and Republican candidates.

The push against mail-in voting is consistent with Republican party's year-long pursuit to introduce more stringent new voter identification requirements, citing the need to crack down on voter fraud.

But there is little evidence that suggests widespread voter fraud exists because of mail-in voting. According to a database compiled by News21, a national investigative reporting project that tracks election fraud, absentee-ballot fraud cases numbered 491 between 2000 and 2012 when billions of votes had been casted. In the five states that rely primarily on mail-in voting, absentee-ballot fraud cases were extremely rare.

Wisconsin's fight over mail voting heralds what is likely to come as the presidential election draws closer. Congressional Democrats asked for billions in the two-trillion-dollar stimulus package to expand the use of absentee voting and got 400 million dollars in the end. According to U.S. media report, Democrats are now pushing to include two billion dollars for voting assistance in the next coronavirus stimulus bill. 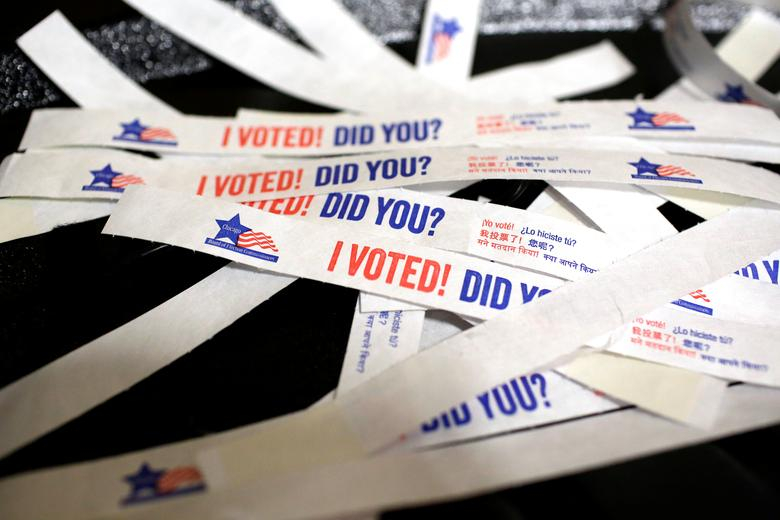 Though the impact of mail-in voting on election result is unclear, it will likely affect Trump and presidential candidates' campaign strategy, Diao from Renmin University noted. To expand mail-in voting mostly entails early voting, which adds uncertainty to the campaign teams' agenda-setting.

"Because mail-in voting allows voters to cast votes over a period of months, presidential candidates do not know when they should come up with a package of policies to appeal to voters, and when to schedule rallies to target at people who vote at different time – these all add to the difficulty of agenda-setting," he said.

The fight over expanding voting rights is likely to gain more prominence as President Trump now is leading the fight. In a tweet, he wrote that mail-in voting "for whatever reason, does not work well for Republicans."

The partisan brawl over mail-in voting is forcing millions of Americans between a rock and a hard place: stay at home and not to exercise civic duty, or go out and risk their life to cast the vote. At a time when peoples' livelihoods are at risk, and families torn apart due to the loss of loved ones, this is a difficult choice that should not be thrusted upon anyone.