What does the future hold for China's free trade port?
By Li Jianhua Hainan, the southernmost province of China, is rebranding itself into a free trade port after two years in the making. Designating the island as a new window to Southeast Asia and beyond, Chinese authorities are striving to further open up its market.

All in all, the whole island is planned to be a free trade zone featuring Chinese characteristics, with the development of the province's trade, business, tourism, technology and education.

"We can rely on the rest of China, it's such a huge economy, a massive market. This is our unparalleled advantage," said Chen Xiaohua with Hainan's Comprehensive Deepening Reform Committee, adding "Singapore and Dubai's free trade ports are ahead of us in terms of info technology and other facilities, whose levels of automation and AI are advanced. But we are catching up by fixing our weaknesses."

The coronavirus outbreak has taken a toll on the island's tourism, as much of the world's population is still under lockdown. But on the beaches and promenades in Sanya, the island's most prominent touristy city, holiday makers are gradually coming back.

As the epidemic dies down, at least in China, local residents and tourists are venturing out to the beach, some with their masks taken off while basking in the sun. 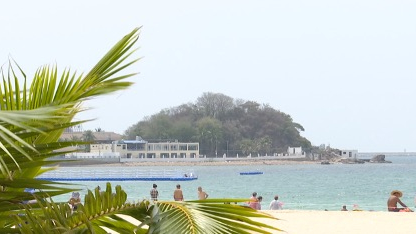 Tourists are gradually returning to Hainan as the coronavirus outbreak continues to die down in China. /CGTN

Tourists are gradually returning to Hainan as the coronavirus outbreak continues to die down in China. /CGTN

Before the coronavirus hit China in January – and then the whole world – Hainan's tourism witnessed a healthy growth. About 83 million trips were made to the island in 2019, which increased by 9 percent, according to Hainan Provincial Department of Tourism and Culture, Radio, Film and Sports. The number of foreign visitors stood at slightly over 1.4 million, witnessing an increase of 11 percent.

However, when compared with Indonesia, where tourism is one of the major pillars of the economy, the number of Hainan's foreign visitors is dwarfed. Figures show that a total of 16.1 million foreign tourists visited Indonesia throughout 2019, according to Statistics Indonesia. The target for Hainan in 2020 is 2 million foreign visitors, which is highly likely to be frustrated by the coronavirus pandemic.

"Some tourists are choosing to travel abroad, because they think Sanya is more expensive compared to other countries," said a shop owner in Sanya, who sells coconut for a living. She said the number of visitors has seen a slight decline over the past two years.

"Tourist destinations, such as Singapore and Thailand, have better tourism facilities. We can learn from them," said a local resident.

"There will be some preferential policies in terms of offshore duty-free shopping so that both local residents and tourists can enjoy the benefits of free trade port construction," said Liu Cheng, deputy director of Hainan Provincial Department of Tourism and Culture, Radio, Film and Sports. "We'll work to strengthen the integration of tourism with other sectors, especially medical tourism, which will be our next target."

Tucked away in a small town called Boao, Hainan's medical tourism is burgeoning. The Hainan Boao Lecheng International Medical Tourism Pilot Zone was the first of its kind approved by the central government in 2013.

Enjoying a set of preferential policies, the pilot zone – more like a small city – is granted special permission to import medical equipment and medications which have not yet been approved for the Chinese market.

"As for the imported equipment, if we have to pay high taxes, the expenses will be transferred to our customers. The pilot zone lowers taxation, so our services can be cheaper than our counterparts internationally," said Liu Weifu, executive officer of Yiling Hospital Management Group. The plan also calls for making breakthroughs in building an advanced clinical center - a base for R&D and the application of cutting-edge medical technologies.

By 2030, the zone is slated to develop into a world-class destination for international medical tourism and innovation platform for medical science and technology.

However, the prices are still unaffordable for the general public, and hospitals, such as Yiling Hospital Management Group told CGTN that they are trying to connect their medical services to the country's government health and medical insurance programs, in the hope of attracting more customers.

Is Hainan likely to overtake Shenzhen as a tech hub?

Hainan aims to build itself into a modern tech hub, as part of the overall plan of transforming the island into a free trade port.

Located in the southern tip of Hainan, a sci-tech park, named Sanya Yazhou Bay Science and Technology City, is under construction.

Jiang Zhimin, who moved here from south China's Guangdong Province nearly a year ago, is designated to handpick China's tech companies for the park. Jiang said as for small tech firms, he is seeking those with technology reserves and promising future in the market.

"As for big companies, they should be champions in their own fields, which can bring in a whole production chain for us when they join. Another type is (tech) incubators," added Jiang. 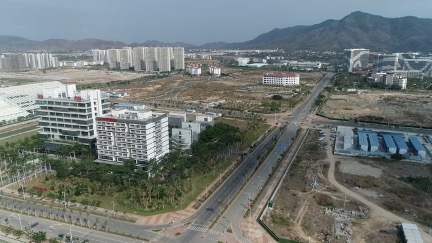 Among some Chinese companies, which have set up branches in the tech park, is iFlytek, which is headquartered in central China's Anhui Province.

"Here, we are more focused on mainstream core technologies, like iFlytek's AI and translation. To be honest, there is a big gap between Hainan and Beijing, Shanghai, Guangzhou and Shenzhen. However, we came here not because Hainan is already rather developed, but because we can build a better Hainan under the new free trade policies here," said Zhang Shubin, general manager of iFlytek in Hainan.

As a fledgling tech hub, Hainan is confronted with some tough competition, most notably Shenzhen, a major electronics manufacturing base which hosts some of China's major tech giants, including Huawei, Tencent, DJI and ZTE.

Hainan, in order to bring in talent, earlier opened over 30,000 jobs, including 470 earmarked for foreign nationals, according to Sansha Satellite TV. These openings cover services, tourism and high-tech industries. The 470 positions for "international talent" mainly include language teaching, hospitality and aviation.