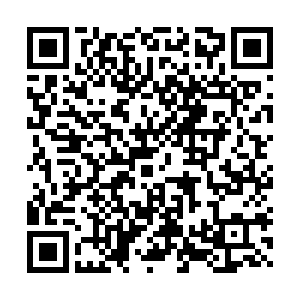 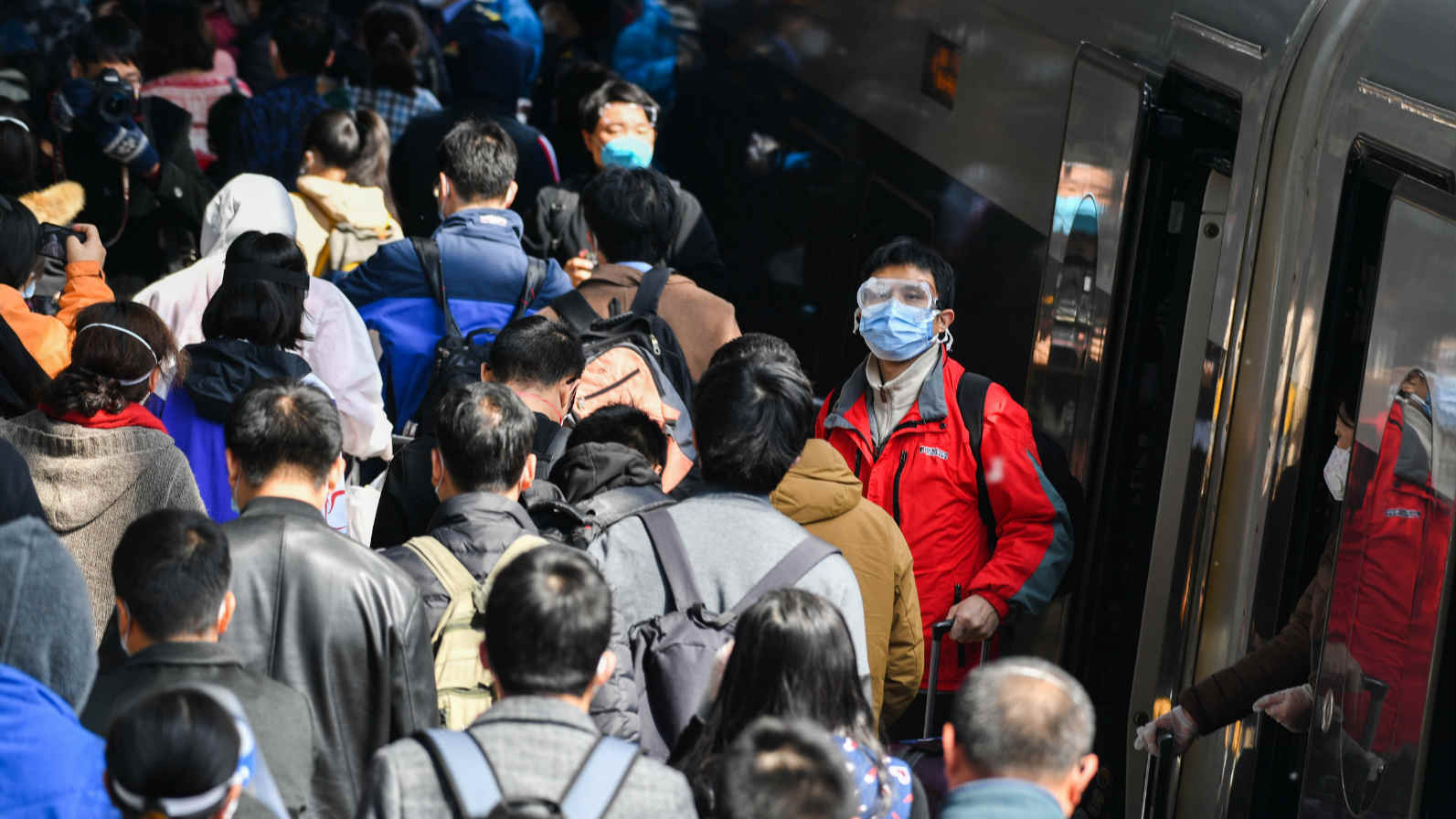 People stuck in Wuhan during the two-month lockdown take the first train back to Beijing on April 8, 2020. /VCG

People stuck in Wuhan during the two-month lockdown take the first train back to Beijing on April 8, 2020. /VCG

Tang Lao* resumed work in Beijing on Monday after ending her 14-day mandatory quarantine period and returning to her rented house on Saturday. Her life is getting closer to reverting back to normal as she's now back in her host city and has returned to the office, after a two-month lockdown in central China's Hubei Province, the epicenter of the country's coronavirus outbreak.

"Life is gradually getting back to normal," Tang, a user interface designer at an Internet technology company, told CGTN.

She is part of the second batch of people who boarded a train back to the capital after being stranded in Hubei since late January.

Wuhan was placed on lockdown just hours before one of China's most important holidays, Spring Festival as numbers of coronavirus infections jumped and the virus tore through neighboring cities.

China has reported close to zero new COVID-19 deaths in recent days, as the number of confirmed cases in the country reached around 82,000 and the death toll of climbed over 3,000.

With the epidemic situation in the country easing, businesses are resuming work and production is back on track. Hubei started removing travel restrictions since March 25, which culminated in the Wuhan lockdown being lifted on Wednesday. But not everyone has found it easy to return to the life they had before the virus struck. 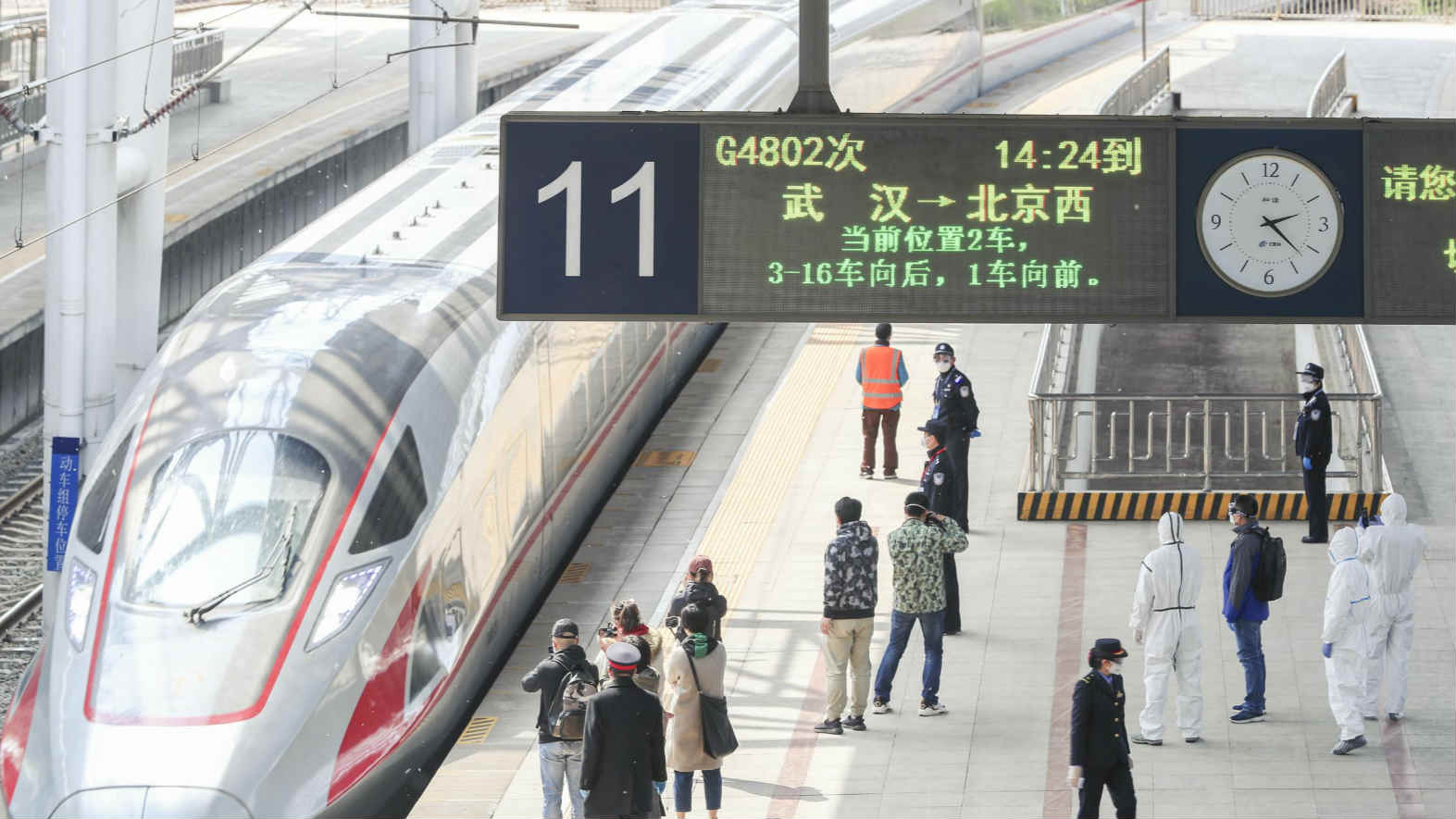 The first train from Wuhan after the city lifted its two-month lockdown arrives in Beijing on April 8, 2020. /VCG

The first train from Wuhan after the city lifted its two-month lockdown arrives in Beijing on April 8, 2020. /VCG

In a chat group on WeChat, a Chinese messaging app similar to WhatsApp, hundreds like Tang are still trying to return to their city of residence and asking about the latest returning policies.

"I had tried several times to return to work since mid-February, but Beijing had strict rules and Hubei people were not allowed to return to the capital at the time. So I had to wait for updated policies. I was quite anxious and sad at home, and I couldn't work because I hadn't brought my laptop back home," Tang told CGTN.

Beijing has launched an app called "Jingxin Xiangzhu" to facilitate the flow of returnees to the capital. Tang entered the information of her residential community in Beijing and was able to book a seat on a chartered train through the app.

She was asked to self-isolate for 14 days in an apartment by herself upon arrival in Beijing.  A real estate agent was kind enough to offer free accommodation for her. 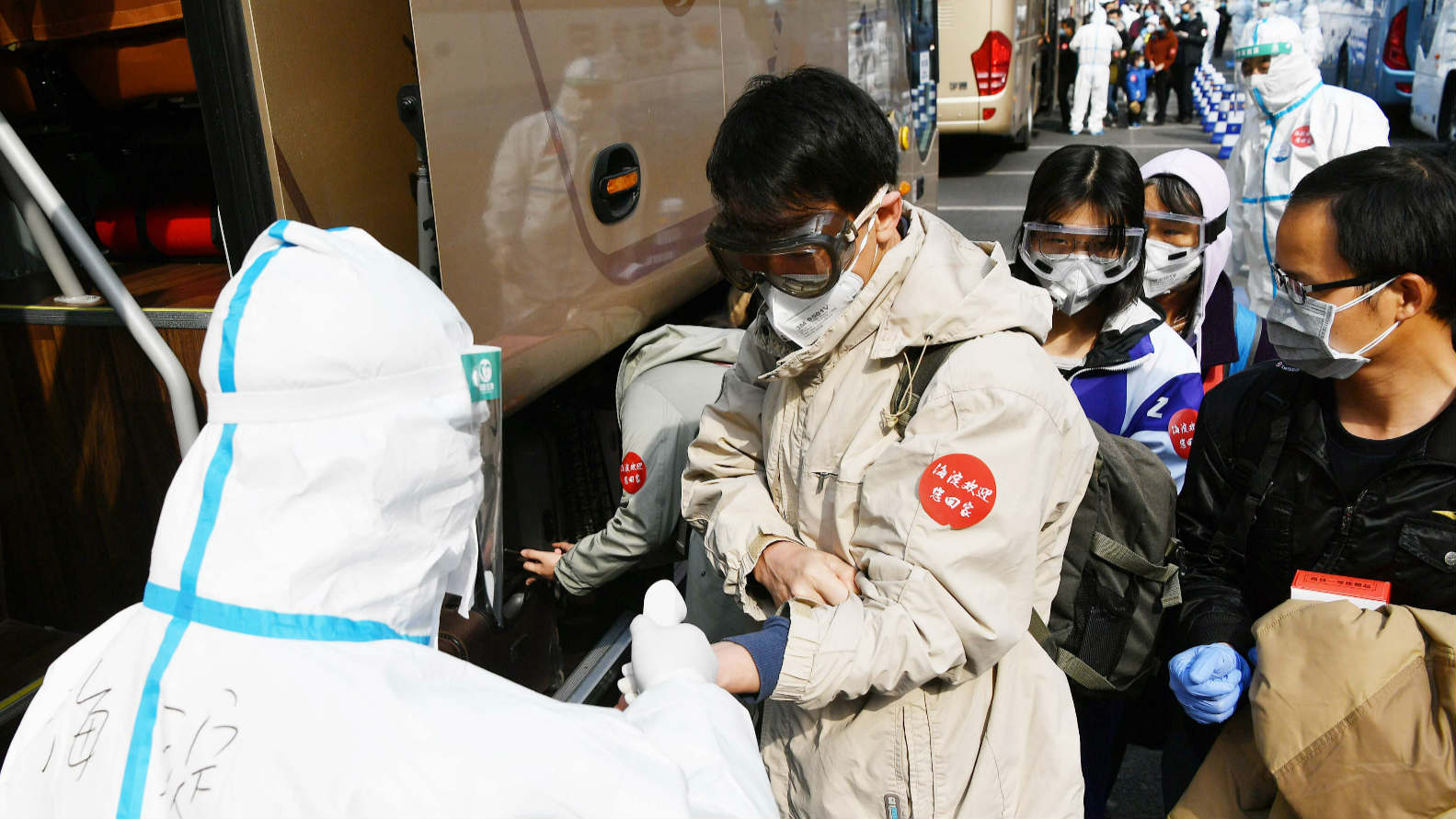 Volunteers in protective suits check the health conditions of people returning to Beijing from Wuhan on April 8, 2020. /VCG

Volunteers in protective suits check the health conditions of people returning to Beijing from Wuhan on April 8, 2020. /VCG

Gradually, people stuck in Hubei are rushing back to their workplace outside the province, driven by fear that they could lose their jobs.

"We were in a hurry to return to Shanghai, because we were afraid of changes in returning policies. The pressure on companies is great due to the epidemic, and there have been too many changes. We worried about being fired because it is hard to get another job now," He Biyao* told CGTN.

She now returns to work in Panasonic, hoping life can return to normal. She went back to Hubei for the Spring Festival, and was stuck there for two months. After seeking green health codes from local authorities to certify that they are healthy and getting proof of work from her husband's company in Shanghai, the family drove back to the city.

She and her family faced many obstacles along the way. When they arrived at Jiujiang in east China's Jiangxi Province, they were not allowed to pass the toll station, and had to make a detour and drive another 200 kilometers. Upon arriving in Shanghai at night, they were subject to 15-minute health checks because their car license showed where they had come from.

There have been reports of discrimination against people from Hubei on their way back to their host cities. Even with controls on movement removed in Hubei, a number of provinces and cities are not welcoming people from other parts of the country. One million migrant workers are still trapped in the province. 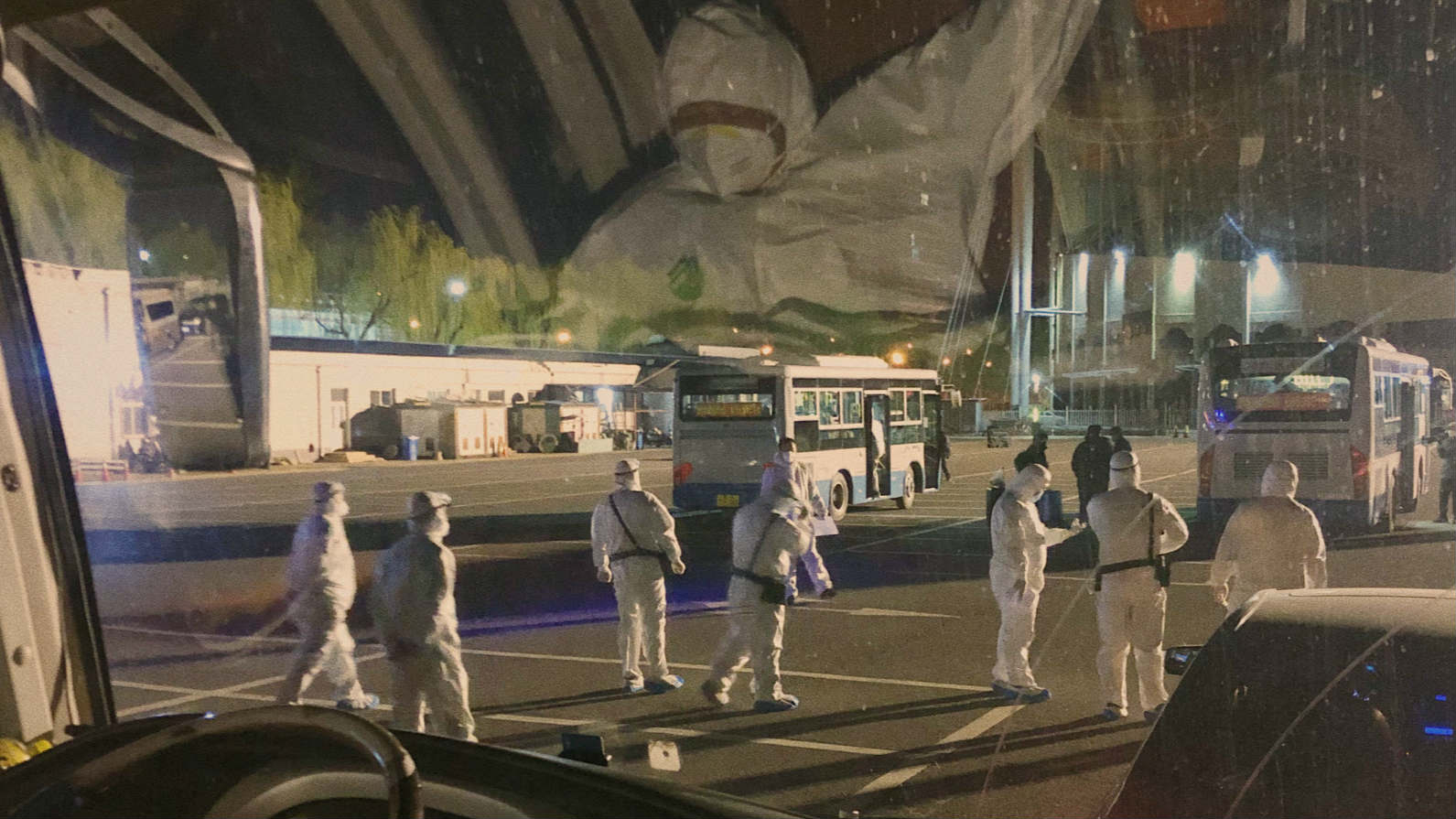 People from Hubei arrive in Beijing and wait in buses for transfer to residential communities at midnight on March 28, 2020. / Photo courtesy of Tang Lao

People from Hubei arrive in Beijing and wait in buses for transfer to residential communities at midnight on March 28, 2020. / Photo courtesy of Tang Lao

Despite difficulties in returning to work, Tang and He gradually resumed their normal life – but not everyone is as lucky. Some migrant workers in Xiamen and Zhuhai were reportedly turned away from the factories where they had worked before the outbreak because they are from Hubei.

Zhou Ju* didn't go back to Hubei during the Spring Festival holiday, but he still ran into difficulties while job hunting in Xiamen. After the protracted break, Zhou looked for work over and over again, but each time he was told to wait for an offer that would never come.

"I think it was because they saw my ID card, and they knew I was from Hubei," Zhou told CGTN.

"It was hard for us, people from Hubei, to find a job here under stricter control earlier," Zhou said, adding that "things are better now."

He is currently working in a factory producing electronics, where his relative works and had recommended him for the job.

Feng Yan* was not as fortunate as Zhou. She had to return to Wuhan after being fired from her job.

"We had resumed work in the morning. But when we were asked to register with the company in the afternoon, we showed our ID card, and were told we couldn't work there because of the age limit," Feng told CGTN. She tried other places, but no luck. She said the company owed her unpaid wages.

Feng, in her 50s, has a rural hukou, or household registration, and she didn't sign a contract with her employer, so she is not a "laborer" in the legal sense. According to China's labor law, the retirement age of a woman with a rural household is 50.

In Feng's case, it is hard to protect her interests through the labor law, Chen Yang, a partner with Lantai law firm in Beijing told CGTN. 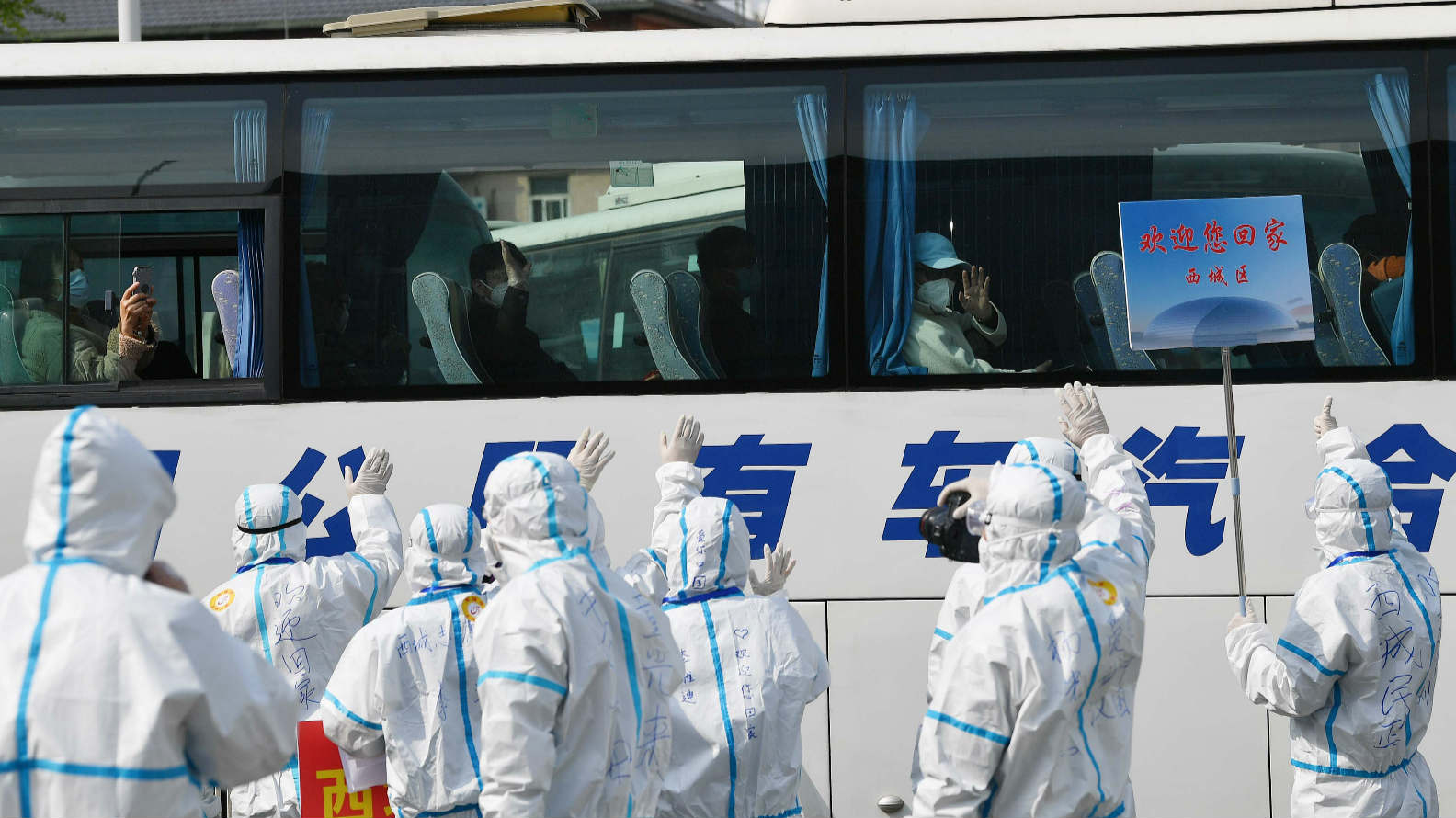 Volunteers in protective suits wave to people who returned from Wuhan to Beijing on April 8, 2020. /VCG

Volunteers in protective suits wave to people who returned from Wuhan to Beijing on April 8, 2020. /VCG

"The coronavirus outbreak has had a very profound impact on people," Chen said.

She said "laborers" from Hubei who face discriminatory treatment can take to people's court in accordance with the Chinese Employment Promotion Law, or file a complaint with the labor inspection department.

"It is employment discrimination if laborers are refused only because they are from Hubei. In China's judicial practice, there are also cases in which the exclusion of laborers from certain regions constitutes discrimination, and the court judges the company to bear legal responsibility," Zeng Tieshan, from China Commercial Law Firm in Shenzhen, told CGTN.

The country has adopted various measures to minimize the impact of economic downward pressure on employment caused by the epidemic. In the case of confirmed infections, suspected cases and close contacts, employers should abide by labor laws to fulfill contracts and pay wages. Enterprises facing difficulties can stabilize labor relations by adjusting salaries, rotating shifts and reducing working hours after consulting with employees to avoid or reduce layoffs. Authorities have also introduced social security reliefs, unemployment benefits, and tax incentives. 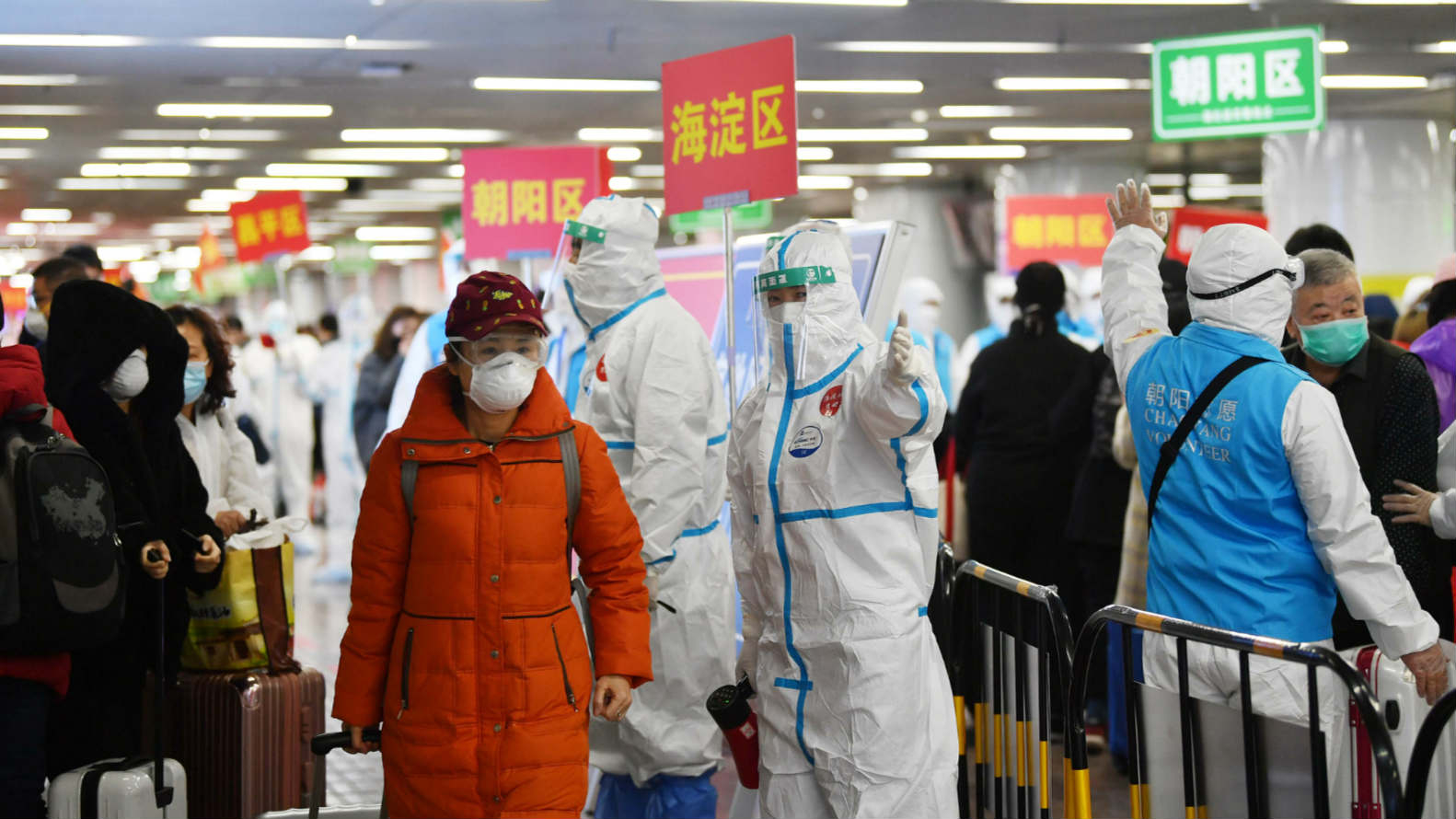 Volunteers in protective suits welcome people back to Beijing from Wuhan on April 8, 2020. /VCG

Volunteers in protective suits welcome people back to Beijing from Wuhan on April 8, 2020. /VCG

To each, their own problem

"In spite of supportive policies, a number of enterprises still have a very hard time. Meanwhile, enterprises could also be concerned about infection spread after work resumption," Chen told CGTN. "So we cannot rule out that some companies will carry out discriminatory treatment due to various concerns."

"A considerable number of employees in our company are from Hubei. The work resumption had been delayed, because they were unable to get back to work. Some positions like purchasing managers, marketing executives, accountants and warehouse keepers are very important, and some had to return for work," said Wang Xiu*, a manager at a Beijing-based company that provides supplies to hotels and restaurants.

"Now, six of them have come back and are under mandatory quarantine. The company has to pay for their quarantine and buy them daily goods," Wang said. 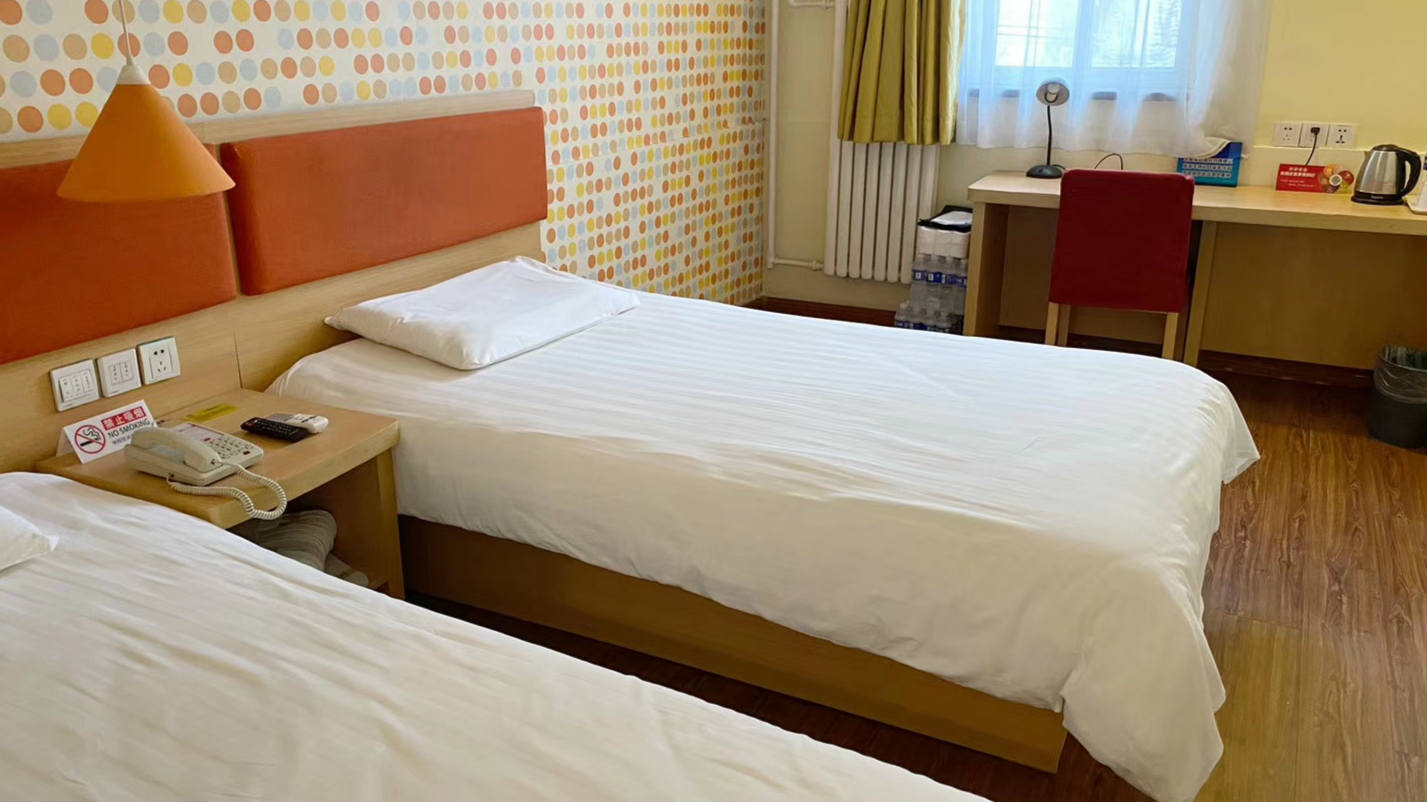 A hotel room for mandatory quarantine in Beijing. /Photo courtesy of Yu Fei

A hotel room for mandatory quarantine in Beijing. /Photo courtesy of Yu Fei

Although the government has introduced supportive measures to companies like Wang's, there are a number of obstacles before real benefits are seen.

"For example, the company could have applied for rent reduction, but the landlord just didn’t want to help us with application," Wang told CGTN. The rent accounts for 50 percent of the company's costs, and employees' salaries make up 30 percent.

"The company, without any income, has paid basic salaries to employees since January. And if the situation continues, the company will go bankrupt in June. We are trying to transform our business, and sell hotel supplies through livestreams. But we failed the first show last Tuesday. It is really hard to run a business," Wang sighed.

Things are slowly but surely getting better. Over three million people are now back to their workplaces outside Hubei, and the province has arranged more than 22,000 chartered buses and 60 trains to send roughly 630,000 migrant workers directly from their homes to factories, according to the provincial department of human resources and social security.