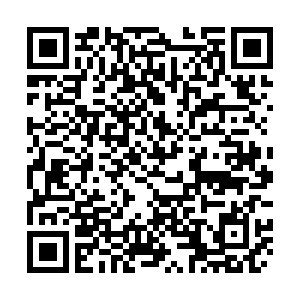 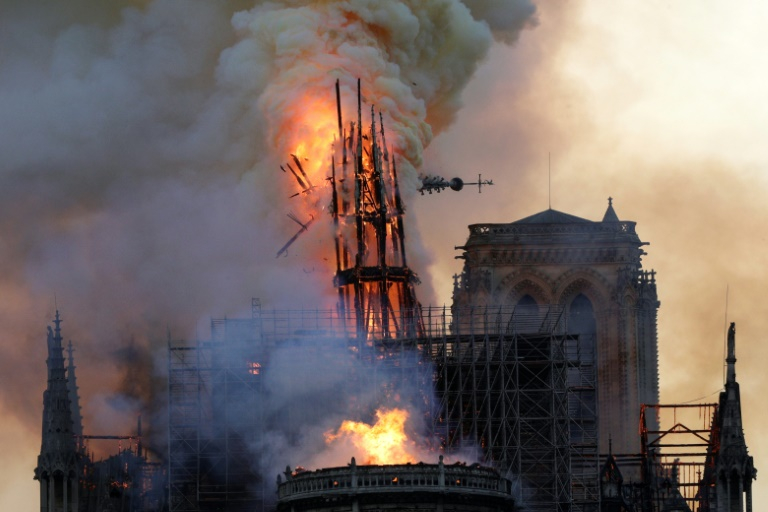 The steeple and roof of Notre-Dame in Paris collapsed during the fire that devastated the cathedral, April 15, 2019. /AFP

The steeple and roof of Notre-Dame in Paris collapsed during the fire that devastated the cathedral, April 15, 2019. /AFP

Perched over the gaping roof of Notre-Dame, a crane stands idle above the silent Paris cathedral, where repair work has ground to a halt one year after the monstrous blaze that nearly destroyed one of the world's most revered monuments.

Millions around the world watched in horror last April 15 as firefighters battled through the night to save the 13th-century masterpiece from the fire, which ravaged its roof and toppled the steeple.

French President Emmanuel Macron promised a herculean effort to have the UNESCO heritage site restored within five years, in time for the Paris Olympic Games in 2024.

But France's lockdown to contain the spread of the coronavirus – which has forced a full suspension of work at the site – is making that goal even more unlikely than before.

Work had already been delayed for months by decontamination efforts after more than 300 tonnes of lead from the roof melted in the blaze, covering the site in toxic particles that have proven hard to remove. 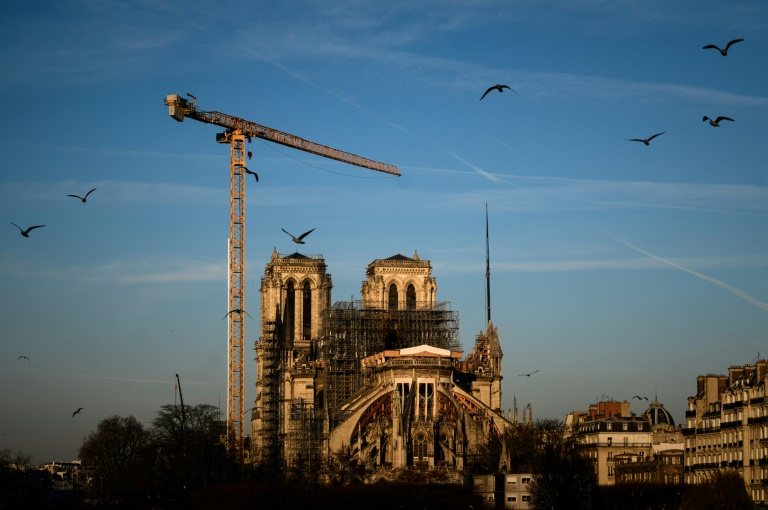 The crane set up on Notre-Dame's southern flank has stood silent since the nationwide coronavirus lockdown was announced in March. /AFP

The crane set up on Notre-Dame's southern flank has stood silent since the nationwide coronavirus lockdown was announced in March. /AFP

And the fragile structure remains at risk despite the massive wooden beams propping up the arches and gables. Authorities had to halt work several times over the winter when winds surpassed 40 kilometers per hour (25 miles per hour).

The 60 to 70 workers normally on site have not even removed the tangled web of metal scaffolding tubes that fused together in the inferno, which erupted during renovation work on the roof.

Until they do, they cannot install a more durable temporary roof to protect the church's priceless artworks from rain.

Although investigators have still not determined the cause of the fire, prosecutors suspect faulty electrical wiring or a poorly extinguished cigarette.

Jean-Louis Georgelin, the five-star general and fervent Catholic in charge of the renovation, is hoping to resume work soon, perhaps by his "squirrels," who hang by ropes to reach areas where it is too dangerous to walk.

"For these technicians, these tightrope walkers, social distancing is part of the job," Georgelin said. 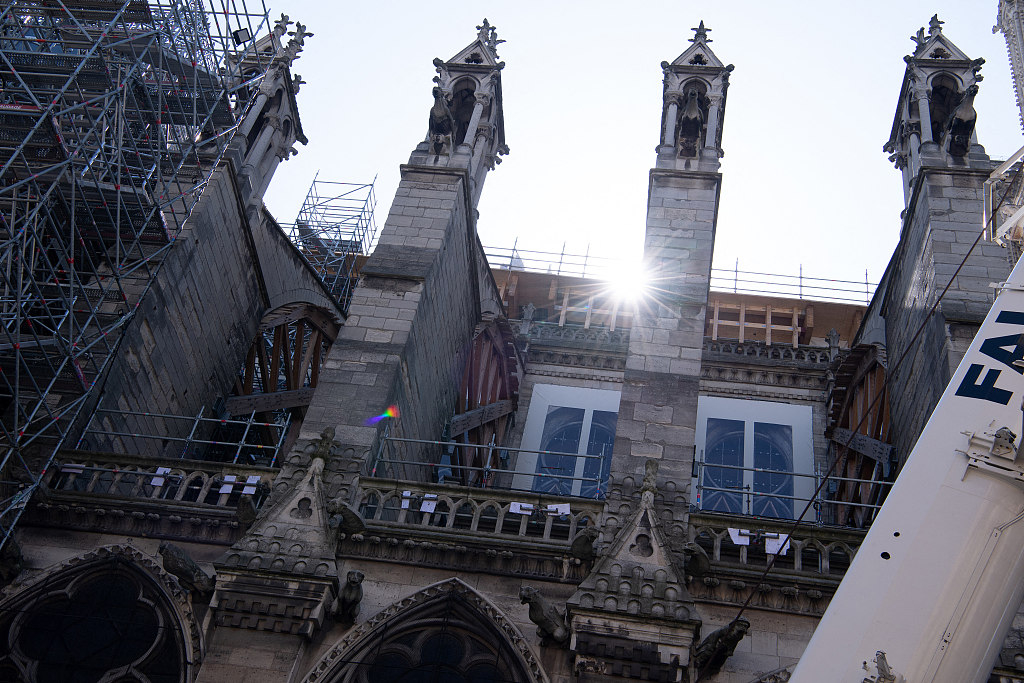 Much of the debris has been removed from the nave, which allowed Paris Archbishop Michel Aupetit to hold a small Good Friday ceremony in the church last week.

But mounds of debris still have to be cleared above the massive vaulted roof, a more delicate operation that was supposed to be finished this summer.

Notre-Dame's renowned organ must also be removed to have its nearly 8,000 pipes painstakingly cleaned from the layer of lead dust deposited by the melting of the roof and spire.

Countless other cleaning and restoration operations await, and the project's chief architect Philippe Villeneuve has warned that new challenges could arise as the work progresses.

Even the esplanade in front of Notre-Dame remains off limits, surrounded by a tall fence to keep tourists far from the worksite. 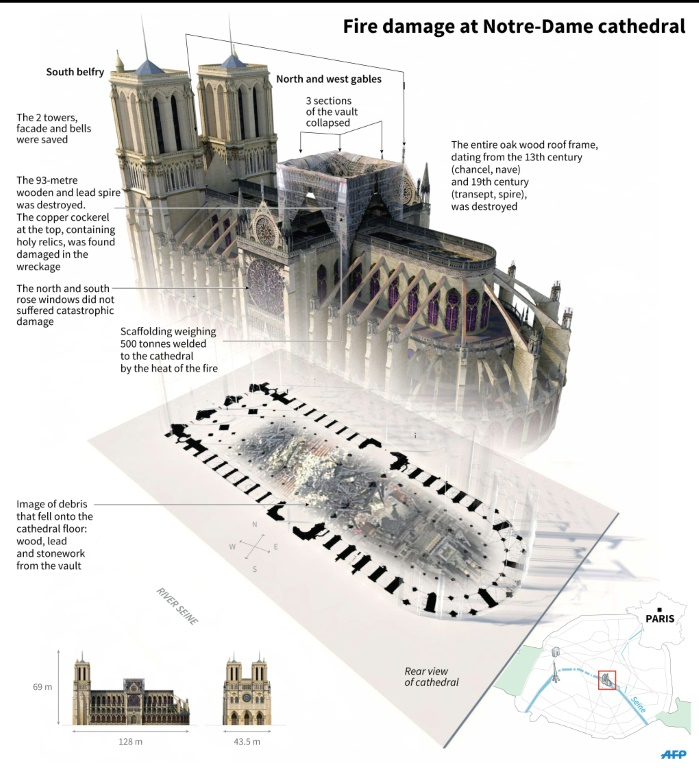 Yet Georgelin said he remains confident the five-year goal will be met despite the coronavirus delay, promising that worshippers will hear a "Te Deum" sung in the cathedral in April 2024.

"Lots of people said we'd cut corners to finish in five years. These are malicious comments. It's a question of carrying out the work assiduously, without any hesitation," he said.

Yet officials still have to decide a crucial question: Rebuild the cathedral exactly as it was, using traditional techniques and materials, or incorporate modern equipment and expertise?

Macron has said he is in favor of adding a "contemporary" touch to the spire, which was itself a relatively modern touch, installed by the architect Eugene Viollet-le-Duc in the mid-19th century.

Villeneuve has refused to countenance any glass spire, rooftop garden or any other proposals that have emerged. Opinion polls suggest most French share his more conservative view.

Macron has promised to "consult" the French on any choice for the steeple, and launched an international architectural competition for its reconstruction, though no timeline has been set. 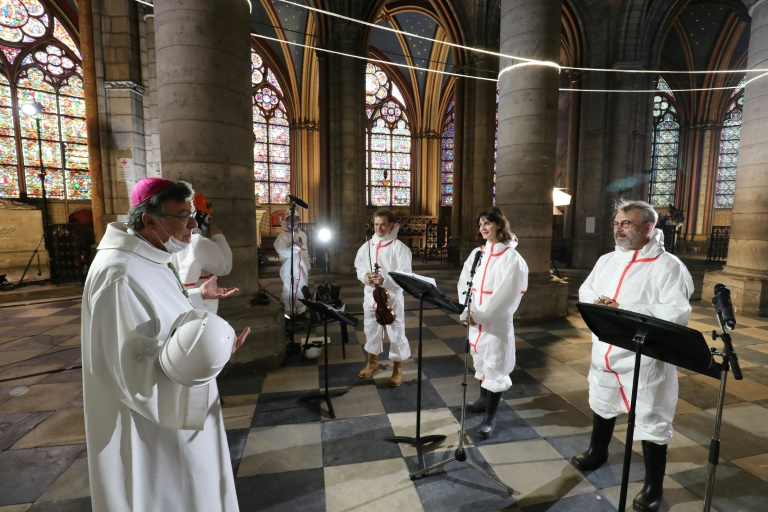 There is also the matter of replacing the lattice of oak beams that supported the roof - Georgelin raised hackles in January when he dismissed "lobbying" by the wood industry for an exact replica.

Whatever the choices, money should not be a problem – more than 900 million euros (nearly one billion U.S. dollars) has been given or pledged by some 340,000 companies and individuals worldwide.

"Everything makes me think we will definitely need that money," Georgelin said.

Yet the funds won't help the restaurants, souvenir shops and other businesses on the island in the heart of Paris, said Patrice Lejeune, president of the Notre-Dame business alliance.

They have seen two-thirds of their revenue evaporate on average over the past year, he said.

"You have people who have worked 50 years, and here they're on the brink after just one year," he added.

No commemorations are planned to mark the anniversary of the fire, in line with the ban on public gatherings during the coronavirus crisis.