Tantrums and bonds: How families are dealing with COVID-19 quarantines
By Liane Ferreira 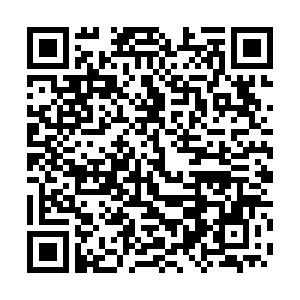 "It was like life stopped having a calendar and only yesterday, today, and tomorrow exists," said Inês Sousa, echoing what many parents across the world must feel. The mother of two small boys manages the children, her job and housework, all at the same time and in the same place: her apartment in Lisbon, Portugal.

With the coronavirus pandemic disrupting every moment of people's lives, normalcy is the family's goal. For families with children stuck at home, school routines, park visits or playdates are on hold, and their apartments are now the center of the universe; they are the school, the park, the playground. 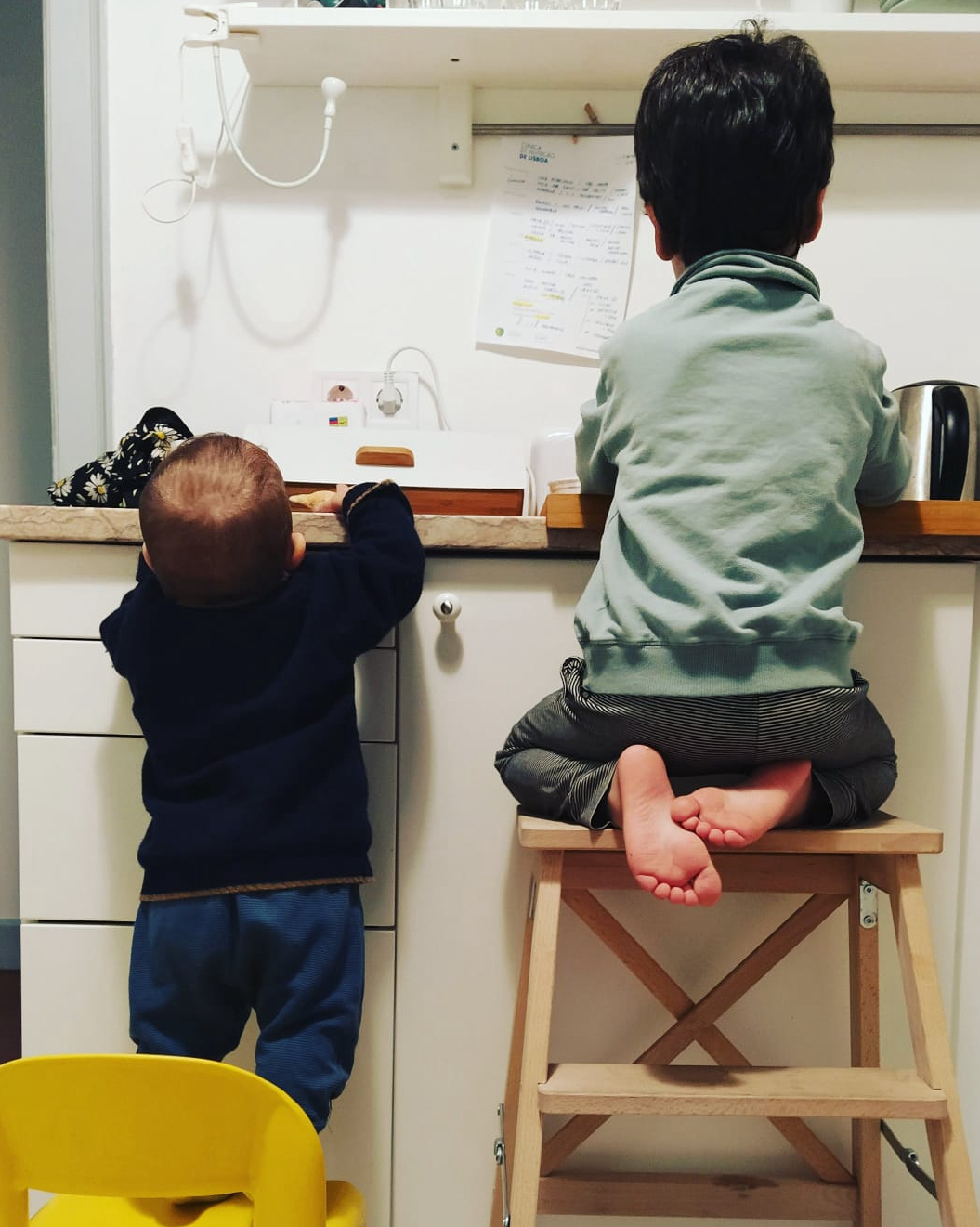 Manuel and Afonso in the kitchen. / Photo courtesy of Inês Sousa

Manuel and Afonso in the kitchen. / Photo courtesy of Inês Sousa

First days are the worst

The "first days were hard," said Sousa. Her oldest son, Afonso, was already at home with the chickenpox, but when isolation orders came in, she and her husband "had to normalize" the situation.

"The hardest thing in the first week was the shift in freedom of movement, and second, we had to manage our expectations in terms of work from home productivity," she told CGTN Digital.

The most important thing they had to do was "align emotional and rational elements to a new context."

To achieve this, the TV was turned off, but exceptional times call for cartoon time. "Now, I'm calmer, but when this apocalyptic scenario started, I just wanted to create this home paradise," she said.

The couple explained to four-year-old Afonso what the virus is, that they had to be extra careful outside and everyone he knows is also at home. "He understood it really well, and when we leave the building, he understands the restrictions in the park and is the first to open the building door with his elbow," Sousa said.

Her other child, Manuel, is a baby, so he needs no explanations.

The parents also created a daily schedule. "I have five hours exclusively for my PhD and one hour after the kids are asleep. My husband, Kiko, has the rest of the day for work. We also set aside a night for the couple, which means that after the kids are asleep, we don't work; we have some time for us to watch a movie or just talk," she explained.

The schedule is also important for Afonso "to understand what hours and days are because of the tantrums." He also needed to know what to expect each day. To keep busy, they baked, drew, did a treasure hunt, and even made a present for his grandmother.

Looking back, the first four days were full of tension, frustration and anxiety, but the dynamics are now in place.

For Sousa, isolation has been an opportunity for the family to spend more time together. "We are spoiling and being spoiled with affection, and it has strengthened the respect we have for the work, time and space of each other." 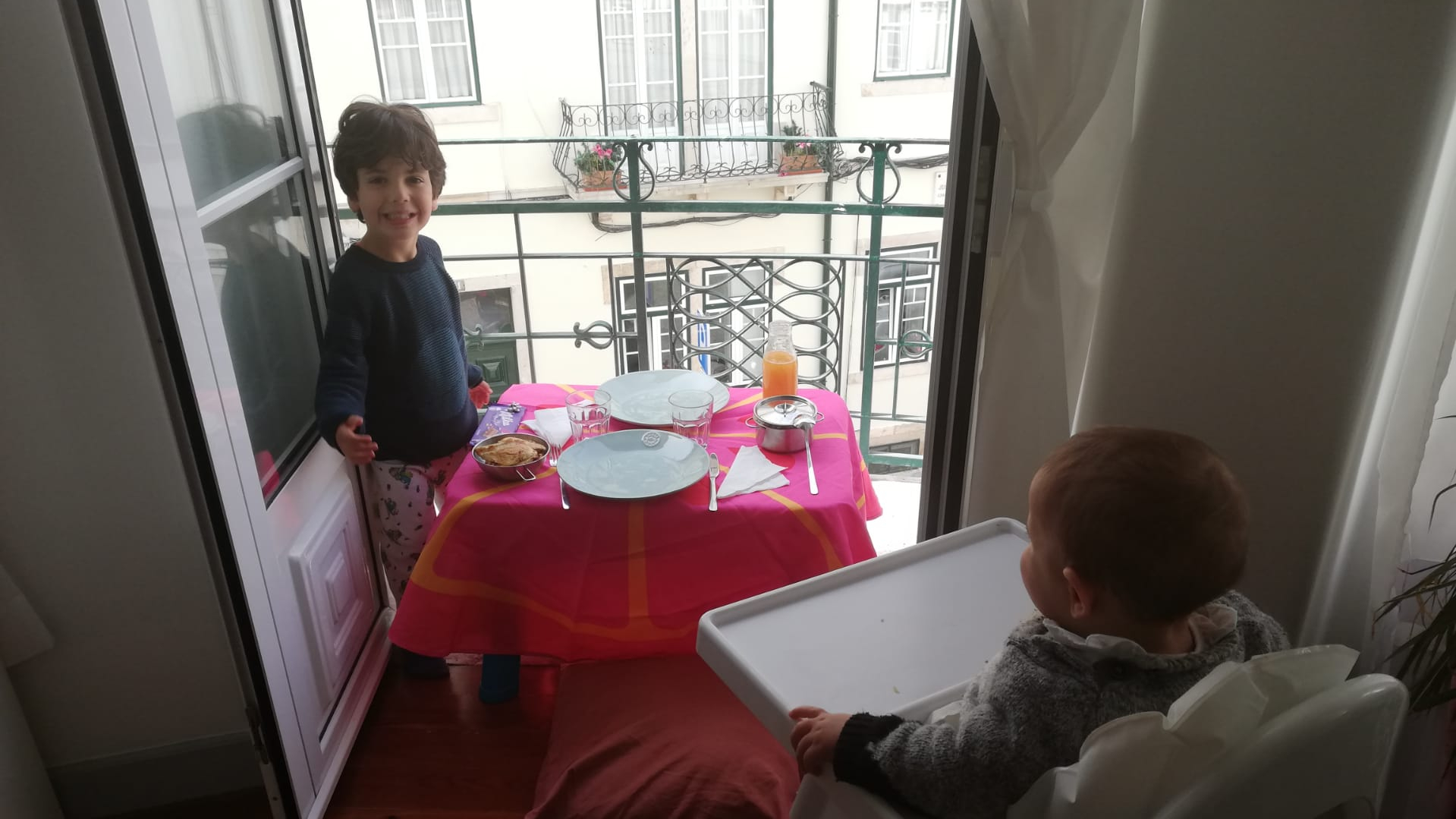 Lunch on the balcony. /Photo courtesy of Inês Sousa

Lunch on the balcony. /Photo courtesy of Inês Sousa

Eleven thousand kilometers away, in the Macao Special Administrative Region of China, Charlotte, the mother of an almost five-year-old named Amy, feels the same way after more than two months in isolation. They are closer, but it was a rough start.

"At the beginning, it was really hard. I'm a teacher, so I had to schedule my online classes for when she was asleep. We decided to put her to bed a little later, and I would gain more time in the morning to teach on Dingtalk. Sometimes, she would wake up and scream for me, and my students would hear everything," Charlotte told CGTN Digital.

The mother admits Netflix is her "salvation."

"Besides, she likes to show up in front of the camera and make her presence known," the mother said with a chuckle.

With the end of the semester classes and her PhD at the same time, she confesses it's hard to balance everything. 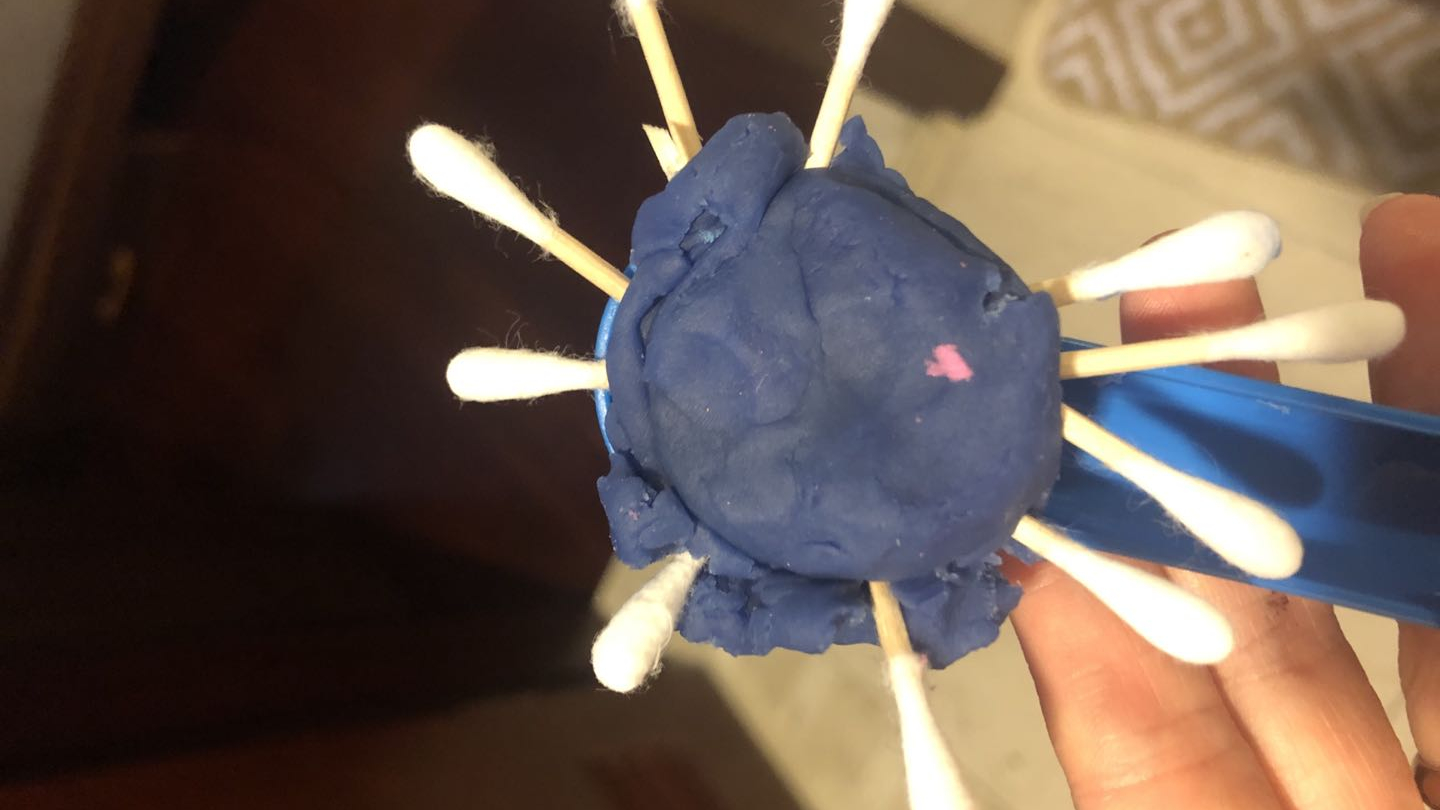 A Play-Doh version of the coronavirus done by Amy. / Photo courtesy of Charlotte

A Play-Doh version of the coronavirus done by Amy. / Photo courtesy of Charlotte

"My husband stays at home with her, and for him, everything is spontaneous. When I'm with her, I try to organize a bit, drawing, painting, sometimes she helps me in the kitchen," she said, adding that Amy even made a coronavirus with Play-Doh.

Charlotte feels that their mother-daughter relationship is stronger, and they are closer. "She understands more about my job. Sometimes, she sits by my side and 'writes' a few lines in her notebook. I feel she is more aware of what a job is and talks a lot about what she wants to do in the future."

Away from her normal routine, Amy misses the school and her friends. "The other day, her friend came over for a playdate, and she was extremely happy," she said.

Recently, the mothers organized playdates through WhatsApp. Amy and her best friend played with the toys and talked at the same time, like they were together.

Not new, but still complicated

In a different time zone, a family of five, although not new to the work-from-home dynamics, faces similar challenges. Up until September 2019, Ana, a freelance translator with a three-year-old son and young twin couple, had her children at home with her. Her husband, a lawyer, also worked from home twice a week.

"Even though I already knew what to expect, the shock of having everyone at home full-time was still big," she told CGTN Digital.

"For them to stay at home for a month in a three-bedroom apartment with the parents is a huge challenge," Ana noted, explaining that the children's' schools promote frequent outdoor activities.

It's a big test to find activities that motivate them, and, at the same, it's a challenge for her "not to go down on a negative spiral," she admitted.

After 25 days at home, the children were more irritable and threw more tantrums. "It's not as easy to manage, and they end up watching more television," she said, adding that TV time was a necessary compromise. 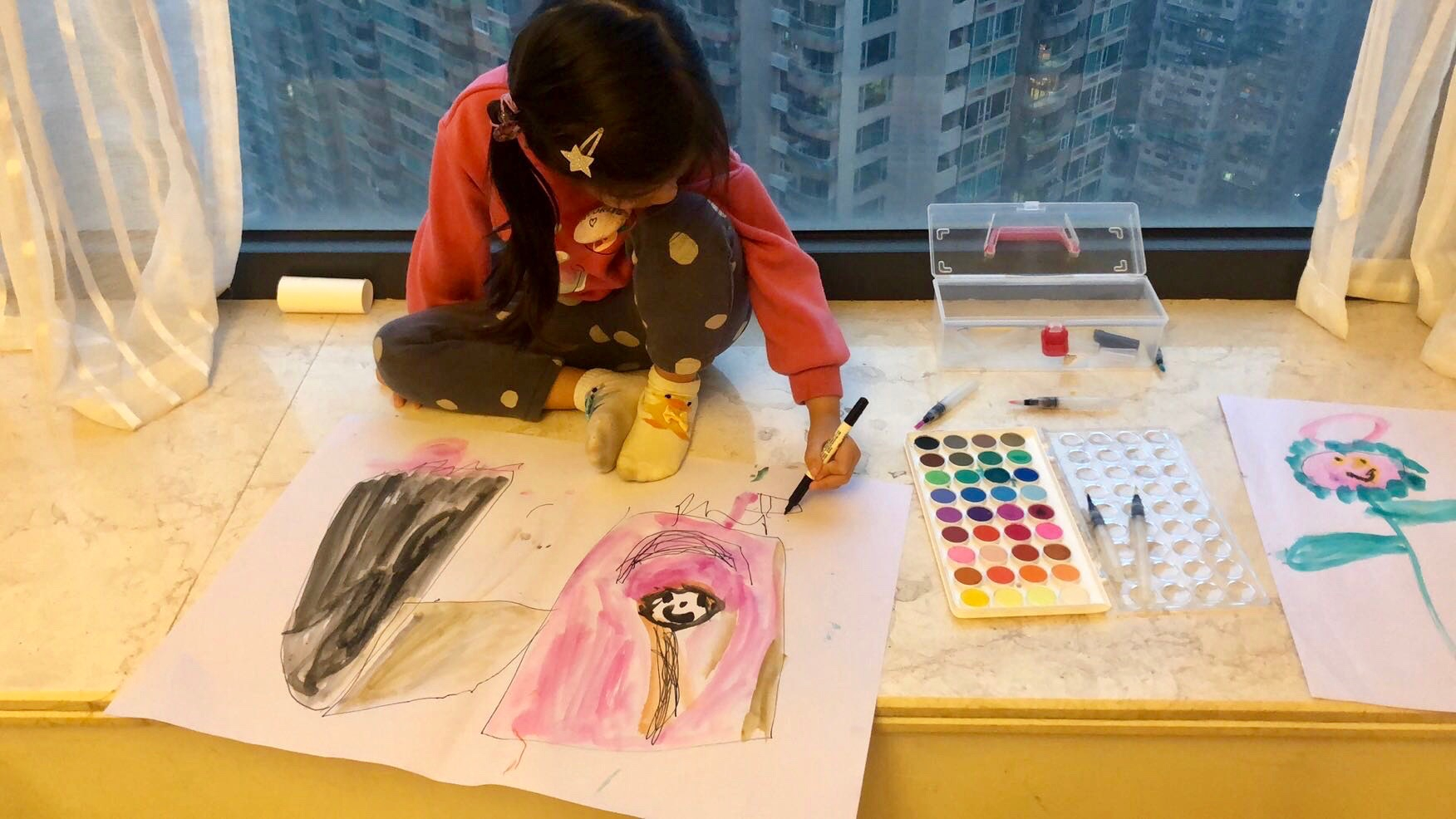 Amy draws at home to entertain herself during the quarantine period./ Photo courtesy of Charlotte

Amy draws at home to entertain herself during the quarantine period./ Photo courtesy of Charlotte

"They are small and don't get entertained with calmer activities, like drawing, they get tired of that really fast," Ana said, confessing that "it's really hard for me and my husband to get any work done."

The already strict schedule they had was maintained after social isolation started. But by the end of the second week, they realized no outdoor activities meant more energy and less sleep, so the parents had to be flexible with bedtime.

"When my husband is with them, for example, for bath time, I take care of all my emails. Naptime is also a very productive time for both of us. I opted for no calendars, because it brings me more peace and flexibility."

The couple explained what is happening, but only their older child had questions about his teacher and his friends. Afterward, he seemed to understand that he couldn't be with them because of the coronavirus.

Read more: COVID-19 has families at home under stress: Tips on parenting

"He asked if coronavirus was like those small bugs in the hair, he meant lice. I said no, it isn't, and at that time, I was actually happy I didn't have to worry about that," the mother admitted.

In contrast to other parents, Ana doesn't think their family bond will be reinforced by their time together.

"Working from home was a professional choice I made focused on the family. I didn't go from an absent situation to a complete present one," she said.

"I think this permanent coexistence is a bit tiring and enhances our frustrations as parents," she noted, adding that the couple must communicate and stay calm.

"When they go back to school, I will miss them dearly because now we are together all the time. It's a matter of habit," she said.

Ana has less work and expects even less in May. "This is a bit worrying, financially wise, but it will give me more time to play with them."