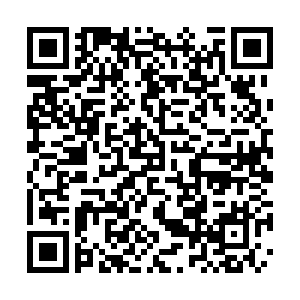 Some 44 million South Koreans are expected to go to polls on Wednesday wearing masks and sporting plastic gloves to elect the National Assembly for the next four years amid the COVID-19 pandemic.

There will be 253 directly elected seats and 47 proportional representation slots up for grabs as voters will be casting two ballots – for both a candidate and a political party.

President Moon Jae-in's Democratic Party (DP) currently holds 120 seats in the 300-seat National Assembly, and is seeking to secure a majority in the election. The main opposition, the conservative United Future Party (UFP), holds 92 seats and is also seeking to seize a majority.

The country reported 27 new cases on Monday, and brought the nation's total infections to 10,564, according to the Korea Centers for Disease Control and Prevention (KCDC).

South Korea is pressing on and trying to balance people's safety with the electoral process, while most countries have delayed elections due to the virus.

So how is COVID-19 affecting the election and what does the vote mean for President Moon? 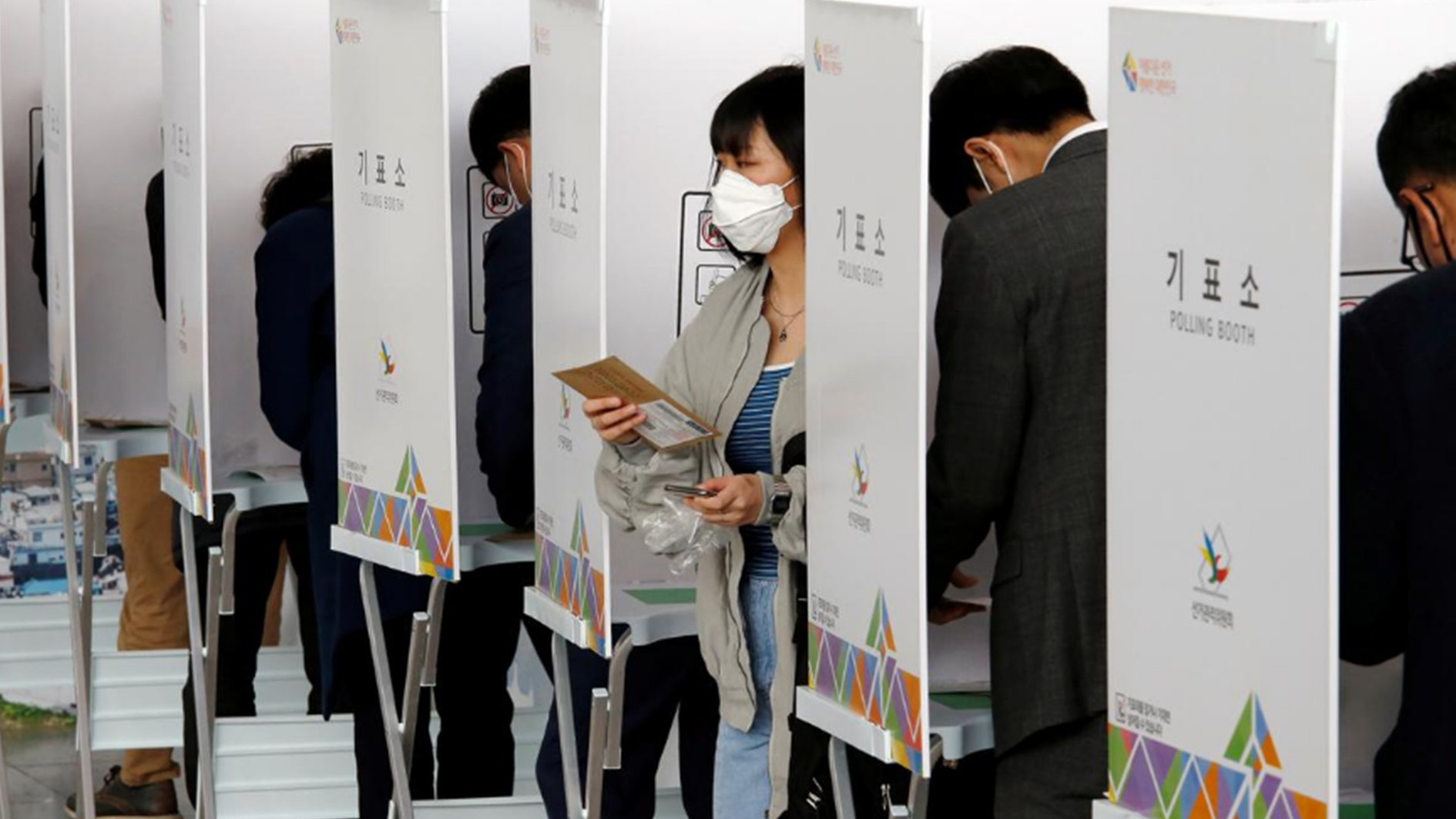 The pandemic has changed the way how candidates campaign and shift focus on the government's response to COVID-19.

Political parties have campaigned in a limited manner during the 13-day campaign period, which will last until the eve of the election, said the National Election Commission (NEC).

During the campaign, the DP appealed for support for the government's ongoing efforts to contain the coronavirus and pledged measures to assist smaller firms and business owners hit hard by the pandemic, reported Yonhap.

The UFP called for the need to "judge" the government, claiming that the Moon Jae-in administration bungled its response to the virus and failed in economic and security policies.

The parliamentary elections will be held through 14,330 polling stations across the country, according to the NEC. 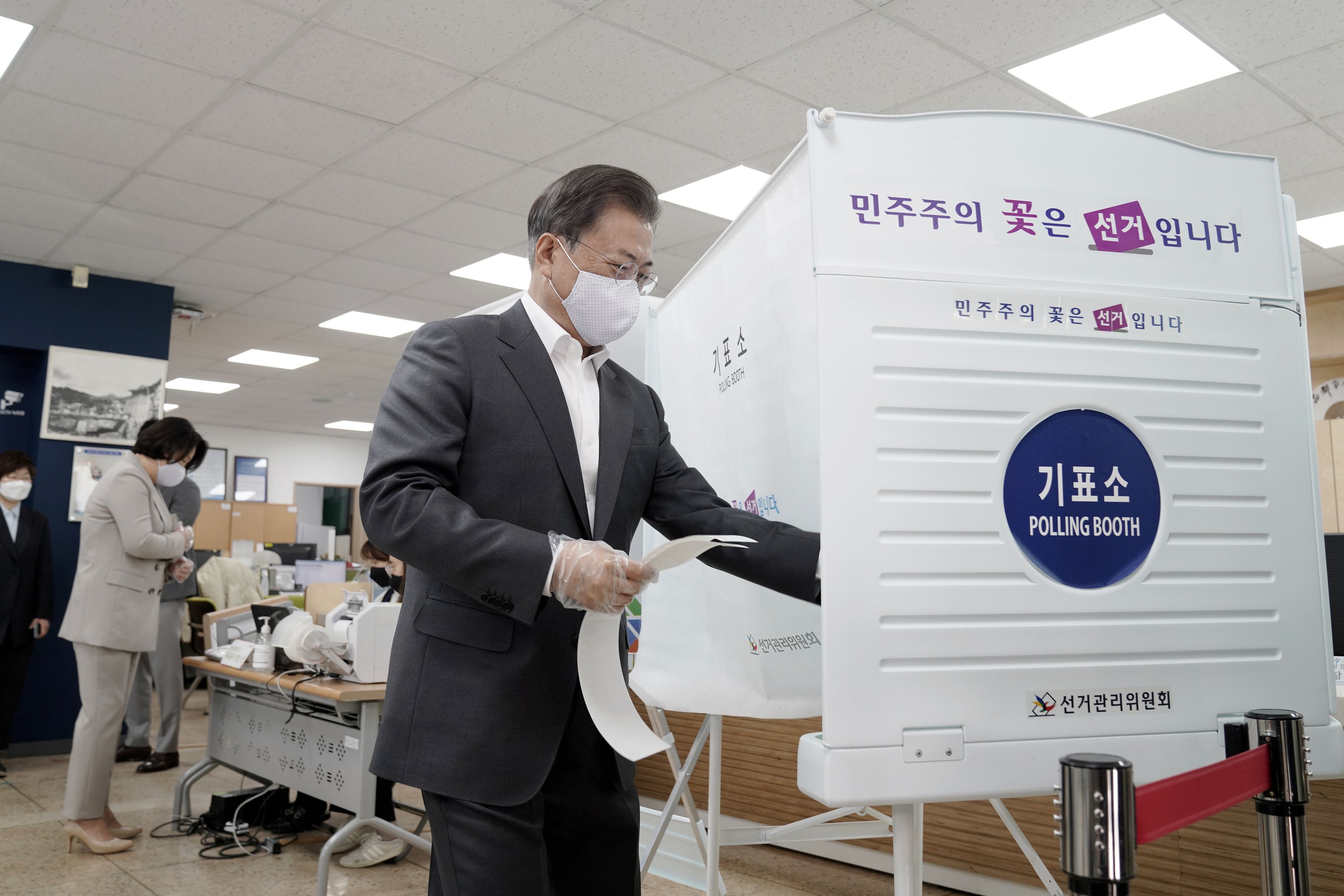 The watchdog urged all voters to wear mask in polling stations and make use of sanitisers and gloves available.

Voters will have their temperature checked at the entrance and should keep a distance of at least 1 meter from others while waiting to vote. Polling booths and ballot stamps will be disinfected.

COVID-19 patients being treated at hospitals and people in a two-week isolation period at home will be able to vote via mail if they apply to do so between March 24 and 28, according to Yonhap.

Roughly 4,000 coronavirus patients will be allowed to vote by mail or as absentees, according to Interior Minister Chin Young. 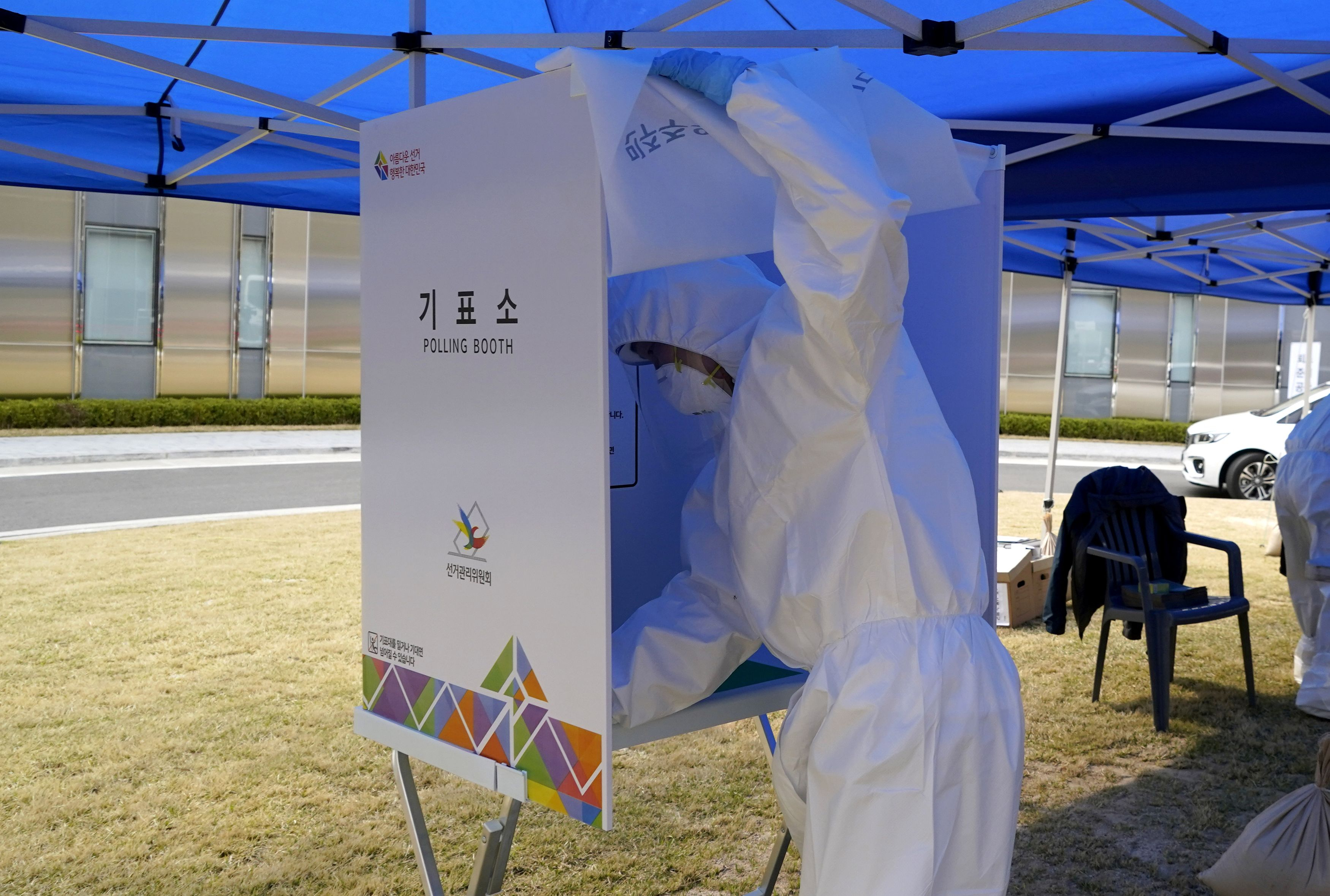 An election officer in protective gear disinfects a polling booth before South Korean patients infected with the coronavirus disease (COVID-19) arrive to cast their ballots for the parliamentary election at a polling station set up at a quarantine center in Yongin, South Korea, April 11, 2020. /Reuters

An election officer in protective gear disinfects a polling booth before South Korean patients infected with the coronavirus disease (COVID-19) arrive to cast their ballots for the parliamentary election at a polling station set up at a quarantine center in Yongin, South Korea, April 11, 2020. /Reuters

The quick global spread of the novel coronavirus has made it difficult for overseas Koreans to cast their ballots as more countries announced city lockdowns and border closures.

A total of 91 missions in 55 countries and territories have halted voting, including Seoul's embassies in India, El Salvador and Oman, and two consulates in Russia and Iraq, according to the NEC. An estimated 87,252 voters will be affected, accounting for 50.7 percent of eligible overseas voters.

About 86,000 eligible voters in 66 countries and territories cast their absentee ballots from April 1-6. Voting stations also opened at the embassy in Beijing and diplomatic missions in seven Chinese cities including Hong Kong, according to Yonhap.

The turnout tentatively came in at 26.69 percent as 11.7 million voters participated in two days of early voting that ran until Saturday, according to the NEC, marking a record high since the country adopted the advance voting system in 2014.

In a survey of 1,500 voters, 72.7 percent of the respondents said they would cast ballots in the upcoming elections, according to the NEC, 8.8 percentage-point up compared with the 2016 parliamentary elections.

What does the vote mean for Moon?

The election is widely seen as a "mid-term test" for President Moon, a "referendum" on his policies, as well as a barometer of voter sentiment ahead of the presidential election in 2022. Moon took office in May 2017.

If the ruling DP wins, Moon will have a firmer grip on the government during his final two years of the single-term presidency, enabling him to push harder on issues such as economic redistribution and engagement with the DPRK.

"After a likely DP election win, Moon will have a wider path to boost fiscal spending and enhance the social welfare system, but less room to raise the minimum wage or advance corporate sector reforms," said Scott Seaman, Asia director for Eurasia Group. "Relations with the U.S. and China will remain on an even keel, but tensions with Japan will persist."

And Moon's effective and swift response to the virus has brought a boon for the president, with his rating ascending to this year's highest of 53.7 percent, according to last Monday's poll.