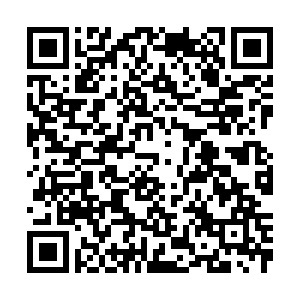 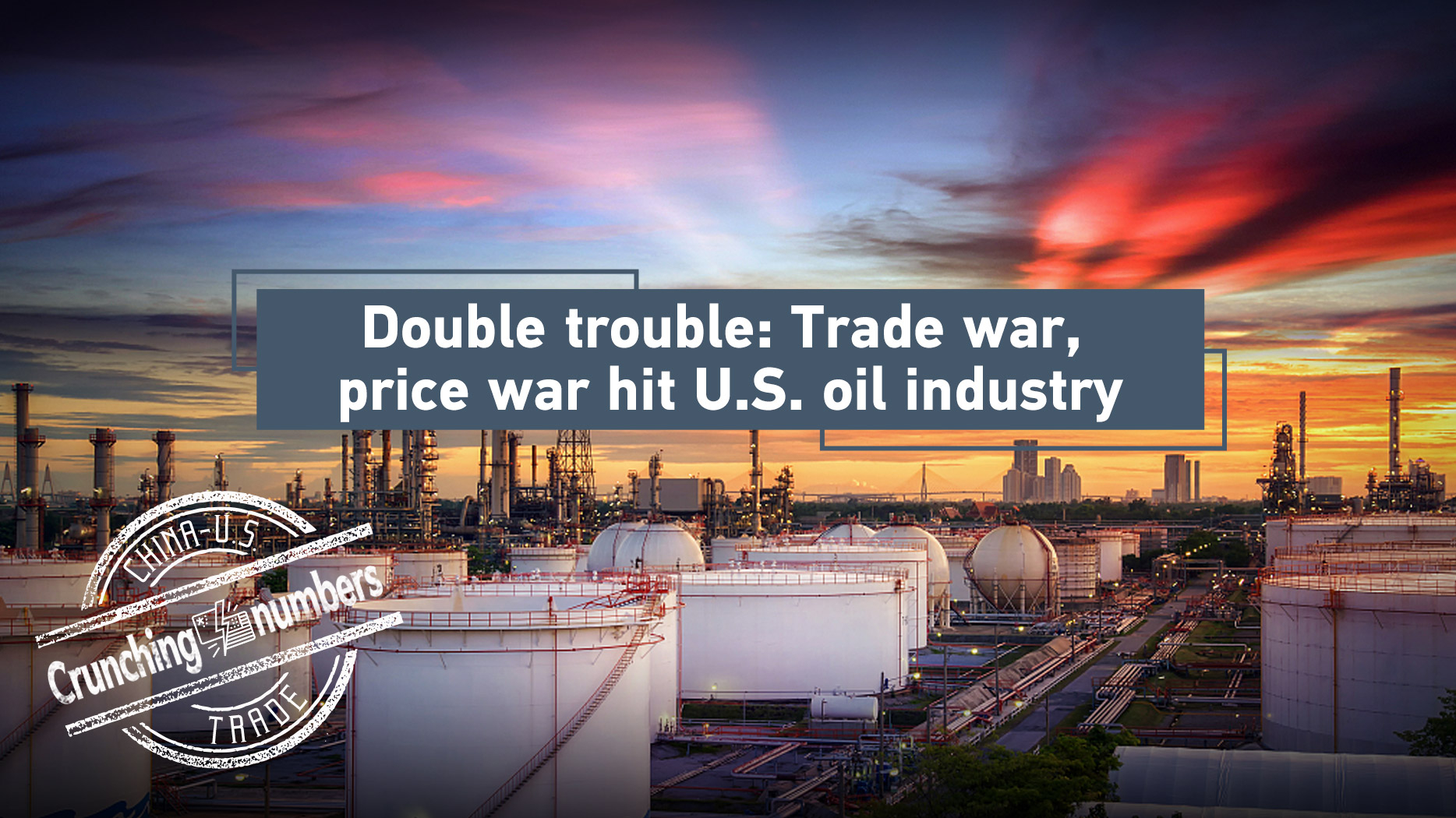 Incredibly, after crude oil prices began to plunge a month ago, one barrel of crude oil only cost 22.76 U.S. dollars on April 9, plummeting to one-third of the WTI crude oil's recent high prices. This should be due to the price war between Saudi Arabia and Russia, and the COVID-19 pandemic which created a sharp shrinkage of global oil market.

Whiting, the largest oil producer in an overwhelming U.S. oil-producing state, Colorado, declared bankruptcy on April 1. That incredible low oil price in the global market was the last straw for this shale oil star company, at a time when the U.S. shale oil industry is more vulnerable to low prices due to its higher costs. The "lifeline" of profitability is between 40-46 U.S. dollars, which is much higher than the current WTI crude oil price.

On April 12, 2020, OPEC+ tentatively reached an agreement to cut production by 9.7 million barrels per day, which is the single largest output cut in history. Job losses and bankruptcies appear certain for the U.S. oil industry, but this deal may put a floor under prices for now.

In addition to factors such as low crude oil prices, heavy debts and high mining costs, the long-drawn-out China-U.S. trade war is an important reason. 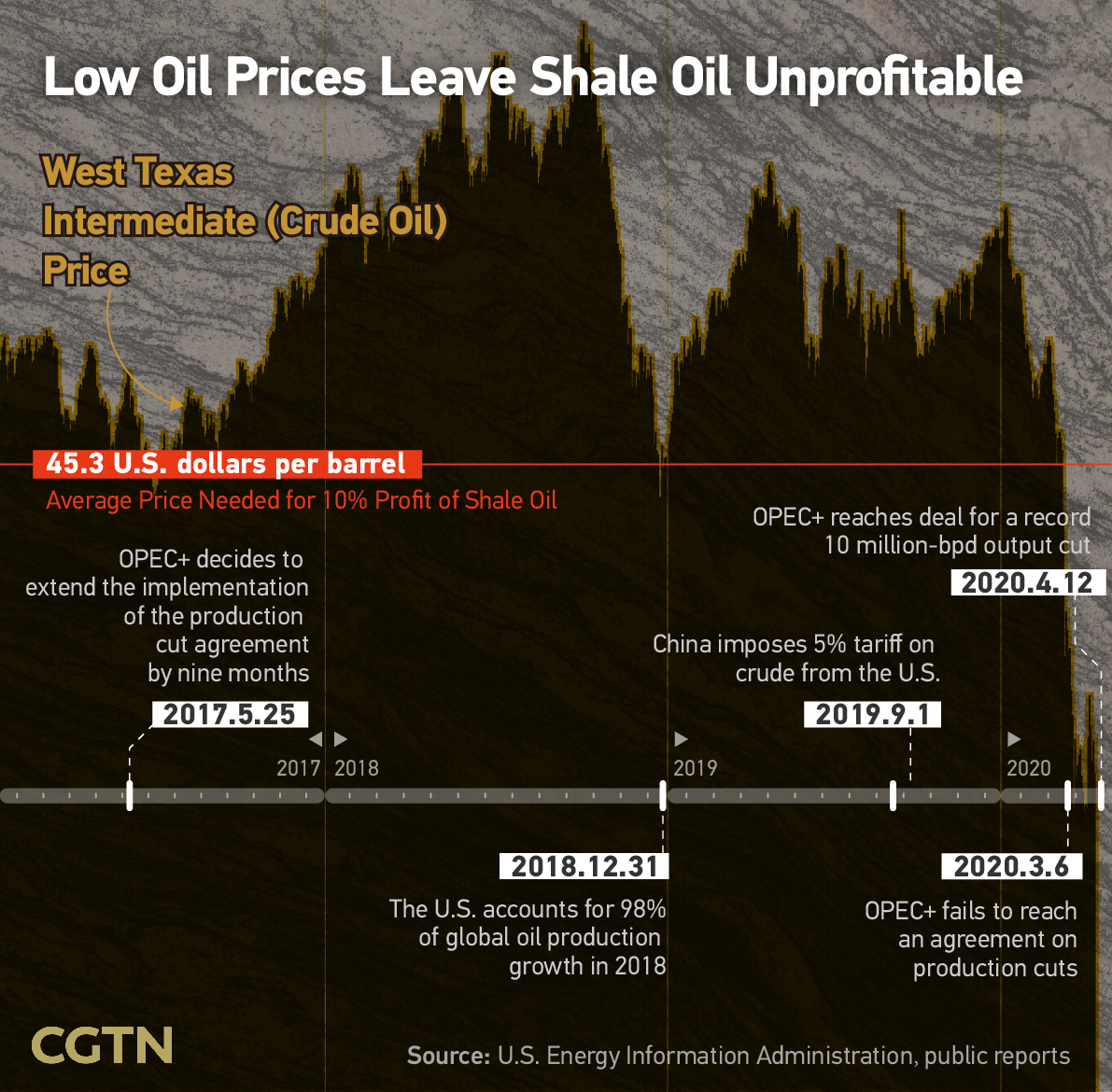 As the world's largest oil importer, China imports more than 10 million barrels per day. Attributed to a breakthrough development of shale oil extraction technology, the United States has surpassed Saudi Arabia and Russia in 2018 to become the world's largest oil producer. But the China-U.S. trade war forcibly cut off the huge attraction between production and demand.

In early August last year, U.S. President Trump threatened to impose tariffs on Chinese imports worth 300 billion U.S. dollars. In response, China officially imposed a five percent tariff on U.S. crude oil on September 1, 2019. The escalation of the China-U.S. trade war raised concerns of a slowdown in global oil demand, causing the market to fall into chaos. According to Forbes, crude oil prices suffered their largest drop in over four years. On January 15, 2020, China and U.S. signed phase one trade deal, and China has committed to purchasing at least 52.4 billion U.S. dollars in additional energy purchases within two years.

Before the China-U.S. trade war, China was the second largest importer of U.S. crude oil. In 2017, when crude oil was exported to China accounted for 19.10 percent of the total, the growth rate of all U.S. crude oil exports jumped to 95.36 percent. However, this growth declined to only 45.39 percent in 2019, which was lowered significantly by Chinese market at a 42.24 percent decrease.

U.S. reduced its oil exports to China by 35.6 million barrels from 2018, which is more than the total amount purchased by Singapore, the tenth largest buyer. Based on the average oil price of 57.09 U.S. dollars per barrel in 2019, the U.S. has lost 2.03 billion U.S. dollars in crude oil revenue due to the trade war. 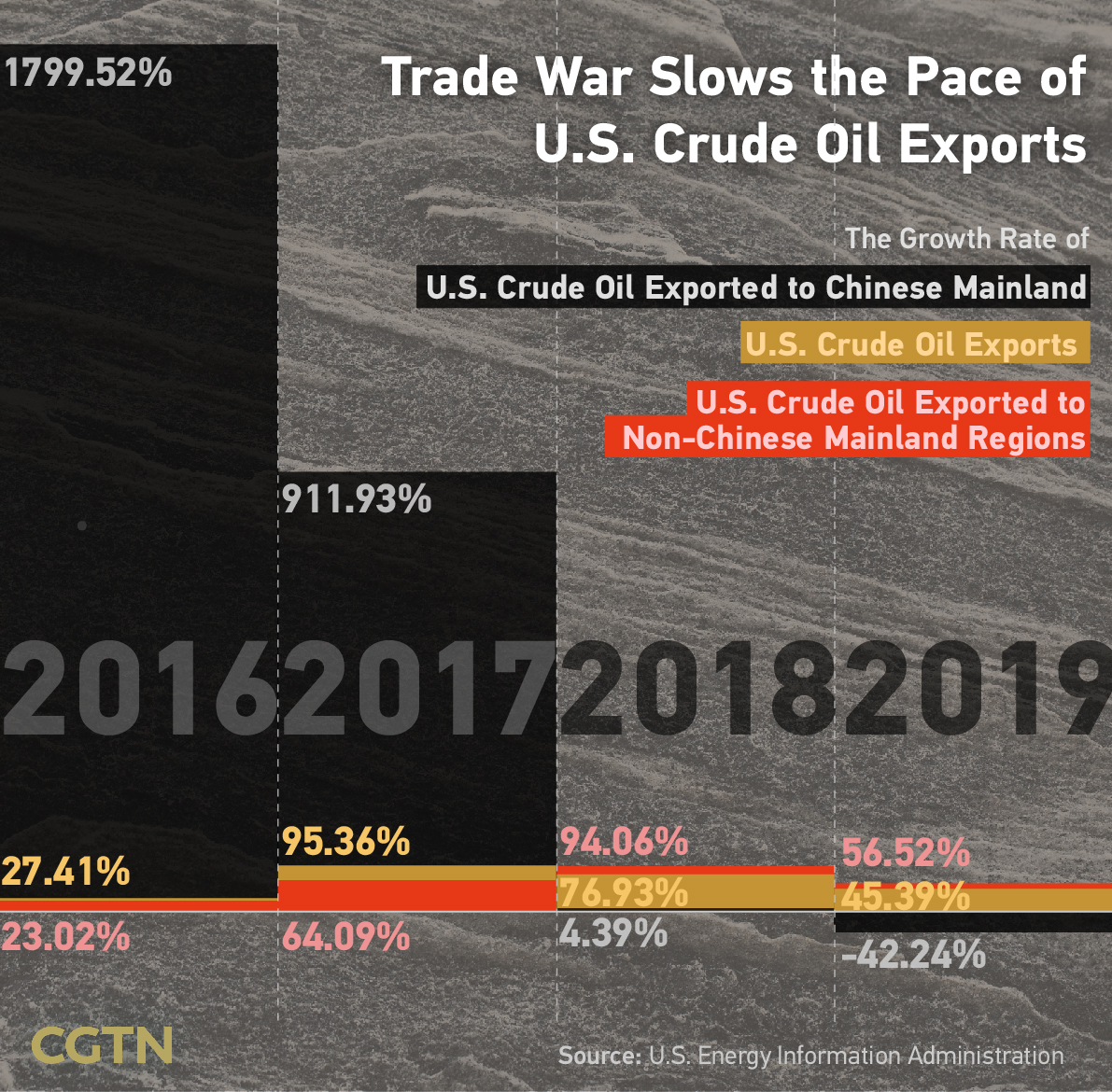 No alternative for the Chinese market

For survival, U.S. oil companies had to turn to alternatives to export oil. Compared with 2018, U.S. increased its crude oil exports to South Korea and the Netherlands by 67.26 million barrels and 54.31 million barrels in 2019, with growth rates at 76.2 percent and 113 percent respectively. 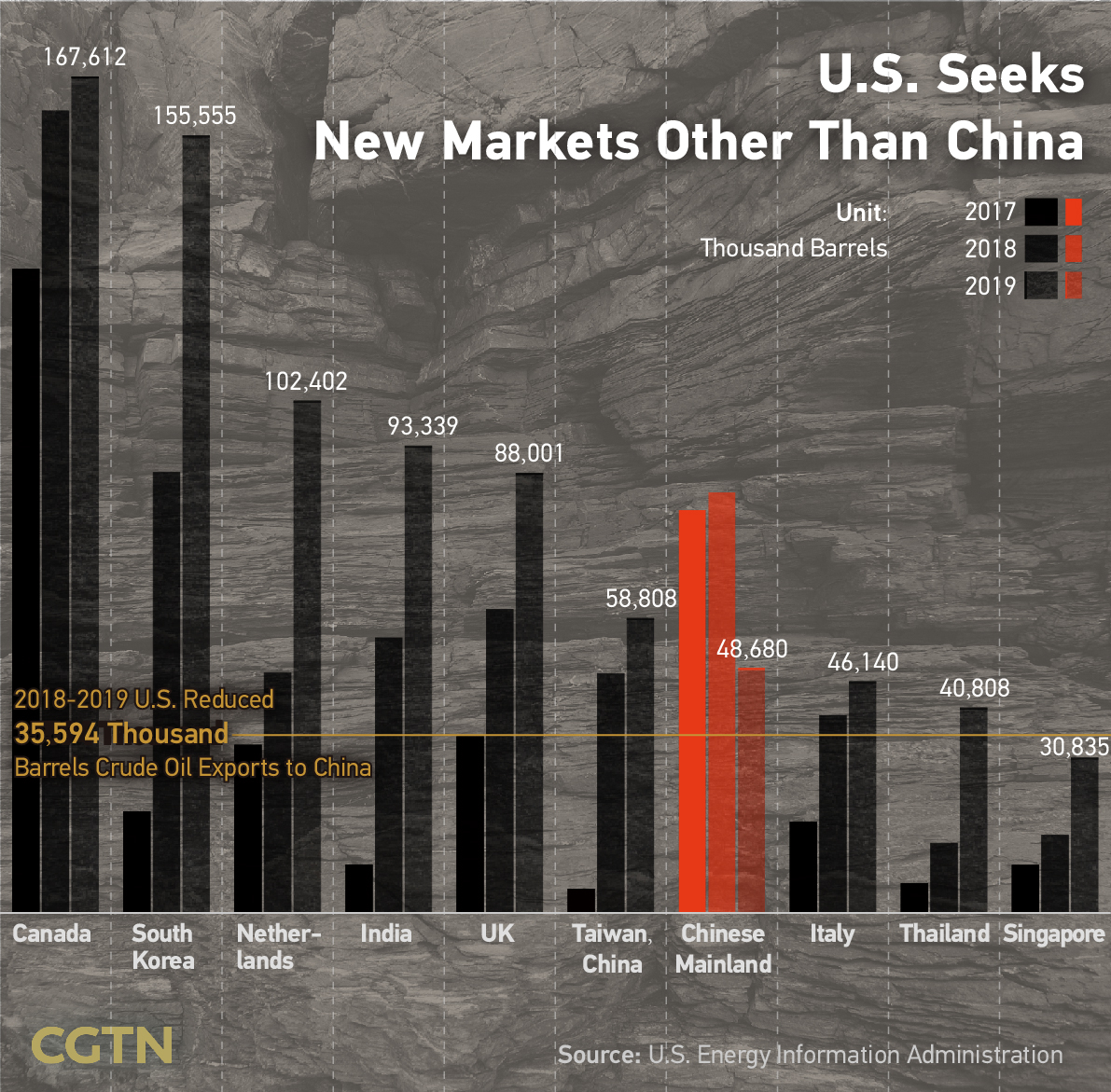 However, it's hard to replace China's crude oil market. The market size of South Korea and the Netherlands accounted for only 32.79 percent and 11.88 percent of China's in 2018 separately, according to a report from OPEC in 2019. The scale and potential of their oil markets are clearly far less than that of China.

To China, crude oil from U.S. seems not so necessary, which accounted for only 2.62 percent of China's total imports in 2017. As a result, China could soon reduce its purchase of U.S. crude oil and turn to Russia instead after the China-U.S. trade war broke out.

"With China being the world's foremost crude import growth region, U.S. producers need China, not the other way around,”Michael Tran, director of energy strategy at RBC Capital Markets in New York, said to Reuters in August last year,“The U.S. will have to find alternative buyers for their crude, which will be a challenge given the weakening global demand backdrop.”

Moreover, the China-U.S. trade war also increased the production cost of U.S. oil. According to an analysis from Forbes, some of the capital equipment comes from China. If a company is forced to buy more expensive material, it will impact capital budgets and result in fewer projects.