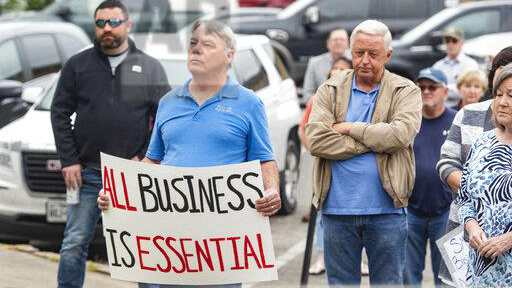 Glen Thurman, owner of Rose Hill Apartments in Mineola holds a sign reading "All business is essential" during a rally of people who want to see business restrictions loosened in sight of coronavirus restrictions and their effect on the local economy at the Wood County Courthouse in Quitman, Texas on Friday, April 17, 2020. /AP

Glen Thurman, owner of Rose Hill Apartments in Mineola holds a sign reading "All business is essential" during a rally of people who want to see business restrictions loosened in sight of coronavirus restrictions and their effect on the local economy at the Wood County Courthouse in Quitman, Texas on Friday, April 17, 2020. /AP

This week, President Donald Trump unveiled a plan ("Opening Up America Again") to rejuvenate the American economy and strategize a plan to return to some form of normalcy across the country over time. This three-phased approach seeks to provide some hope of logically moving across benchmarks and standards, with 14 day increments in between to ensure infection and death rates are steadily declining.

The embarkment of phase 1 includes maintaining stricter social distancing protocols, continuing reduced travel to only essential activities, and limiting gatherings to very small numbers. Phase 2 allows for resumed travel and larger gatherings (up to 50 persons) while preserving the social distancing practices. Phase 3 offers a return to normalcy albeit with a program in place to identify and isolate those still becoming infected.

In general, the program is safe and reasonable, with built in flexibility for each state or region to adopt its own determinations. Probably in its general guidance, it is the best America can do from the current position amid the peak of cases and deaths. However, serious concerns remain.

First, and most importantly, the coronavirus will determine when the clock ticks. Unless and until a vaccine or reliable therapy is created, the American economy will remain stuck in the social/physical distancing protocol that severely limits normal economic interactions. This map is still dependent on the natural course of the virus and its virulence.

Second, the United States government and the American people broadly speaking are unwilling and unable to adopt the much stricter quarantine and lockdown rules that were applied in parts of Asia like China, or the much more comprehensive testing regimen in South Korea. The "Asian" model across China, Japan, South Korea, and Singapore has found a public willing to don masks, to follow ordinances of central governments, to use technology to test and track, and hence to dramatically prevent or curtail the rate of infection and death.

Asia is better positioned to restart economic functions, which is now taking place on a managed and phased basis across the region, albeit with the concomitant risk of reinfections or returnees and visitors bringing new infections. 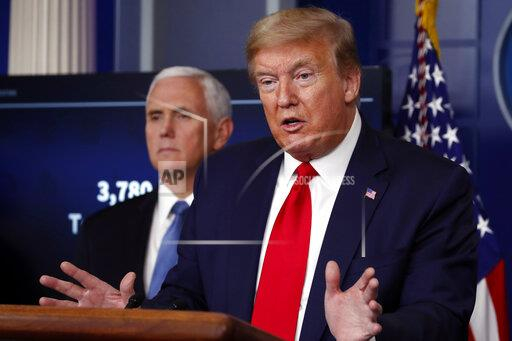 By contrast, Europe and the United States have not been able to seriously "flatten the curve." In the United States, a culture of individualism makes it near impossible to gain collective adherence to such guidelines, particularly the unfamiliar (wearing facial masks) or the burdensome (staying at home and not seeking work or entertainment). Moreover, the American federal system does not easily lend itself to centralized impositions, even in a crisis. President Trump's claim of total authority to determine when the economy restarts and society opens up was roundly criticized even among some of his own supporters, leading to this document that grants state governors free rein to "call the shots."

Indeed, this policy paper is more of a political document to assuage opponents and voters fearing a constitutional crisis, and to provide cover for rural or less populated states with conservative governors to re-open sooner. As President Trump said, Montana, Wyoming, and North Dakota are much different than New York and New Jersey. The likelihood of Trump's successful reelection in half a year dwindles the longer the economy remains closed.

In times of crisis, a president who offers steely resolve, steady focus, and reasonable explanations for common sacrifice may survive a poor economy. President Trump has proven time and again incapable of providing that type of leadership. Instead, his political fortunes appear desperately intertwined with this pathogen, dependent on its own course.

Thus, the economic contagion in America is really unprecedented, and the fate of the global economy remains gloomy. Distancing is neither a strategy to reopen an economy or to defeat COVID-19. Economic rejuvenation is dependent on medical and scientific research, or natural developments like herd immunity or the possibility of the virus disappearing or falling dormant like SARS before it.

This is not truly a plan to reopen the American economy. Major industries face collapse: tourism is destroyed, the cruise and airline industry may not recover, entertainment is absent; the global supply chain is in tatters; consumer spending is cratering and tens of millions are unemployed unable to spend nor to pay rent; schools are closed, hospitals are overwhelmed.

Addressing the myriad challenges is occurring through stimulus and bailout on an ad hoc basis, but a true reopening cannot occur for quite some time. The United States will need much more comprehensive testing at a minimum, then more systematic strategies for each affected industry, and then hope that it provides consumers and workers the confidence to rejoin the economy once its safe to do so. Science, innovation, and technology will not only have to be part of the solution, but also part of a transition to greater preparedness for the future, and indeed a larger part of people's daily lives.