Hit hard by virus, China still expected to be bright spot in global recession
By He Weiwen 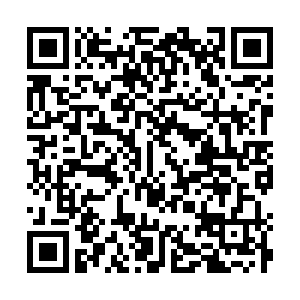 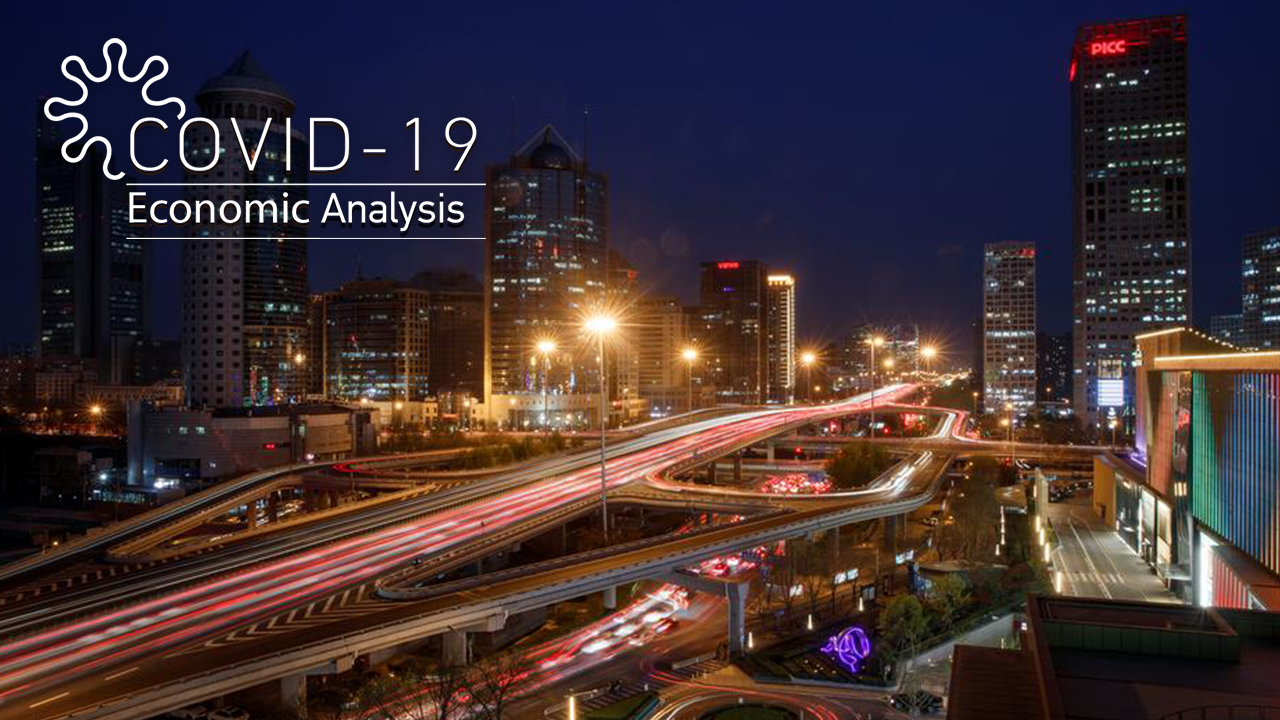 Editor's note: COVID-19: Economic Analysis is a series of articles comprising of experts' views on developing micro and macroeconomic situations around the globe amid the COVID-19 pandemic. This article's author He Weiwen is a senior fellow at Chongyang Institute for Financial Studies and former economic and commercial counselor of Chinese consulates in San Francisco and New York.

China's GDP fell by 6.8 percent year-on-year during the first quarter of 2020, according to the State Statistics Bureau, due to the unprecedented COVID-19 outbreak which hit the nation and its economy badly. It was the first GDP fall since 1976, the last year of the 10 years of turmoil.

It is a sharp contrast with the medium-high growth rate of 6 percent and more China had managed in recent years, one of the highest in the world. 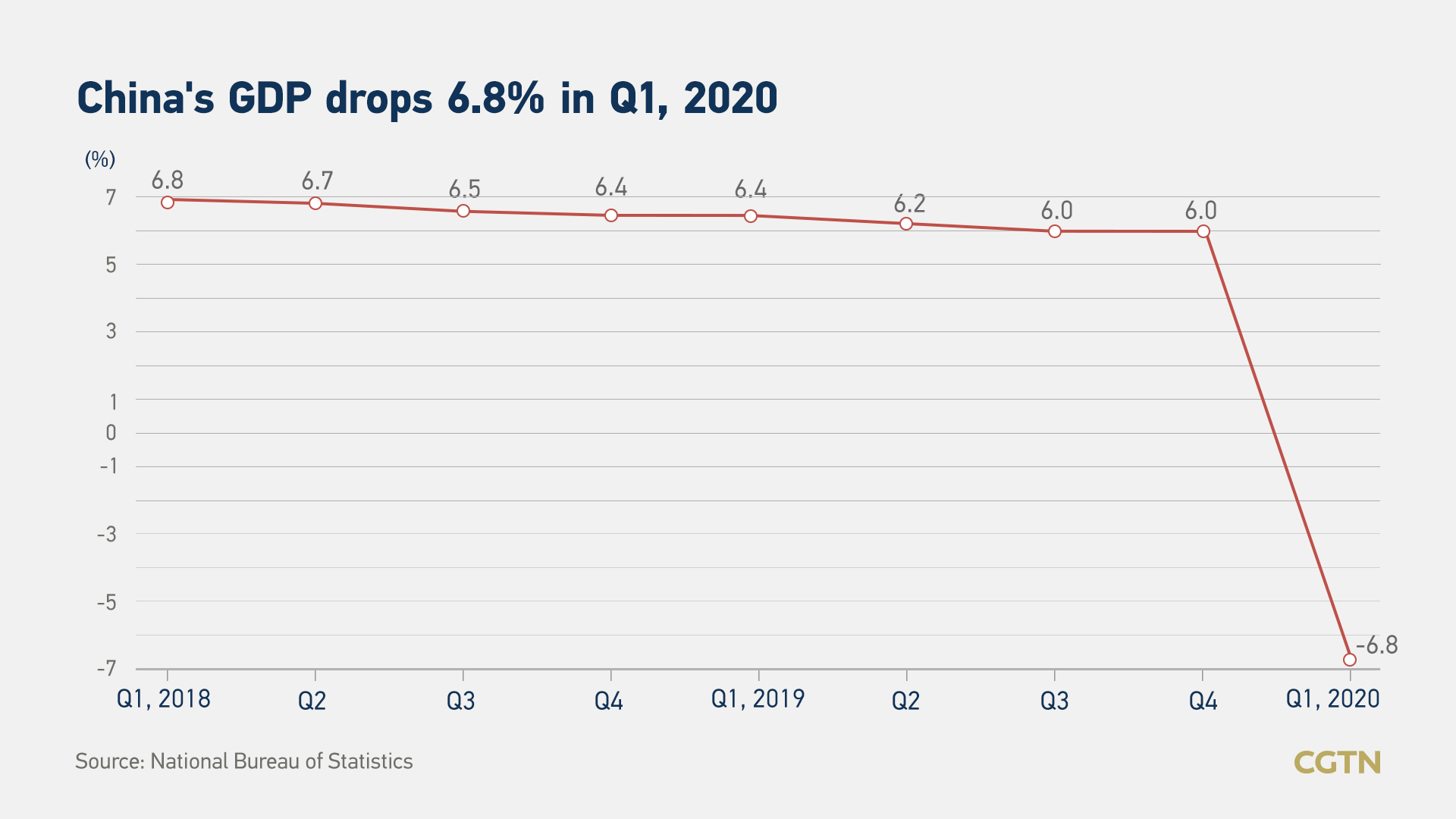 The nationwide quarantine and lockdown in Wuhan caused the widespread closure of restaurants, shops, travel, entertainment, factories and logistics. As a result, exports, consumption and investment – also known as the three horse carriages for growth in China – dragged down the overall economy.

Personal consumption was hit most. Retail sales during the first quarter fell by 19 percent, with catering falling by 44.3 percent and automotive sales by 30.3 percent.

The industrial output added value fell by 8.4 percent. Fixed investment fell by 16.1 percent, with 19.7 percent off in the infrastructure sector, 25.2 percent down in manufacturing and 7.7 percent down in the real estate sector.

Goods import and export value fell by 6.4 percent year-on-year, with a sharp fall in exports (11.4 percent) and slight fall in imports (off 0.7 percent), resulting in a negative contribution to GDP growth.

The economic fall affected the real income of the households. The disposable household income increased a nominal 0.8 percent during Q1 2020, but fell by 3.9 percent in real terms due to a hefty CPI rise of 4.9 percent year-on-year, which eroded the personal real income and thus the purchasing power. 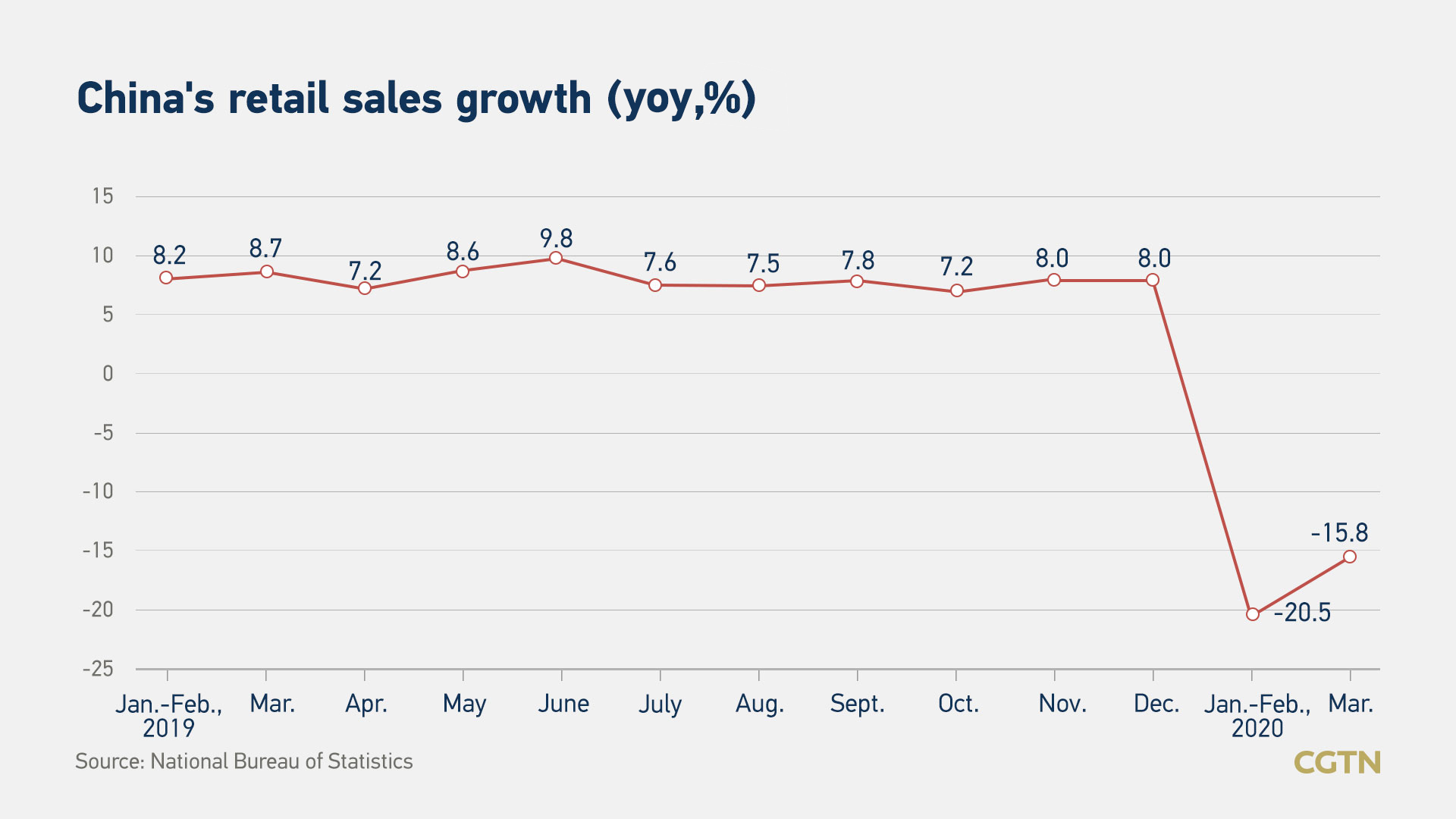 With COVID-19 largely under control in most parts of the country, the economic activities resumed gradually and all the three "driving horses" gained strong momentum in March.

Retail sales in the month were 15.8 percent lower year-on-year, compared to the 20.5 percent fall in January-February. The industrial production was catching up quickly in March, only 1.1 percent lower than a year ago. The high-tech sector even recorded 8.9 percent increase, with 9.9 percent up in information and communications technology.

Fixed investment also saw a solid rebound and narrowed the quarterly fall to 16.1 percent, compared to a fall of 24.5 percent during January-February period.

The foreign trade sector saw an even stronger pick-up, narrowing the year-on-year fall to a mere 0.8 percent in March, while the first two months recorded a fall of 9.5 percent. The industrial export delivery rose by 3.1 percent in March.

March rebound in economy was also supported by a number of fresh drives.

The output of automatic goods and ticket selling machines rose by 35.3 percent, and electronic apparatus up 16.2 percent. In the service sector, information transmission revenue rose by 13.2 percent and that of software and information services rose by 6.0 percent.

Investment of E-commerce increased by 39.6 percent and that of special technology services up 36.7 percent. All those new drives will undoubtedly support the whole economic pick-up.

Q2 critical for moving out of the tunnel

Q2 starts with a continuous picking up in most economic sectors. Given the present momentum, the industrial output added value might match the year ago level in April and register net growth in both May and June.

Infrastructure and real estate investment could reach the year ago level by June, with the robust investment in innovation, high-tech manufacturing and technology services likely to even gain further momentum. Total retail sales in Q2 will also be close to year ago level.

A major concern will be export which is most likely remain in contraction. In balance, Q2 GDP will be close to the same period of 2019. If the trend continues into Q3, there is a very high chance that China's GDP will start net growth over the year ago level during the second half of the year, winding up the full year of 2020 with a growth rate probably higher than the 1.2 percent estimated by the IMF.

In a word, Q2 will be a critical period for China's economy moving out of the tunnel.

Concurrently, Q2 is also the critical period of the full bloom of the severe worldwide economic recession, not seen since the Great Depression in 1930's. The global pandemic has dragged quickly the whole world into economic standstill.

The severe contraction in world economy and trade has cut down the world market demand for Chinese goods and global supply chain for China's imports and production.

An economic upturn in Q3 in world leading economies has been generally expected, if the pandemic in most countries could be brought under effective control by June. If it fails, a quick economic upturn will be out of the question.

In order to mitigate all the external and internal risks, the targeted rescues to Chinese businesses and households are most crucial. Vast numbers of SMEs (small and medium sized enterprises) are in serious difficulties. For instance, total industrial output added value fell by 8.4 percent in Q1. Out of the total, that of the state-owned enterprises fell by 6.0 percent and that of the private sector fell by 11.3 percent. Most of the private businesses are SMEs.

Therefore, continuous active fiscal and monetary measures are badly needed to support the SMEs and save jobs. Effective measures are also much needed to help foreign trade businesses to secure any possible overseas orders and help them to find new orders in domestic market. 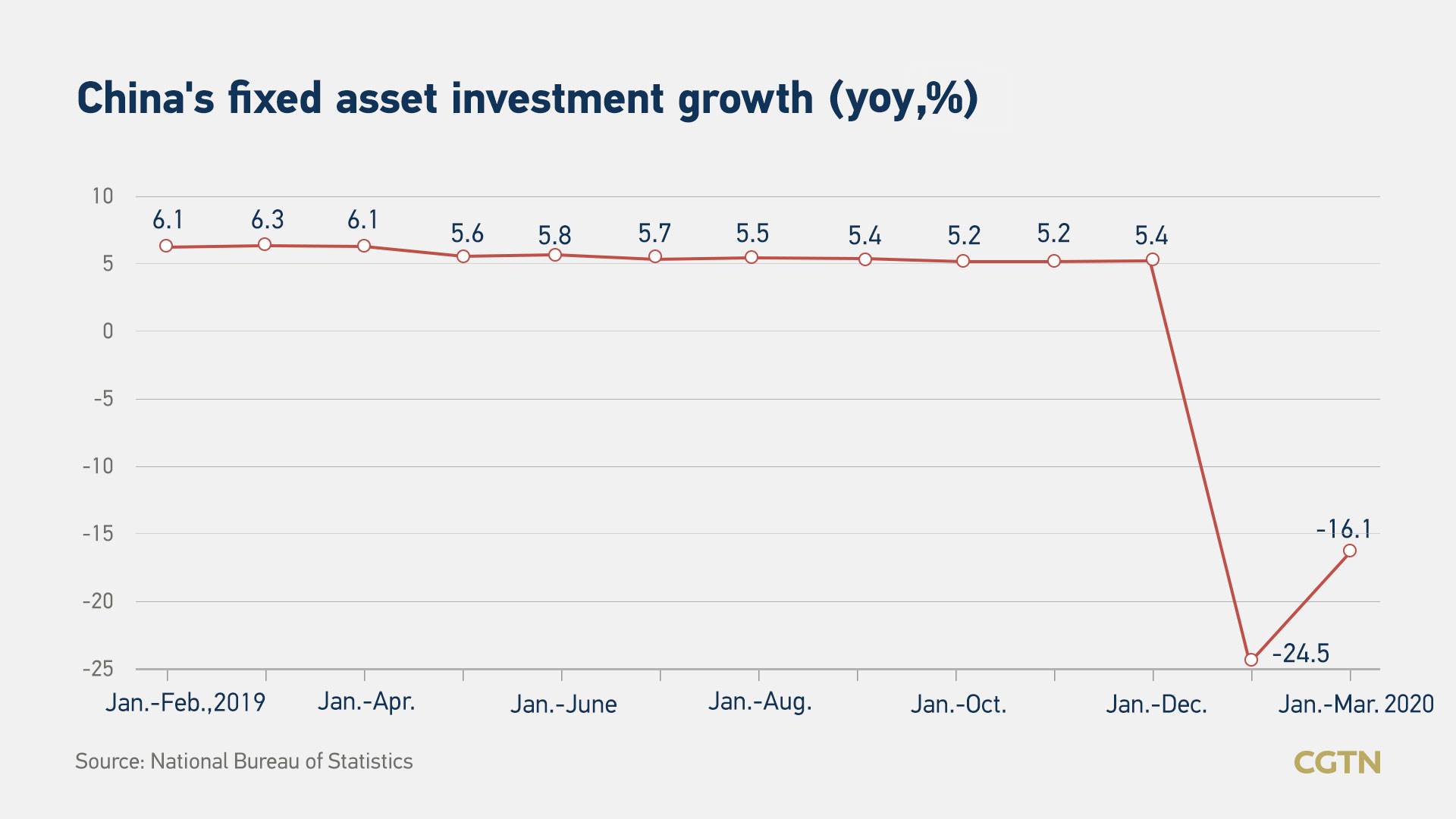 China will be the bright spot in the world recession

The latest IMF estimate put China and India the only few leading economies to register net growth in 2020 amid the most severe world recession since the Great Depression. Chinese GDP is projected to grow by 1.2 percent. As China's GDP accounts for roughly one sixth of the world economy, its 1.2 percent GDP growth will contribute positively 0.2 percentage points to world GDP in 2020.

On the contrary, GDP will fall by 3 percent worldwide, by 5.9 percent in the U.S. and by 7.5 percent in Eurozone. It also estimated China's strong economic rebound in 2021, with a 9.2 percent GDP growth.

In other words, developed economies will recover to their pre-recession level by 2022.

In 2009, in the aftermath of the global financial crisis, the world GDP fell by 0.3 percent, with the U.S. and EU falling by 4 to 5 percent. China, on the contrary, registered a growth rate of 9.2 percent and became the bright spot in the worldwide recession. This time, China will again serve as a bright spot in the world's economic darkness.