In The Spotlight: WHO chief Tedros, a champion of multilateralism
By Justina Crabtree 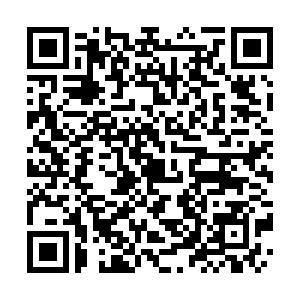 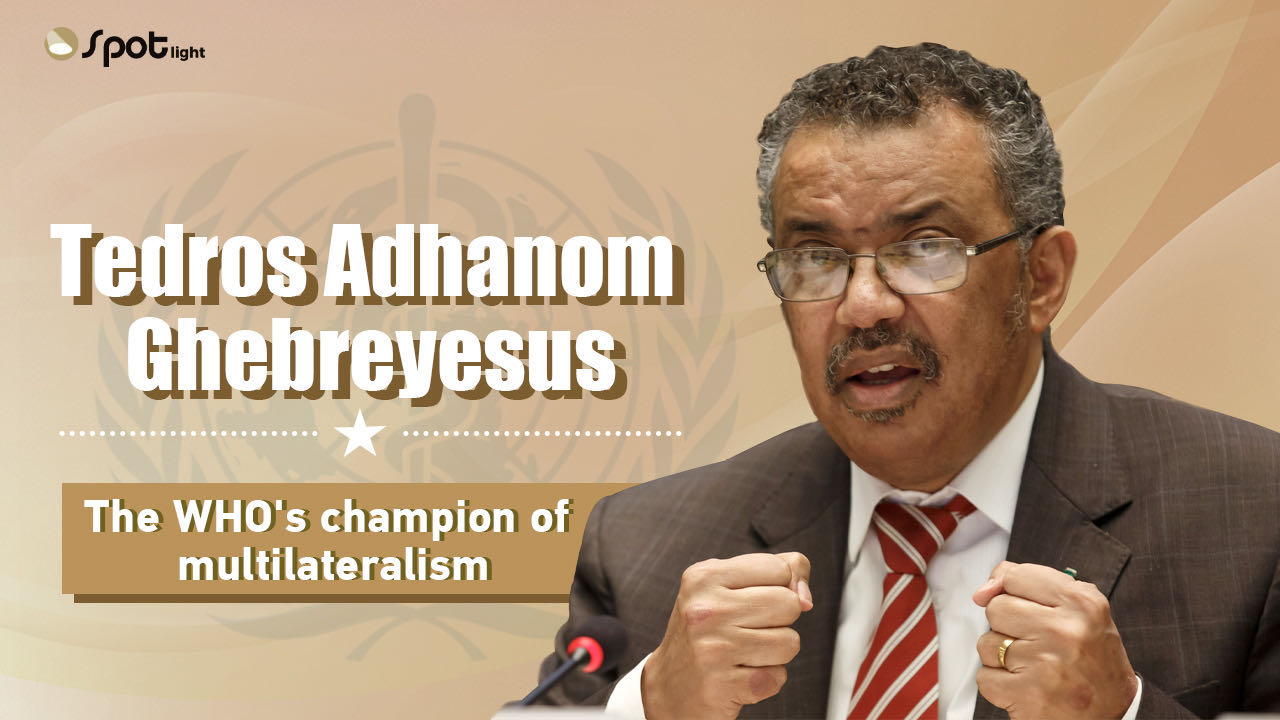 "Test, test, test," rang out a now-familiar voice in mid-March, a mantra often repeated in news coverage since, articulating a fundamental strategy of the World Health Organization (WHO) in fighting the new type of coronavirus. As the pandemic has spread, it has been punctuated by announcements from WHO Director-General Tedros Adhanom Ghebreyesus.

The 55-year-old Ethiopian is currently ubiquitous, leading the world's major multilateral public health body as it combats the virus that has caused human tragedy and has a stranglehold on normality in countries across the globe.

Tedros was elected as head of the WHO for a five-year term in May 2017. He is the first African in charge of the 72-year-old Geneva-based institution.

So far, Tedros' tenure at the helm of the WHO has coincided with two severe virus outbreaks: Ebola in the Democratic Republic of Congo and now, the novel coronavirus.

Born in Asmara, Eritrea, before its independence from Ethiopia, he rose up the ranks of health governance in the latter country, serving as its minister of health from 2005-2012 before moving on to become foreign minister until 2016. Deaths in Ethiopia from AIDS, malaria, and tuberculosis, as well as fatalities among young children and women in childbirth, dropped by more than a half under his leadership of the health ministry. 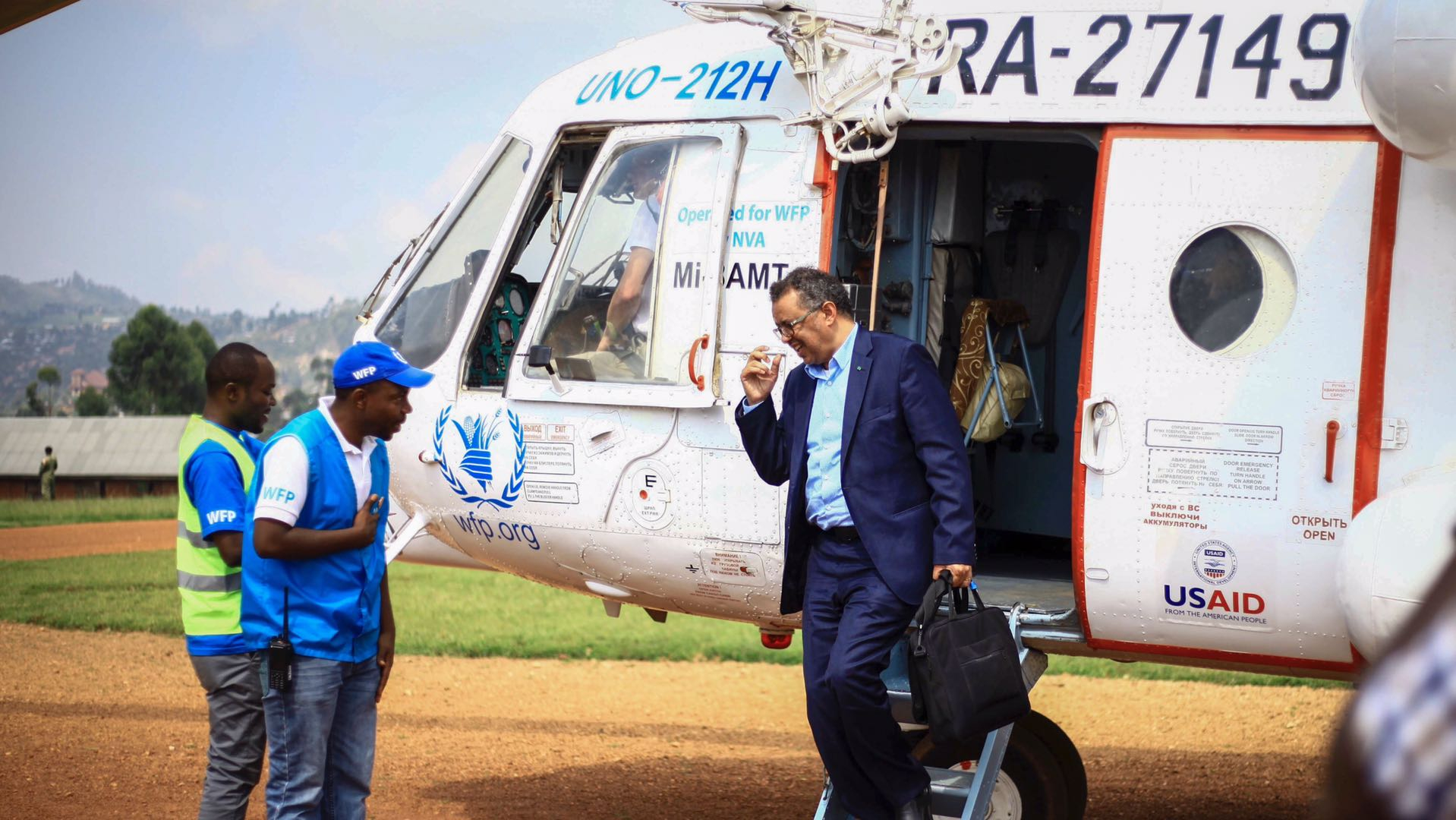 Tedros arrives by helicopter at Ruhenda airport in Butembo to visit operations aimed at preventing the spread of Ebola and treating its victims in the east of the Democratic Republic of Congo, June 15, 2019. /AP

Tedros arrives by helicopter at Ruhenda airport in Butembo to visit operations aimed at preventing the spread of Ebola and treating its victims in the east of the Democratic Republic of Congo, June 15, 2019. /AP

Personal tragedy initially pushed Tedros to work in the healthcare sector. As a child he lost his younger brother, who was aged about four at the time, to what he now presumes was measles, a preventable disease. "I didn't accept it; I don't accept it even now," he told Time Magazine in 2017.

Tedros later went on to study biology in Eritrea and complete postgraduate work in the UK, including a Master's degree at the London School of Hygiene and Tropical Medicine on a WHO scholarship.

After taking office at the WHO in July 2017, Tedros specified five priorities for the body: Universal health coverage; health emergencies; women's, children's and adolescents' health; health impacts of climate and environmental change; and a transformed WHO.

He has been described as a quiet man open about his emotions and humanity: Tedros has cried in public several times and made an effort to oversee the WHO's work on the ground.

China first informed the WHO of a mysterious new disease on December 31. Just under one month later, Tedros met Chinese President Xi Jinping in the capital Beijing. Their discussion led to agreements: To continue collaborating to contain the virus in Wuhan, the epicenter in China, to carry on sharing data, and to allow for a mission of WHO experts to visit China. They did so in mid-February. 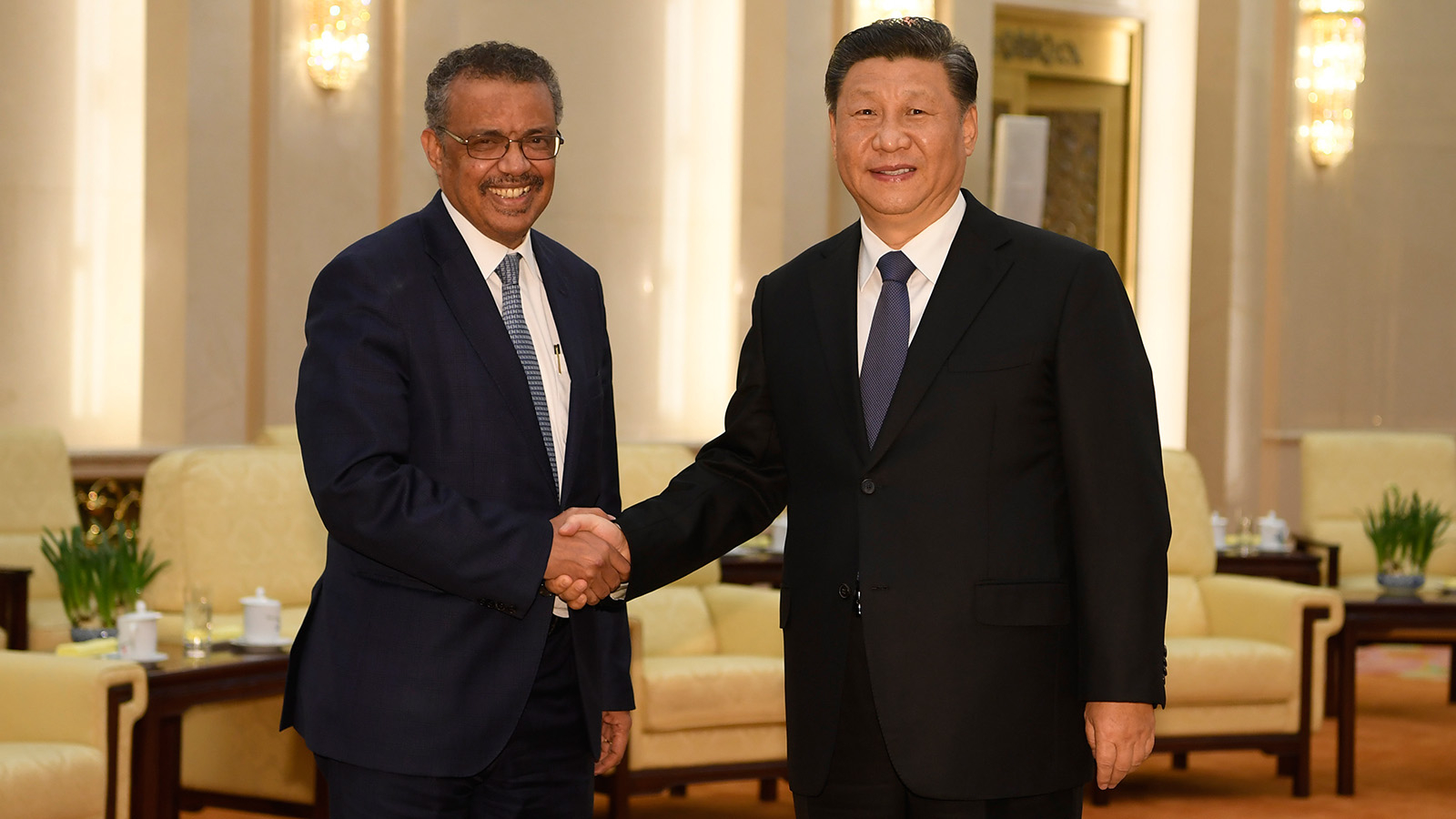 Tedros Adhanom Ghebreyesus, director-general of the World Health Organization (L), shakes hands with Chinese President Xi Jinping before a meeting at the Great Hall of the People in Beijing, January 28, 2020. /AP

Tedros Adhanom Ghebreyesus, director-general of the World Health Organization (L), shakes hands with Chinese President Xi Jinping before a meeting at the Great Hall of the People in Beijing, January 28, 2020. /AP

Tedros spoke positively of China's response to the coronavirus outbreak at the meeting.

"We appreciate the seriousness with which China is taking this outbreak, especially the commitment from top leadership, and the transparency they have demonstrated, including sharing data and genetic sequence of the virus," the WHO website quotes him as saying.

According to the Chinese Foreign Ministry's website, Xi said that "The WHO is welcome to participate in the epidemic containment."

In fact, Tedros has repeatedly praised Chinese action in the face of the pandemic, saying in an address on January 30 that the country "is to be congratulated for the extraordinary measures it has taken to contain the outbreak, despite the severe social and economic impact those measures are having on the Chinese people." In another instance mid-February, he commented that China "bought the world time."

The WHO director-general now gives daily press briefings on coronavirus from the institution's headquarters in Geneva, Switzerland, and in early February unveiled an appeal for 675 million U.S. dollars in funding to tackle the outbreak.

He advocates a targeted approach in fighting the virus, saying that it warrants a "focus on the epicenter," whereas "if you have several epicenters, it is chaos."

As the battle against the pandemic rumbles on, Tedros has recently been caught in the crosshairs. 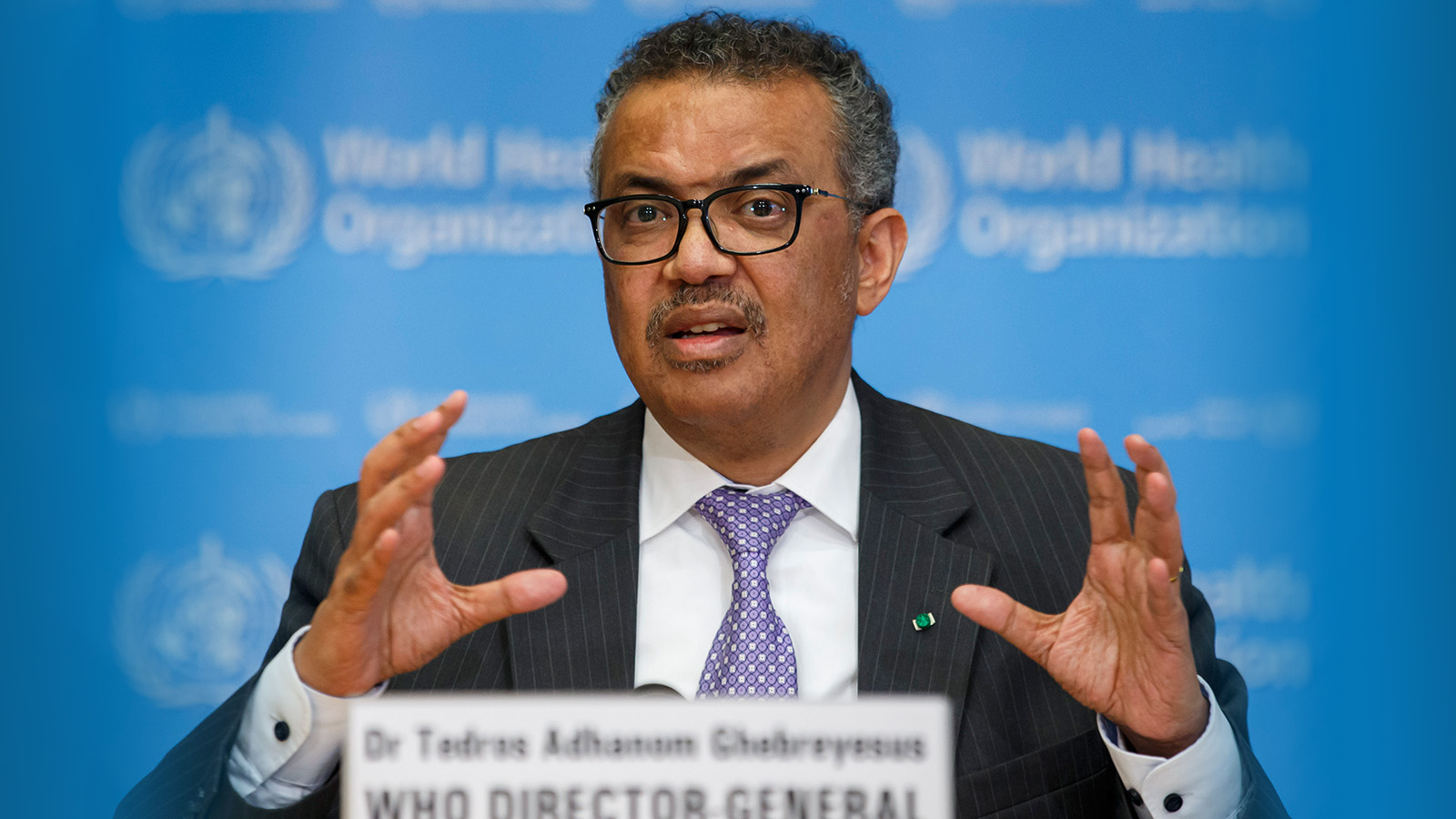 Tedros speaks during a news conference at the WHO headquarters in Geneva on updates regarding the novel coronavirus outbreak, Switzerland, March 9, 2020. /AP

Tedros speaks during a news conference at the WHO headquarters in Geneva on updates regarding the novel coronavirus outbreak, Switzerland, March 9, 2020. /AP

On Tuesday, U.S. President Donald Trump said he would halt Washington's funding of the WHO, which in 2019 was over 400 million U.S. dollars.

At a press conference, Trump accused the organization of "severely mismanaging" its response to the virus and voiced "deep concerns whether America's generosity has been put to the best use possible." Several Republican lawmakers have supported Trump's move.

Trump's dissatisfaction is linked to his perception that the WHO has been too lenient with China, though the president has praised the Chinese response.

Trump's decision could be painful for the WHO; Washington's contribution last year accounted for around 15 percent of the institution's budget. But, at a news briefing on Wednesday, Tedros said that the organization "will work with partners to fill any gaps and ensure our work continues uninterrupted."

On April 8, Tedros said at a presser in Geneva that he had been the target of racist remarks originating in Taiwan. "I don't care who says what about me. I would prefer to focus on saving lives; no time to waste," he said in response to personal attacks.

Throughout the coronavirus crisis, Tedros has promoted collaboration and multilateralism at a time when nationalism has been on the rise, saying: "We shouldn't waste time pointing fingers. We need time to unite."