Abortion rights in time of COVID-19
By Sim Sim Wissgott 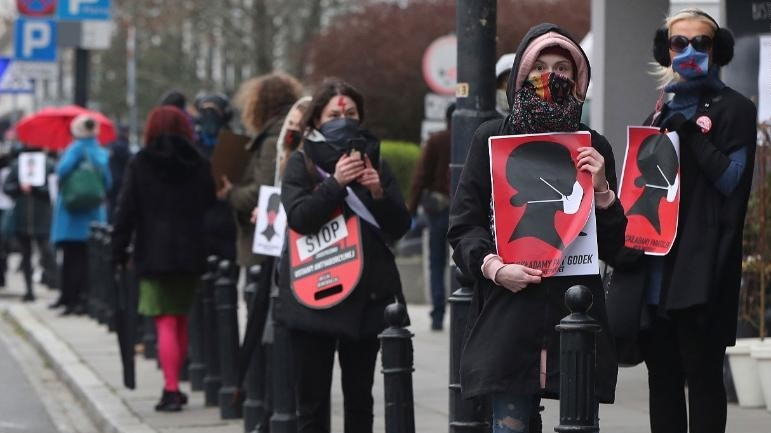 Women's rights activists protest against a bill that would further restrict Poland's law on abortion in Warsaw, Poland, on April 15, 2020. /AP

Women's rights activists protest against a bill that would further restrict Poland's law on abortion in Warsaw, Poland, on April 15, 2020. /AP

Worldwide, health experts have warned that vital contraception and sexual and reproductive health services could be hindered by the COVID-19 pandemic. But in some countries, politicians and anti-abortion activists are taking things even further.

News last week that Poland's parliament was going to debate a proposal to further restrict what is already one of the narrowest laws on abortion in Europe prompted outrage.

Abortion is currently banned in the staunchly Catholic country except in cases of rape or incest, where the health of the mother is at risk and where prenatal tests show signs of severe fetal anomalies. But the new bill would have removed the last exception – which accounts for 96 percent of abortions in Poland, according to UN experts – effectively outlawing the procedure altogether.

In the U.S., several states have been battling it out with the courts over whether abortions should be deemed an essential procedure and go ahead during a global health emergency. 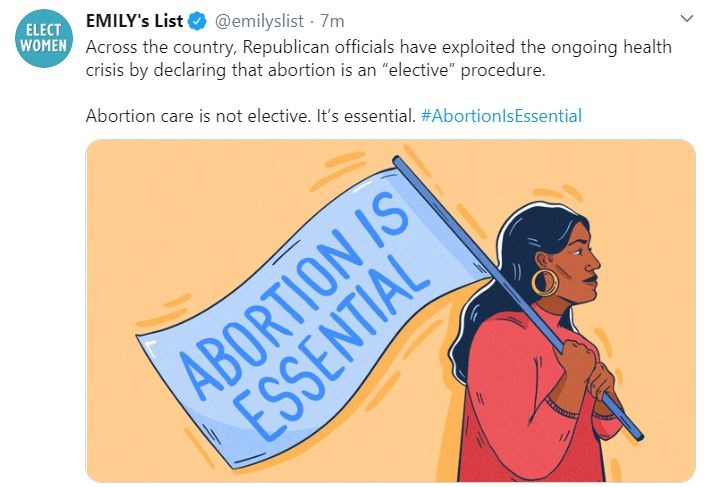 A bill from Westminster last year decriminalized the procedure, but new services failed to materialize on April 1 as planned, with advocates arguing the regional government was dragging its feet on purpose, even as travel restrictions due to COVID-19 meant the alternative of travelling to England to get an abortion was hardly feasible.

Socially conservative politicians in Belfast also voted against a proposal introduced in the rest of the UK in the wake of the pandemic, allowing doctors to prescribe abortion pills after a phone consultation, known as telemedicine abortion.

Some states used this reasoning to temporarily limit access to abortions.

"Postponing surgeries and procedures that are not immediately medically necessary will ensure that hospital beds are available for those suffering from COVID-19 and that PPEs are available for health care professional," said Texas Attorney General Ken Paxton.

Abortion rights groups have rubbished this claim, pointing out that a continued pregnancy requires more medical checks and PPE than an abortion, and that a lack of PPE did not explain the decision to halt medication abortions, which involve taking two pills orally.

Those states and countries now taking measures have a history of trying to ban abortion and critics have accused politicians of using a global crisis to get bills passed under the radar or delay those they do not approve of, such as in Poland and Northern Ireland. 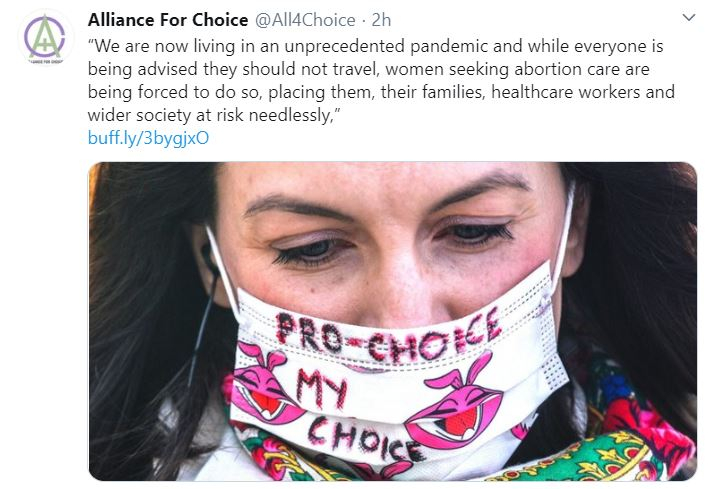 Public attention is currently elsewhere and stay-at-home orders in many countries mean there are few avenues for protest.

"The Polish Parliament is taking advantage of the lockdown to try once again to pass its 'Stop Abortion' bill," the International Campaign for Women's Right to Safe Abortion blasted on Twitter.

"They chose a moment when the free movement of persons and freedom of assembly are gravely limited on public health grounds, so that protests against the bills cannot happen on the streets," it noted.

In Northern Ireland, observers noted the failure to introduce abortion services had little to do with the epidemic.

"We know that health professionals are ready to offer abortion services," Fiona Bloomer, an abortion policy researcher at Ulster University, told The New York Times. "The only conclusion we can draw is that this is a political decision, to stall implementation of the regulations."

The restrictions have led prominent rights figures to speak up.

The Council of Europe's Commissioner for Human Rights Dunja Mijatovic expressed "dismay" at Poland's decision to debate the abortion bill and urged the government to legalize the procedure instead of further criminalizing it.

"In this extraordinary time of the COVID-19 pandemic, politicians and decision-makers must resist the temptation to push through measures that are incompatible with human rights," she said in a statement. 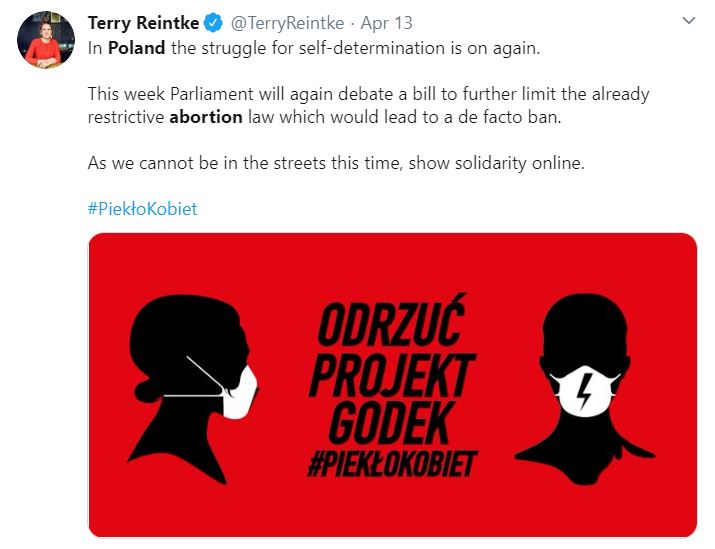 European MPs wrote to the Polish government expressing "deep concern" about the proposal and warned that its adoption "would violate Poland's international human rights obligations."

Meanwhile, protesters found ways around social distancing measures by taking their grievances to social media and turning up in their cars or on their bikes with flags and posters to demonstrate in central Warsaw.

In the U.S., the American College of Obstetricians and Gynecologists made clear in a statement that it did "not support COVID-19 responses that cancel or delay abortion procedures."

"Abortion is an essential component of comprehensive health care. It is also a time-sensitive service for which a delay of several weeks, or in some cases days, may increase the risks or potentially make it completely inaccessible," it said.

Most of the states that have labelled abortions as "non-essential" only allow the procedure up to the 20th week of pregnancy.

See you in court

The strong reaction has had some success.

Poland's parliament sent its abortion bill back to committee after debating it, although it did not reject it entirely. 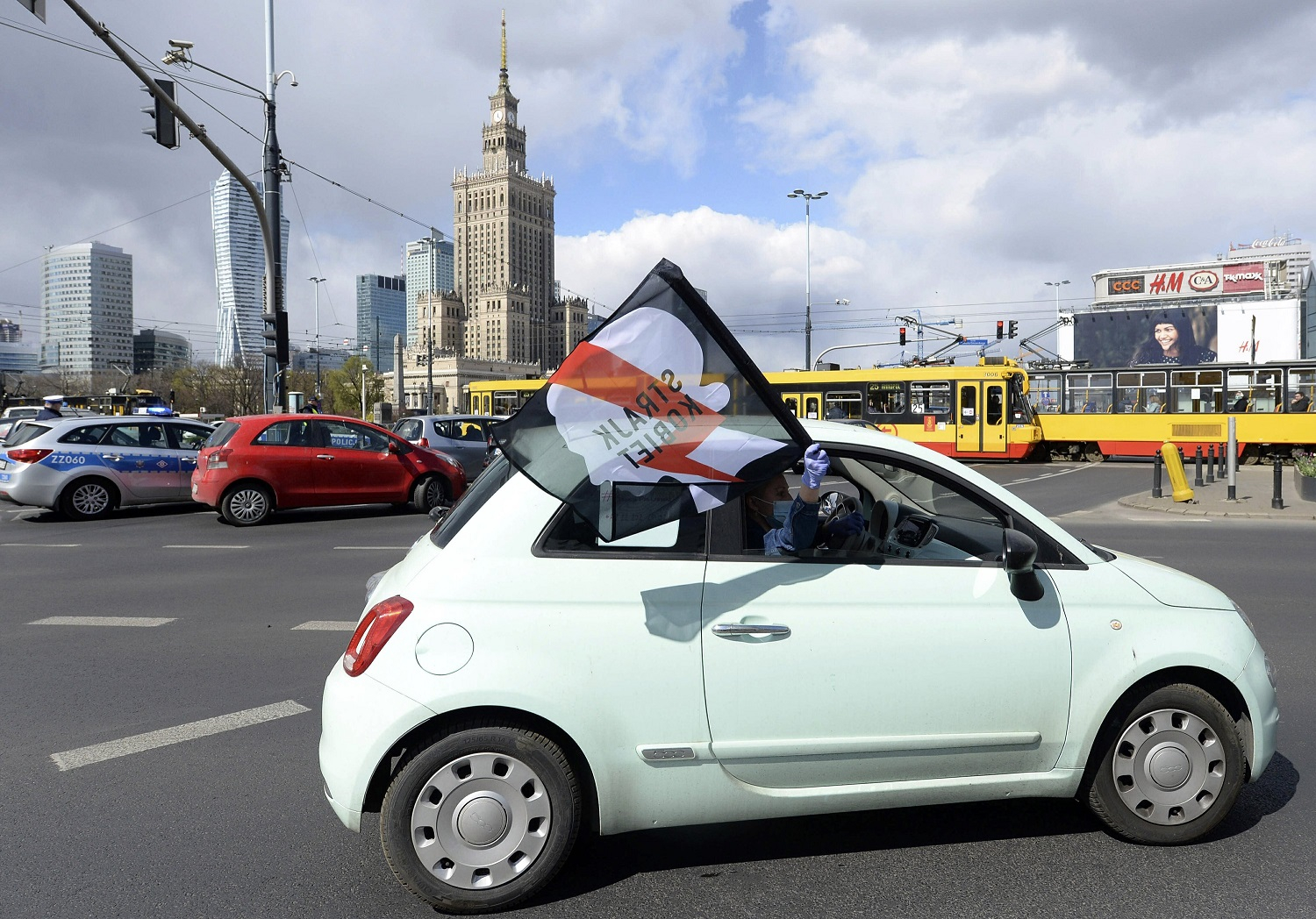 Women protest safely in their car against a bill that would further restrict Poland's law on abortions in Warsaw, Poland, April 14, 2020. /AP

Women protest safely in their car against a bill that would further restrict Poland's law on abortions in Warsaw, Poland, April 14, 2020. /AP

In Northern Ireland, health authorities announced on April 9 that abortion services would become available, following public pressure and threats of legal action by women's rights groups. The issue of telemedicine abortions however is still being discussed.

In the U.S., rights groups like Planned Parenthood, the Center for Reproductive Rights, and the American Civil Liberties Union (ACLU) have taken the matter to court and seen some results, with courts in Ohio, Oklahoma, Alabama, Arkansas and Tennessee at least partially blocking state rulings limiting access to abortion.

In Texas however, a federal court of appeals on Monday overturned a lower court's ruling allowing abortion by medication, only permitting the procedure where the deadline for terminating a pregnancy is close.

Undaunted, rights groups have said they will keep fighting.

"These emergency abortion bans are an abuse of power and part of an ongoing effort to use sham justifications to shut down clinics," said Nancy Northup, president and CEO of the Center for Reproductive Rights. "We will use every legal means to ensure that abortion care remains available during this critical time."