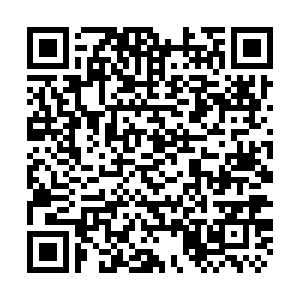 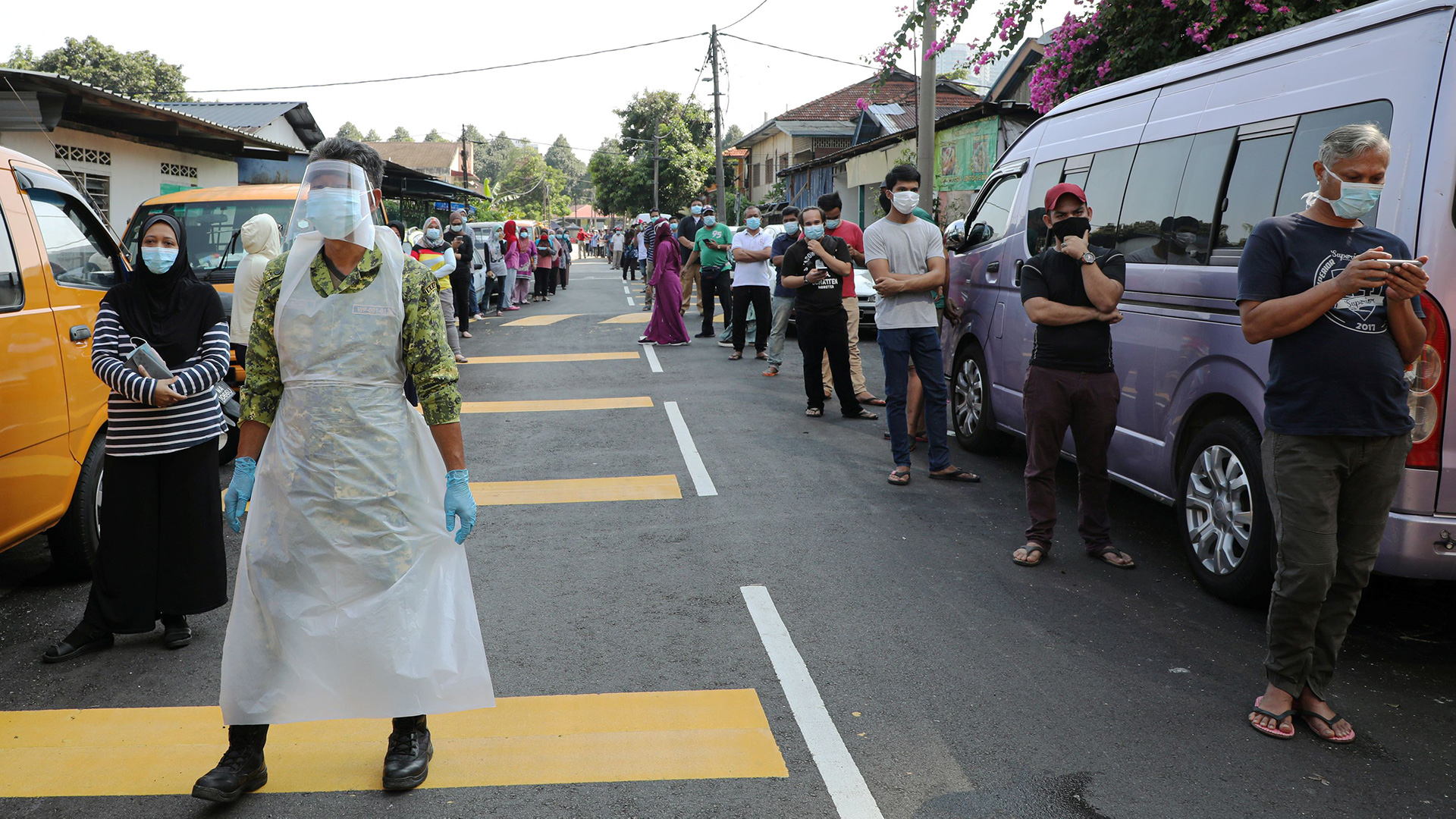 A migrant worker stands on his apartment balcony brushing his teeth with his finger, then spits off the side of his building onto the street below.

Fortunately, with this entire neighborhood in Kuala Lumpur under total lockdown, no one was passing by.

Such poor sense of hygiene is all too common in the building somewhat incongruously called Selangor Mansion, a now run-down eight-story block built in the early 1960s in the historic district of Masjid India or India mosque. 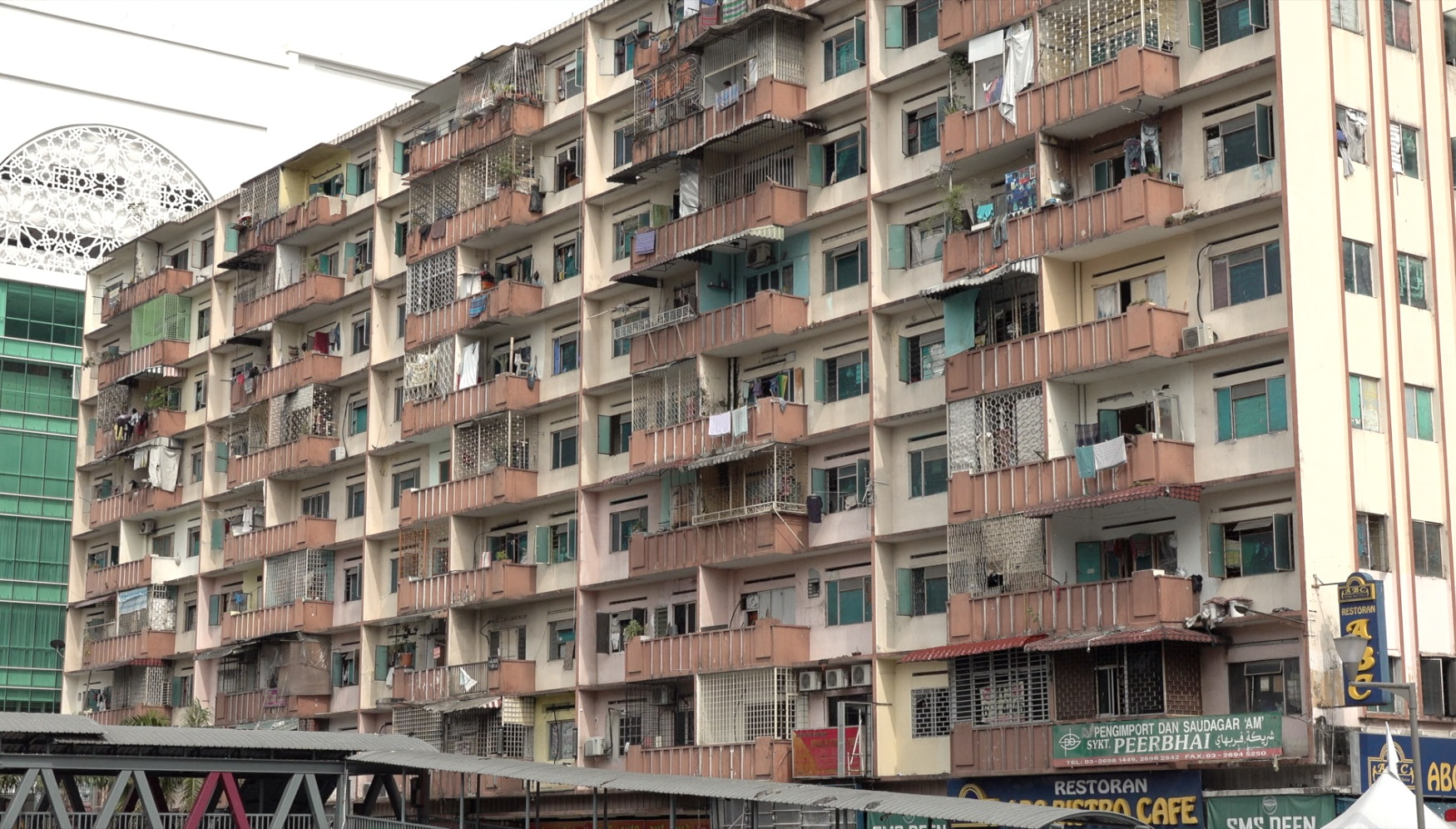 There have been more than 80 cases of the virus in Selangor Mansion. Rian Maelzer/CGTN

There have been more than 80 cases of the virus in Selangor Mansion. Rian Maelzer/CGTN

The district was where early Indian Muslim immigrants to Malaysia settled. Today, the vast majority of residents are foreign migrant workers from South Asia and Indonesia.

Basheerutheen Mohamad Abu Bakar is one of the few Malaysians still living in Selangor Mansion, where more than 80 cases of COVID-19 have been detected.

"In some units, we have about 10, 12 even 15 staying inside, foreign workers. It's overcrowded, overcrowded," he says, the apartments in effect used as makeshift dormitories. People living there often throw rubbish in the common areas or even off their balconies. The red stains of betel nut spittle stain the hallway walls. 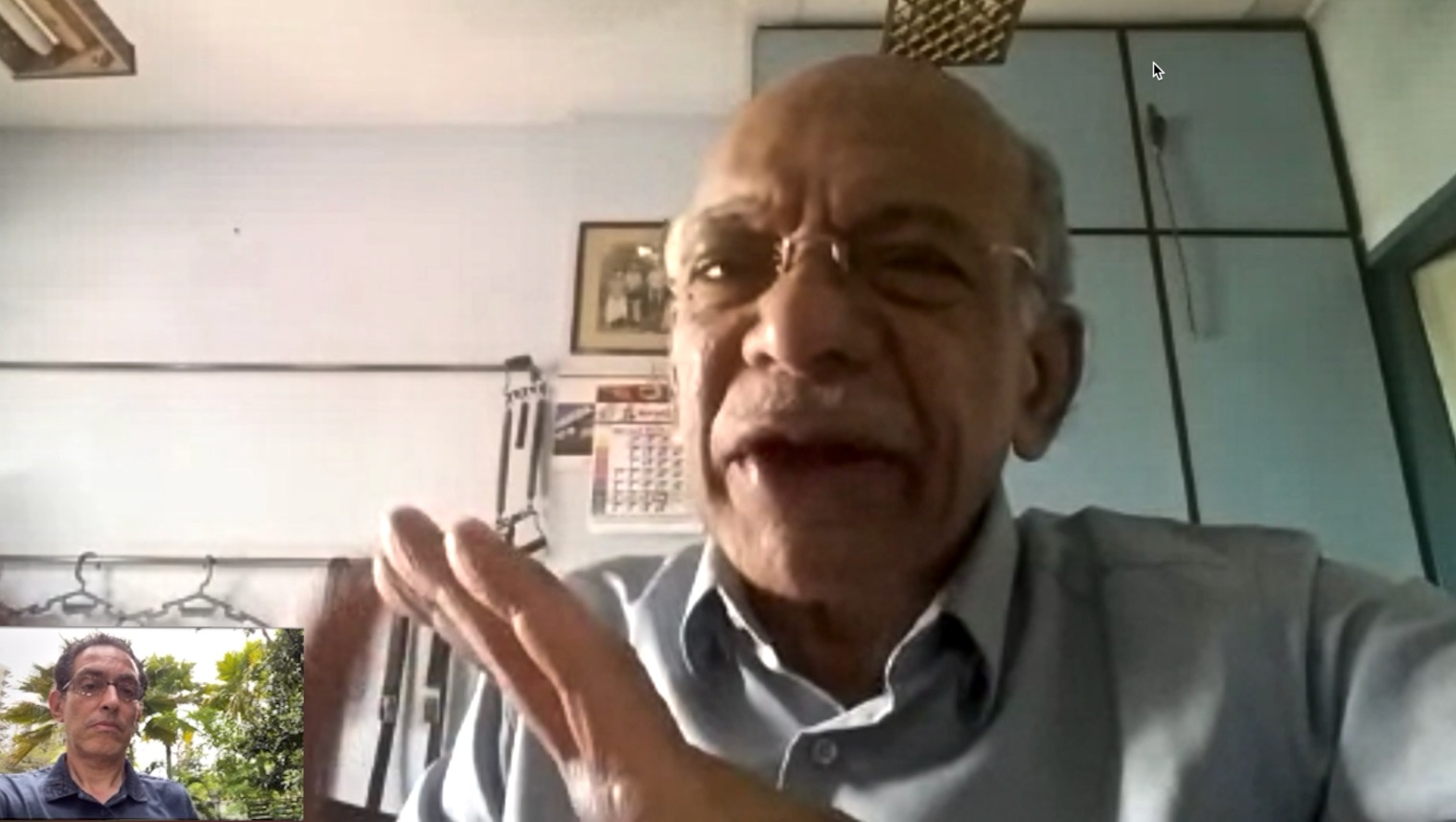 Basheer says as many as 15 foreign workers live crammed into a single unit. Rian Maelzer/CGTN

Basheer says as many as 15 foreign workers live crammed into a single unit. Rian Maelzer/CGTN

More than a tenth of confirmed COVID-19 cases in Malaysia have been among foreigners, almost all migrant workers or refugees. When the health ministry noted a cluster of some 17 cases in Basheer's building, they placed it under complete quarantine. Residents have only been allowed out for coronavirus testing, with food handouts being delivered to the front of the building. The testing revealed several dozen more confirmed cases, and the authorities moved to seal off the whole Masjid India area.

Basheer said he was unaware of the virus spreading in his building and neighborhood. "It was only after when we were put under lockdown they went to every unit and told us to come for testing." Those who tested positive were swiftly taken to hospital for isolation and treatment.

"I was a bit nervous, a bit anxious when we were called to go for testing." On the other hand, "we were saying it is good for us to have it tested and after testing, ok, we were not called so we just assumed that we were safe."

Without the total lockdown, the virus would surely have spread even more widely through the crowded building and area.

"In a way, we were feeling a bit safe, secure because something is going on to protect us," Basheer says. "It gives us some confidence." 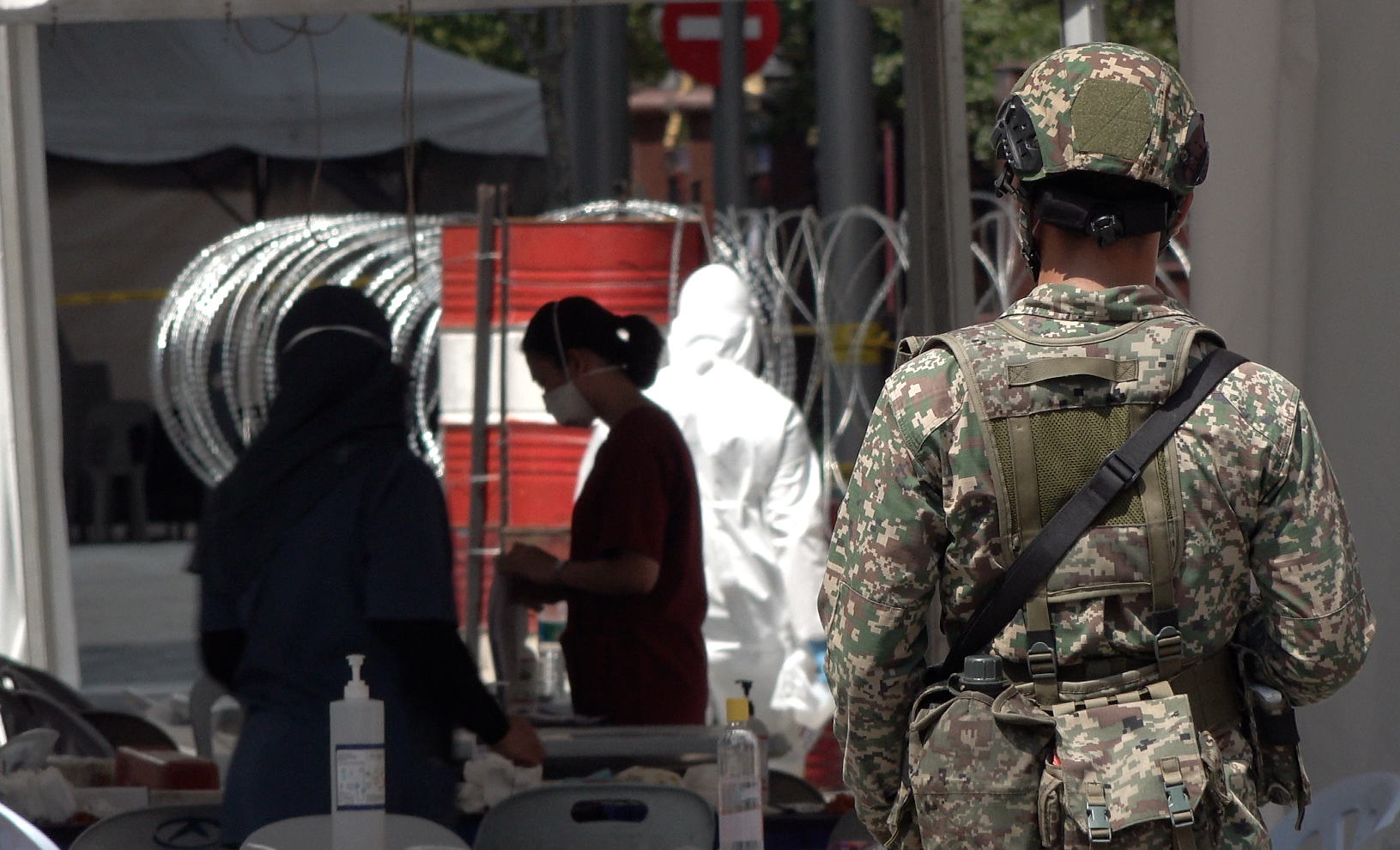 Basheer says the testing and security is giving him some comfort. Rian Maelzer/CGTN

Basheer says the testing and security is giving him some comfort. Rian Maelzer/CGTN

Malaysians, as a whole, express a lot of confidence in the man leading the country's fight against the coronavirus, the director-general of the Ministry of Health, Dr. Noor Hashim Abdullah. With new cases now down to double digits each day, and being outstripped by the number of people being discharged, people in other countries are noting Malaysia's work too.

A piece on CGTN's website recently hailed Malaysia's Noor Hisham as one three "stars" of the global battle against COVID-19. Local media – print, online and TV – all jumped on the story, agreeing with CGTN's assessment of Noor Hisham's calm, reassuring but honest approach.

When reporters asked about the article at his daily press briefing, Dr. Noor Hisham characteristically deflected the praise to the others in his ministry, the front-liners, and the government as a whole.

While the numbers look increasingly positive, the curve seemingly well and truly flattened, Noor Hisham continues to advise extreme caution about lifting movement restrictions, or thinking the battle is won.

The possible spread among foreign migrant workers – many of whom are undocumented and fearful of the authorities – remains a serious cause for concern, especially with what is happening next door in Singapore.

In the past couple of weeks, the virus has spread rapidly through crowded foreign workers' dormitories in the island state, leading to a surge in new cases. Singapore now has more positive cases than Malaysia, which has more than five times its population.

To ensure authorities are not missing the silent spread among migrants, authorities have now sealed off the capital city's biggest wholesale fresh produce market – which has a large presence of migrant workers – as well as the surrounding area that's home to around 15,000 residents, and begun mass testing there.

Back in Masjid India, in the historical heart of Kuala Lumpur, the barbed wire barricades and army patrols will remain in place until at least April 28. 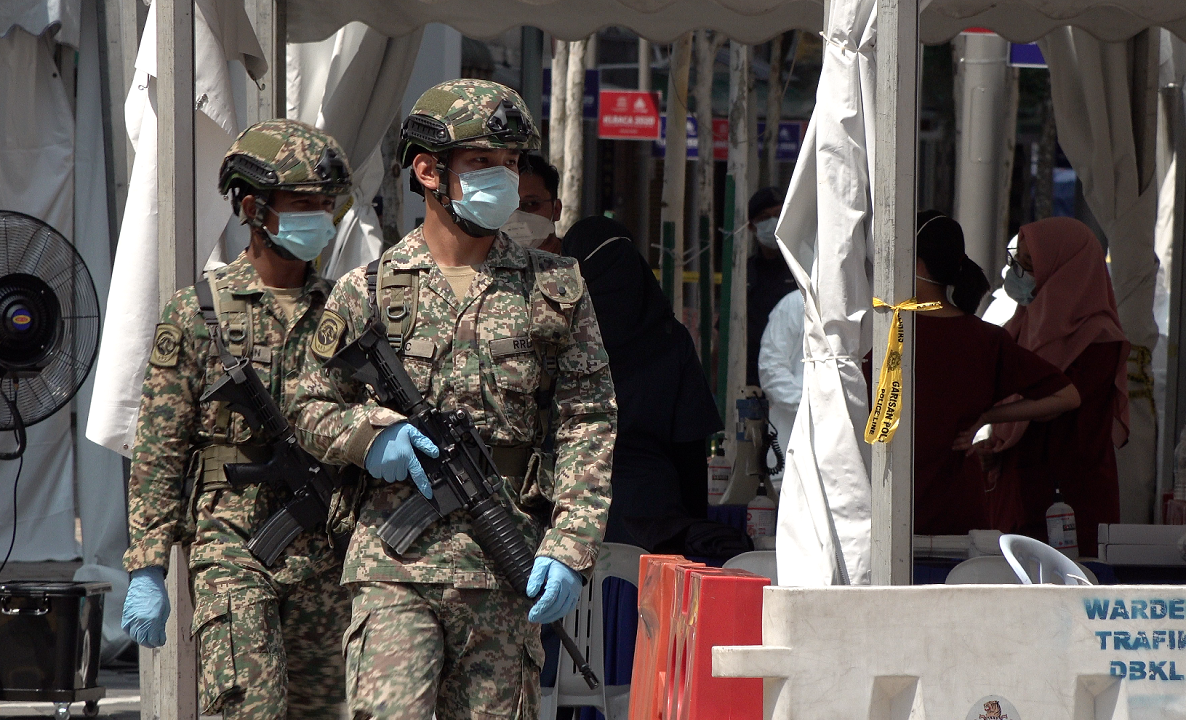 A strong army presence to seal off the neighborhood. Rian Maelzer/CGTN

A strong army presence to seal off the neighborhood. Rian Maelzer/CGTN

This is the site of Kuala Lumpur's original "high street" dating back more than a century — home to Indian Muslim and Malay merchants making and selling traditional clothing, fabric shops, street bazaars and food stores that would normally be jammed with people now, days before Ramadan begins.

"It is just so quiet," says Basheer, peering off his balcony at the deserted streets and barricades below. "I feel totally out of place."