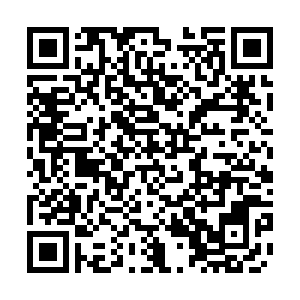 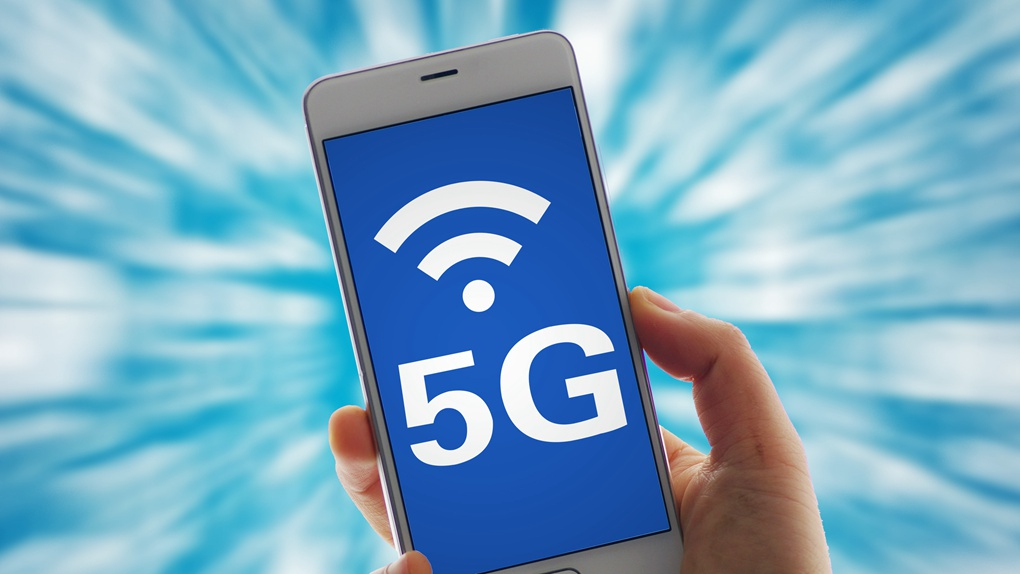 Chinese brands accounted for about 61 percent of global 5G smartphone shipments in the first quarter this year, with Huawei's market share approaching Samsung, according to Strategy Analytics on Tuesday.

The latest research from Strategy Analytics showed that despite the world economy being ravaged by the spreading epidemic, demand for 5G smartphones was still strong, as global 5G smartphone shipments in Q1 surged to 24.1 million units, significantly surpassing the total production of 18.7 million in 2019.

In 2019, three tech giants from China and two from South Korea occupied most of the market share of 5G smartphone shipments worldwide. Among them, China's Huawei, the world's second-largest smartphone maker by volume, shipped 6.9 million 5G smartphones, enjoying the largest market share at 36.9 percent, closely followed by 35.8 percent of South Korea's tech behemoth, Samsung, based on Strategy Analytics. 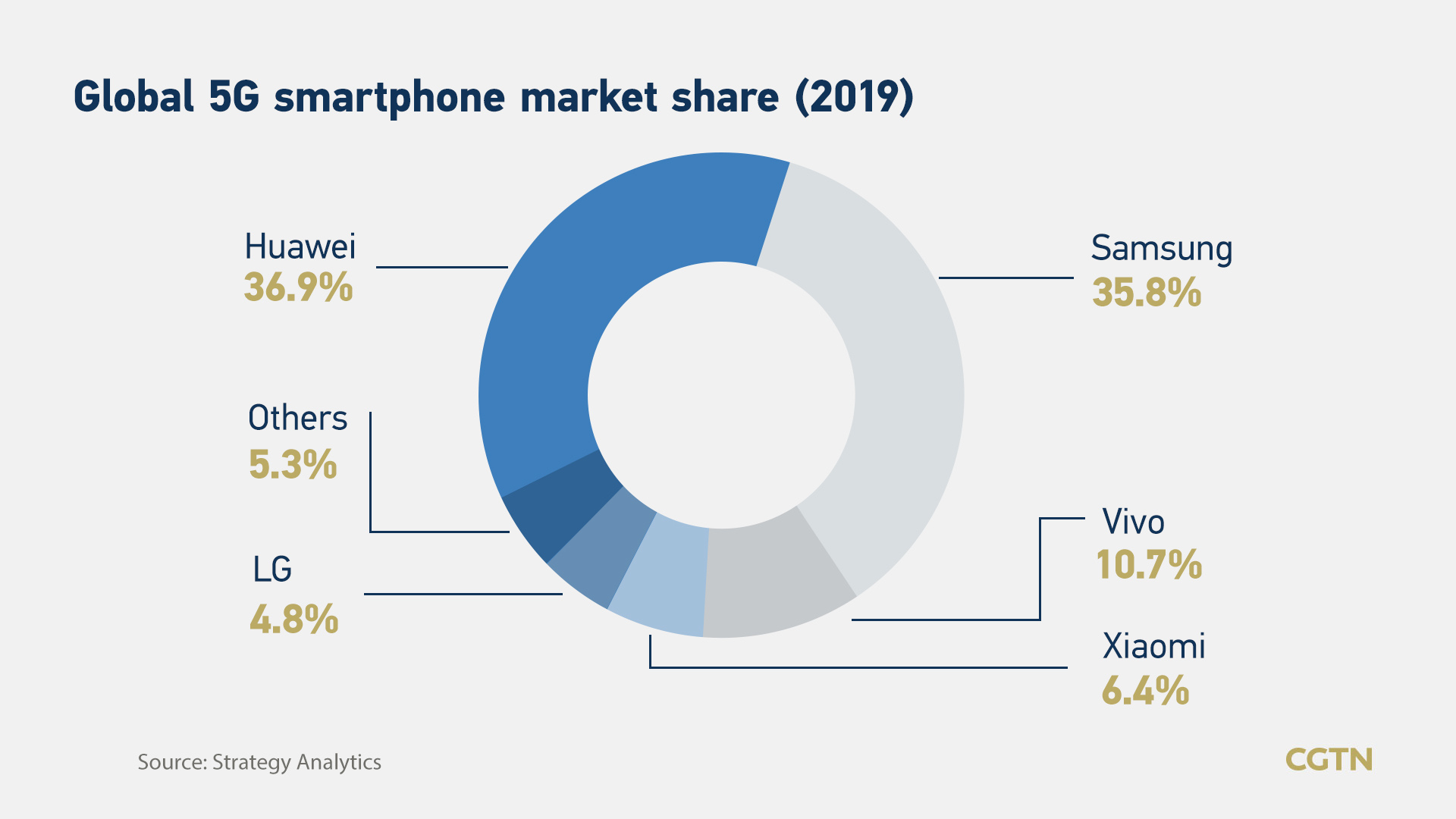 This year, Samsung surpassed Huawei to occupy the largest market share of 5G smartphones shipment worldwide in Q1 with a total of 8.3 million units, while the latter's share is only 1.2 percent less than Samsung, at 33.2 percent.

According to the Wall Street Journal report citing people familiar with the matter on Monday, Apple, another tech giant, is forging ahead with plans to release four new iPhone models later this year, some of which will be enabled with 5G connectivity. 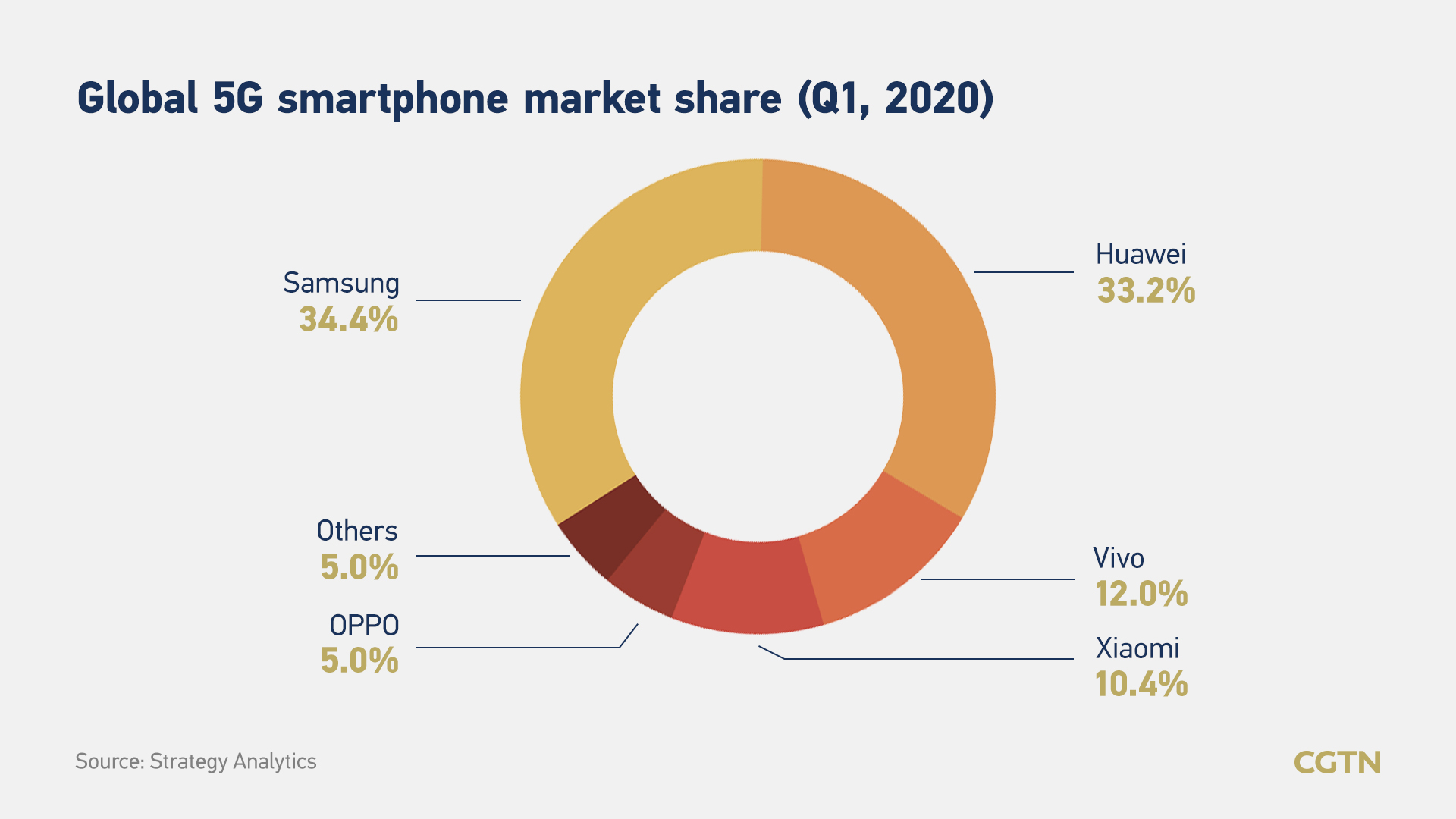 Woody Oh, director at Strategy Analytics said on its official website that "nearly all of Huawei's 5G smartphones were shipped in China, where it is the smartphone market leader. The top 5G smartphone from Huawei is the Mate 30, Honor V30 Pro and Mate 30 Pro."

China is pushing to upgrade its telecommunication services, and almost 200,000 5G base stations have been built nationwide with more than 50 million users.

By the end of this year, another 500,000 base stations are expected to be built, with signal service covering cities, towns and villages, according to the country's Ministry of Industry and Information Technology.

Global smartphone sales declined 14 percent year on year in February, based on data from market researcher Counterpoint Research and the business of both smartphone giants, Huawei and Samsung, in Q1 were negatively impacted by the coronavirus pandemic.

Last month, Huawei reported its sales revenue rose by about one percent to 182.2 billion yuan (about 25.7 billion U.S. dollars) for the first quarter year on year, with its net profit margin over the period narrowing to 7.3 percent from about eight percent a year ago.

The company said that it, together with its supplier network, are working together to address the tough challenges facing production and resume operations.

While net profits of Samsung in the same period were 4.88 trillion won (4 billion U.S. dollars), down 3.1 percent from a year ago, who had operations suspended at 11 overseas assembly lines earlier this month and expected weaker results in the next three months.

However, earnings for the system LSI business of Samsung saw an increase in Q1 on higher demand for 5G mobile processors and high-resolution image sensors for smartphones.

"While a contraction of the global smartphone market is expected as a result of the COVID-19 outbreak, demand for 5G smartphones is forecast to grow," DJ Koh, president of Samsung's mobile division told the firm's shareholder meeting last month.

Apple will announce its financial results for January to March of 2020 on Thursday.