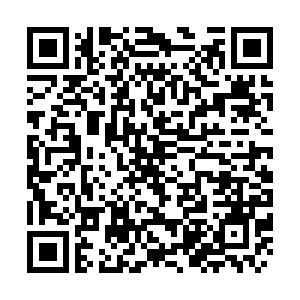 Editor's note: This is the 50th article in the COVID-19 Global Roundup series. Here is the previous one.

More than 130,000 Afghans have fled the coronavirus outbreakin Iran to return home to Afghanistan, due to coronavirus transmission fears in Iran.

The influx of returnees has hit a record high, according to the latest report from International Organization for Migration (IOM). A total of 53,069 undocumented Afghans returned from Iran through the Milak (Nimroz) and Herat (Islam Qala) borders between March 8 to14, which is a 171-percent increase from the previous week's total of 19,562. 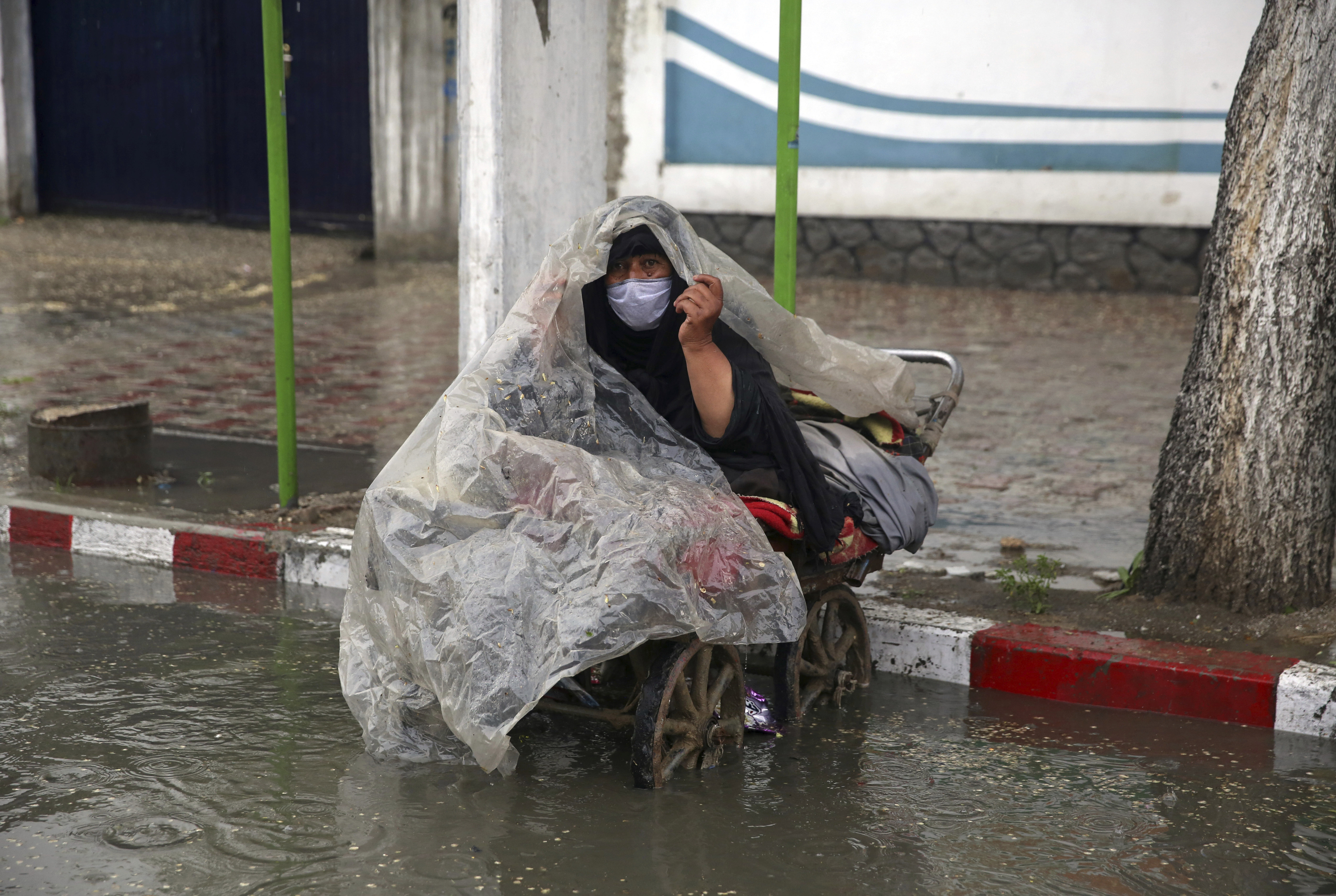 A woman waits to receive alms as she covers herself with a plastic sheet in the rain and wears a protective face mask to help curb the spread of the coronavirus during a quarantine in the holy fasting month of Ramadan in Kabul, Afghanistan, April 28, 2020. /AP

A woman waits to receive alms as she covers herself with a plastic sheet in the rain and wears a protective face mask to help curb the spread of the coronavirus during a quarantine in the holy fasting month of Ramadan in Kabul, Afghanistan, April 28, 2020. /AP

The IOM said that even if the border crossing were to be closed, Afghans who wanted to get home could easily find a way, given how porous the border is. There is a fear are the influx of migrants can cause more potential infections within the Afghan border because of the limited ability to test and keep track of these people.

According to a joint situation report from the World Health Organization (WHO) and the UN's Office for the Coordination of Humanitarian Affairs published last week, despite only 174 Afghans being confirmed as having COVID-19 so far, the real number is believed to be higher.

Myanmar is also facing a flood of panicked migrants trying to rush home after the government said it would close its borders with Thailand to stem the virus from invading the country late last month.

About 60,000 migrant workers scrambled to leave Thailand in March before the land border was closed, as the shutting of businesses left them without an income. 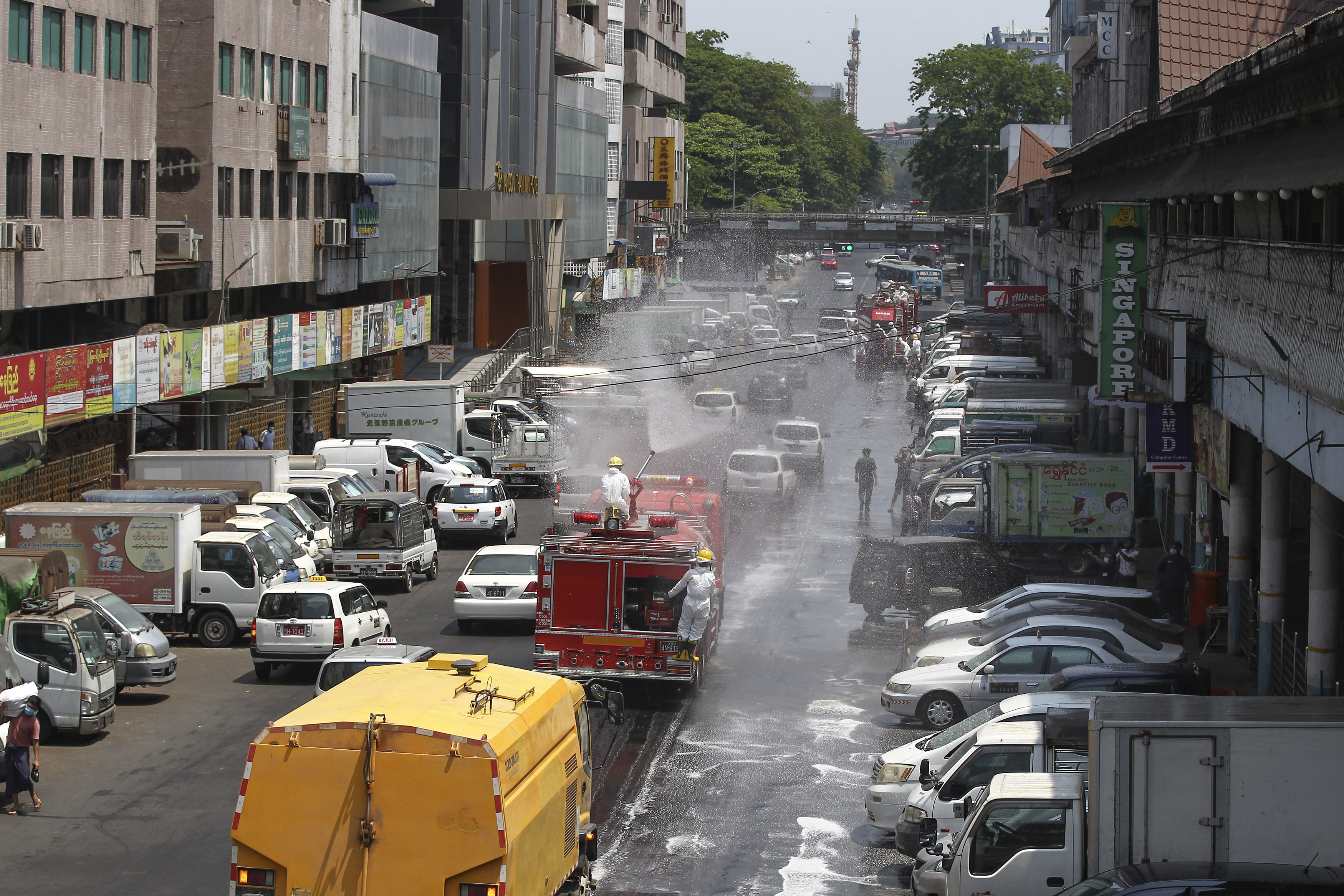 The fire department use fire trucks to spray disinfectant to help curb the the spread of the new coronavirus on a road, April 21, 2020, in Yangon, Myanmar. /AP

The fire department use fire trucks to spray disinfectant to help curb the the spread of the new coronavirus on a road, April 21, 2020, in Yangon, Myanmar. /AP

Across the border, at least half a million migrant workers in Thailand have been left unemployed as a result of the coronavirus crisis, estimates the Migrant Working Group (MWG), a network of non-governmental organizations promoting migrant rights. Based on government registration figures, most of them are from Myanmar, Cambodia and Laos.

The Thai government has introduced a raft of measures to help workers affected by the coronavirus, including financial aid for informal domestic workers and for both Thai and foreign workers registered under the social security system.

But a lot of them aren't covered by coronavirus aid because they were not formally registered.

One glass factory worker from Myanmar said he and dozens of other workers were laid off on March 1, as orders had fallen.

He was unable to look for a new job because his passport and work permit were still with the agency that recruited him.

"There's no point in staying here anymore," he said by phone from Thailand's central Samut Prakan province. "Once the borders are open, I'll go home." 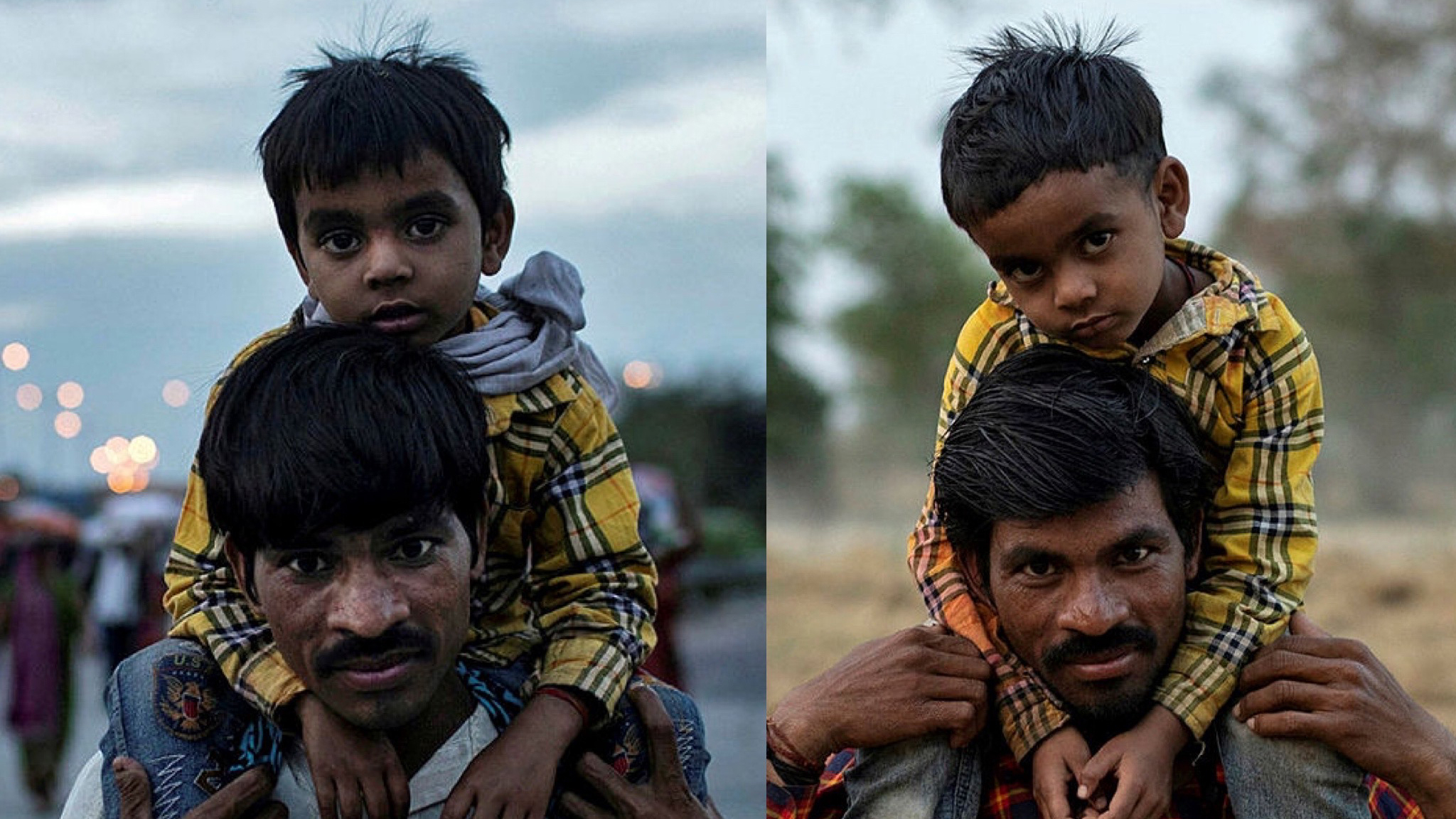 Millions of India's migrant laborers within the border are also struggling to access aid to survive the six-week lockdown where they work and appealing for help from officials back home.

Some even tried to walk thousands of miles back home because of India's strict lockdown measures, which severed transport links. This has taken a toll on the nation's estimated 100 million migrant workers, triggering an exodus from cities where they worked in garment factories, building sites and brick kilns.

The government announced a 23 billion U.S. dollar aid package to help the poor - including the aforementioned migrant workers - but relief has been patchy across the vast country.

With migrant workers scattered across factories, living on the outskirts of cities or sleeping rough, counting them is a challenge.

The local officials have started to collect the information of migrant workers from phone calls to welfare helplines and social media messages, as well as counting them by visiting the makeshift camps where many of the workers live, to help reach out and prevent them from taking the risk of walking all the way home. 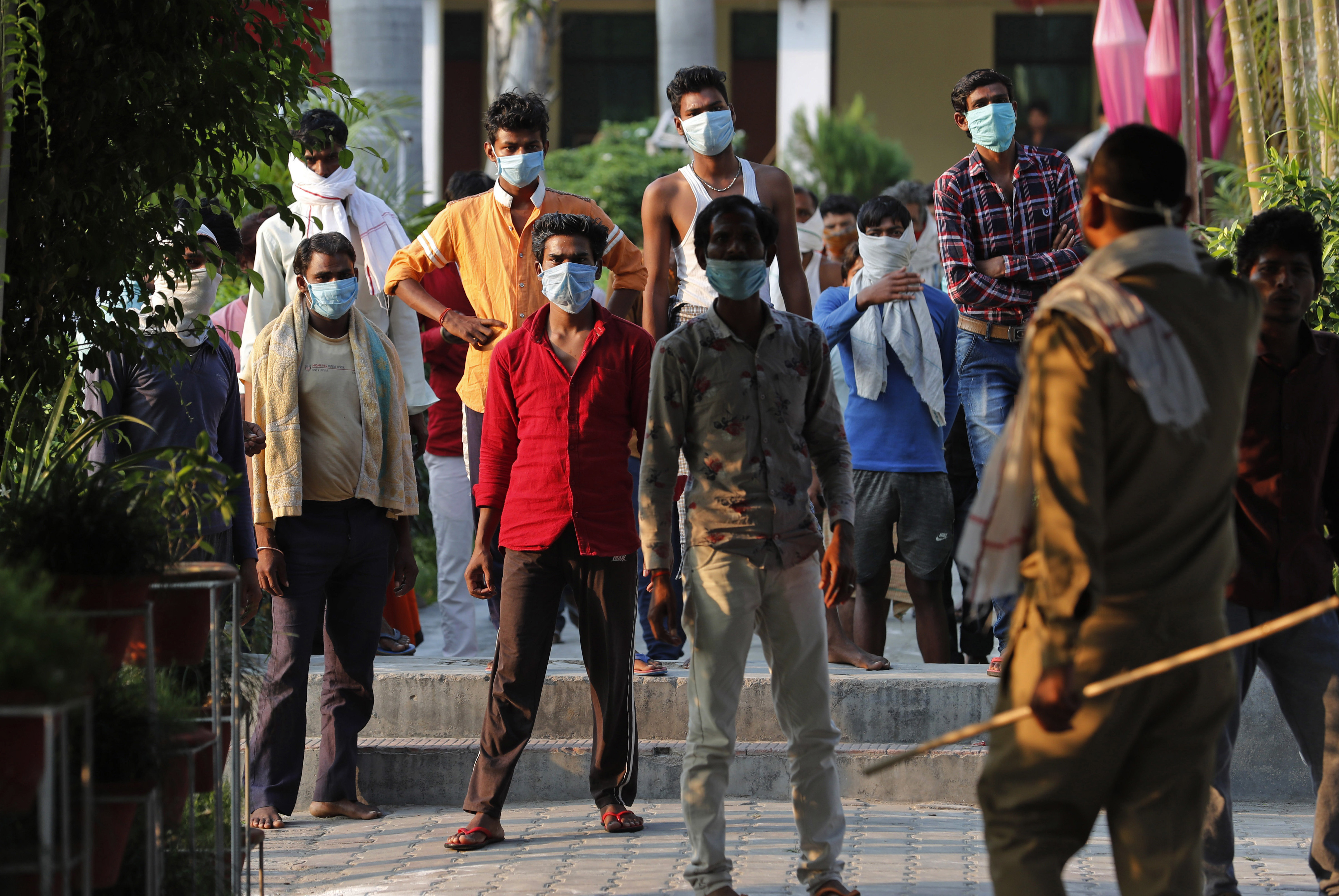 Indian laborers kept in quarantine after arriving from outside the state protest against poor treatment at the quarantine center in Prayagraj city of Uttar Pradesh state, April 29, 2020. /AP

Indian laborers kept in quarantine after arriving from outside the state protest against poor treatment at the quarantine center in Prayagraj city of Uttar Pradesh state, April 29, 2020. /AP

Kalikesh Singh Deo, a politician from Odisha state in eastern India, was inundated with calls for help within hours of the lockdown announcement.

"The system failed these workers because they did not register them over the years," said Deo, a former lawmaker.

Among those who called Deo was Binod Bhoi, a garment worker in south India who was working his shift when the lockdown was announced and he was asked to head back to his room.

"We tried our luck. Calling him helped and we had local authorities at our doorstep immediately," Bhoi said by telephone from the southern town of Coimbatore.

Despite the mammoth challenge they face in trying to document the country's migrant workforce, local officials say an increased awareness of the workers' plight due to the lockdown should boost efforts to register them.

"Till the COVID-19 crisis, no one really thought of the kind of problems migrants faced," said Tirumala Naik, labor commissioner in Odisha state, which has started registering migrants online.

In Tirupur, one of the biggest garment hubs in southern India, the migrant worker database has swelled from a few thousand to 130,000 in the last two weeks, said district leader K Vijayakarthikeyan.

"Now nobody can ignore them or their contribution to the economy." Naik said.