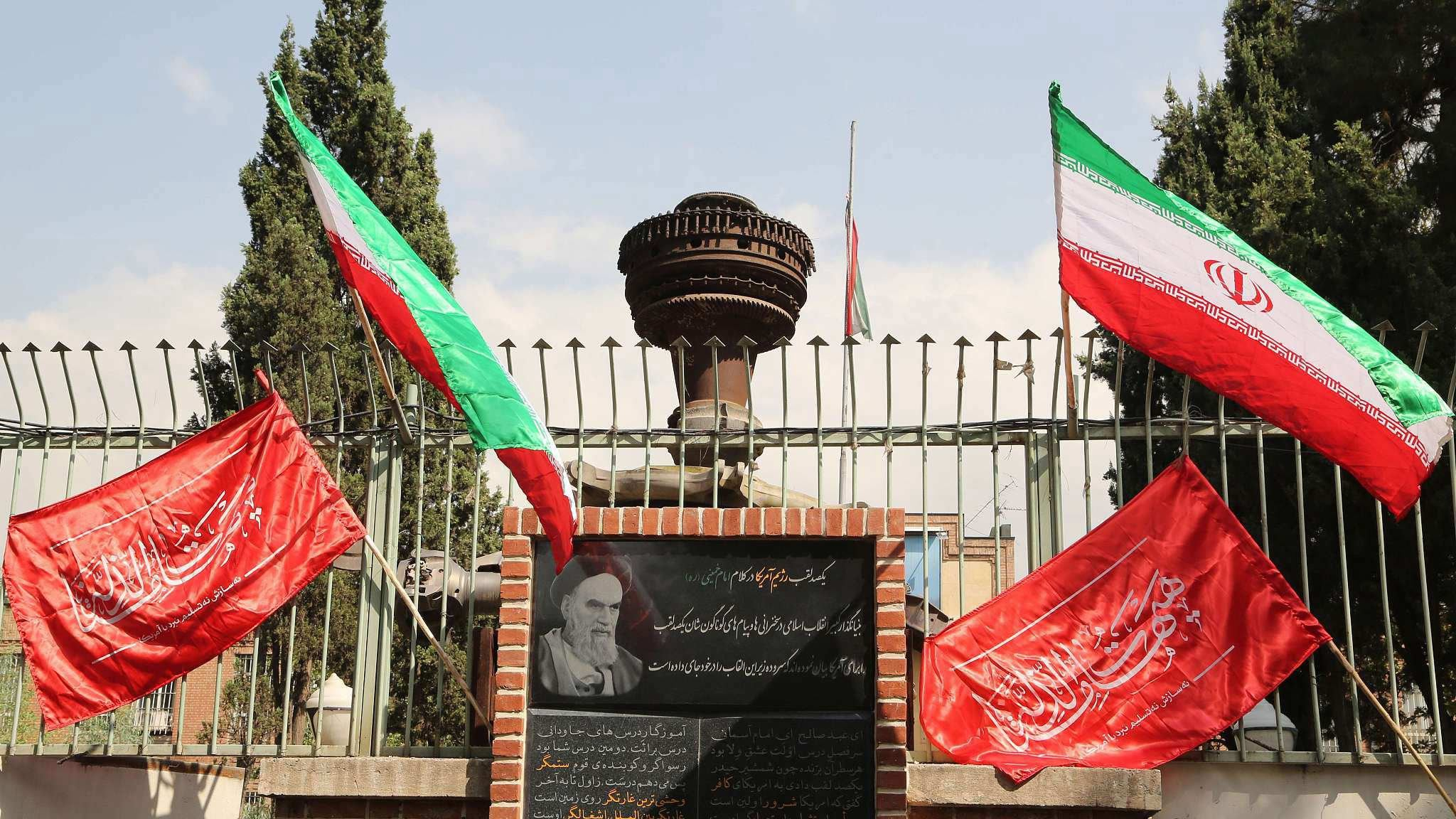 Editor's note: Bobby Naderi is a journalist, a guest contributor in print, radio and television, a documentary filmmaker and member of the Writers Guild of Great Britain. The article reflects the author's opinion and not necessarily the views of CGTN.

In a world on the brink, desperation can make the political class in Washington do surprising things, and that's precisely what they are doing right now. With no clear or great cause, U.S. Secretary of State Mike Pompeo is calling on the United Nations Security Council to renew its arms embargo against Iran before it expires in October.

Cannily enough, Pompeo plans to claim that the United States never withdrew from the Iran nuclear deal on May 8, 2018, also known as the Joint Comprehensive Plan of Action (JCPOA). How appropriate, then, that the top U.S. diplomat would be using the multilateral treaty as justification to "snapback" UN sanctions and extend the arms embargo indefinitely. He has already shared a draft resolution with some council members.

To assess that objectively in this unsettled moment, Pompeo must be dwelling on dreams. His attempt to trademark a new anti-Iran resolution would probably go nowhere, as many things that could make his dreams impossible to achieve.

It's chastening to note that it's not just Washington's enemies who condemn it to solitude on the international stage, it's also Washington's friends. The October expiration is part of Security Council Resolution 2233 that ratified the 5+1 nuclear accord and suspended UN sanctions. The U.S. would probably be left in the dust to convince the remaining signatories with veto power in the Council – the United Kingdom, France, Russia, and China – to trigger the "dispute resolution mechanism." It could backfire.

It's their daunting view that Trump's unilateral sanctions violated the JCPOA and Resolution 2231. Soon after breaking with his allies, the UK, France and Germany expressed their "regret and concern" and have continued their commitment, as the deal guarantees that Iran doesn't develop nuclear weapons.

European political calculations aside, an indefinite arms embargo would go against Resolution 2231 and obstruct the JCPOA's full implementation. This potentially catastrophic mistake would put the Nuclear Non-Proliferation Treaty at stake, add fuel to the fire of distrust, and even trigger a nuclear crisis in the Middle East. As emphasized by Maja Kocijancic, a spokeswoman for the European Commission, "The Iran nuclear deal is a matter of our security, not just the region or Europe but globally." 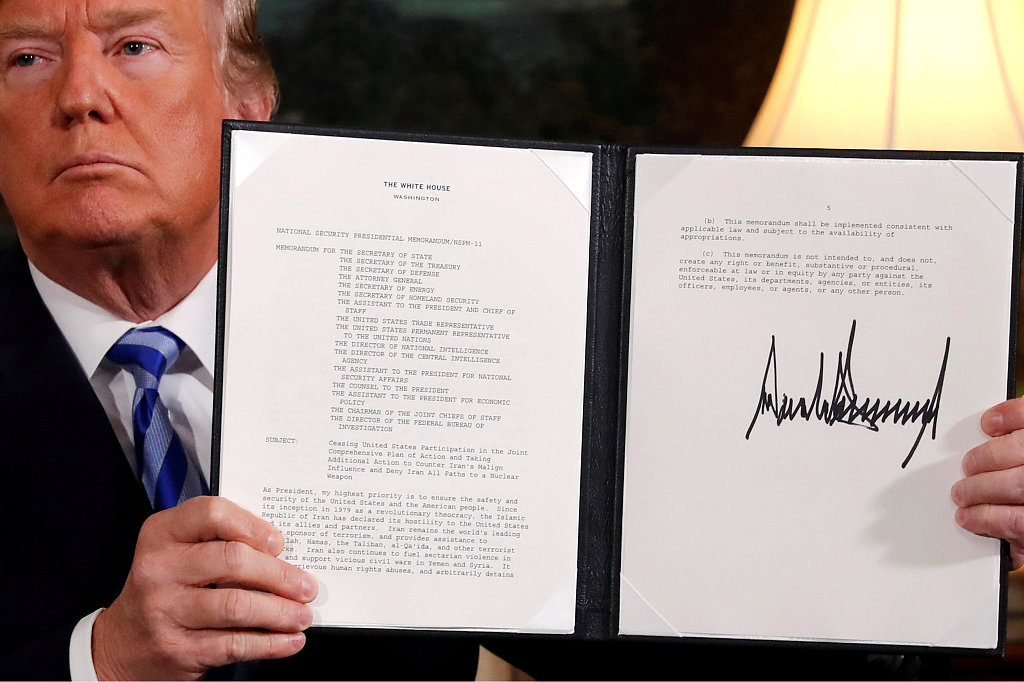 U.S. President Donald Trump holds up a proclamation declaring his intention to withdraw from the JCPOA Iran nuclear agreement after signing it in the Diplomatic Room at the White House in Washington, U.S., May 8, 2018. /VCG Photo

U.S. President Donald Trump holds up a proclamation declaring his intention to withdraw from the JCPOA Iran nuclear agreement after signing it in the Diplomatic Room at the White House in Washington, U.S., May 8, 2018. /VCG Photo

That is to say, the Europeans may be unwilling to embrace Trump's catastrophic foreign policy of unilateralism and isolationism. They want to keep faith with the accord though they have made little progress in helping Iran see the economic benefits of the deal. They would probably resist Washington, as they don't want to raise tensions in the Middle East, where the risk of a direct war between Iran and the U.S. is high. It's in no one's interest.

All of this on a planet unsettled by America's irresponsible policy of withdrawing from other international treaties should leave the road ahead very clear. Even if the Europeans decide to gravitate toward Washington's campaign, Russian officials say an extension of the arms embargo is not their cup of coffee. They see no potential silver lining in 21st-century Washington, where wars are never won but go on forever.

Pompeo would find it hard to convince Moscow to sign on to his foreign policy dreamscape. The Russians continue to criticize Trump for leaving the deal and can veto the resolution. They won't sit idly by and watch while the U.S. casts a disempowering spell over the security council. They have already told their American and European counterparts that they want to sell conventional arms to Iran, including artillery systems, helicopters, planes, and T-90 tanks. Nothing is wrong with that under international law.

In these desperate days of the coronavirus pandemic, though, it's still a worthy game for Washington to play ahead of the presidential election in autumn. Given his administration's poor response to the COVID-19 pandemic, the impulsive, unpredictable and self-obsessed Trump could set up a political drama with Tehran to distract attention. The "wartime president's" re-election may depend on it, even in the worst of times.

With the clarity of hindsight, the world now sees what Trump actually meant when he denounced the nuclear deal. Washington wants no part of the multilateral treaty and cannot present itself to American voters or the international community as a "participant state" of Resolution 2233. It is hard to miss that the JCPOA Trump renounced has become so valuable to his administration these days.

What the political class in Washington can really do will prove limited, a distinct chronology of U.S. decline. They won't feel in good company in October when they try to declare absolute power in the stressed-out 15-member security council.