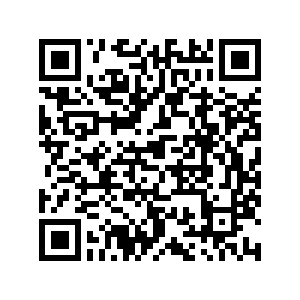 Editor's note: This is the 53rd article in the COVID-19 Global Roundup series. Here is the previous one.

Six weeks into the world's largest lockdown, India has paid a huge economic price and endured exceptional disruptions that have affected the lives of its enormous population.

The country has so far tallied more than 42,800 cases and 1,300 deaths in a steady rise, and some experts fear that the true figures may be higher in the country of 1.3 billion people, where many people have only limited access to healthcare. 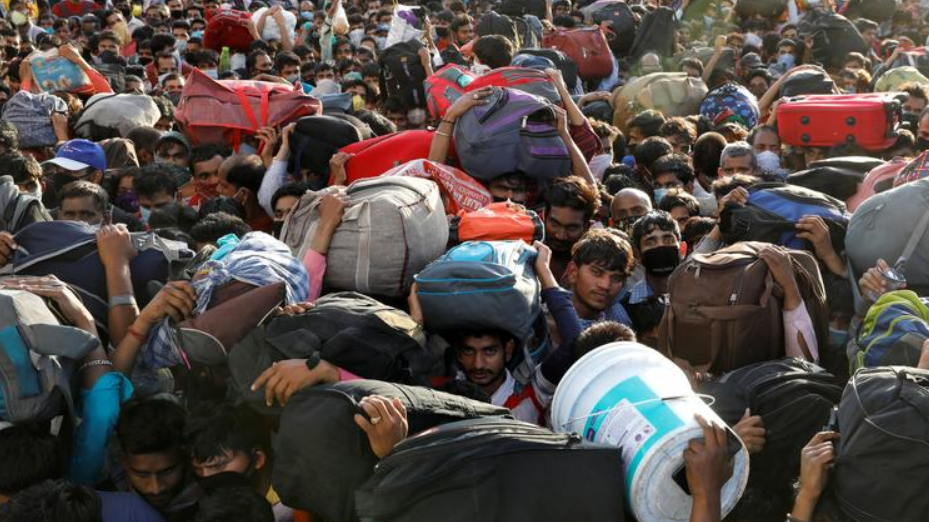 Migrant workers crowd up outside a bus station as they wait to board buses to return to their villages in Ghaziabad, on the outskirts of New Delhi, India, March 28, 2020. /Reuters

Migrant workers crowd up outside a bus station as they wait to board buses to return to their villages in Ghaziabad, on the outskirts of New Delhi, India, March 28, 2020. /Reuters

The lockdown has been one of the strictest in the developing world. While the national government is worried that easing up too quickly could accelerate the pace of infections, some state governments want economic activity to resume as revenue dwindles and millions struggle without income.

On Friday, New Delhi said it would extend its nationwide lockdown for another two weeks after May 4, but would allow "considerable relaxations" in lower-risk districts marked as green and orange zones.

Authorities have mapped the country into red, orange and green zones, depending on the severity of the outbreak. The biggest and most economically-important cities, including New Delhi, Mumbai, Bengaluru, Chennai and Ahmedabad, would all be classified as red zones, infection hotspots, and kept under strict lockdown.

Some activities will remain prohibited throughout the country, regardless of the zone. Those include travel by air, rail and metro and inter-state movement of people by road, while schools and colleges, hotels, restaurants, shopping malls, cinema halls and places of worship will remain closed.

However, restrictions on movement of goods between states and on the manufacturing and distribution of essential items have been lifted.

In an effort to bring back some of the hundreds of thousands of nationals stuck abroad due to coronavirus restrictions, India has embarked on a massive operation involving naval ships and aircraft. As the country banned all incoming international flights in late March, it left vast numbers of workers and students stranded.

A spokesman for the Defense Ministry told AFP on Tuesday that two ships were steaming towards the Maldives and another to the United Arab Emirates – home to a 3.3-million-strong Indian community, who make up around 30 percent of the Gulf state's population.

A government statement said the evacuations would begin on Thursday and that Indian embassies and high commissions were preparing lists of "distressed Indian citizens." The consulate in Dubai said that it alone had almost 200,000 applications, appealing on Twitter for "patience and cooperation" as India undertakes the "massive task" of repatriation. 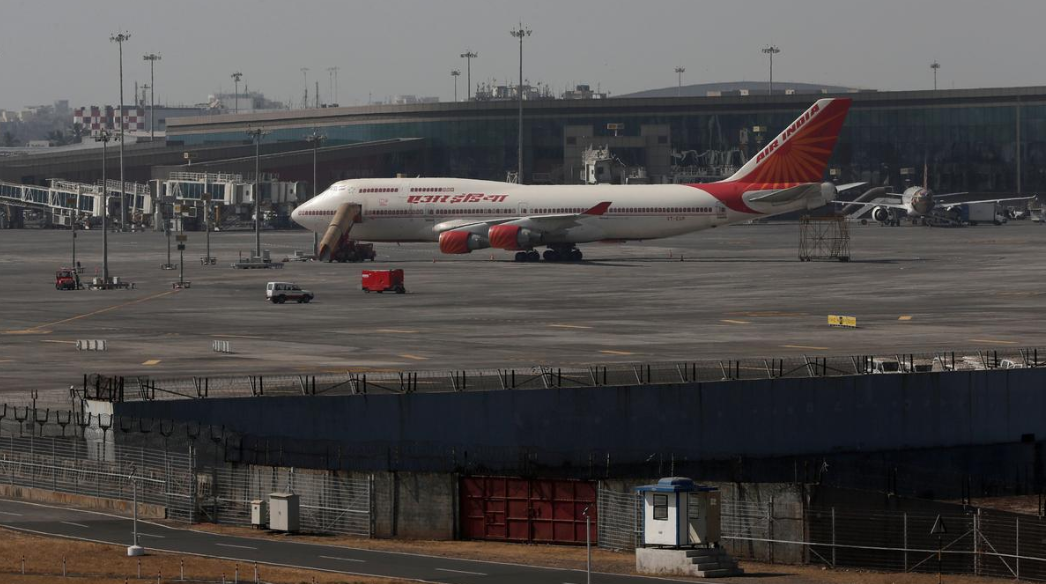 But behind the government's resolute lockdown decisions and its grandeur rescue mission is a very poorly equipped India that lacks sufficient emergency response hardware necessary to confront a rapidly unfolding medical crisis.

India has designated more than 600 hospitals for COVID-19 patients only, comprising about 100,000 isolation beds and about 12,000 intensive care unit beds. It also has trained more than one million doctors and 1.7 million nurses to treat patients, according to government data.

Authorities have tried to ensure that only those infected with the virus go to the designated hospitals. But this separation, aimed at preventing viral outbreaks in hospitals, hasn't always been successful.

It wasn't until Friday that the government said it would provide all health workers with personal protective equipment (PPE). But several non-COVID-19 hospitals in large cities like Mumbai and New Delhi have already reported outbreaks. Experts suspect the outbreaks were caused by patients who didn't know they had the virus.

Faced with an unprecedented global demand for the same medical supplies, India has increased its capacity to manufacture ventilators, oxygen cylinders and PPE.

India is building up a stockpile of 80,000 of the breathing machines that it hopes will cover the 75,000 patients expected to need them in the coming weeks, said P.D. Vaghela, secretary of the government's pharmaceuticals department.

Vaghela said India had almost no domestic manufacturing of PPE before the pandemic. 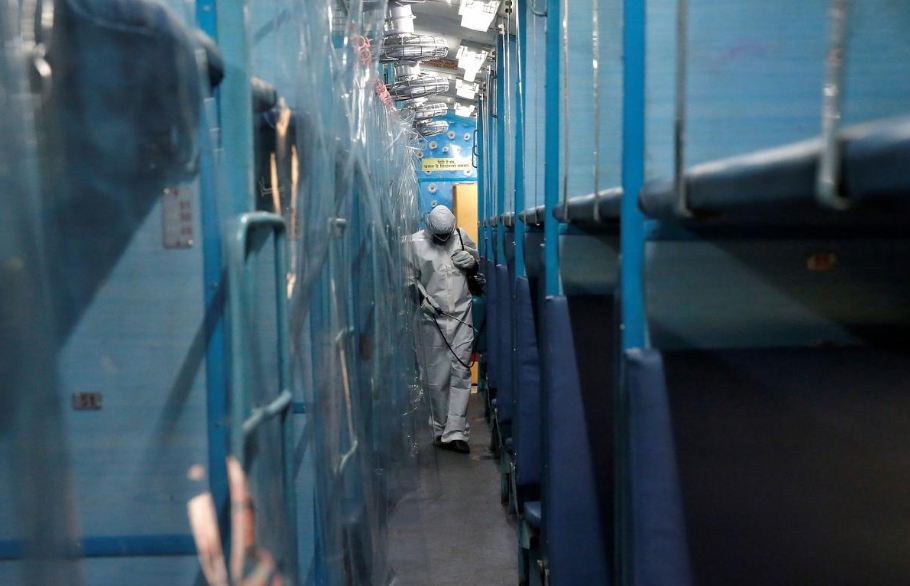 A worker wearing a protective suit disinfects the interior of a passenger train after it was converted into an isolation facility amid concerns about the spread of COVID-19, on the outskirts of Kolkata, India, April 6, 2020. /Reuters

A worker wearing a protective suit disinfects the interior of a passenger train after it was converted into an isolation facility amid concerns about the spread of COVID-19, on the outskirts of Kolkata, India, April 6, 2020. /Reuters

India's testing criteria remain restricted outside of hot spots, where those with minor symptoms, like a runny nose or cough, aren't being tested. But it has increased testing, with 70,000 samples tested daily.

Still, India "needs to be scaling up for a lot more," said Dr. Ashish Jha, the director of Harvard's Global Health Institute. He pointed out that while the lockdown had stopped the virus from spreading as quickly as it has in some countries, that doesn't mean that it won't spread faster when restrictions are lifted.

The country's low rate is at least partly due to the unavailability of testing kits. India awaited the arrival of 2.1 million standard testing kits, mostly from international companies. Officials said the country will need 3.5 million kits.

India's Health Ministry has denied it is under-testing. But Jha warned that India can't afford to test in areas only after outbreaks are discovered.

On top of the acute deficiency in India's healthcare system, the more subtle woes brought about by the pandemic have been disastrously plaguing the country's vulnerable population.

Although officials say rigid restrictions on work and travel are key to beating the virus, the shutdown has endangered the economic survival of many, including an estimated 140 million migrant laborers banned from going home.

Millions of workers are stranded either on the way in temporary shelters or in cities. For most of daily wage earners, buying food is impossible as they earn six dollars a day for survival. Now with no means to find work, many are not even getting one meal a day.

While the government has announced three-month free ration for all National Food Security Act beneficiaries, the beneficiaries could hardly receive the full quota. Government data is based on 2011 census but in these 10 years about 100 million more people are waiting to be added to the list of beneficiaries. Millions in India are facing starvation already.

Large industrial cities across the country have witnessed sporadic incidents of labor unrest since the lockdown began and government efforts to restrict people's movement have seen strong pushbacks, particularly from this vulnerable community.

The enduring plight has finally prompted the government to allow their return to home. The central government said last week migrants as well as others including stranded students and tourists, would be allowed to board specially designated interstate buses and trains if they do not exhibit coronavirus symptoms. Since then, batches of migrant workers have boarded trains to leave the cities where they were stranded for their hometowns. 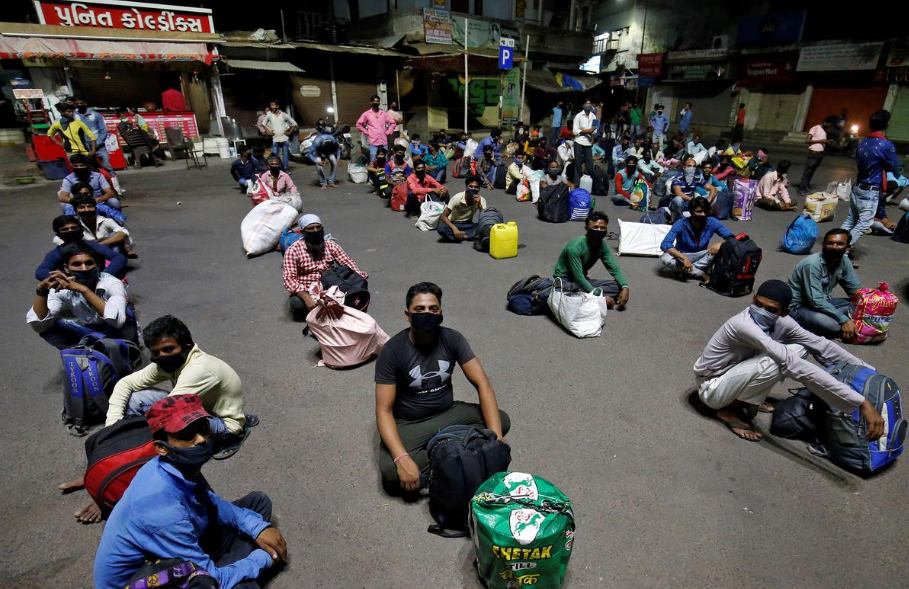 Migrant workers, who were stranded in the western state of Gujarat, sit on a road as they wait to board a train that will take them back to their home state of Billar, Ahmedabad, India, May 4, 2020. /Reuters

Migrant workers, who were stranded in the western state of Gujarat, sit on a road as they wait to board a train that will take them back to their home state of Billar, Ahmedabad, India, May 4, 2020. /Reuters

But government decision to have them pay for train fees has sparked outrage among the destitute laborers. Many of the workers simply cannot afford it even when they are employed, let alone now when they are jobless. As a response, the opposition Congress party has offered to bear the cost of the travel. Describing the move as a "humble contribution" towards the workers, the party's president Sonia Gandhi said these laborers and workers form the backbone of India's economy.

The COVID-19 crisis has been accompanied by what the World Health Organization (WHO) has called an "infodemic" of misinformation. In India, where rumors travel even faster than the coronavirus, "infodemic' has undeniably taken a strong hold. Waves of disinformation from false data and fake remedies to conspiracy theories have led many to take actions that are based on unscientific suggestions, willfully inciting statements, and a slew of other unfounded messages.

To make things worse, some of the information that cannot even withstand minimal examination was sometimes backed up by politicians, community leaders and religious heavyweights. The strengthened credibility of these messages has left a large number of under-educated Indians more prone to suffer from the unfortunate fallout of misinformation.

It has further widened the festering divisions between Hindus and Muslims as some Hindus touted the theories of Muslims being responsible for the coronavirus spread, while some Muslims were led to believe they were subject to targeted quarantines that would deprive them of the capacity to maintain their livelihoods. Some were convinced that cow urine and cow dung could be used to combat the virus and thus ventured drinking them. Some distributed misinterpreted government directives, resulting in masses defying lockdown measures. The list goes on and the overall consequences are not negligible. 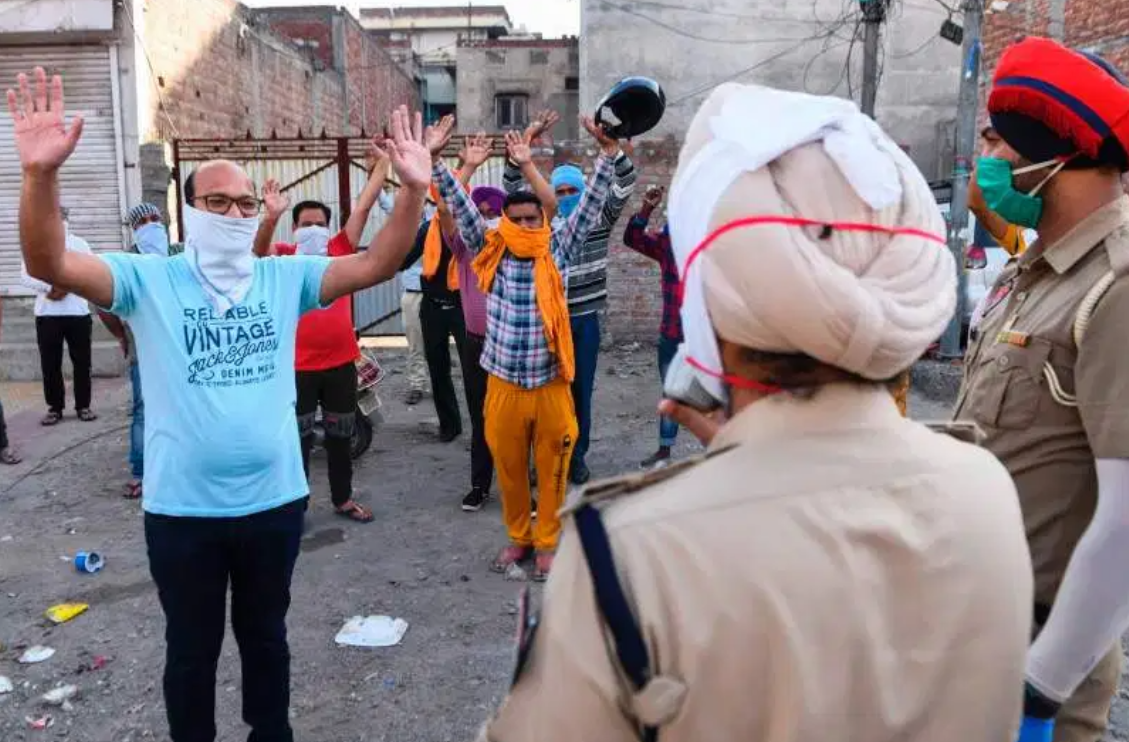 Police officers punish restriction-violators during a government-imposed nationwide lockdown as a preventive measure against the spread of the coronavirus, Amritsar, India, April 16. /AFP

Police officers punish restriction-violators during a government-imposed nationwide lockdown as a preventive measure against the spread of the coronavirus, Amritsar, India, April 16. /AFP

Disinformation has been a chronic problem in India. With the various social media platforms serving as the bridge lubricating the passage for rumor mongering, the "infodemic" currently compounding the country has taken full advantage of these tools.

For a country that has roughly 451 million monthly active internet users, it is hard to contain the spread of disinformation but authorities and social media companies have taken corresponding measures to minimize its reach.

WhatsApp, with an estimated 400 million users in India, has set up a coronavirus information hub in partnership with the WHO, the UN Children's Fund and the UN Development Programme to offer guidance and resources for users. Twitter has been taking down posts that it deems violating its internal rules. On the part of India, it has also told Facebook and Chinese video app TikTok to remove users found to be spreading misinformation about the coronavirus.

The government has recently intensified its clampdown on rampant disinformation, arresting anyone they caught conveying information that lacks factual basis. But it has not seen a substantial result, as it is extremely difficult for the authorities to trace the source of rumors.