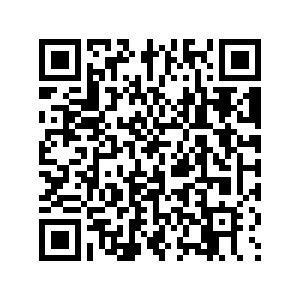 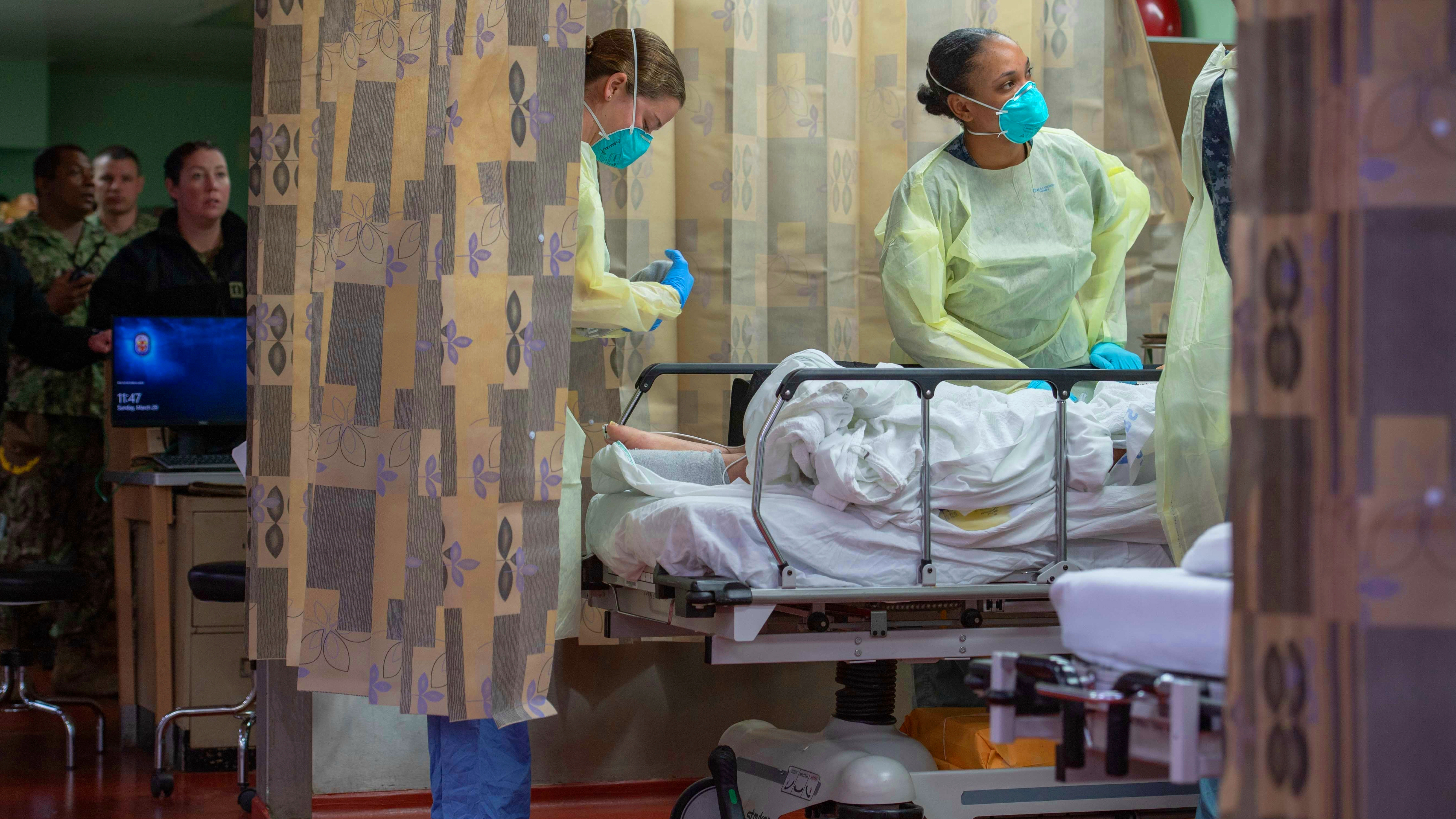 Editor's note: Hannan Hussain is an assistant researcher at the Islamabad Policy Research Institute(IPRI), and an author. The article reflects the author's opinions, and not necessarily the views of CGTN.

A new report covered by the Associated Press, titled "DHS report: China hid virus' severity to hoard supplies" has an awfully familiar ring to it: U.S. officials "believe" China covered up the extent of the coronavirus outbreak – and how contagious the disease is – to stock up on medical supplies needed to respond to it.

U.S. intelligence officials have offered their beliefs on COVID-19 before. It is nothing new. Rather humiliating is the fact that the same officials have failed to translate these so-called beliefs into actionable evidence. From under-reporting allegations to lab-virus claims, U.S. intelligence reports have ended up tall on blame and short on facts. The latest DHS report is no exception.

The four-page intelligence document, dated May 1, claims that Chinese leaders "intentionally concealed the severity" of the pandemic from the world in early January. Washington has gone with this claim before, and amplified it on behalf of its allies who offer no legitimacy whatsoever. What the report doesn't mention is a list of preemptive actions taken by the Trump administration – during its two-month preparation window – to cope with the pandemic.

This blatant allegation that the severity of the pandemic was "intentionally concealed" by Beijing fails to deflect the overarching fact that Washington knew about the outbreak's magnitude well in advance. In fact, there is evidence to establish that on January 10 and January 23 respectively, the World Health Organization and serving U.S. intelligence officials offered two different warnings of transmission risks to the President. All of them went rejected. Beijing was never in the picture.

The report also alleges that China increased imports and decreased exports of medical supplies "by denying there were export restrictions obfuscating and delaying provision of its trade data." The allegation – advertised by the report as highly specific –  never once explicates what these so-called "export restrictions" are. More significantly, Beijing's trading essentials are part of public knowledge, and follow a pattern of transparency that Washington has repeatedly chosen to deny. No intelligence report can change that. 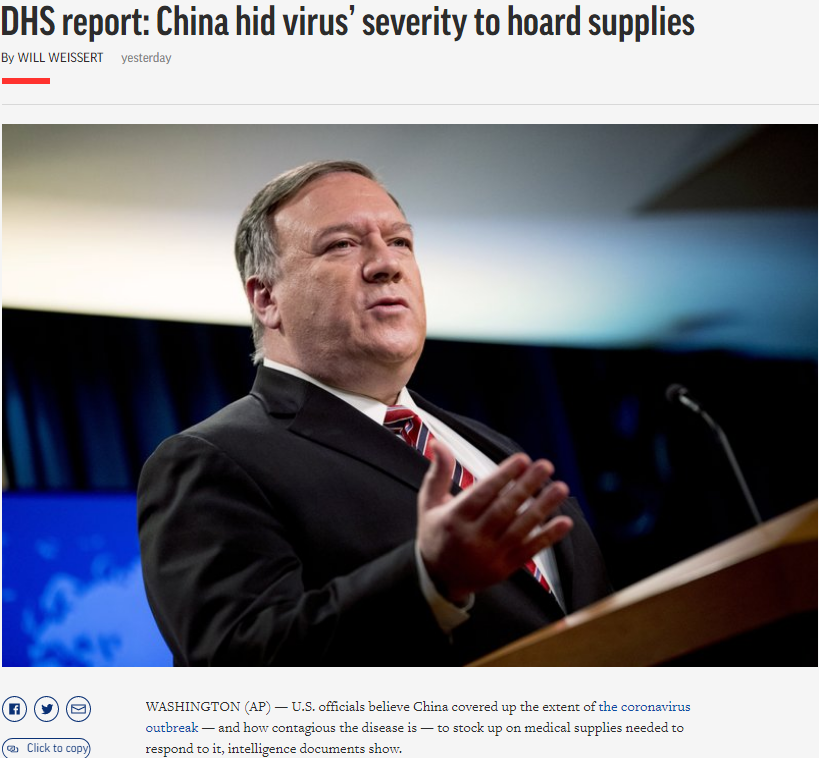 A screenshot of the AP News report.

A screenshot of the AP News report.

To illustrate how distorted and politically motivated the so-called "DHS findings" really are, look no further than Associated Press' own rebuttals: "Intelligence has just reported to me that I was correct, and that they did NOT bring up the coronavirus subject matter until late into January, just prior to my banning China from the U.S.," Trump wrote without citing specifics. "Also, they only spoke of the virus in a very non-threatening, or matter of fact, manner."

It is this same absence of specifics that dominates the deficiencies of the current report: it claims China "held off" informing the World Health Organization of a COVID-19 "contagion" throughout most of January. Yet it brazenly neglects all the COVID-19 growth projections captured by the WHO in Beijing during the same month.

Further clarifications by The Associated Press confirmed that Beijing informed the WHO of the outbreak on December 31, contacted the U.S.  Centers for Disease Control (CDC) days later, and publicly identified the pathogen as a novel coronavirus on January 8. There is not a single date in the report to indicate that Washington picked up on Beijing's correspondence at the CDC offices, and acted accordingly. Similarly, there is nothing to explain why the Trump administration repeatedly failed to ramp up domestic medical supplies, and deployed flawed testing kits within its own borders.

Reporter Will Weissert, who ran the AP coverage, categorically states that there is "no public evidence" to suggest China was behind some intentional plot to buy up the world's medical supplies. It is also worth pointing out that very recently, President Trump escalated his foul-play and wrongfully speculated that China may have unleashed COVID-19 due to some kind of horrible "mistake."

Thus, it is abundantly clear that Washington's executive-intelligence nexus seems to be reviving and disintegrating by the day. Pointing the gun towards Beijing, and citing unnamed officials without rhyme or reason, does nothing to plug that deficiencwhoy. If the report confirms any reality at all, it is that Trump's desperation to taint China's reputation is exposing the myth of his self-proclaimed transparency craft. America can't even get basic intelligence right.

Another malicious example of an all-guns-blazing approach towards Beijing surfaced on May 2, when Secretary of State Mike Pompeo made a surprisingly similar claim to the DHS report. He said there was "enormous evidence" that the COVID-19 outbreak originated in a Chinese laboratory. This lab theory – debunked by China, major media, and Trump's own intelligence ranks – has now fallen in the hands of Pompeo, just like the allegations on Chinese trade data, COVID-19 severity, and medical supplies that have fallen from one intelligence report to the other. "Look, the best experts so far seem to think it was man-made. I have no reason to disbelieve that at this point", claimed Pompeo in his televised interview.

Is it the lab, the outbreak, or the lack of coordination? Washington has the entire world in disbelief.