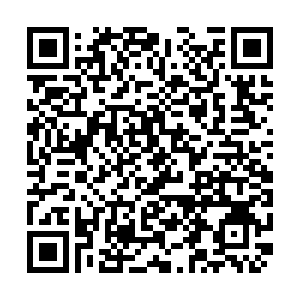 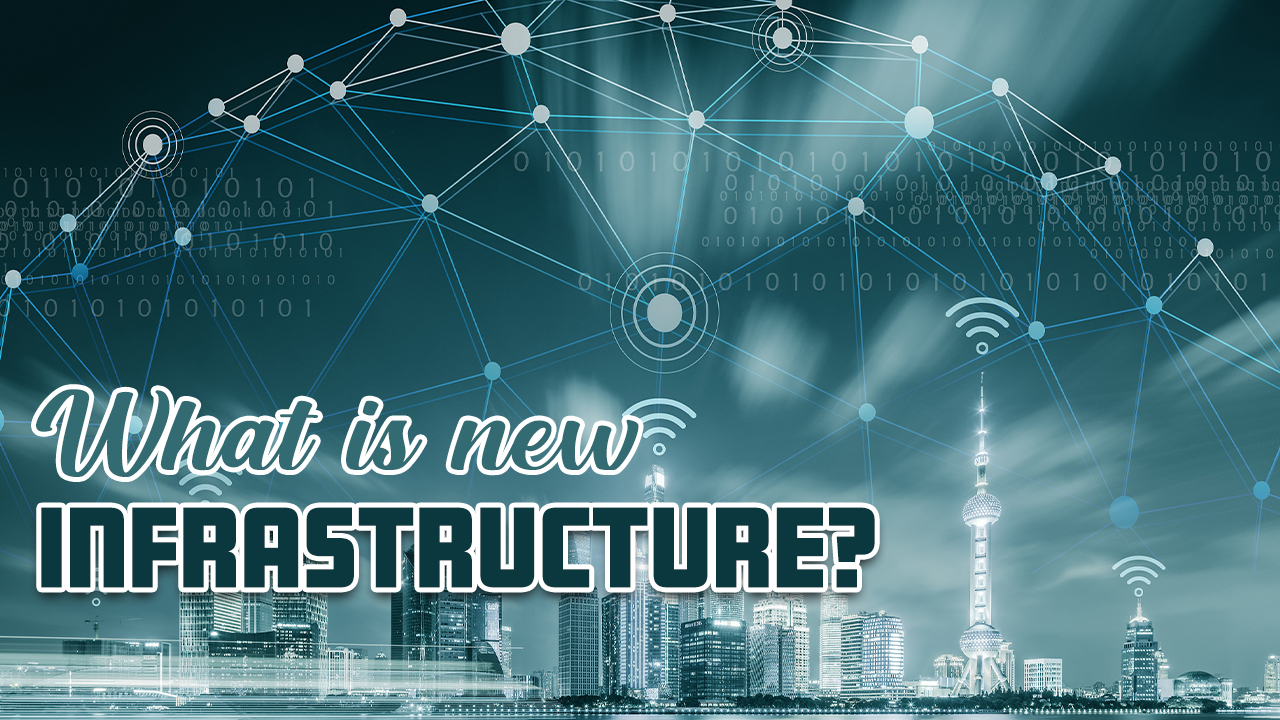 Consumption and investment – also known as two of the three horse carriages for growth in China – contributed 57.8 percent and 31.2 percent to China's GDP in 2019, respectively, according to China's National Bureau of Statistics (NBS).

However, in the first three months of 2020, the country's total retail sales of consumer goods, a major indicator of consumption growth, tumbled by 19 percent from 7.86 trillion yuan a year ago, as the outbreak of COVID-19 shut almost all public places across China and confined people to their homes.

At present, China's economy has started to recover, but demand remains weak, together with uncertainties in the foreign trade market, leading its official Purchasing Managers' Index (PMI) to edge down to 50.8 in April from a record high of 52 in March.

Investment in e-commerce services, nevertheless, in the first quarter this year increased by 39.6 percent from a year earlier, according to NBS, and online sales of goods in Q1 reached over 1,800 billion yuan (about 253.9 billion U.S. dollars) with an increase of 5.9 percent year on year. 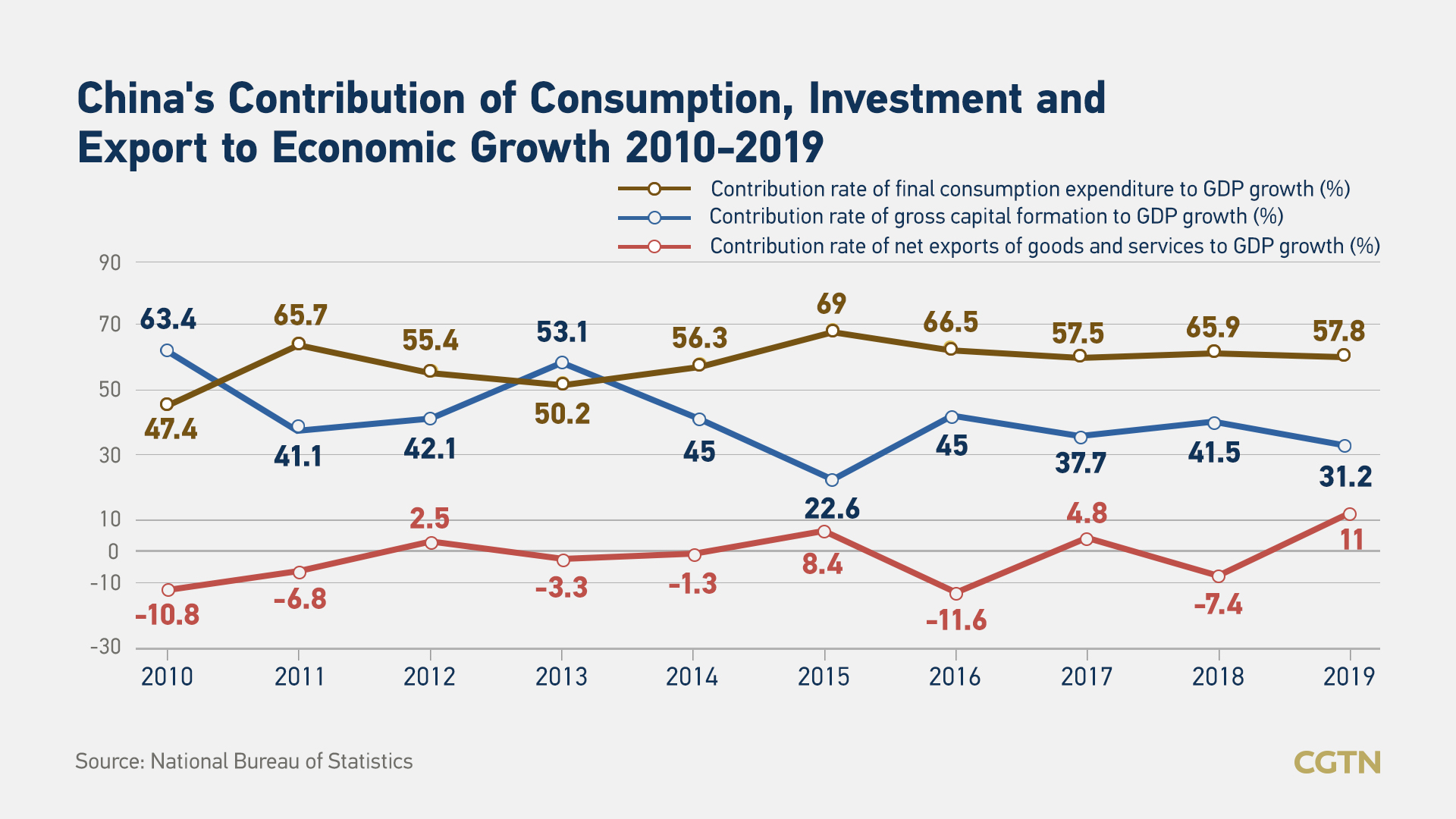 Twelve years ago, China unveiled its ever largest fiscal stimulus package to avoid the wrath of the 2008 Global Financial Crisis.

About four trillion yuan (about 586 billion U.S. dollars) was injected for the construction of livelihood projects, such as indemnificatory housing, and major infrastructures, such as railways, highways and airports, which played an important role in expanding domestic demand, increasing employment and stimulating economic growth, but also triggered problems like non-performing loans in the banking industry and excess capacity. 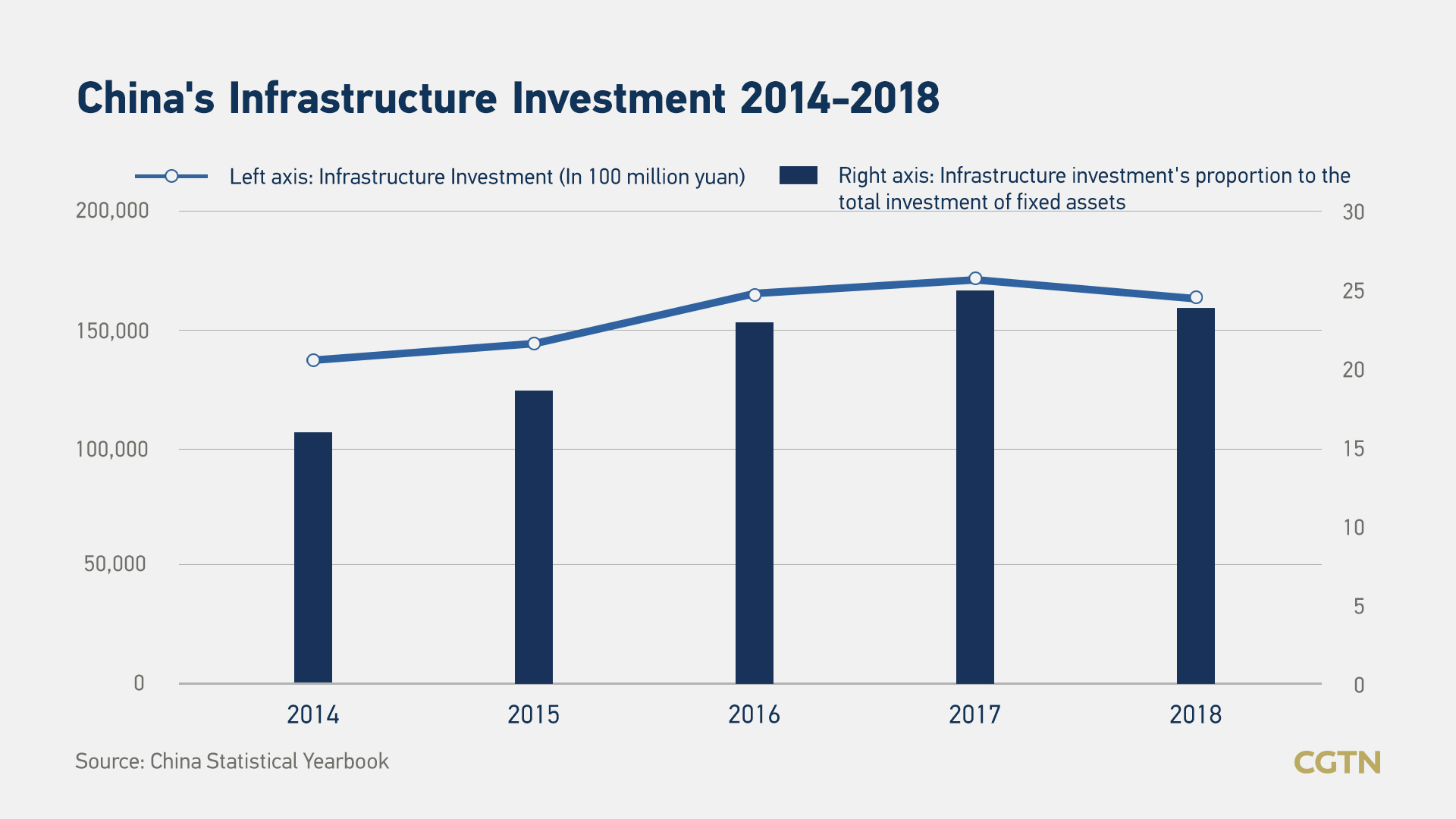 In this context, China is eyeing more targeted investments in projects, namely "new infrastructure," to facilitate innovation and strengthen weak links in socioeconomic development, thereby offsetting the economic impact of the pandemic and achieving sustainable growth.

According to incomplete statistics, the total investment on major projects this year announced by local governments in China recently comes up to nearly 34 trillion yuan (4.9 trillion U.S. dollars), with most belonging to "new infrastructure" projects.

What are new infrastructure projects?

A meeting of the Standing Committee of the Political Bureau of the Communist Party of China Central Committee held in March urged expediting the development of a fresh round of new infrastructure projects, such as construction of 5G networks.

"The traditional infrastructure is often related to the basic facilities for survival and development, including transportation and hydro-power, while new infrastructure is mainly to adapt to the development of some industries, such as e-commerce and green and new energy, which acts as new growth drivers," Wang Jian, director of the Cross-Border E-commerce Research Center of University of International Business and Economics told CGTN.

"The new infrastructure is needed for future network and digital development... but I think it may not be limited to these areas [mentioned above] in the future," he added.

Huang Rihan, executive director of an economic think tank, is more inclined toward the view that the new infrastructure should be more equivalent to the digital infrastructure, adding that "it will assist in the upgrading of digitalization and intelligence, thereby helping the transformation of the Chinese economy."

Why engage in new infrastructure development?

"It is just the right time to propose the [development of] new infrastructure. For now, China has completed the initial stage of traditional economic construction, but needs continuous improvement, especially in some remote rural areas. And Chinese people are still paying for the construction of traditional infrastructure facilities. For example, China's vehicular traffic is still heavily charged," said Wang.

He also said the epidemic had made people more accustomed to online work and life. "It will inevitably trigger the digital transformation of not only the business sector but the entire society, requiring a strong infrastructure construction suitable for digitalization." 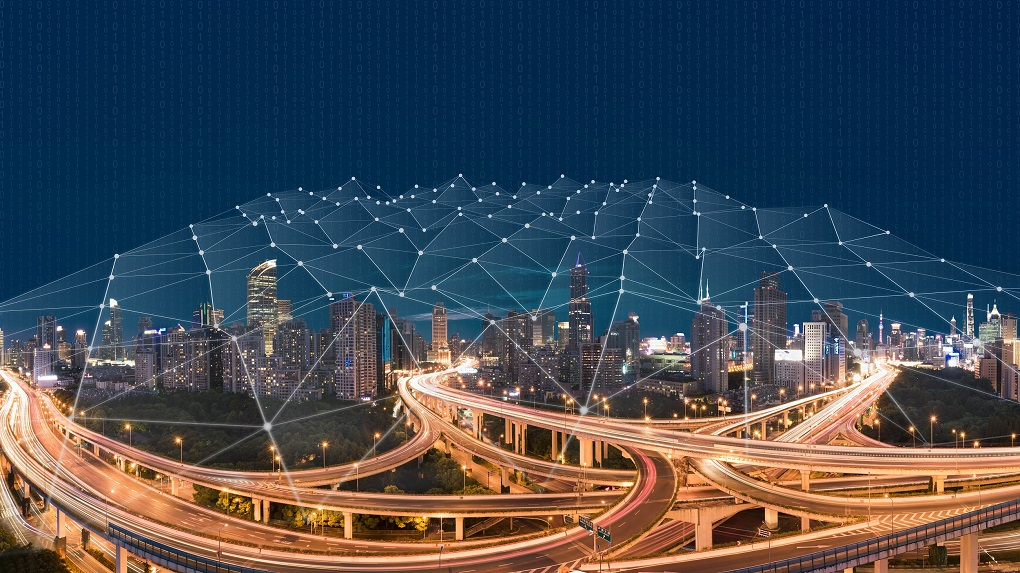 Huang made the point from the perspective of international relations, contending that the competition of all major powers is actually the competition of national strength, and technology plays a vital role in national strength. "In other words, whoever is at the helm of science and technology will lead the world, just like the UK in the first industrial revolution, Germany and Japan in the second, and the United States in the third," he told CGTN.

"China's national strength will be greatly improved with advantages in AI, IoT and 5G in the future. It can be said that technological innovation and development, or new infrastructure is very important for China," he said.

"First of all, we can see that the era of the digital economy has greatly helped the prevention and control of the epidemic as lots of human services have gradually been transferred to online, greatly reducing contact between people," said Huang.

"What's more, traditional infrastructure in China has relatively saturated, but digitalization is new and can yield new business formats, such as new forms of retail that can improve the efficiency of selling and buying via bridging e-commerce, physical retail and logistics, consequently building new consumption power," he added.

In the past, China's local governments have had the tendency to over-invest once a policy was proposed, but it's difficult to judge whether such a situation will emerge in the construction of new infrastructure or not, said Wang.

"In addition, the construction of new infrastructure is completely different from the traditional one," said Huang, explaining that besides hardware, it also involves software and services, which are not easy to evaluate in the investment process and are updated quickly.

"Therefore, in the process of building new infrastructure, we should strengthen management and coordination with reasonable assessment, avoiding huge losses to the entire society caused by blindness," he told CGTN.

Who will foot the bill?

In Huang's view, the government and enterprises, probably together with private capital, will pay for the construction of digital infrastructure in the future, and public-private partnership (PPP) could be a very important model.

"All parties will invest, adhering to the principle that whoever invests will benefit, jointly promoting the development of the digital economy. More importantly, it will allow more enterprises and more ordinary people to benefit rather than a few, which defines the characteristics of new infrastructure: fairness and inclusiveness," he said.

Wang emphasized that the private sector or the government must make market-oriented investment. "Only in this way, can we make effective use of social resources and better suppress blind investment."

"Also, an accounting system for return on investment is essential, as well as the exploration of the best mode of social capital operation and social returns," Wang said. 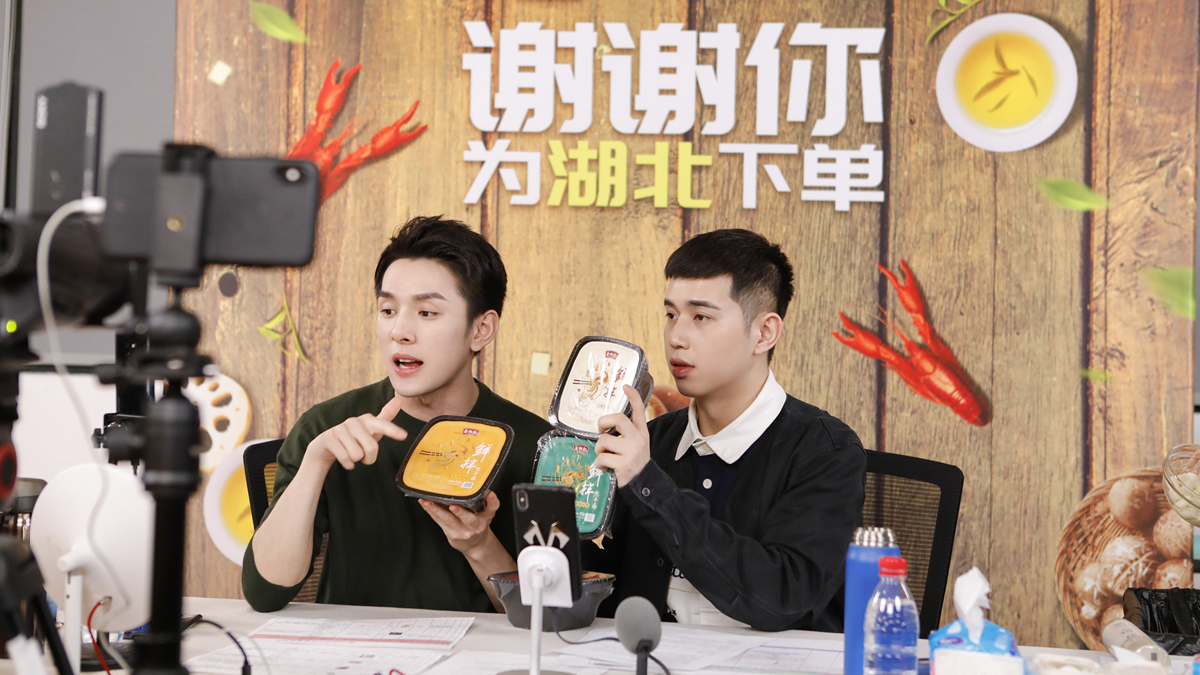 Li Jiaqi (L), one of the top influencers in China who has built his online fandom and e-commerce business on Taobao, sells products with his assistant during a livestream. /CGTN

Li Jiaqi (L), one of the top influencers in China who has built his online fandom and e-commerce business on Taobao, sells products with his assistant during a livestream. /CGTN

Huang underlined that the new infrastructure is an important driving force for bridging the gap between China's urban and rural areas as well as eradicating poverty.

"As we all know, though there are over 900 million netizens in China, some old people in remote areas are indeed far from the digital economy. Thus, policies and investment will gradually lean towards those areas. For example, the fast-growing rural e-commerce helps farmers sell products via livestreams amid the pandemic, and sinking markets, referring to small-town and rural markets of China, are the main source of customers for Chinese e-commerce firm Pinduoduo," he said.

China's position in the world

"China's 5G technology now does have unique advantages, as can be seen from the suppression of Huawei by the U.S.," said Huang.

"Moreover, Chinese internet companies are very competitive globally, including Alibaba, Huawei, Tencent, JD.com and Meituan, which have invested heavily in digital infrastructure and continuously strengthened their research and development efforts in the area," he added.

Both experts believed that as part of an active fiscal policy, the new infrastructure can bring employment, consumption and economic growth in the short term, and is expected to promote the stable economic development and digital transformation of China in the long run.

Wang said the Chinese e-commerce sector led the world in business-to-consumer (B2C) model, but in terms of business-to-business (B2B), it is still somewhat backward. "Because China has not gone through the informatization of the industrial sector, the industrial chain and the governmental regulation and taxation, there exist incompatibilities in the existing state of informatization between enterprises."