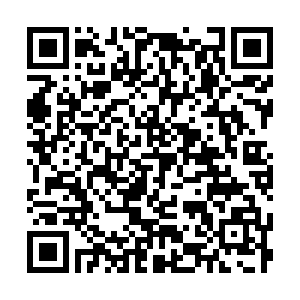 The Five-Year Plans for National Economic and Social Development, or the Five-Year Plans (FYP) in short, are a series of social and economic initiatives issued since 1953 in China to map the direction of future development, in which industrial restructuring serves as an indispensable part.

As the Cold War gradually unfolded between the socialist camp led by the former Soviet Union and the capitalist camp led by the United States, for most countries in the world at that time, rebuilding or restoring a complete industrialization system was the most important task. China's first FYP running from 1953 to 1957, set ambitious goals for industries and, in the meantime, developed agricultural producers' cooperatives to cater to the socialist transformation of the agriculture and handicraft industries.

The planning worked. About 595 large and medium-sized projects were completed and put into production by 1957, laying the framework of China's industrialization. The gross value of industrial and agricultural products in that year surged by 128.6 and 101 percent, respectively, from 1952. However, many problems were caused, such as an unbalanced growth path between industry and agriculture and a shortage of grain output to keep pace with population growth, which profoundly affected the overall development of China's economy.

The following FYPs proceeded with their emphasis on heavy industry. From 1952 to 1978, the average annual growth rate of China's value-added industrial output, an important economic indicator, reached 11.5 percent, and its proportion in GDP increased from about 10 percent to 44.4 percent, marking China's transformation into a major industrial power in the world. 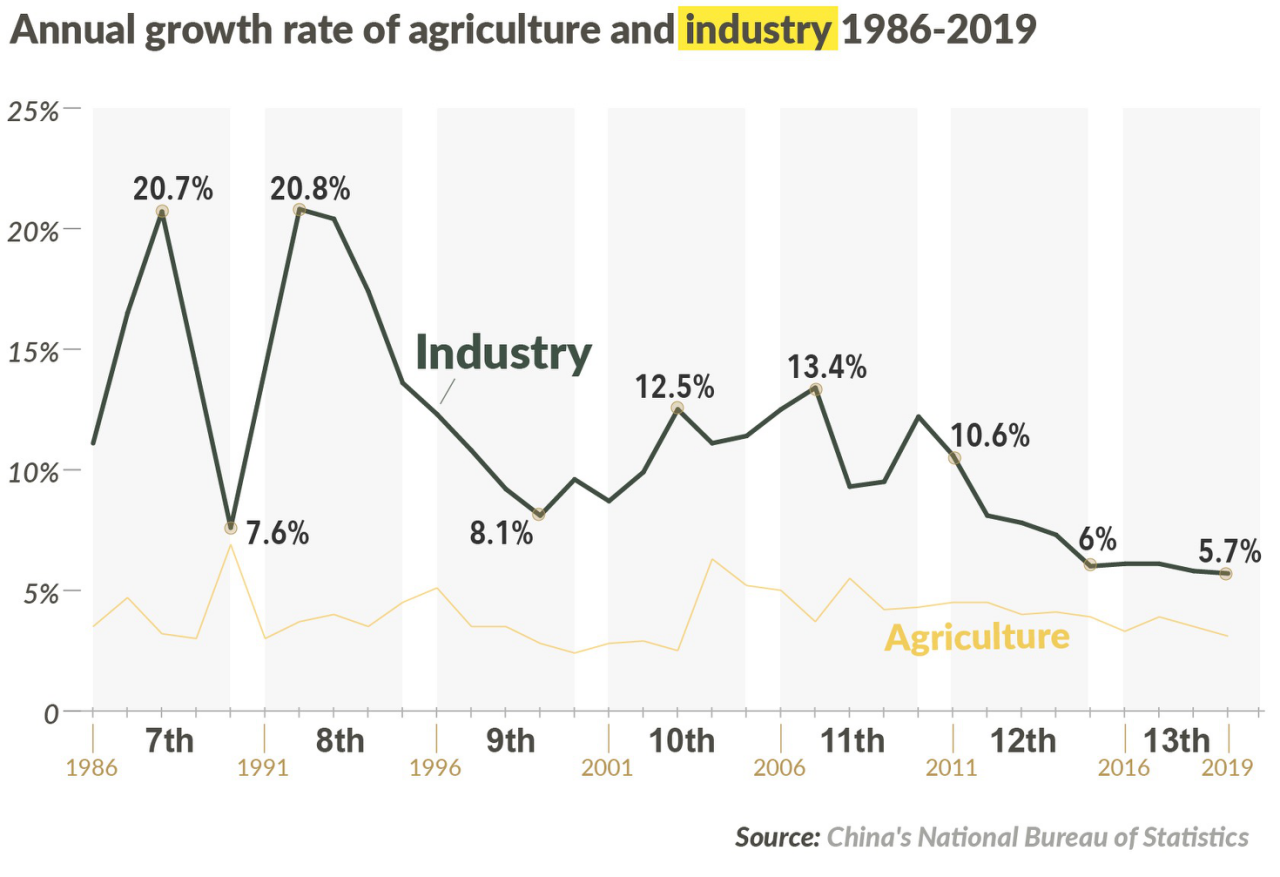 Since the implementation of the first FYP, the country's road to the industrialization has been focusing on the growth of economic volume and speed, while ignoring the problems of resource depletion, environmental pollution, and ecological damage. There are more and more constraints on further economic growth. Meanwhile, the reality that the agricultural sector still lags behind, and industrial growth came at the expense of agriculture has not changed.

Then came the 11th FYP (2006-2010), which set out the main tasks of the country, including fully implementing the scientific development concept, improving independent innovation capabilities, and accelerating the transformation of economic growth mode to an intensive one. More efforts were since then channeled to enhance the innovative ability and deepen reform and opening-up.

During the implementation of the 12th FYP (2011-2015), China's economy has been transitioning from a phase of rapid growth to a stage of high-quality development. The country has since 2012 showed greater tolerance of lower growth rates in the pursuit of a better structure, quality and efficiency.

In response to such major adjustment, the country's 13th FYP (2016-2020) said that it would move up in the value chain by abandoning old heavy industry and building up bases of modern information-intensive infrastructure and put forward an initiative called "Made in China 2025" to comprehensively upgrade Chinese industry and to obtain a bigger part of the global production chains. 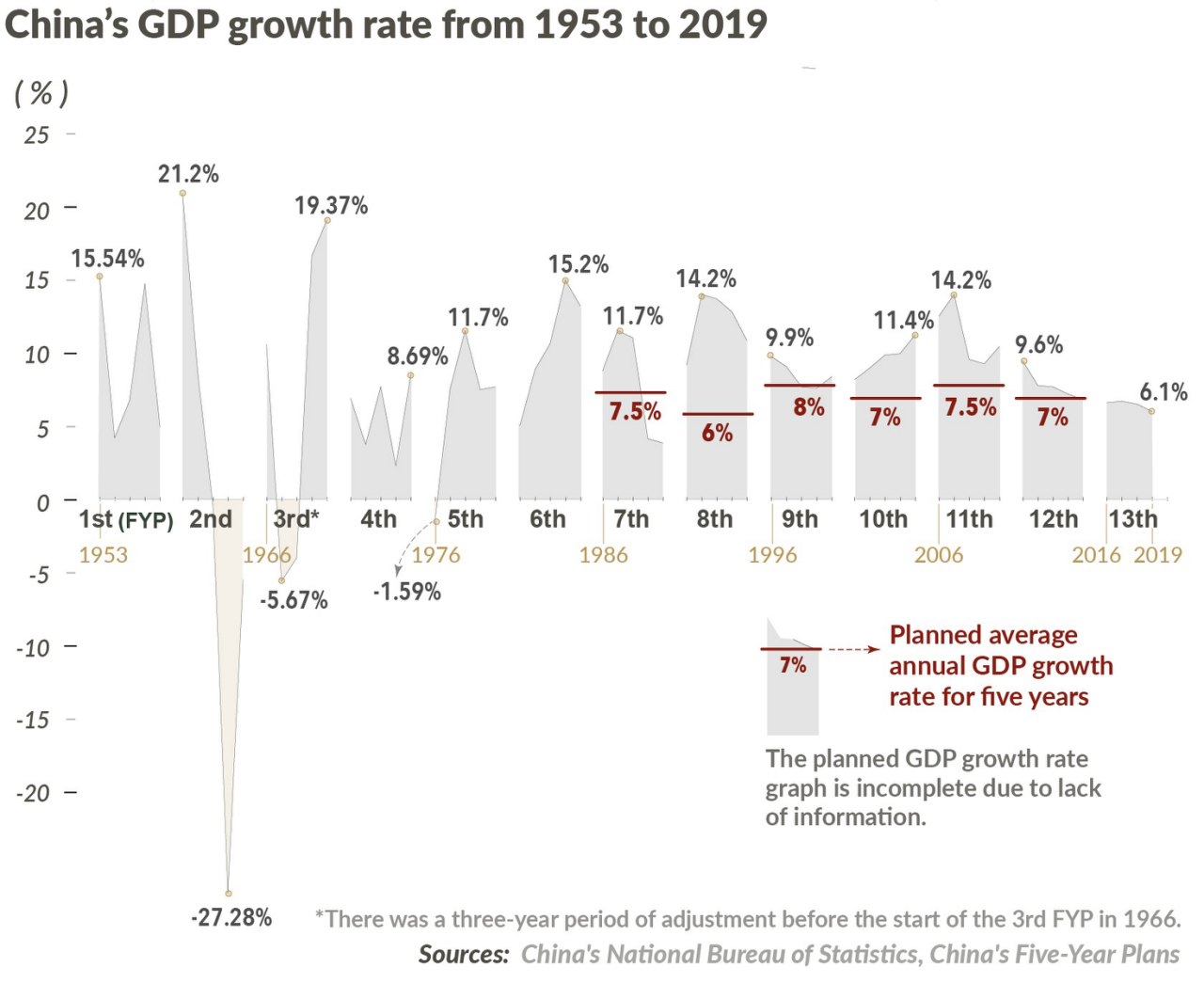 The National Bureau of Statistics (NBS) formally divided sectors in April 1985, with the primary industry being agriculture (including forestry, animal husbandry and fishery), the second sector being industry (including extractive industry, manufacturing, tap water, electricity, and steam) and the construction industry, and the tertiary industry being the circulation sector and service sector.

The 7th FYP (1986-1990) put reform at the top of the agenda and coordinate economic development with reform. It also stressed to adapt to the changing structure of social demand and the demands of economic modernization and to further adjust the industrial structure.

With the reform and opening up going full steam ahead, the rapidly developing industrialization and urbanization, enterprises, residents, governments and other departments had increasingly strong demands for the service industry, and the contribution rate of the tertiary industry to economic growth has continued to increase.

At the end of 1978, the added value of China's tertiary industry accounted for only 24.6 percent of GDP, ranking at the bottom of the three industries, 3.1 and 23.1 percentage points lower than the primary and secondary industries, respectively.

Since the reform and opening-up policy, the proportion of employees in China's primary industry to total employment has been on the decline, with an average annual reduction of 1.22 percent, while the proportions of employed persons in the secondary and tertiary industries have continued to increase, with an average annual growth of 0.34 percent and 0.88 percent respectively. The tertiary industry has demonstrated pronounced advantages in absorbing employees.

It can also be found that the proportion of China's primary industry to GDP has continued to decline since 1980, while that of the tertiary industry has demonstrated a continued upward trend. The performance of the secondary industry has remained on the whole stable. 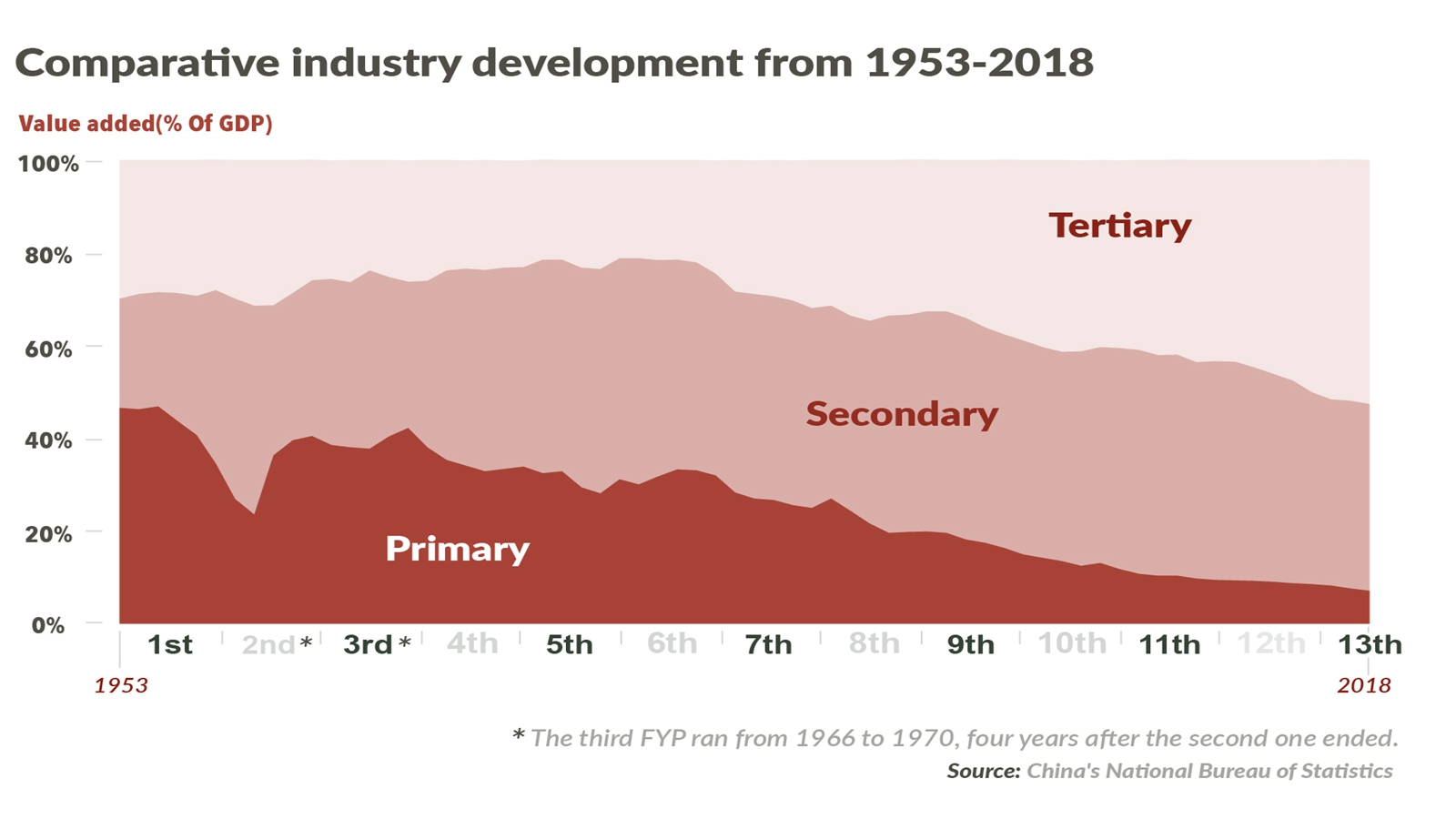 As of 2019, the three sectors accounted for 7.1, 39.0 and 53.9 percent of GDP, respectively. In addition, the tertiary industry has, for the first time, outweighed the secondary industry in 2016 in terms of proportion to GDP, which indicates the industry has gained the upper hand in both absorbing employment and GDP contributions.

That marked change should be attributed to the second-largest economy's planning. During the 11th FYP (2006-2010), the focus was given to the development of the country's tertiary sector. The goal was to increase the share that sector contributed to GDP to 43.4 percent in 2010, but the final figure was 43 percent. Work is still required to increase job opportunities in the sector.

During the period of the 12th FYP (2011-2015), China accelerated the building of the open economic system and promoted the reform and opening-up in the service sector. The average annual growth of service imports and exports was 15.7 percent, climbing up to the second in the world from the 4th at the end of the 11th five-year plan. Among these, the average annual growth of service export was 11 percent, and that of service import settled at 19.4 percent.

The economy entered a stable growing phase during the 12th FYP, while the economic growth rate declined to 7.8 percent from 11.2 percent in the 11th FYP. Simultaneously, the CO2 emissions growth rate declined from 8.32 percent (2009-2012 mean) to 1.82 percent (2012-2014 mean). Industrial structure adjustment canceled out nearly one-third of the CO2 emissions caused by economic growth. 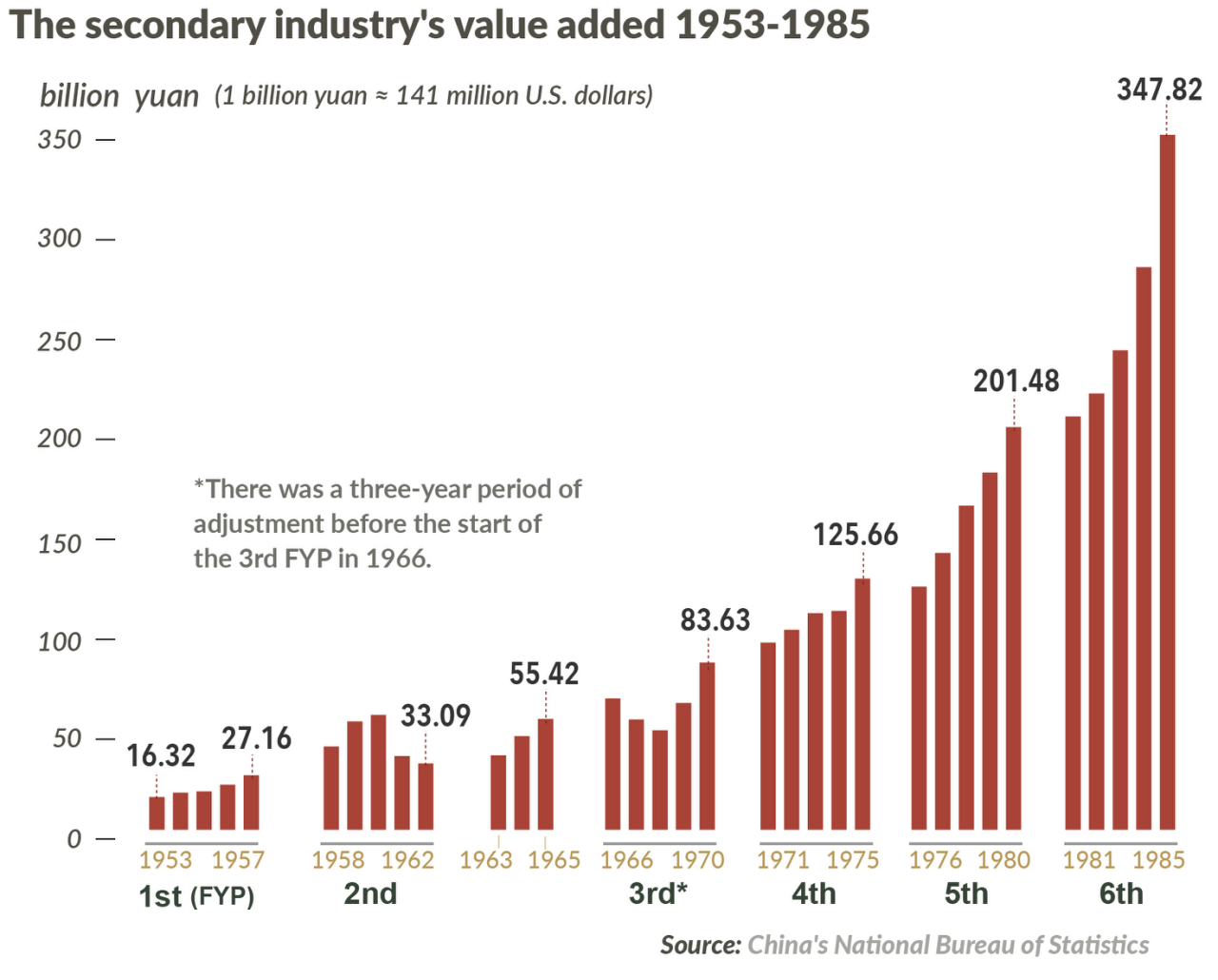 The world's second-largest economy has witnessed rapid income and consumption growth in rural areas over the past 70 years, with rural per capita disposable income in 2018 skyrocketing 40 times from 1949 to settle at 14,617 yuan (about 2,088 U.S. dollars) in real terms after deducting price factors, going up 5.5 percent on average on a yearly basis.

But the unbalanced economic development between China's urban and rural areas still exists. As a pillar industry in rural areas, the proportion of agriculture in GDP has been declining year by year. Compared with the growth rate of secondary and tertiary industries, agricultural development is slow, and the quality needs to be improved. Although China's rural per capita net income continues to increase, it is also accompanied by the phenomenon of the excessive urban-rural income gap.

In the 11th FYP, China, for the first time puts forward the idea of socialist new village construction and decided to let industry back feed agriculture and city support village so as to promote coordinated development between urban and rural areas. It also stressed the necessity to consolidate and strengthen the foundational status of agriculture.

During the period, China's 2,600-year-old agricultural tax was rescinded as of January 1, 2006. It represented another significant step taken by the country to relieve the financial burden on the country's 800 million farmers and an attempt to narrow the widening income gap between urban and rural households.

China's 13th FYP calls for "agriculture to be the foundation for building a moderately prosperous society in all aspects and to achieve modernization". This includes improving grain productivity to increase food security and promoting restructuring and modernization of the agriculture sector.

The country's urban-rural income gap was generally on the rise from reform and opening-up through 2010, however, starting 2010 or the last year of the 11th FYP, the ratio of per capita disposable income for urban residents to that of rural residents has been contracting remarkably, hitting 2.69 in 2018 and 0.64 lower than 1956.

In 2019, the real growth of per capita disposable income in rural areas was faster than that in urban areas, indicating narrowing of the urban-rural income gap, according to the National Bureau of Statistics.