Sam Cane: New captain of the legendary All Blacks
CGTN 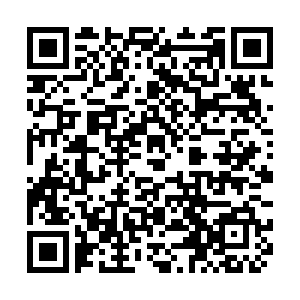 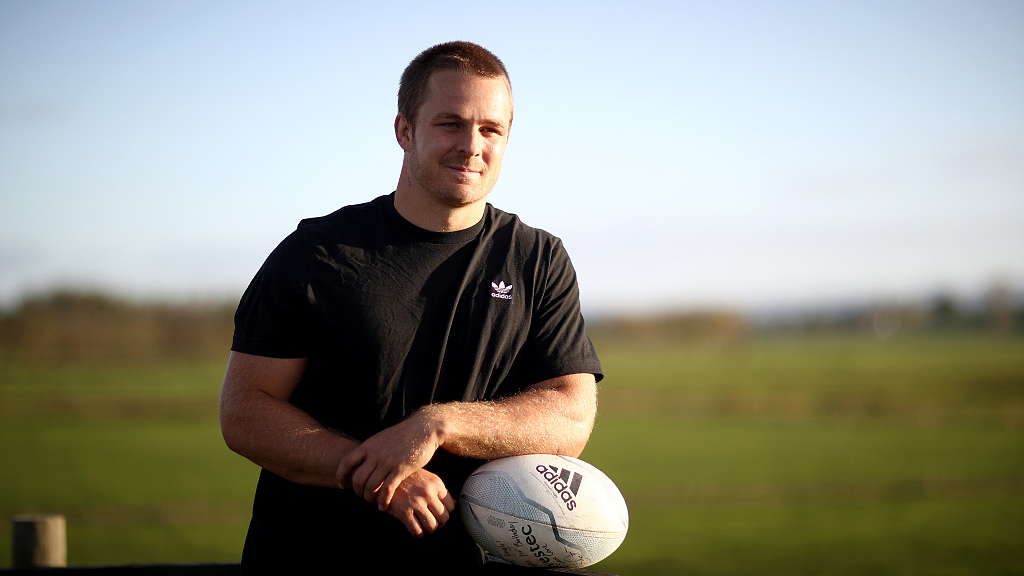 The All Blacks' newly named captain Sam Cane poses for a portrait at his home farm in Hamilton, New Zealand, May 6, 2020. /VCG

The All Blacks' newly named captain Sam Cane poses for a portrait at his home farm in Hamilton, New Zealand, May 6, 2020. /VCG

Sam Cane has been selected as the New Zealand All Blacks captain, succeeding Kieran Read, who retired after last year's Rugby World Cup.

New coach Ian Foster made the announcement late Tuesday, even though there is no indication when the All Blacks will play again because rugby has been shut down amid the COVID-19 pandemic.

The 28-year-old Cane has been a regular in the New Zealand No. 7 jersey since the retirement of Richie McCaw in 2015, appearing in more than 60 tests – international matches usually played between two senior national teams in rugby.

Cane made a remarkable recovery last year from a neck injury to resume his test career. He has played since without any obvious impediment, as a hardworking but unspectacular loose forward.

Cane has already captained the team on three occasions, according to the All Blacks' website.

Cane was the fifth youngest All Blacks captain when, at 23, he led New Zealand against Namibia in 2015. He also led the team against Italy in 2016 and against Argentina last year. 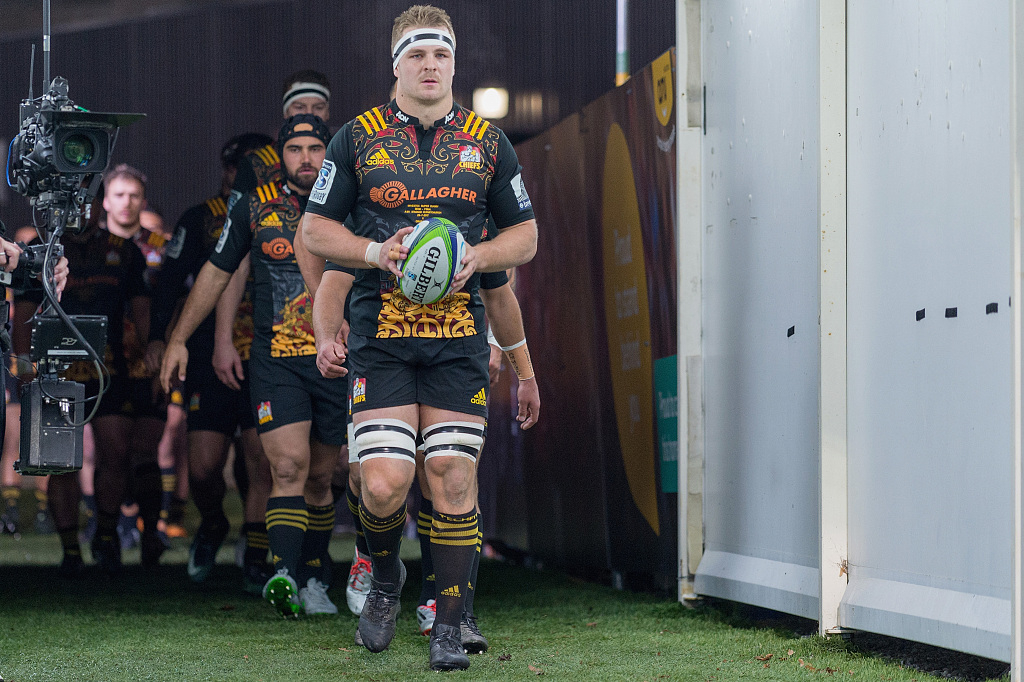 Sam Cane leads his teammates onto the field prior to the Super Rugby semifinal in Christchurch, New Zealand, July 29, 2017. /VCG

Sam Cane leads his teammates onto the field prior to the Super Rugby semifinal in Christchurch, New Zealand, July 29, 2017. /VCG

"It's a pretty exciting challenge really and as I've spent more time in the All Blacks and grown as a player, I've become a lot more comfortable being a leader in the team," Cane said on Tuesday.

"The great thing about the All Blacks is that the leadership group is full of captains and experienced players already, so I'm just really looking forward to working closely with that group and doing my best to lead them and the rest of the squad."

"My style as captain will be to not really change the way I do things. I'm just myself and will continue to be. I already work on building relationships, especially with the younger guys in the squad, and everyone else connected with the team, so that will continue," Cane added.

"While we don't know yet what the rest of the year looks like for the All Blacks, I'm looking forward to catching up with the coaches and other senior players as we firm up our plans." 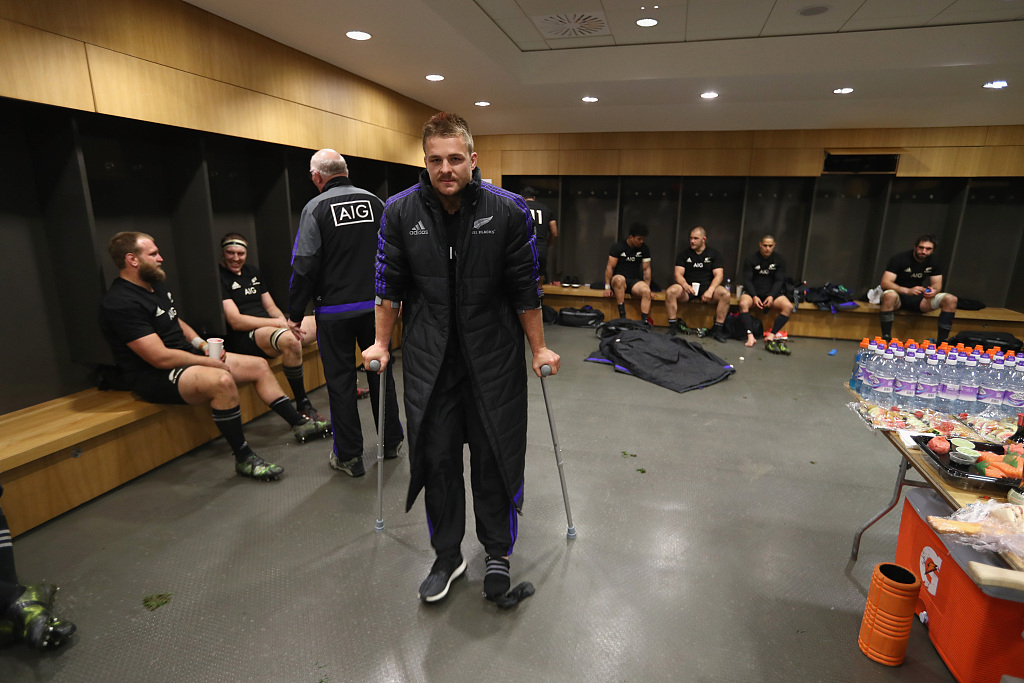 Sam Cane is on crutches in the dressing room following the international rugby match between Ireland and the New Zealand All Blacks in Dublin, Ireland, November 19, 2016. /VCG

Sam Cane is on crutches in the dressing room following the international rugby match between Ireland and the New Zealand All Blacks in Dublin, Ireland, November 19, 2016. /VCG

All Blacks head coach Ian Foster said he was delighted to name Cane as the new captain.

"We have some great leaders in our team and guys like Brodie Retallick and Sam Whitelock would be great captains, but it was about which person suited it. Sam's got the respect of the training shed. He works hard, he walks the talk, he's a straight shooter and he likes to think a lot about the game. He can annoy you at times, he comes and asks a lot of questions, but he challenges us, and I think that's exactly what we want out of an All Blacks captain," said Foster during "The Breakdown" on Sky Sports on Tuesday night.

"Sam is an experienced All Black with eight years in the team now and is a 'follow-me' type of leader and a very good thinker in the game. He has a natural ability to connect with everyone in the team and is straightforward and direct when he needs to be.

"There's massive respect for Sam among the players and management, and he's perfectly placed to lead the All Blacks into the future."

"But apart from the All Blacks, I'm excited about hopefully seeing some Super Rugby soon. On our leadership calls you can sense the excitement from the players, and they want to play."

Cane will undoubtedly feel the weight of history as he takes up the role. Here are four of the greatest captains who helped forge the legacy of the All Blacks.

Gallaher led the All Black "Originals" tour to Europe and the U.S. in 1905, ensuring his place in the pantheon of New Zealand rugby greats despite his brief international career.

He was already 31 by then and there were complaints that he was too old to captain the team, the first to use the All Blacks name.

But his innovative tactics and rigorous training methods, which were unusual at the time, saw the New Zealanders win 34 of their 35 tour matches.

After returning home, he co-authored "The Complete Rugby Footballer," which served as a blueprint for New Zealand rugby coaches for generations.

Gallaher died in France in WWI and his grave has become a shrine for traveling Kiwis.

Even today, the All Blacks and France contest the Gallaher Trophy, the rugby ground at Letterkenny near his birthplace is named after him, and he has a statue outside Auckland's Eden Park. 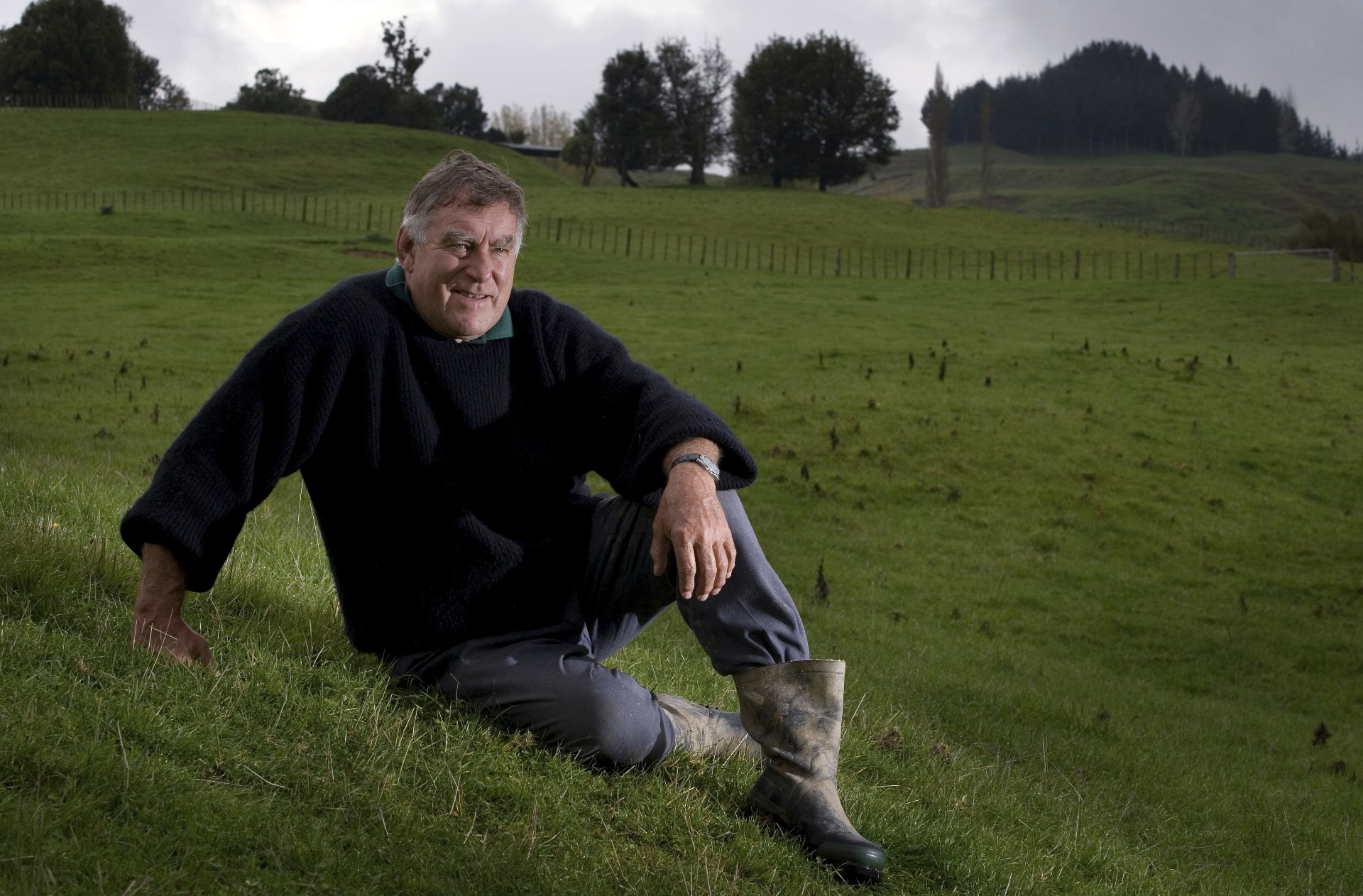 Former All Blacks great Colin Meads is pictured on his farm in Te Kuiti, New Zealand, May 27, 2006. Meads passed away at the age 81 after a year-long battle with cancer as his death was announced on August 20, 2017. /AP

Former All Blacks great Colin Meads is pictured on his farm in Te Kuiti, New Zealand, May 27, 2006. Meads passed away at the age 81 after a year-long battle with cancer as his death was announced on August 20, 2017. /AP

Towering lock Meads was a legendary hard man who helped give New Zealand rugby its edge.

While Meads captained New Zealand only four times, his 55 tests were a world record at the time and his constant presence in the team inspired teammates and intimidated opponents.

After suffering a broken arm during a tour match in South Africa in 1970, he completed the game then treated his injury with horse liniment, taking the field for a test soon after with a thin guard protecting his arm.

Meads' impact was acknowledged when he was named New Zealand's player of the century in 1999. 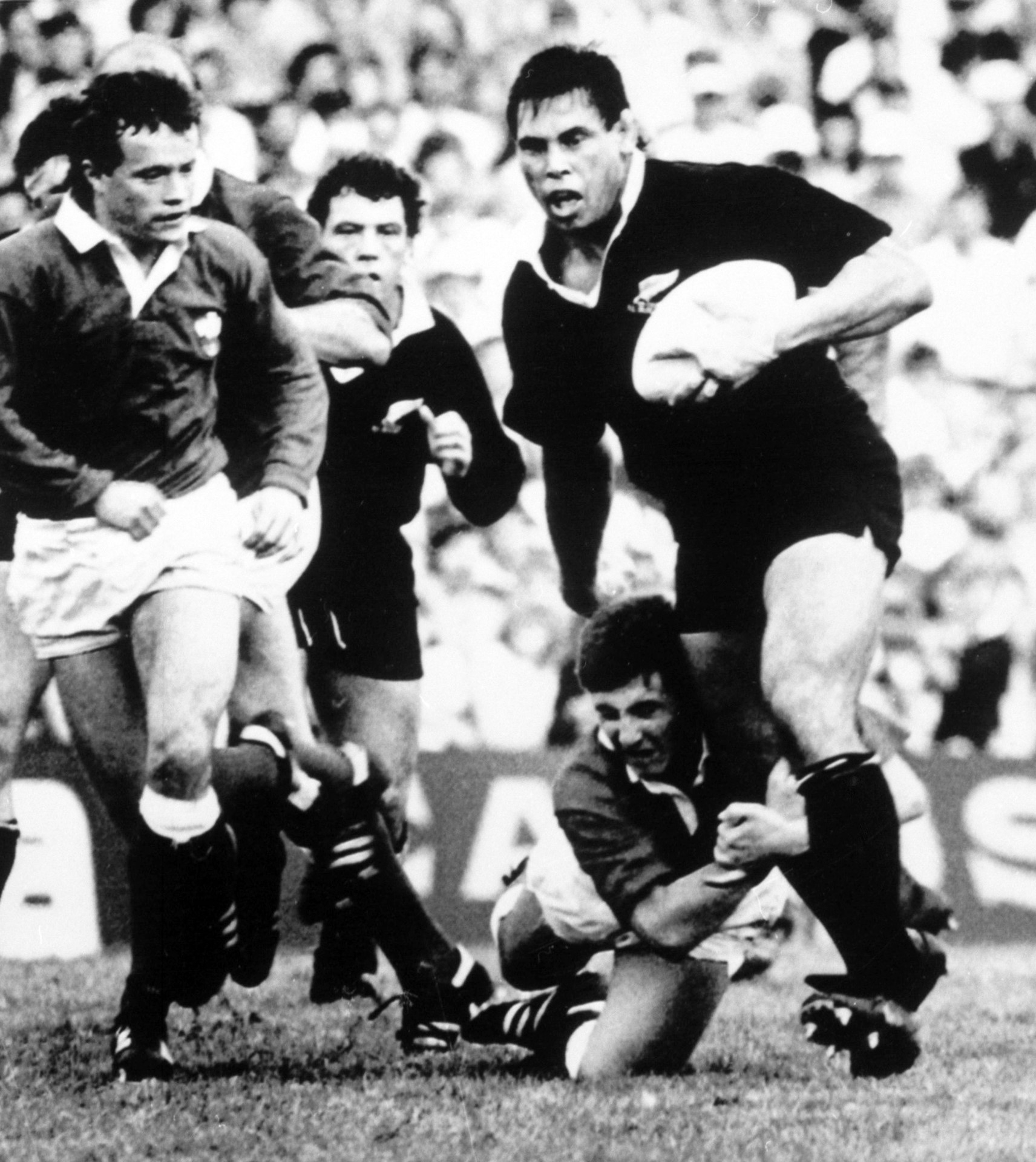 Wayne Shelford (R) of the All Blacks steps out of the tackle of Welsh flyhalf Jonathon Davies during the Rugby World Cup semifinal between New Zealand and Wales in Brisbane, Australia, June 14, 1987. /AP

Wayne Shelford (R) of the All Blacks steps out of the tackle of Welsh flyhalf Jonathon Davies during the Rugby World Cup semifinal between New Zealand and Wales in Brisbane, Australia, June 14, 1987. /AP

As the only All Blacks captain to remain undefeated during his time in charge, Shelford led the New Zealanders through one of their great periods of domination.

The No. 8 was part of the 1987 World Cup-winning side and took up the captaincy later that year, leading his side to 15 victories and one draw.

Fiercely proud of his Maori heritage, Shelford insisted his teammates treat the haka with proper respect, transforming it into the full-blooded, earth-shaking challenge we know today.

He entered All Blacks folklore after the 1986 "Battle of Nantes" against France, when he lost four teeth and suffered a large tear to his scrotum from a stray stud in the first half.

He insisted medics stitch up the wound on the sidelines, then launched himself back into the fray.

Controversially dropped in 1990, he was so popular with All Black fans that "Bring back Buck" signs appeared at matches for years afterward. 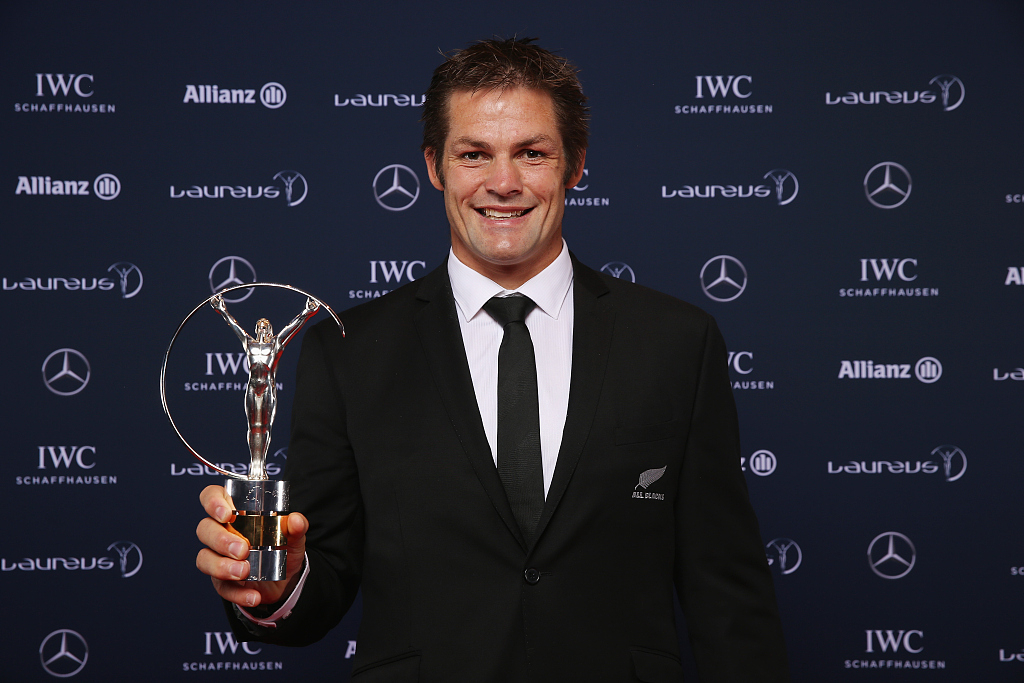 On behalf of his team the All Blacks, then captain Richie McCaw poses with the Laureus World Team of the Year trophy in Berlin, Germany, April 18, 2016. /VCG

On behalf of his team the All Blacks, then captain Richie McCaw poses with the Laureus World Team of the Year trophy in Berlin, Germany, April 18, 2016. /VCG

Modern great McCaw is widely acknowledged as the best player to ever pull on an All Black jersey.

A three-time world player of the year, he is the only captain to win the World Cup twice and remains rugby's most capped player, with 148 tests.

He led New Zealand to victory on home soil in the 2011 World Cup with a broken foot, ending a 26-year tournament drought to seal his place in Kiwi affections.

McCaw was renowned as a master of the flanker's dark arts, insisting he was simply playing on the edge while opponents such as Springbok Victor Matfield complained he "got away with murder."