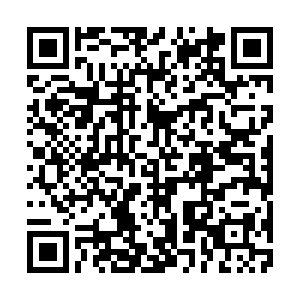 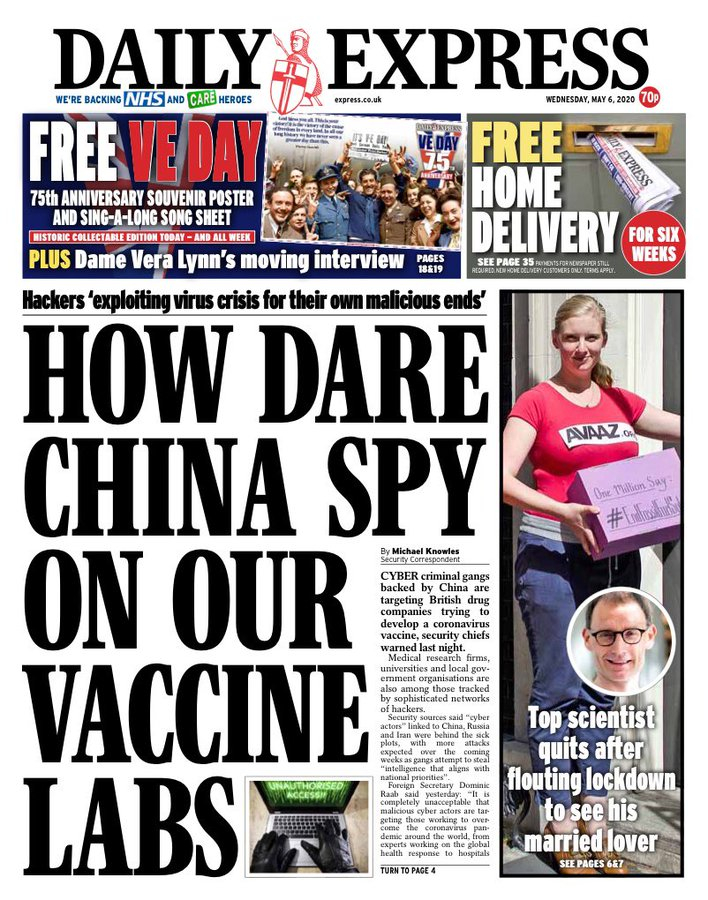 Screenshot of the headline of the British newspaper The Daily Express, May 6, 2020.

Screenshot of the headline of the British newspaper The Daily Express, May 6, 2020.

On the morning of May 6, the British tabloid the Daily Express led with vilifying accusations against China accusing Beijing of conducting industrial and scientific espionage against British efforts to develop a vaccine for the COVID-19.

The headline by the newspaper reads "HOW DARE CHINA SPY ON OUR VACCINE LABS" – detailing that "sophisticated networks of hackers" are targeting British medical research companies, universities and local governments in the pursuit of the antidote.

This is utter nonsense. The Daily Express is a populist right-wing newspaper which has a long history of peddling baseless conspiracy theories and thrives on an audience of distrusting older voters. Given the political climate in the United Kingdom, that it would take this line is not surprising. However, more importantly is that there are empirical grounds for such accusations.

China is not reliant on British research for the vaccine, with its own companies in fact leading the world (with more time) on clinical trials. In doing so, this article aims to deprive China of its own success and peddle popular sinophobic talking points that Chinese lean towards theft and distrustful behavior.

The Daily Express is a right-wing leaning newspaper in the United Kingdom with a circulation of about 300,000 a day. 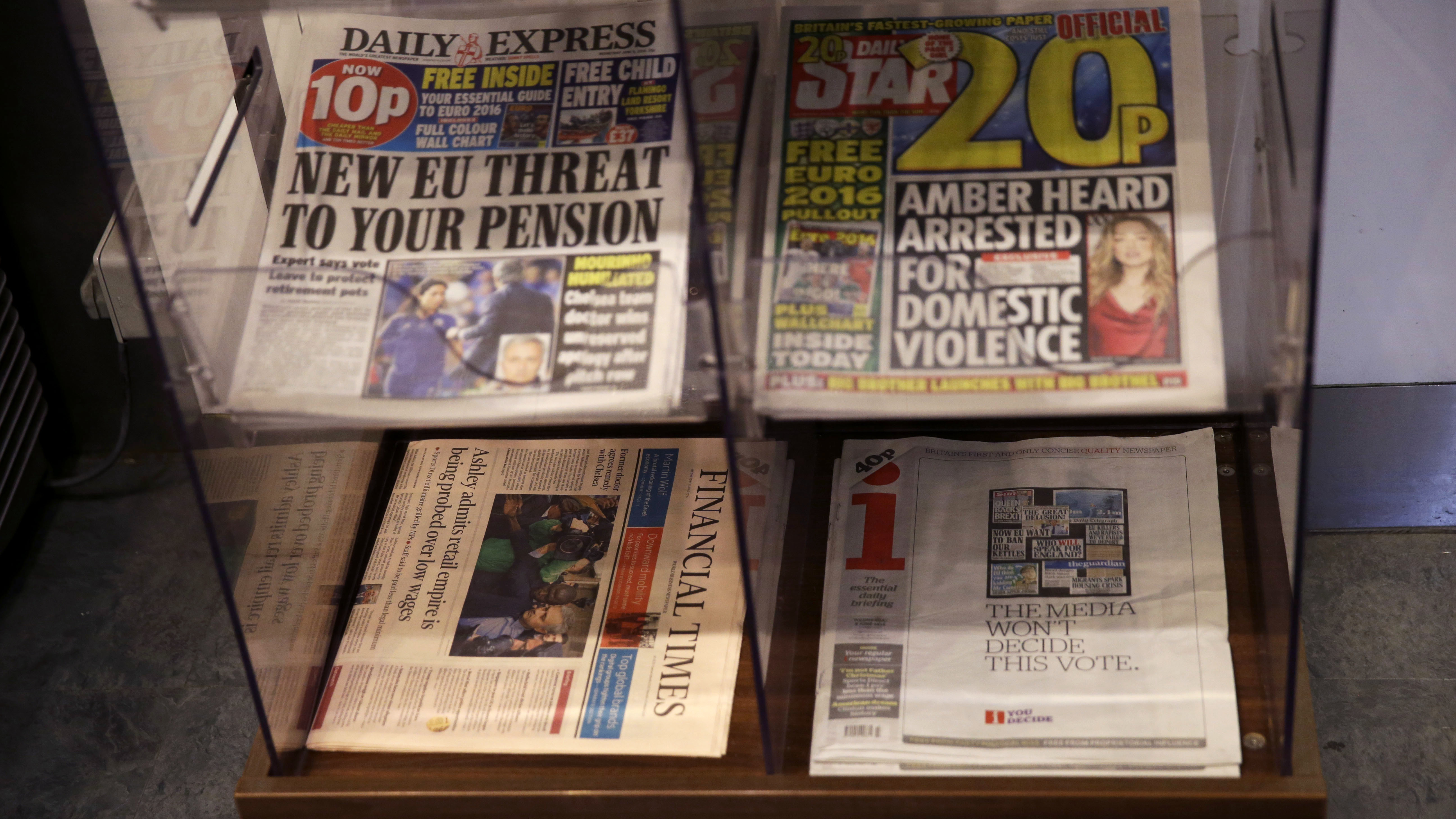 Whilst it is less aggressive than the Daily Mail in its content, it nevertheless leans towards promoting right wing populist talking points and indirect conspiracy theories with the endeavor to reach an audience less trustworthy of the British establishment (in contrast to the Mail as a Conservative Party mouthpiece.

Examples of conspiracy toned reporting promoted by the Daily Express have included an endless focus on the former Princess Diana of Wales who died in a car accident in 1997 and the toddler Madeline McCann who disappeared without explanation in Portugal in 2003.

In doing so, the express is a strident supporter of Euroscepticism and supported Brexit long before the mainstream conservative papers were willing to do so, encapsulated by its endorsement of UKIP in 2015.

On this background, it is no surprise that the paper is now pushing explicit allegations against China on the matter of industrial espionage, aiming to capitalize on public anger derived from the COVID-19 in the United Kingdom, whereby the death toll has continued to rise and overtake other countries in Europe.

In doing so, it also aims to champion British nationalism in a race to promoting the COVID-19 vaccine and portray China in adversarial terms.

Of course, is there any evidence that China has indeed engaged in industrial espionage against the United Kingdom on this matter? The logic seems bizarre. Having been hit with the COVID-19 epidemic prior to other countries and suffered a major outbreak, China has subsequently been ahead of the West in the development of a vaccine.

For example, as the New York Times is even forced to concede: "By some measures, it is winning the race, with four companies already testing their vaccine candidates on humans." For example, Tianjin's CanSino Biologics was the first company in the world to enter Stage-2 clinical trials for the vaccine, with the Wuhan institute of biological products also following.

Whilst scientists at Oxford University have indeed made good progress on a potential vaccine, nevertheless China is ahead. Research on the virus and its strains have also been published publicly in journals by British scientists from leading universities.

Therefore, why in any dimension would China need to pursue industrial espionage concerning a vaccine? It is ahead itself, and also has access to publicly available knowledge. This makes no sense. Therefore, the Daily Express is using this groundless and bizarre set of claims to pursue further distrust, vilification and indignation against Beijing whilst also championing Britain's achievement.

Sinophobic discourse in English language culture has for centuries promoted the idea of Chinese people as inherently dishonest, brutal and unethical in their pursuit of business, a set of claims which has also been utilized to generate the broader exaggerations and narratives of technology theft within the United States.

Therefore to conclude, this report has very little substance. It wants to make British people believe that China is not capable of any success of its own and is siphoning off British science for its own gain in a malign way, adding further fuel to anti-China debates circulating in the United Kingdom from the political right.

However, it is not true and the logic of the argument subsequently collapses when one notes China's own vaccine achievements are considerably ahead of Britain's, and that the UK's own research on the COVID-19 is largely in the public domain.

In this case, the paper is pursuing its usual modus operandi of pushing populist conspiracy leaning reporting.