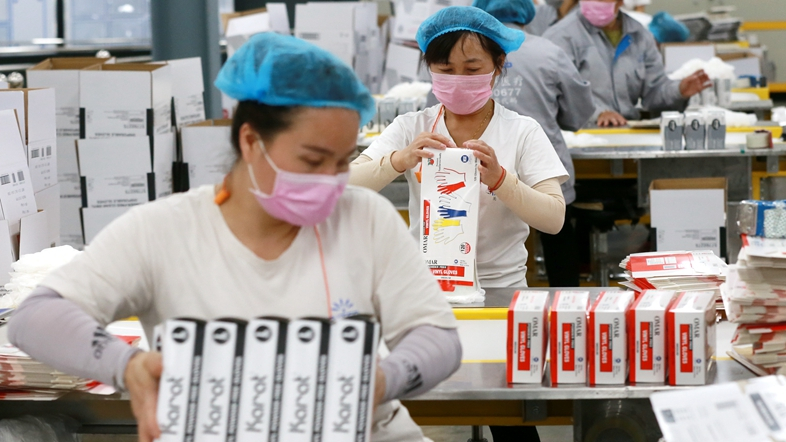 China has never limited the exports of medical supplies, nor stored a large amount of them, said Gao Feng, spokesman for Chinese Commerce Ministry, at today's press briefing.

Gao said that the channel for exporting medical products is unimpeded. China didn't allow the exports of those products that don't meet the standards of China, or of the receiving countries, but the channels of exporting qualified ones is unblocked.

Since the end of March, Beijing has published two notices on ensuring the quality of medical supply exports. It has put both medical-purposes masks and non-medical purpose ones, and other medical products under oversight.

Meanwhile, the Commerce Ministry says the consumption market showed an obvious recovery. It released consumption figures covering the just finished five-day Labor Day holiday. The daily average retail sales among key retail companies, went down by 6.7 percent from a year ago, but increased by 32 percent over the last three-day holiday, Tomb-Sweeping Day, a month ago.

During the Labor Day holiday, on-line sales saw a rapid growth. More than 100 e-commerce companies held promotions during the holiday, and the sales of some of the major ones went up by more than 30 percent from a year ago. The sales of food and beverages, and the accommodation industries, climbed by 20 and 15 percent respectively, compared with the last Tomb-Sweeping Day holiday. The sales of many everyday items also rebounded quickly and topped figures from the Tomb-Sweeping Day holiday. Household electricity appliances were up 70 percent, articles for daily use up 54 percent, cosmetics gained by 40 percent and clothing sales rose by 30 percent.