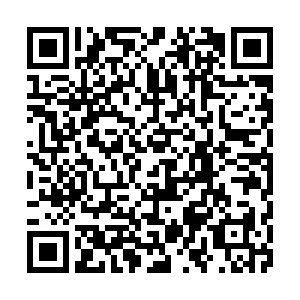 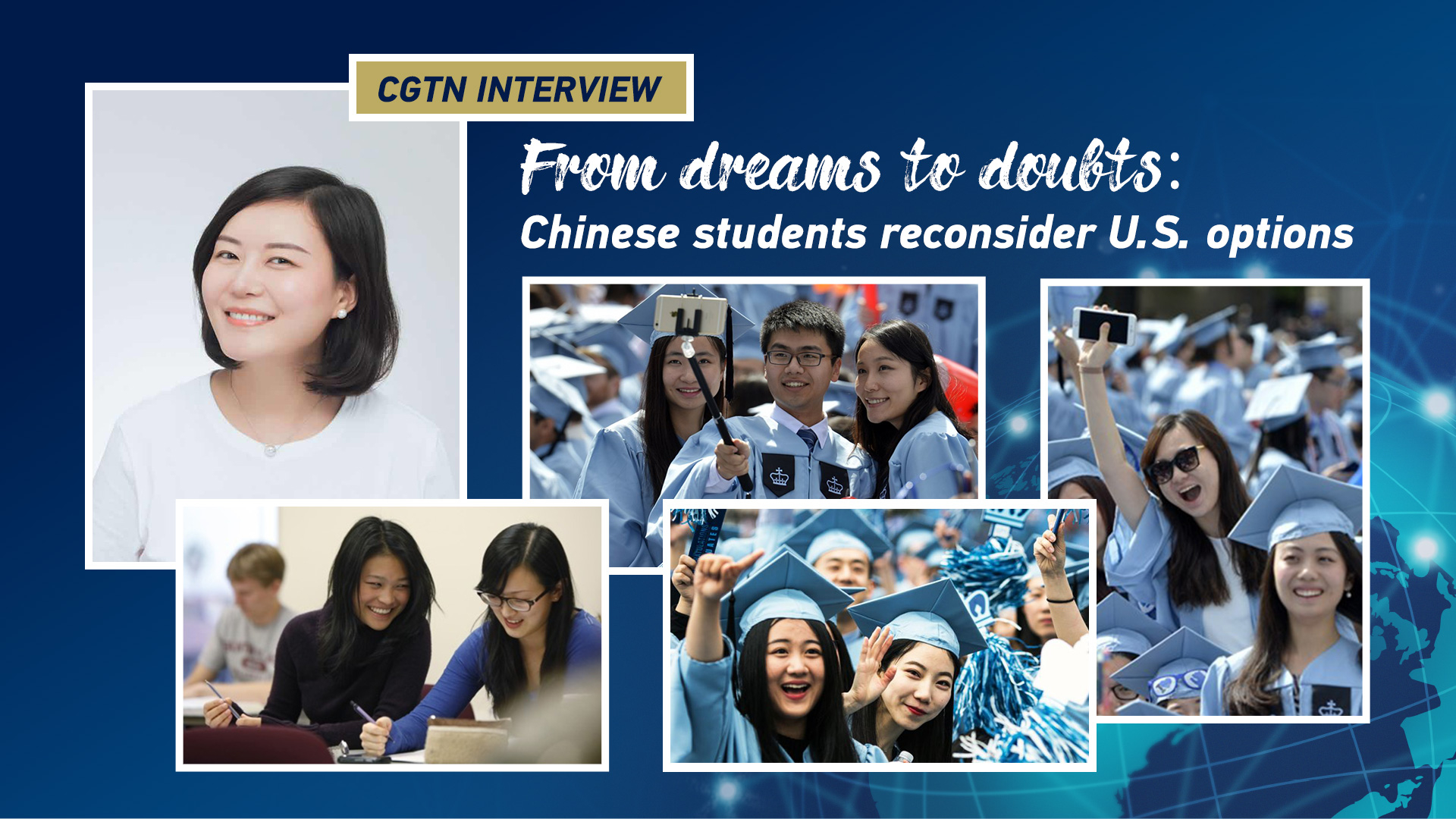 The COVID-19 pandemic is adversely affecting the appetite for much sought-after U.S. degrees among Chinese students, who were already "reconsidering" and "diversifying" their academic choices in the face of a barrage of hurdles raised by Trump administration's "unpredictable policies" in the past two years, according to recent reports.

The pandemic will lead to a decline in Chinese demand for U.S. education in the 2020-21 academic year resulting in an estimated revenue loss of 15 billion U.S. dollars for American universities, according to a U.S. congressional report on the cascading economic impacts of the outbreak published last month by the U.S.-China Economic and Security Review Commission.

"In the short term, there will be different impact for students and families in different age groups," Liheng Bai, the founder and director of college counseling at Inspire! Education China told CGTN Digital in a Skype interview from Dallas, Texas, U.S.

"I already heard from some parents and from friends who work in the U.S. boarding school industry, telling me they declined admission offers in the U.S. and decided to opt for an international school or international program in China," said Bai, who has been running the Shanghai- and Dallas-based education counseling and consulting firm for over a decade, helping Chinese students with admissions in foreign colleges, particularly in the U.S.

The U.S. higher education sector will also be hard hit, according to the congressional report, with U.S. universities increasingly dependent on tuition from Chinese students. According to the Institute of International Education, China has remained the largest source of international students for 10 years running, with 369,548 Chinese students enrolled in U.S. higher education programs in 2018 and contributing 15 billion U.S. dollars in tuition payments. 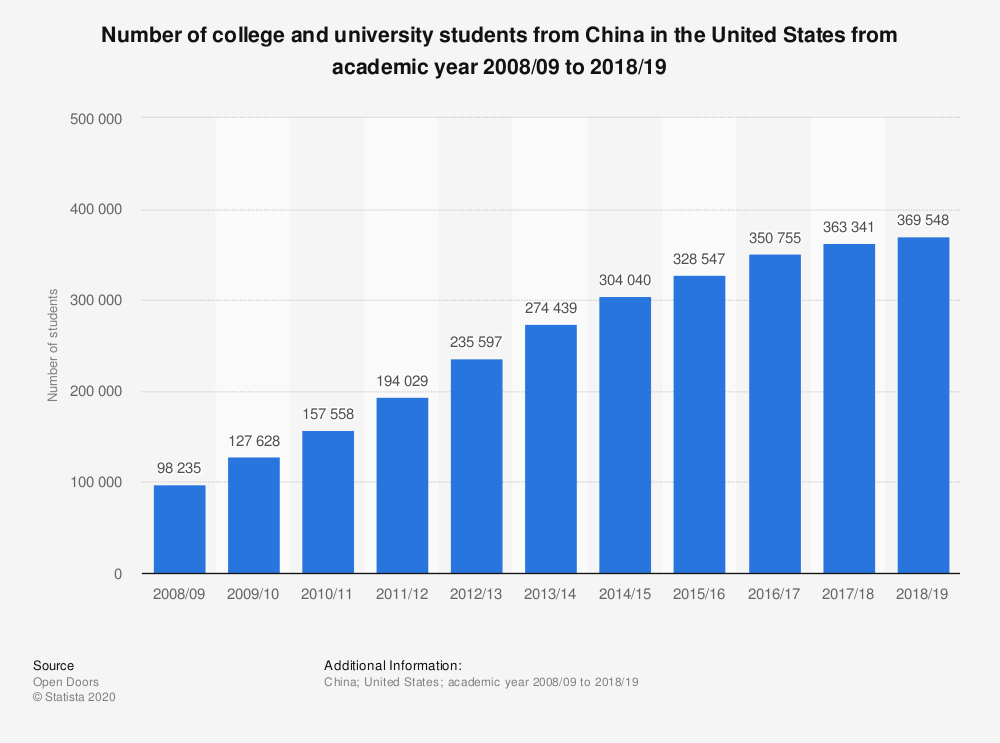 China has remained the largest source of international students for 10 years running, with 369,548 Chinese students enrolled in U.S. higher education programs in 2018. /Statista

China has remained the largest source of international students for 10 years running, with 369,548 Chinese students enrolled in U.S. higher education programs in 2018. /Statista

"Chinese students include undergraduate, graduate and masters, PhDs, and younger ones. For undergraduate students, they are about 37,000 to 40,000 students, every year going to the U.S. That's a huge tuition revenue. And plus, they spend money on different things. So, overall, I think it's a pretty big income and revenue for many U.S. universities," Bai explained.

The report said the postponement or cancellation of U.S. college entrance examinations in China, indefinite travel restrictions and continued uncertainty surrounding when U.S. college campuses will reopen are expected to reduce Chinese demand for U.S. higher education in the 2020-2021 academic year.

She added that the biggest decline could be seen among the students pursuing science, technology, engineering and mathematics (STEM) education. "For those fields, it's going to be tougher and has already been challenging in the past two to three years. I can already see the decline."

University administrators were cited in the congressional report saying that canceled recruitment events in China and inability to work with local recruitment agencies could further depress Chinese student enrollment in U.S. university programs.

'All eggs in one basket, no more'

Meanwhile, an Amherst College survey of education counselors in China revealed that an overwhelming number of Chinese students and parents were reconsidering their plans of pursuing education in the U.S. and diversifying their options to other destinations.

About 85 percent of respondents said the Trump administration's "unpredictable policies" toward Chinese students were the biggest concern for Chinese parents. Safety concerns (78 percent), uncertainty over post-graduate work experience (65 percent) and fear of visa denial or deportation after arrival (65 percent) were the other key factors shaping their decisions.

"I agree that those are the major concerns of many parents and students. But I do think that for a small group of parents and families in China from the upper-middle class, who have a higher socioeconomic background, their top option remains the U.S. even with all the setbacks and challenges. That's my experience," Bai said.

She, however, noted that the recent incidents of racism against Chinese and Asians in the U.S. amid the COVID-19 outbreak has emerged as "a big concern for parents."

With the prevailing uncertainties in the U.S., Chinese students and families are increasingly getting drawn toward other education destinations, such as the U.K., Canada and Australia.

"Even before the COVID-19, for the past two years, we have already seen an increase of interest in the UK and Canada," said Bai, citing the China-U.S. trade issue and Trump's "tough foreign policy" as the reasons behind the change in Chinese students' approach.

"Earlier, our students only applied to the U.S. But in the past two to three years, the trend is to usually add some UK and Canadian schools in addition to the U.S. option so that they don't put all the eggs in one basket," she added.

While the U.S. education sector braces to face the impending fallout of COVID-19, Bai also expressed concern about the resulting impact on China's huge education market.

"I'm worried how the declining number [of Chinese students to the U.S.] will affect the education market in China. What about all the teachers, facilities and all the schools?" she said, referring to the resources and infrastructure China has built in recent years to support high-quality international education.

"In the past 10 years, China has witnessed an explosion of international schools and programs. There's been huge leap in test-prep and counseling sectors in recent years. The education industry creates thousands of jobs, and that's going to be challenging to sustain under the current situation," she said, adding that some firms are already closing down and sacking staff.

"The next six months to a year will be crucial. We're going to be very cautiously watching the situation," she said.

Bai asserted though that the education sector will spring back sooner than later owing to the emphasis Chinese parents pay to their children's education.