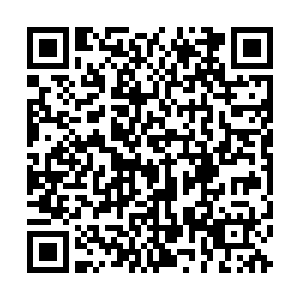 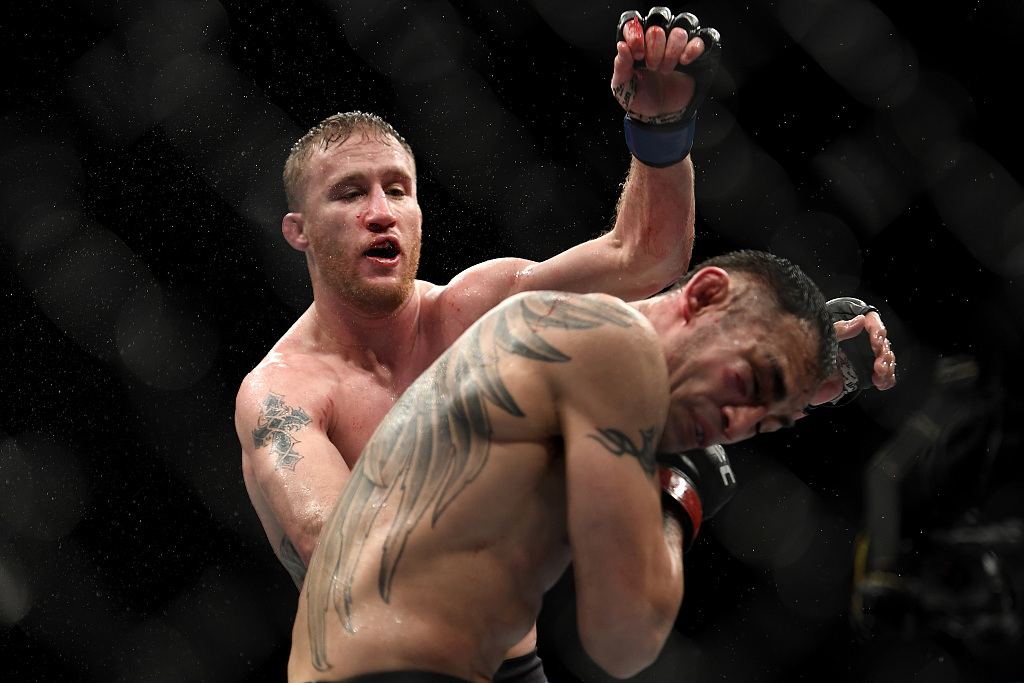 Justin Gaethje (L) of the U.S. fights Tony Ferguson of the U.S. in their Interim lightweight title fight during UFC 249 at VyStar Veterans Memorial Arena in Jacksonville, Florida, May 9, 2020. /VCG

Justin Gaethje (L) of the U.S. fights Tony Ferguson of the U.S. in their Interim lightweight title fight during UFC 249 at VyStar Veterans Memorial Arena in Jacksonville, Florida, May 9, 2020. /VCG

Even without lightweight champion Khabib "The Eagle" Nurmagomedov, Ultimate Fighting Championship (UFC) 249 was finally three weeks late and held behind closed doors in Jacksonville, Florida, on May 9 .

To the surprise of many MMA fans, main event substitute Justin Gaethje beat Tony Ferguson with just 1:20 remaining in the fight. El Cucuy's supporters may have felt heart-broken as their hero's face was covered with blood which was leaking from two large gashes left on his face. Ferguson had never been finished like this before and his performance suggested that, also for the first time, he came to the Octagon unprepared.

This shock result has put a dampener on the prospect of the dream fight between the 36-year-old and "The Eagle". That bout had been made and cancelled five times, and now seems like it will never happen - at least not with the same stakes.

"The Highlight" Gaethje just had a month to prepare after Khbib withdrew due to Russia's closing its borders due to the COVID-19 pandemic. Many expected Ferguson's striking variety and incredible cardio to be too much for Gaethje. Instead, he controlled the distance well and outboxed his rival with heavy punches to win the Interim Lightweight Championship. By the third round, it seemed as if he was far hungrier than Tony and looking to prove himself at this unique event, and as he delivered more damage, grew into the occasion. Once considered a brawler, Gaethje showed he is now a genuine contender.

In the co-main event for the UFC Bantamweight Championship, "Triple C" Henry Cejudo scored a TKO in the second round over Dominick Cruz, who was returning to the Octagon after over three years away. 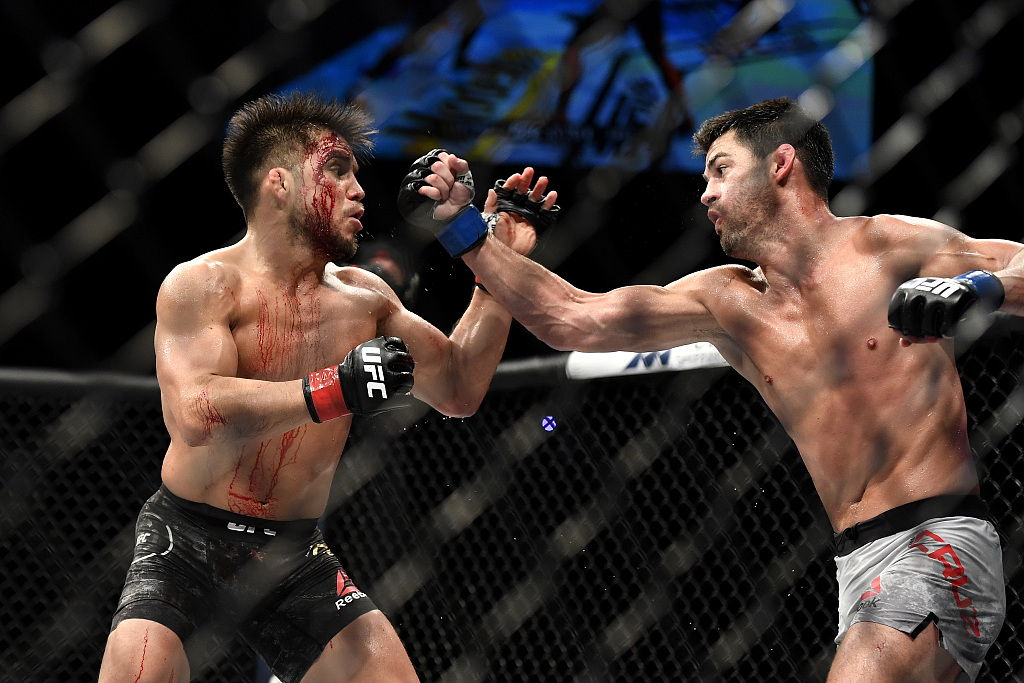 Henry Cejudo (L) of the U.S. fights Dominick Cruz of the U.S. in their bantamweight title fight during UFC 249 at VyStar Veterans Memorial Arena in Jacksonville, Florida, May 9, 2020. /VCG

Henry Cejudo (L) of the U.S. fights Dominick Cruz of the U.S. in their bantamweight title fight during UFC 249 at VyStar Veterans Memorial Arena in Jacksonville, Florida, May 9, 2020. /VCG

Cruz looked as if he hadn't missed a step and returned to his old ways of peppering his opponent with awkward strike from strange angles; early on, he hit Cejudo several times with diagonal uppercuts from an almost crouching position. Cejudo, however, had perfectly game-planned for the taller man and chopped him down with hard leg kicks before utilizing his grappling to prevent Cruz' level changes and pin him to the mat, making him open for strikes.

In the second round, it seemed like Cruz was finding his range and landed several good strikes, only to ultimately find himself on the receiving end of a hard knee, a flush straight punch on the floor and then (according to UFC commentator Joe Rogan) 11 unanswered left hands with only two seconds remaining. The referee called for a TKO, and just as with his UFC Flyweight Championship bout against TJ Dillashaw, Cejudo's opponent was immediately up on his feet and complaining about the decision. On one hand, Cruz had a point: he was getting back to his feet. On the other, he had taken two hard hits and had nothing in response suggesting he could have been flash KO'd.

And then, surprising everybody, after the match, the UFC Flyweight & Bantamweight Champion and Beijing 2008 Olympic freestyle wrestling gold medalist Henry Cejudo announced his retirement at the ripe old age of 33. That leaves two divisions without champions and Dominick Cruz with a lot of thinking to do.

Earlier, Francis Ngannou destroyed Jairzinho Rozenstruik with 10 punches in 20 seconds of round 1 for his fourth consecutive KO in the heavyweight division and Calvin Kattar smashed "Lil Heathen" Jeremy Stephens with a short elbow and some fierce ground and pound. Also, to open the card, Greg Hardy continued to slump his way through his MMA career with a tedious and unspectacular unanimous decision win over Yorgan de Castro; Hardy, a former defensive end in the NFL with the Dallas Cowboys forced into retirement after assaulting his girlfriend, was once considered a prospect in the heavyweight division but now, even with six wins and two losses, he looks stiff and plodding and unlikely to pose a threat to any fighter in the division's middle and upper echelons.

From the ESPN prelims: