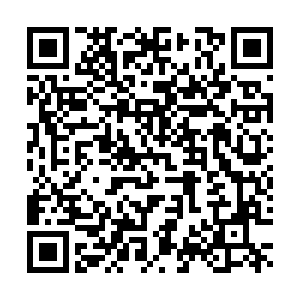 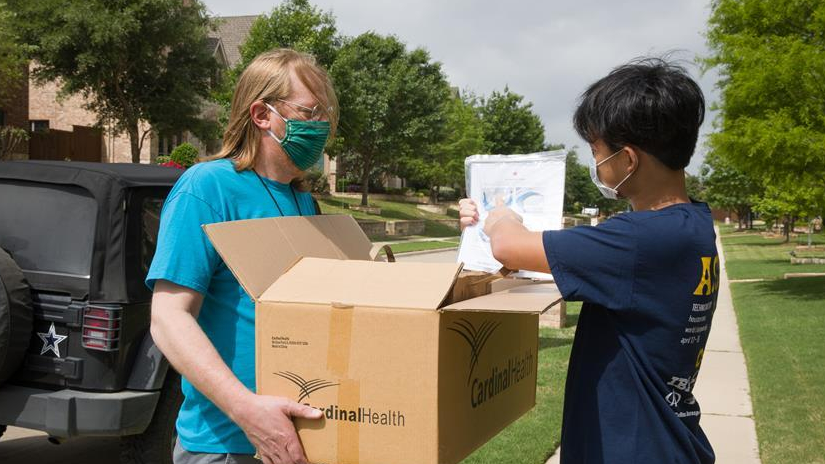 "The project started in the middle of March after spring holiday," Fang Wang, coach of the high school robotics team Technicbots, told Xinhua during a recent telephone interview.

It was Technicbots that initiated the 3D printing personal protective equipment (PPE) for local health workers. Founded in 2009 in Plano, a city in the state of Texas, the team has taken part in many contests organized by For Inspiration and Recognition of Science and Technology (FIRST), an international youth organization.

Noticing PPE shortages for frontline medical workers since the outbreak of COVID-19, many American Chinese groups in Texas have organized various donations and also encouraged the 10 American Chinese students with Technicbots to make their own contributions.

"We noticed that companies from the U.S. and Czech Republic have released models of 3D printing PPE and we used them as our original models," Wang said, explaining that 3D printing is the technology the team has been using in the past years.

The team focused on two kinds of PPE products: the face shield that can protect health workers when treating patients, and the ear guard that reduces the pain on ears when wearing masks for a long time.

After finishing a few samples, the team contacted clinics in need for testing and got the feedback before modifying the models. "It took a few weeks to finalize the models after doctors and nurses were absolutely satisfied with the products," said Wang.

With an aim to apply their robotic knowledge and skills to work, Technicbots has done numerous volunteer work such as summer camps to introduce robotics to more students. However, using the skills to actually help the community was new to the teenagers.

"When hosting camps we would have months to prepare the curriculum and we would only have to meet once a week to get things done. But since the situation is different, we really had to work together to meet every day and things are really more urgent than some of the other volunteer work," team member Austin Liu told Xinhua. 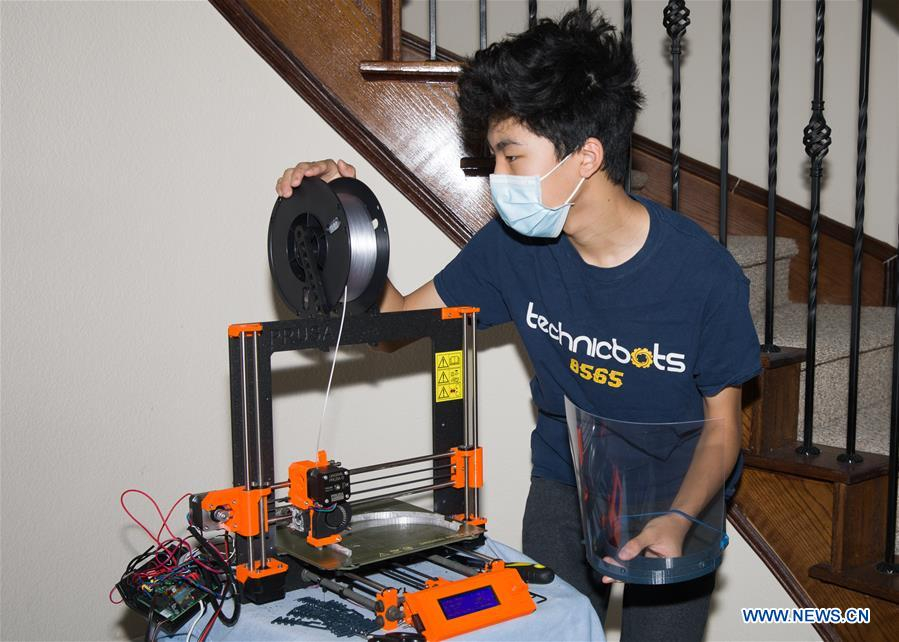 Max Fan, a member of high school robotics team Technicbots, uses his 3D printer to print out a face shield at home in Plano, Texas, the U.S., April 28, 2020. /Xinhua

Max Fan, a member of high school robotics team Technicbots, uses his 3D printer to print out a face shield at home in Plano, Texas, the U.S., April 28, 2020. /Xinhua

Building a production line was not an easy task, especially at this time. Unable to meet in person, students and their coach have virtual meetings every afternoon, reporting progress and assigning new tasks. Suddenly, their homes are transformed into factories, warehouses and meeting rooms.

Working under time pressure and communicating with different groups made the process quite stressful at first, but the students quickly adjusted themselves and overcome the difficulties.

"The rhythm was so quick," said team member John Dunbar. "But I think by now everything falls into place."

According to team member Melody Hu, in order to be more efficient, the 10 team members were divided into nine groups. From making and assembling to sanitizing and packaging, from request processing to material researching, the whole production line was run by students themselves supervised by their coach and parents.

So far, the team has delivered nearly 600 face shields and around 1,300 ear guards to 20 different hospitals and clinics, receiving positive responses from medical workers.

"This is a truly gift that will help our staff that are treating patients. It's a great thing for us to have," said Aaron Goodwin from North Central Texas Community Health Care Center when picking up the equipment.

Receiving more and more orders, the team is now working with four other robotic teams and a professor from the University of Texas. "To sustain these efforts, we recently started a fundraising and so far we have raised 4,415 dollars," Hu added.

The students have grown in all aspects through this process. "One way this experience has impacted me is that I learnt how to work with other people," team member Audrey He said. "Aside from collaborating with other robotics teams, we're also learning how to communicate with medical workers."

Team member Byron Li said his organization skills have improved. "When I was doing robotics work, I usually went where I was told to go. But now I have learned organizing myself and it's going to help me learn more by holding the leadership process," said the teenage boy.

Applying what they have learned to serve the community also gives students an unprecedented sense of pride.

"This volunteer work has given me a bit more responsibility because we know that we're doing this to help people in the medical field to save lives," team member Max Fan said. "I'm proud of myself."