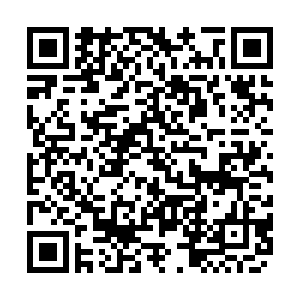 Teeming with pedestrians and commuters on horses, rickshaws and palanquins, a city gate is bustling with life. After entering the city and walking around downtown, a bazaar unfolds before your eyes, where antiques, art-ware and other assorted items are being sold while strollers pace up and down to appreciate the items and bargain with traders.

Around the corner, dressed in traditional Qing-style winter clothes with a queue hairstyle, some are waiting for their food at the tables laid down by street vendors. Some are teasing dogs, while others are seen greeting their acquaintances with a traditional bow.

Miles away, a temple is crammed full of people coming over to burn incense to worship and pray.

The AI-restored color footage shows people in Beijing dressed in traditional Qing-style clothes with queue hairstyle waiting for their food at tables laid down by street vendors. /bilibili.com

The AI-restored color footage shows people in Beijing dressed in traditional Qing-style clothes with queue hairstyle waiting for their food at tables laid down by street vendors. /bilibili.com

You might not find it difficult to identify those street scenes of old Beijing a century ago. Shot by a Canadian cameraman during the year of 1920 and 1929, a 14-minute-long black-and-white motion picture recorded how old Beijingers' life looked like then. This time, however, the hustle and bustle of the old city life is even more vividly presented as the old footage has been colorized and repaired by a modern Beijinger.

Hu Wengu, the restorer of the video, is a Chinese independent game producer currently based in New York. Touched by the original video he bumped into on YouTube, which was posted by People's Daily in 2016, Hu, a native Beijinger, decided to do the "time travel" by himself after being further inspired by the 4K high-definition restored color footage in 2019 of the historic founding ceremony of the People's Republic of China in 1949.

By virtue of the AI technology, Hu completed artificial colorization, restored frame rates and increased resolution based on the original footage, in seven days. 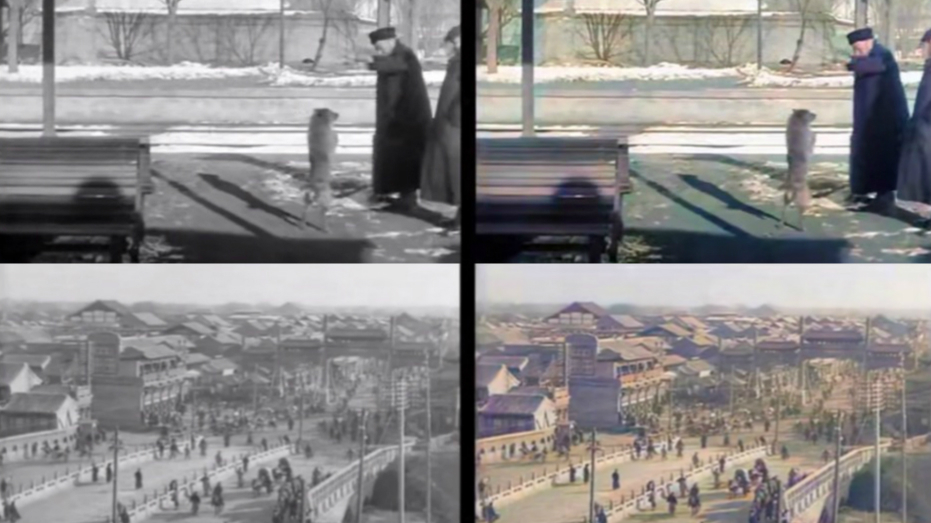 Frames of the original black-and-white motion picture of Beijing shot in 1920 and 1929, in contrast with the AI-restored colored footage. /bilibili.com

Frames of the original black-and-white motion picture of Beijing shot in 1920 and 1929, in contrast with the AI-restored colored footage. /bilibili.com

The restored video also included several frames where Hu put the original one together with the colorized one, making people easily spot the violent contrast between them, thanks to the magic of science and technology. Meanwhile, in order to give the audience a better taste of old Beijing over a century ago, the restorer also edited the sound effects of the video by embedding some elements of Beijing's folk music in it.

After Hu posted it on May 8 on his page "Dagu's Game Creation Hut" on Bilibili, one of the most popular video sharing websites focusing on animation, comics and games in China, the restored clip depicting Beijing's city landscape and people's lives during the late Qing Dynasty (1644-1911) went viral on China's social media platforms.

Distinct from any other old movie that audience could have expected, the once black-and-white footage amazed the viewers with prominent improvement in terms of color, clarity and sound effect. As of May 12, the clip has received nearly 1.4 million viewers with over 110 thousand likes and 21,000 shares. A slew of netizens also expressed their admiration and gratitude towards Hu for letting them "relive" the city life in Beijing in the 1900s.

The restored footage show two acquaintances bowing to each other to show respect in Beijing. /bilibili.com

The restored footage show two acquaintances bowing to each other to show respect in Beijing. /bilibili.com

"Born in 1918, the senior member of our family just passed away on May 1, 2020. If only he could linger on a few days, he could have seen the video clip," a netizen affectionately made a remark. One also commented that the Second Ring Road was then free of traffic jams while some other netizens marveled at the earth-shaking changes in China over the past century.

According to Hu Wengu, who had the original intention of promoting the AI technology, he never expected the video could become such a hit online. And while the artificial machine was "learning" to automatically recognize the colors on account of their darkness after going over the film for enough times, Hu himself had the chance to pick up the traditional culture and social conventions of Beijing.

However, there are some pitfalls to this method as well. According to Hu, he referenced YouTube blogger Denis Shiryaev's video restoration tutorial and the model applied in the AI restoration this time had been "learning" from old movies in foreign countries all the time, so the color filling was more like guided by the intuition "taught" by the existing pattern.

"But there should be richer colors of Beijing even a hundred years ago," said Hu. "So I am planning to renovate the model by 'teaching' it some old Chinese films so that next time something more of a China flavor would be savored by the viewers."