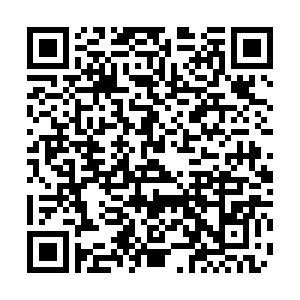 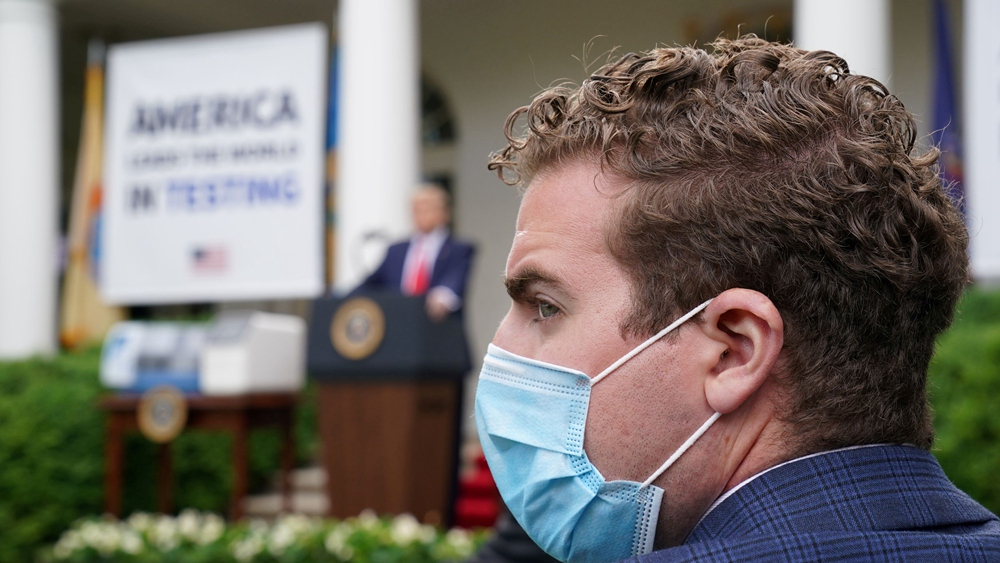 The White House has directed staff working in the West Wing, where the daily operations of President Donald Trump's administration are carried out, to wear masks except when they are at their own desks, two senior administration officials said on Monday.

With Trump's valet and Vice President Mike Pence's press secretary both testing positive for the deadly coronavirus last week, pressure is growing for the White House to take further steps in protecting the health of the 73-year-old president.

COVID-19: Wearing masks or not

ABC News first reported that the White House had informed its staff in a memo that everyone entering the West Wing would be required to wear a mask or facial covering. Unnecessary visits from other parts of the White House complex to the West Wing area, which includes the Oval Office and work space for senior advisers, was discouraged.

Trump has been resistant to wearing a mask himself and has not put one on in public, though he said he tried some on backstage during a visit to a mask factory in Arizona last week. 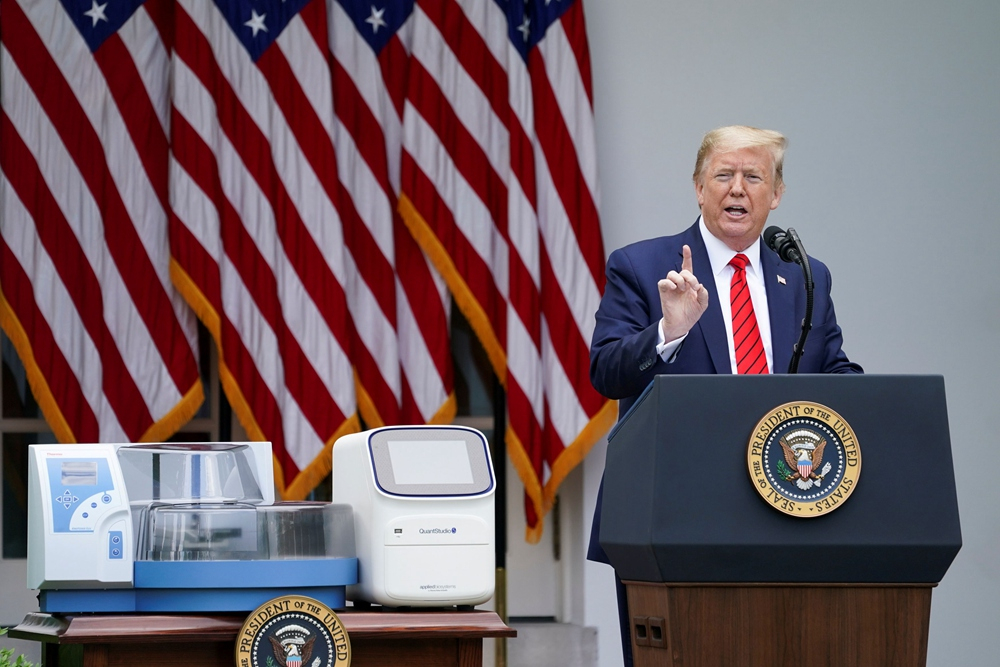 U.S. President Donald Trump stands next to coronavirus disease testing machines as he addresses a press briefing in the Rose Garden at the White House in Washington, U.S., May 11, 2020. /Reuters

U.S. President Donald Trump stands next to coronavirus disease testing machines as he addresses a press briefing in the Rose Garden at the White House in Washington, U.S., May 11, 2020. /Reuters

The president is in the age group that is considered high risk for complications with the coronavirus, which has killed tens of thousands of people in the United States alone and ravaged countries and economies worldwide.

The White House said last week it was stepping up precautions for people who are around Trump and Pence, both of whom have resumed travel outside of Washington. The two men are being tested for the virus daily and close associates are receiving tests on a daily basis as well.

"In addition to social distancing, daily temperature checks and symptom histories, hand sanitizer, and regular deep cleaning of all work spaces, every staff member in close proximity to the president and vice president is being tested daily for COVID-19 as well as any guests," White House spokesman Judd Deere said in a statement.

After Pence's spokeswoman, Katie Miller, tested positive for the virus last week, Trump was asked whether people in the West Wing would begin to wear masks. He responded that people already were doing so, but he and his guests that day had not donned masks, and staff in the West Wing were not wearing them either.

Miller is married to Stephen Miller, a senior White House aide and speechwriter for the president. 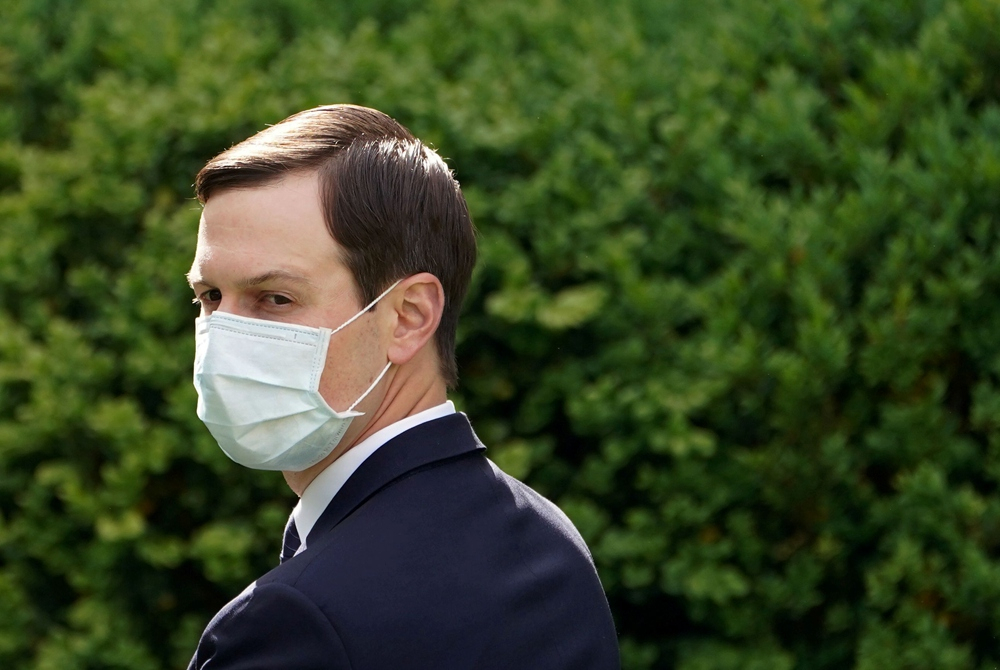 White House senior advisor to the president Jared Kushner wears a protective face mask in the Rose Garden as U.S. President Donald Trump holds a press briefing at the White House in Washington, U.S., May 11, 2020. /Reuters

White House senior advisor to the president Jared Kushner wears a protective face mask in the Rose Garden as U.S. President Donald Trump holds a press briefing at the White House in Washington, U.S., May 11, 2020. /Reuters

Trump on Monday dismissed concerns over the possible spread of coronavirus in the White House but said he may limit contact with Pence.

Trump, speaking to masked reporters in the White House Rose Garden, suggested that Pence was in quarantine after Katie Miller tested positive, though he did not say it outright.

Miller heads the White House's coronavirus task force. Three members of the task force have since gone into quarantine – infectious disease expert Anthony Fauci, Robert Redfield, director of the Centers for Disease Control and Prevention, and Stephen Hahn, head of the Food and Drug Administration.

A Pence spokesman denied over the weekend that the vice president was also in quarantine but Trump suggested he was when asked on Monday whether he had considered limiting his contact with him.

"I would say that he and I will be talking about that," Trump said at an occasionally testy press conference.

"During this quarantine period, we'll probably talk," Trump said. "I have not seen him since then."

"We can talk on the phone," he said of Pence. "He tested negative, so we have to understand that, but he comes into contact with a lot of people." 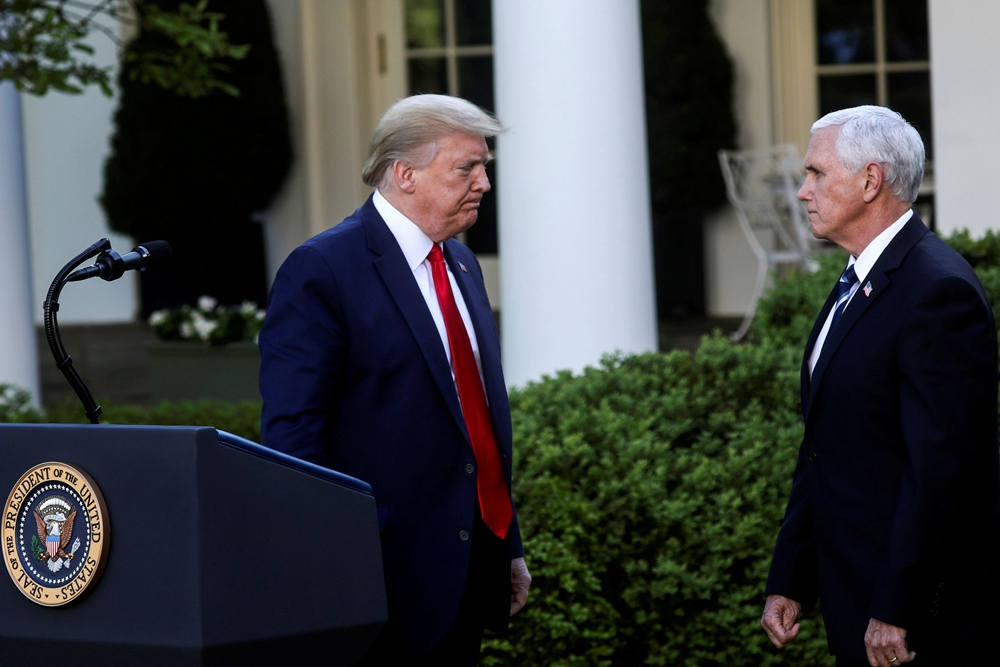 Trump sought to play down any concerns about an outbreak of the virus in the cramped quarters of the West Wing.

"Everybody coming into the president's office gets tested, and I've felt no vulnerability whatsoever," he said.

Trump, who is desperately seeking to reboot the economy ahead of the November election, said the U.S. was making "tremendous strides" in ramping up testing and the number of virus infections is "coming down very rapidly."

He said it was essential to get the country reopened. "The people want our country open," the president said.

"Some states could be moving more quickly," he said. "People are dying in the lockdown position too."

Trump abruptly ended the press conference after an exchange with a CBS News reporter who asked him why when Americans were losing their lives did he keep insisting that the U.S. was doing better than other countries when it came to testing. 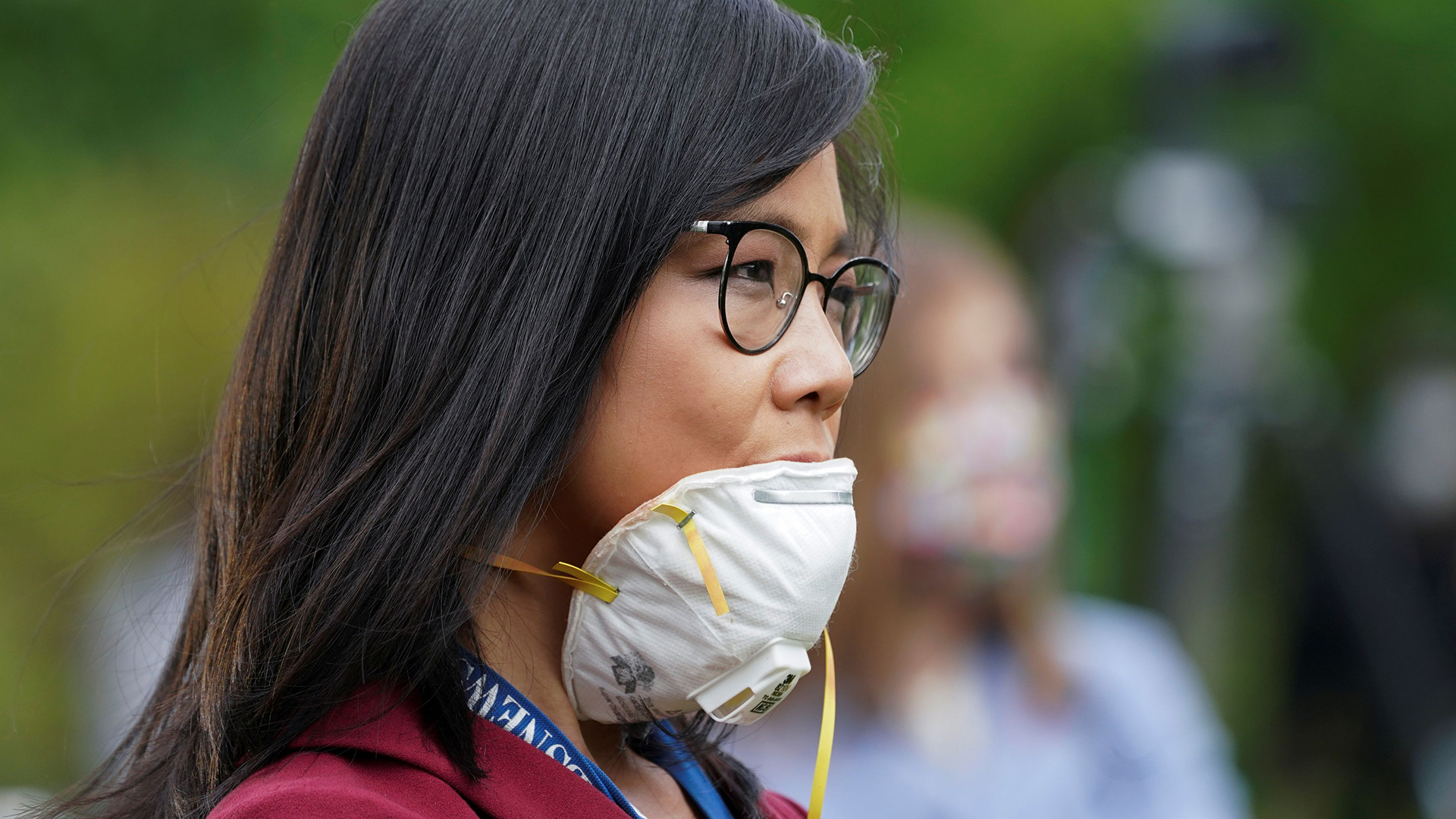 "Well, they're losing their lives everywhere in the world," Trump said. "And maybe that's a question you should ask China. Don't ask me, ask China that question, OK?"

The CBS reporter, Weijia Jiang, who is of Chinese-American origin, then asked Trump, "Sir, why are you saying that to me specifically?"

"I'm telling. I'm saying it to anybody who would ask a nasty question like that," Trump replied before abruptly ending the press conference.

The United States is leading the world in both COVID-19 infections and fatalities, totaling more than 1.3 million and over 80,000 respectively.