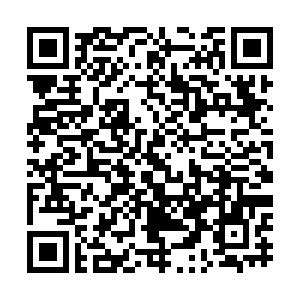 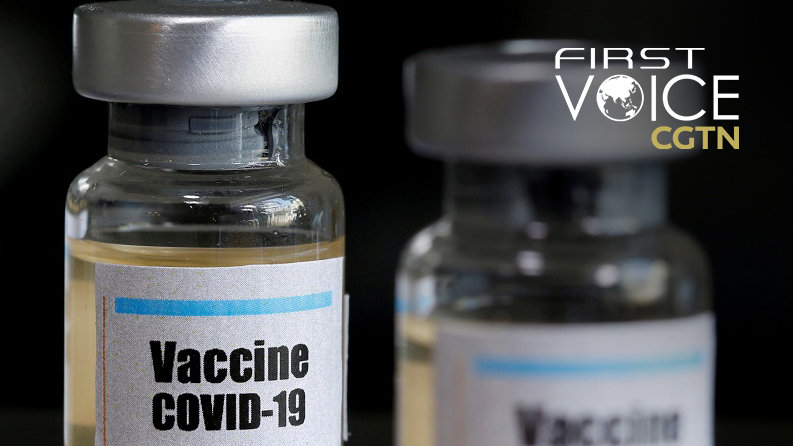 As more countries began to end the lockdown and stimulate the economy caused by COVID-19 pandemic, the World Health Organization (WHO) Director-General Tedros Adhanom Ghebreyesus announced on the first day of this week that seven vaccine candidates have existed, and the researching speed is rapid, "The top ones are around seven or eight (depend on how you count). But we have more than a hundred candidates."

This is good news for global health. However, as the researching progress speeds up, the competition for the final selection will be fierce. At present, from the countries of origin, these seven or eight top vaccine candidates that have entered the clinical stage are divided into three groups - three or four from China, three from the U.S., and one from the UK.

Witnessing the fierce competition in it, the West has begun to do dirty tricks. The media from the UK and agencies from the U.S. have made false claims on China stealing R&D on the vaccine. On May 6, the British tabloid newspaper the Daily Express said on its headline with enigmatic sulks that "how dare China spy on our vaccine labs".

A week later, CNN reported that the U.S. Department of Homeland Security and the Federal Bureau of Investigation (FBI) issued a warning that China is likely launching cyberattacks to steal COVID-19 data related to vaccines and treatments from U.S. institutions, labeling it as a significant threat. However, CNN also said that "the statement did not provide any evidence."

These accusations are arrogant and ignorant, if not intentional. To demonize China's vaccine R&D is a destructive act to the international health community, which is fighting against a common enemy. 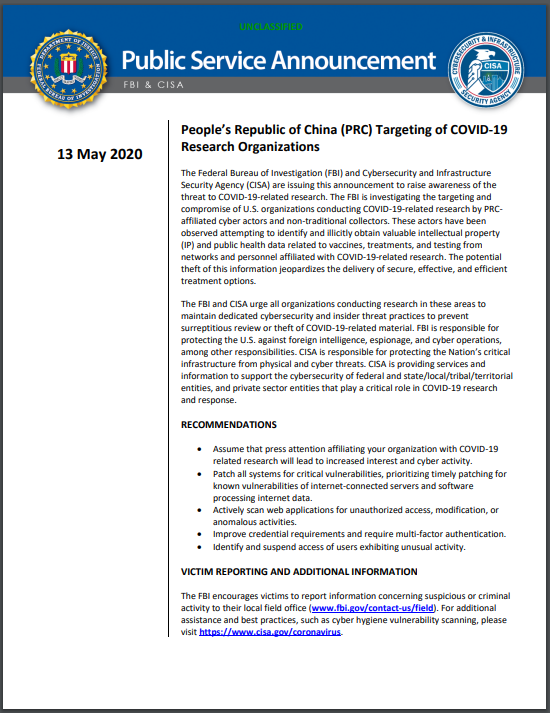 Screenshot of the Federal Bureau of Investigation (FBI) and the Cybersecurity and Infrastructure Security Agency (CISA)'s Public Service Announcement warning organizations researching COVID-19 of likely targeting and network compromise by China, May 13, 2020.

Screenshot of the Federal Bureau of Investigation (FBI) and the Cybersecurity and Infrastructure Security Agency (CISA)'s Public Service Announcement warning organizations researching COVID-19 of likely targeting and network compromise by China, May 13, 2020.

As Sten H. Vermund, dean of the Yale School of Public Health, emphasized on the first seminar of the newly-founded Global Alliance to Combat COVID-19 (GACC) about the importance of global cooperation, that there are at currently more than 90 vaccine candidates of the coronavirus because of experts from different nations working together.

Because China knows these vaccines are for the whole mankind, although China is leading in the field, it is also cooperating with other countries to develop the vaccines.

After an Australian research clinic revealed in April that it would seek volunteers to trial a COVID-19 vaccine developed by a China-based global biotechnology company, Canada's National Research Council confirmed on May 12 that Canada is also collaborating with a biological company in China to pave the way for future trials of candidate vaccines.

Moreover, these Western media is looking without seeing China's leading role in COVID-19 vaccine research. China has researched for that type of vaccine as early as January. The project for the development of an mRNA vaccine targeting the coronavirus has been urgently approved, said Shanghai East Hospital of Tongji University on January 28.

Zhong Nanshan, China's top respiratory expert, made open and clear remarks last week that China already had three vaccine candidates who are in the clinical stage, including two types of inactivated vaccines and a kind of mRNA vaccine, researched and developed from three different labs.

But being in the clinical stage doesn't necessarily mean all of them will go directly into mass production period. They need to go into careful inspections from the vaccine administrative body both in and out of China.

China also has strict laws on the vaccine. In fact, one of these toughest regulations began in December 2019, the same month that the COVID-19 broke out in Wuhan. The regulation is mainly revised after a vaccine scandal broke out in Changchun, China's Jilin province, which shocked the whole country in 2018.

As the WHO official Mike Ryan said yesterday that the virus would never disappear, the importance of developing a vaccine has been lifted. It is important because it provides active immunity from the human body. Without vaccines, people may need to wear masks all year round, and the life of common people may be changed forever.

Half a month later, at the beginning of June, the Global Vaccine Summit will be held in the United Kingdom virtually. Stephen Ndegwa, an international affairs columnist, already pointed out, "Politics of vaccine development" is to dominate the summit, "We expect to hear similar politics as the advanced countries compete on who will be first past the line in the race of the vaccine against COVID-19."

By playing the blame game, no one will benefit from the vaccine, and more lives will be lost due to an endless quarrel for the final winner. Only by vaccination can we save more lives.