COVID-19 Global Roundup: How countries around the world reopen the economy
CGTN 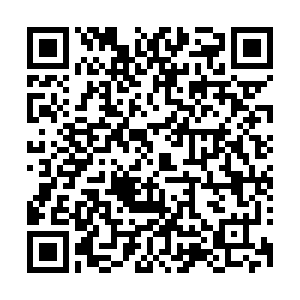 Editor's note: This is the 62nd article in the COVID-19 Global Roundup series. Here is the previous one. 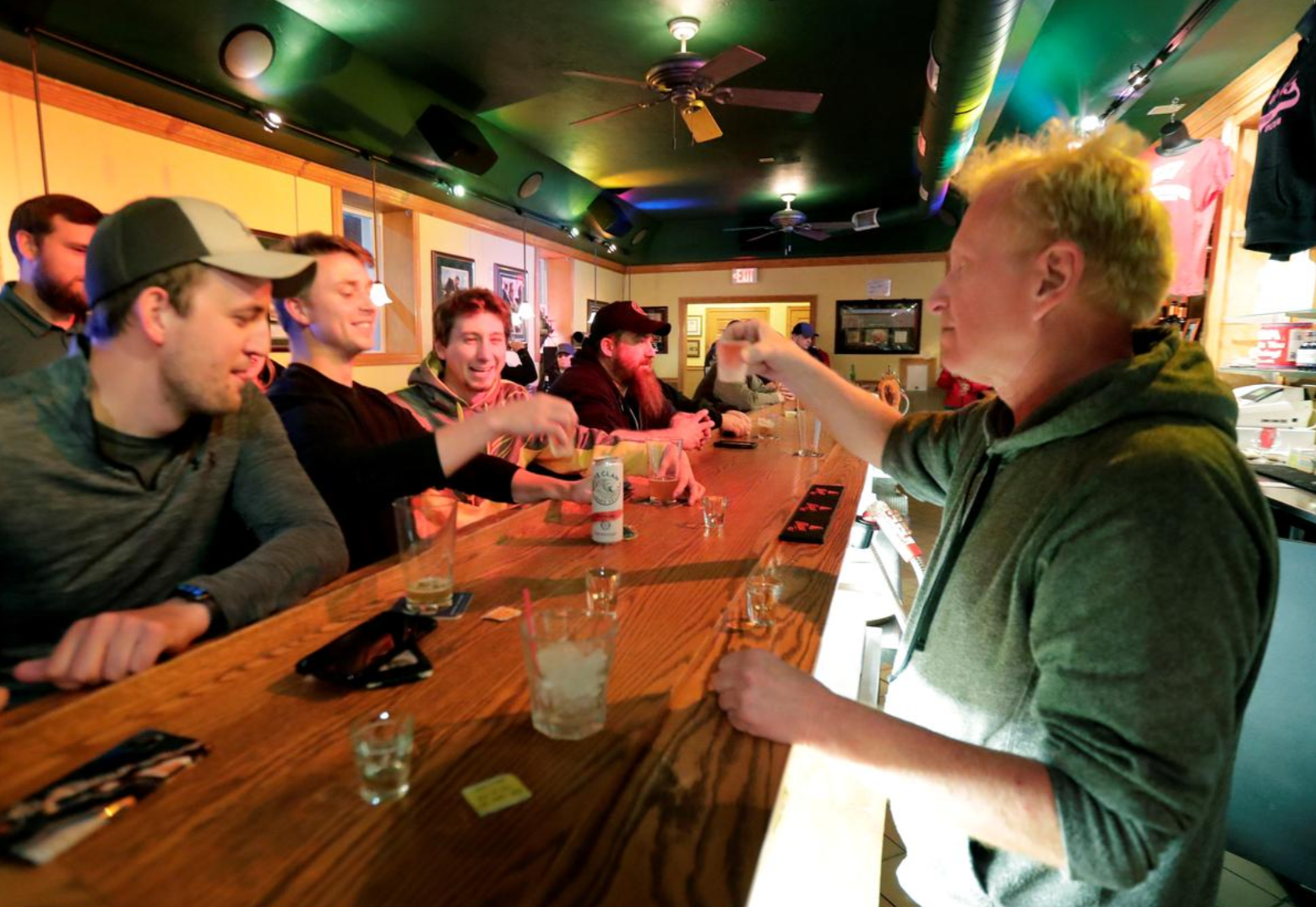 Couples of people are toasting the reopening of the bar in Appleton, Wisconsin, U.S., May 13, 2020. /Reuters

Couples of people are toasting the reopening of the bar in Appleton, Wisconsin, U.S., May 13, 2020. /Reuters

While the total number of confirmed cases of COVID-19 keeps growing worldwide, some countries and state governments have begun to reopen the economy or are mulling to do it as a large contingent of the population is getting anxious over the stay-at-home policy, which triggered a large scale of lay-offs and furloughs.

In the U.S., situation varies in different states, but stay-at-home or shelter-in-place orders around country have been lifted in dozens of states and some restrictions on businesses and public places have been eased.

In Alabama, when the state's stay-at-home order expired on April 30, it issued a replacement order that encouraged people to stay home and continued to ban non-work gatherings of 10 people or more, but allowed gyms, athletic facilities, barber shops, hair salons, nail salons, beaches, restaurants, bars and breweries to reopen with certain restrictions.

Like Alabama, a dozen of states including Arkansas, Florida, Georgia,Hawaii, Indiana have had gyms, fitness centers, shopping malls, restaurants and in-person retail businesses like nail and hair salons reopened with certain restrictions. This comes after the announcement of a broad new federal guidelines in the middle of April titled "Opening Up America Again," laying out conditions for parts of the U.S. to start relaxing some of the strict social distancing measures.

The 18-page plan is not compulsory, but it nevertheless ramps up pressure on governors to loosen their restrictions, even as health experts warn that wide spread testing systems are needed before Americans can safely start returning to their normal lives.

In Europe, as the summer season is coming, the European Union is pushing to reopen internal borders and restart travel to boost its tourism industry, and European governments are also pressing ahead to make their lockdown-exit strategies depending on national circumstances although the prospects of reviving economy were mixed. 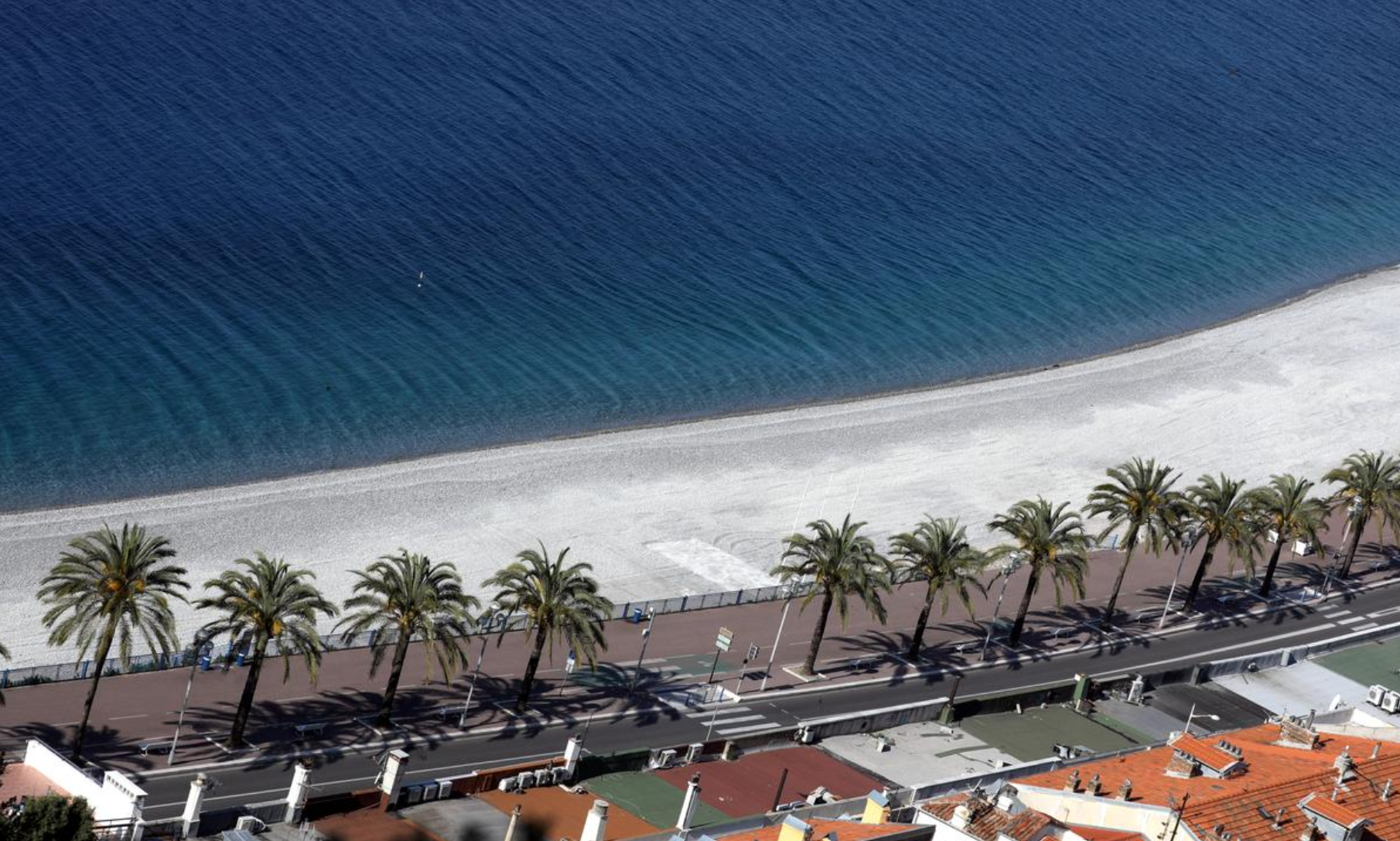 A view shows the empty beach of the Promenade des Anglais in Nice during the pandemic in France, May 7, 2020. /Reuters

A view shows the empty beach of the Promenade des Anglais in Nice during the pandemic in France, May 7, 2020. /Reuters

Spain, with the highest COVID-19 infections in the continent, is planning to keep the country's borders closed to most travelers from abroad until July. It announced its phased lockdown exit strategy on April 28. Beginning with phase 0 on May 4, the country will gradually lift restrictions by the end of June. Apart from phase 0 which is for a week, the other phases stretch to two weeks each.

Phase 0 involved opening up takeaway facilities in restaurants and some establishments such as hair salons.Under phase one, small businesses were opened, like gyms, libraries, but commercial premises were asked to limit their capacity to 30 percent. In phase two, cinemas and theaters are allowed to open with a cap on their capacity up to a third of the people they can accommodate. Phase three, which begins June 8, could see all companies resume services. Schools will remain closed till September.

Italy, with more than 31,000 deaths related to the coronavirus, started loosening restrictions from May 4, allowing people to go back to their permanent places of residence, and to visit their relatives, including their parents, spouses, partners and children if they stay within their province. Activities such as construction, wholesale and manufacturing have also been allowed to resume since May 4.

Further, beginning May 18, regional governments will be allowed to reopen bars, restaurants, hairdressers and beauty salons. Significantly, the rules for loosening restrictions vary across regions. 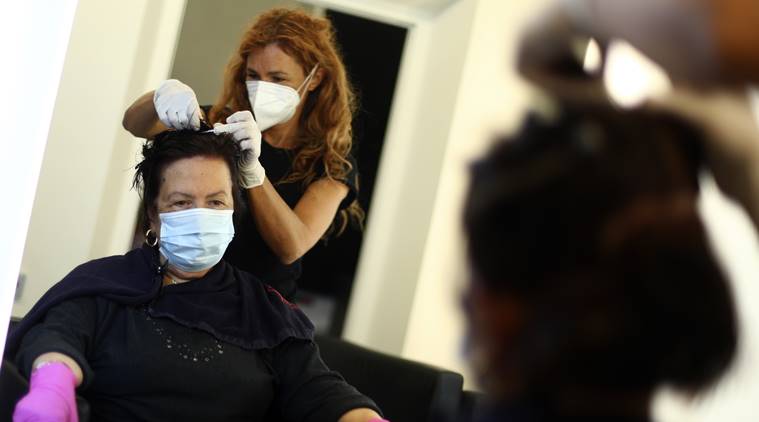 A young hairdresser and a customer in a hair salon in Bressanone, Italy, May 11, 2020. AP

A young hairdresser and a customer in a hair salon in Bressanone, Italy, May 11, 2020. AP

The first step, started from May 13, encourages workers keep working at home, but if they can't they should try to avoid public transportation when they go to work. Under the first step, people can exercise outside as many times each day as they wish and they can also drive to outdoor open spaces irrespective of distance, but they're not allowed to travel to different parts (Scotland, Wales and Northern Ireland) of the UK.

Step two involves the opening of early years settings and schools, non-essential retails and sports facilities. Beginning from June 1, students of Year 1 to Year 6 can go back to schools; cultural and sporting events can take place behind closed-doors for broadcast and more local public transport in urban areas will reopen.

The step three, which will happen no earlier than July 4, goes much further, aiming to open some of the remaining businesses and premises that have been required to close, including personal care (such as hairdressers and beauty salons) hospitality (such as food service providers,pubs and accommodation), public places(such as places of worship) and leisure facilities (like cinemas). 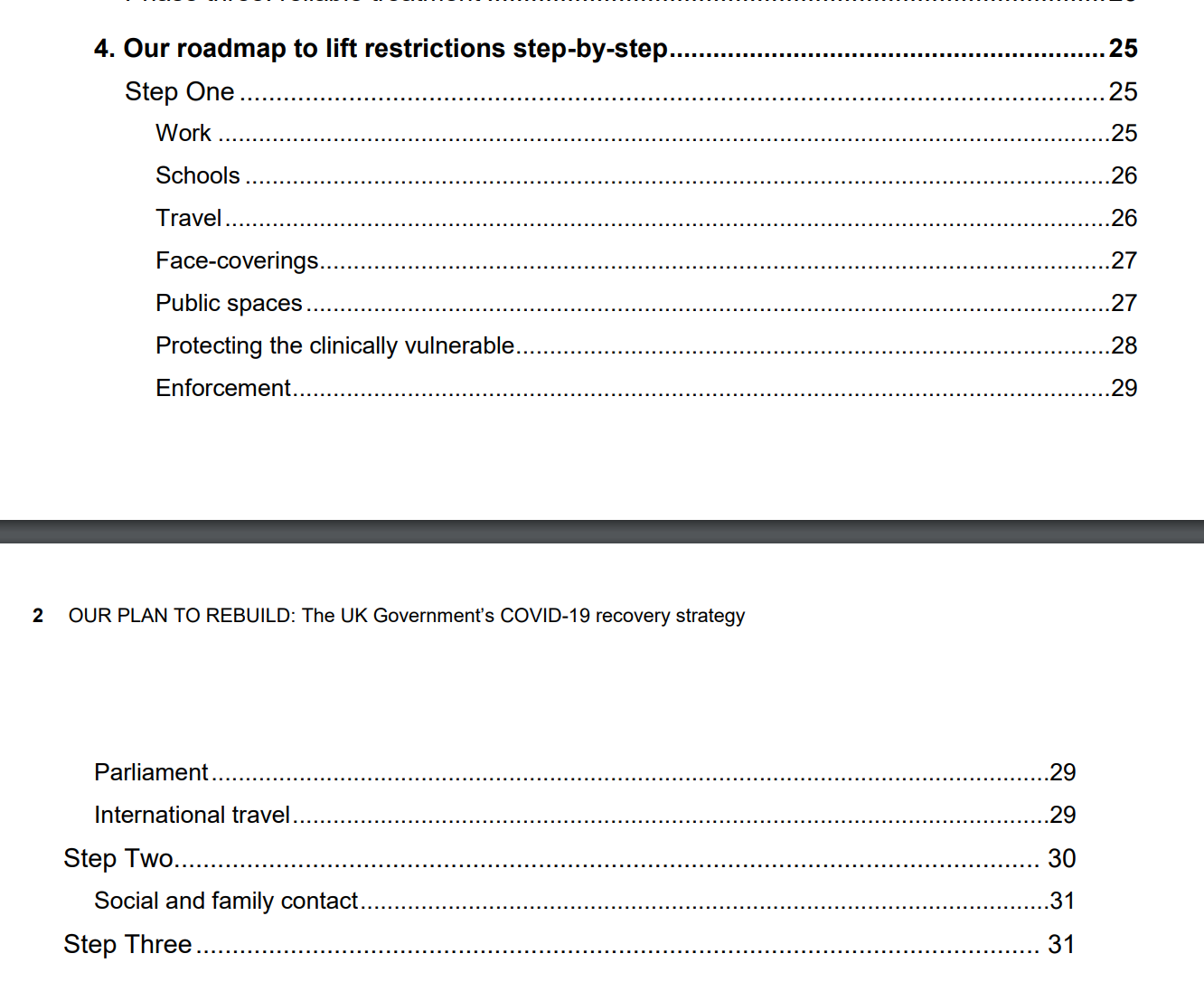 A screenshot from the UK government document titled "Our Plan To Rebuild: The UK Government's COVID-19 recovery strategy."

A screenshot from the UK government document titled "Our Plan To Rebuild: The UK Government's COVID-19 recovery strategy."

German Chancellor Angela Merkel has said Germany's goal of slowing the spread of coronavirus has been achieved, so all shops can be reopened as lockdown restrictions are eased, leaving the 16 federal states of the country to take control of the timing of the reopening.

General contact rules will continue to next month, but a limited resumption has already begun. Schools have been partially reopened for younger children and for those who are taking exams. People from two different households are also allowed to meet each other and elderly people in nursing homes and facilities for the disabled will be able to have visits from one specific person.

However, in common with other countries, Germany is wary of a second surge in infections. The chancellor imposed an "emergency brake," requiring local authorities to reimpose restrictions if cases rise above a threshold of 50 per 100,000 people over a seven-day period.

Outbreaks at meat processing plants in the states of North Rhine-Westphalia and Schleswig-Holstein have already reportedly breached that line, and forced district officials to act. And one district in the state of Thuringia reportedly recorded more than 80 infections per 100,000 people, thought to be due to outbreaks at care facilities.

Russia announced its strategy to ease restrictions a week ago without saying specific measures. But according to some officials, the first step will allow people to go for walks and exercise on the streets and the second stage would see educational establishments and some service-sector businesses return to operation, with recreational facilities including parks and squares then reopening in the third stage.

The ease of restrictions came as the result of a series of catalysts, including petitions from small businesses, the falling oil and gas prices, and the surging number of registered unemployed. 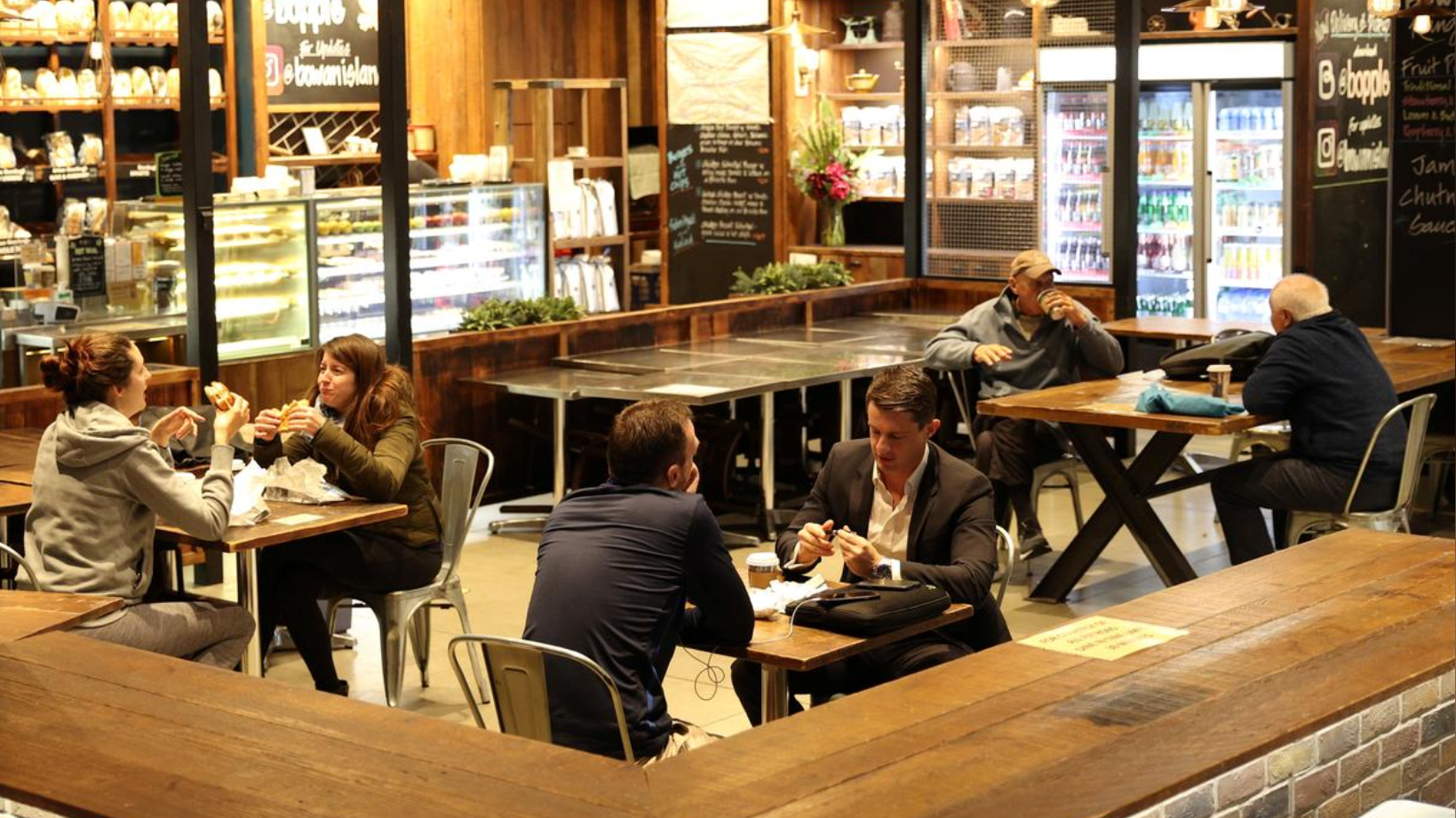 Customers sit at a cafe on the first morning of eased coronavirus disease (COVID-19) restrictions in Sydney, New South Wales, Australia, May 15, 2020. /Reuters

Customers sit at a cafe on the first morning of eased coronavirus disease (COVID-19) restrictions in Sydney, New South Wales, Australia, May 15, 2020. /Reuters

In Australia, restaurants, cafes and bars in the most populous state were reopening on Friday after a two-month shutdown. The easing of quarantine measures in New South Wales (NSW) state is boosting the federal government's bid to get people back in work and the economy back on track as the national statistics office reported unprecedented record high job losses and Prime Minister Scott Morrison warned that worse was still to come.

It's understandable that countries want to open up. The pandemic has resulted in a painful and scary economic downturn; unemployment has spiked in many countries and there's also an emotional toll to social distancing, too: many people haven't seen their families and friends in months; many are lonely desperate for physical contact and some are suffering more domestic violence during the pandemic.

However, the facts that the outbreak has not either peaked or plateaued in some countries and the new coronavirus is fundamentally very contagious, sneaky, and deadly will definitely raise the fears of the public and shadow the prospect of reopening up.