A gear change has taken place on the European continent as countries hit by the coronavirus pandemic are now in transition, gradually lifting lockdown measures and re-opening their economies. This month has seen the turn of European leaders to strike a balance between allowing people to resume normal work practices and preventing the spread of the virus.

Rally against the flag?

When the novel coronavirus hit Europe, countries trended towards unity, adopting a wartime mentality to fight the new enemy. But, as lockdown fatigue and urgency over restarting economies mounts, governments are facing more criticism.

"If governments can't keep the epidemic under control, or if the economic recovery is slow in coming, voters will blame the incumbents, and more political turmoil will loom," Constantine Fraser, European political research analyst at advisory firm TS Lombard, told CGTN.

Germany, where the coronavirus outbreak has been more muted, has seen protests in recent weeks against lockdown restrictions. Last weekend, thousands took to the streets in cities including the capital Berlin, Munich and Stuttgart to demonstrate against measures imposed by the government to curb the pandemic.

"In many countries, those who want to go back to work belong to two groups: Those who feel the economic pain more and do not receive enough government support, (and) those who are ideologically motivated and feel individual freedom is being violated," Antonio Fatas, professor of economics at INSEAD told CGTN. 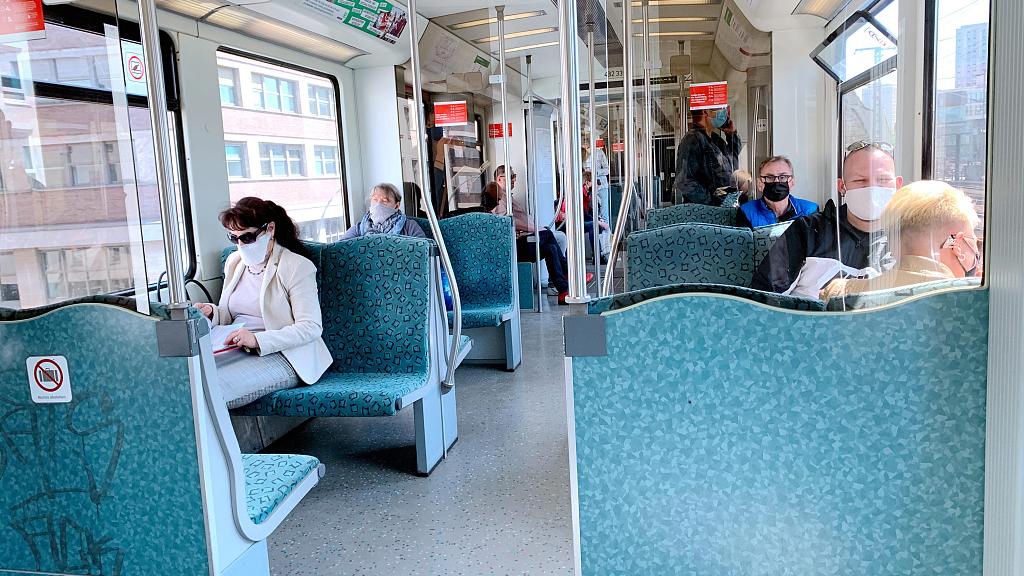 A switch up among Europe's ruling political parties might not be on the cards just yet. While incumbent leaders have been extra-visible to the public via regular press conferences and wall-to-wall media coverage, opposition voices have instead been fighting for airtime.

But, in France, President Emmanuel Macron's La Republique En Marche party lost its parliamentary majority on Tuesday as a group of MPs broke away to form a separate party. The move is a fresh headache for the French leader, who is struggling to maintain the backing of his country: 39 percent said they trusted the government to handle the coronavirus crisis efficiently, according to a May Ifop poll, a drop from 55 percent in March.

Meanwhile, in Hungary, criticism of strongman Prime Minister Viktor Orban is getting louder, according to the Financial Times' reporting on Tuesday. Orban, whose power drastically increased during the pandemic, is an ongoing spat with Budapest mayor and leader of the liberal Dialogue party Gregely Karacsony over the country's health crisis. 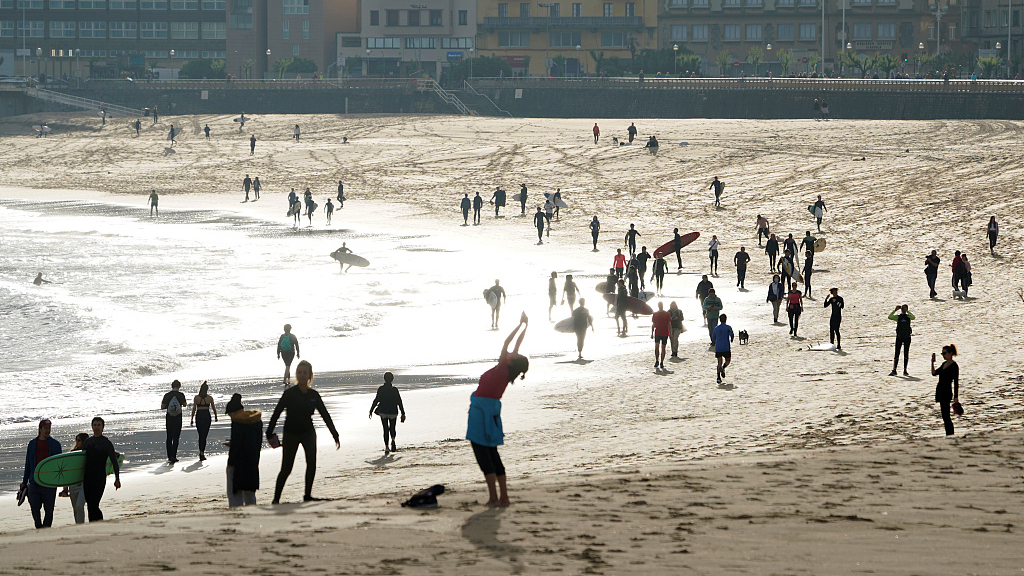 People at Zorriola beach in San Sebastian, Spain, as adults are allowed out to exercise for the first time in seven weeks, May 2, 2020. /VCG

People at Zorriola beach in San Sebastian, Spain, as adults are allowed out to exercise for the first time in seven weeks, May 2, 2020. /VCG

On Tuesday, France and Germany proposed a European Union (EU)-wide 500 billion euro (543 U.S. dollars) Recovery Fund designed to help a European economy ravaged by coronavirus by offering grants to regions and sectors most affected by the pandemic.

TS Lombard's Fraser tempered surprise at the size of the rescue package. "500 billion euros obviously seems like a lot of money in absolute terms, but it's only about 3.5 percent of EU GDP – and member states will ultimately have to service the debt themselves," he said.

The plan can be considered an overture on behalf of the European Union's two most dominant members towards unity. "The best-case scenario is that this is a clear gesture of solidarity which is appreciated in southern Europe and palatable in the north; the worst-case scenario is that it is derided in Italy as being too small, while still seeming uncomfortably large to northern European voters," Fraser continued.

The approach differs from the austerity-led economic policies following the global financial crisis just over a decade ago and demonstrates an acceptance of indebtedness – though question marks remain about how this will ultimately be serviced.

Nonetheless, the biggest news is that Germany, Europe's largest economy and often more cautious about closer economic cooperation, is one of the package's proponents.

"Countries like the Netherlands and Austria have been the main opponents to (such a proposal). But Germany's explicit backing matters, and the proposal makes clear there will be conditionality – money is likely to be spent on common European goals. Both these things could lure hawkish countries," Emily Mansfield, principal economist at research firm The Economist Intelligence Unit, explained. 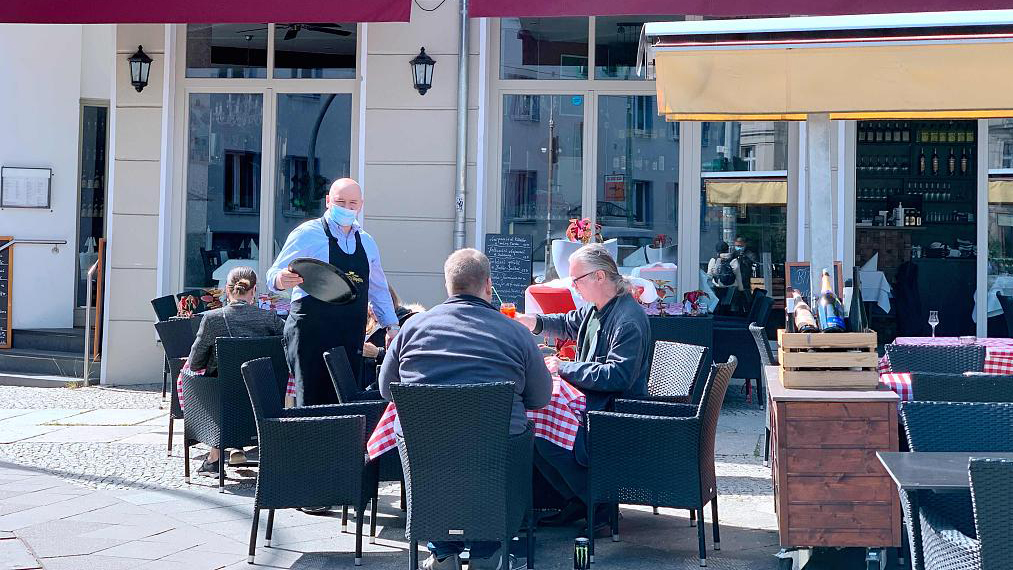 A cafe open in the German capital Berlin, operating under strict anti-coronavirus requirements, May 15, 2020. /VCG

A cafe open in the German capital Berlin, operating under strict anti-coronavirus requirements, May 15, 2020. /VCG

A Catch 22 for governments

Some countries have been much harder hit by the coronavirus pandemic than others.

"You can see success in countries that: Have been good at containing the spread, have the courage to put the economy back into a path of recovery and can communicate well to its citizens what is happening," INSEAD's Fatas said, highlighting Denmark, Austria and Germany as positive examples.

But some governments are in a Catch 22 as they continue to fight the pandemic: Acting quickly to save lives has usually meant a swift economic shutdown, meaning that leadership must now balance the risk to public health with preventing further job losses.

"It will be interesting to see if (economic) growth in Sweden is any stronger than its neighbors in April-June," Fung Siu, principal economist at The Economist Intelligence Unit, told CGTN. "Sweden did not impose restrictions when its neighbors did. Sweden, nevertheless, recorded a higher fatality rate than its neighboring countries," she said.