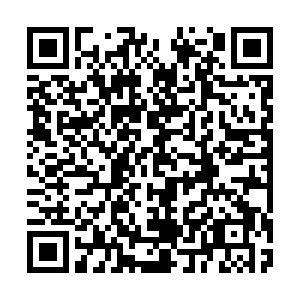 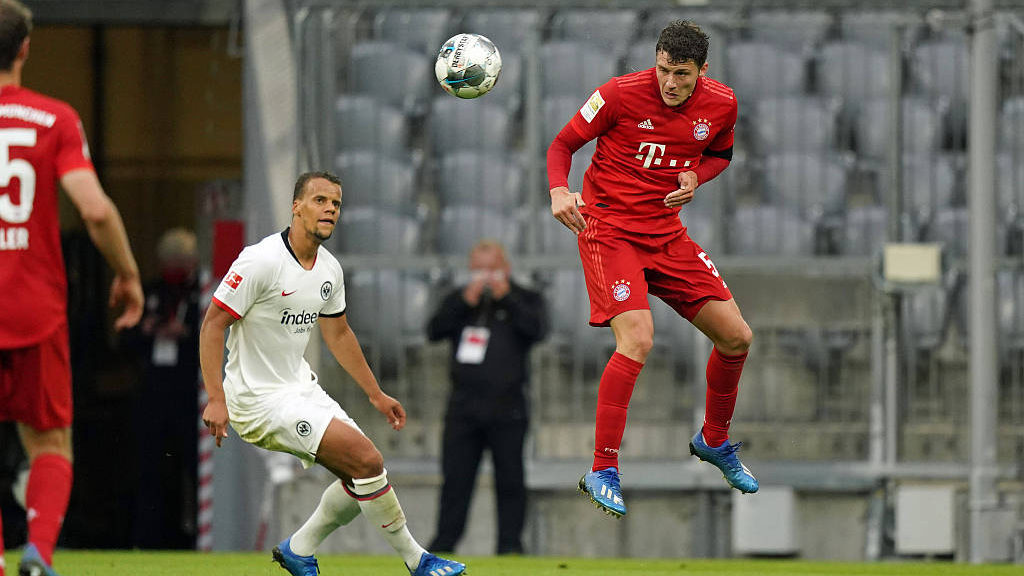 Players in action during the Bundesliga match between Bayern Munich and Eintracht Frankfurt in Munich, Germany, May 23, 2020. /VCG

Players in action during the Bundesliga match between Bayern Munich and Eintracht Frankfurt in Munich, Germany, May 23, 2020. /VCG

Bundesliga leaders Bayern Munich resisted a second-half fightback by Eintracht Frankfurt to claim a 5-2 win behind closed doors on Saturday (May 23) ahead of Tuesday's top-of-the-table clash at Dortmund.

Bayern cruised into a 3-0 lead with goals by Leon Goretzka, the league's top-scorer Robert Lewandowski and Thomas Mueller at the Allianz Arena before Frankfurt rattled the hosts.

Defender Martin Hinteregger bagged two quick goals from successive corners when he volleyed home, then headed in to make it 3-2 on 55 minutes.

Canadian teenager Alphonso Davies settled Bayern's nerves by reclaiming a ball he lost in the area to fire home the hosts' fourth goal with an hour gone.

Hinteregger then claimed an unwanted hat-trick when he turned a Serge Gnabry shot into his own net to make it 5-2 on 74 minutes.

This was the second weekend of the Bundesliga's restart, following a two-month hiatus, as the first top European league to resume during the pandemic.

A minute's silence was held before the day's five matches to remember the victims of COVID-19, which has so far claimed 8,216 lives in Germany. 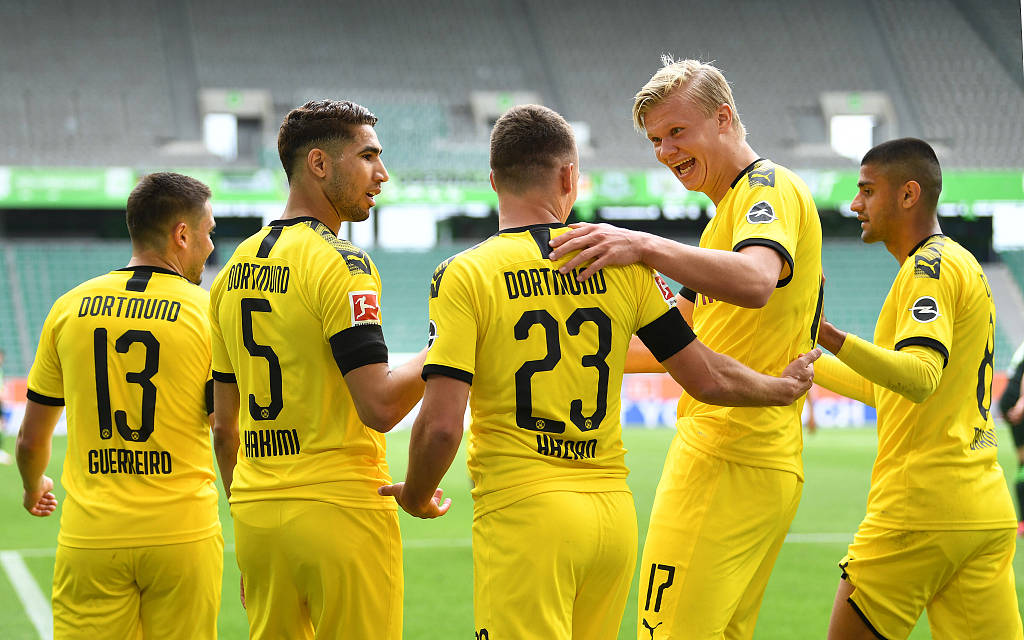 Dortmund players celebrate their win against Wolfsburg in a Bundesliga match in Wolfsburg, Germany, May 23, 2020. /VCG

Dortmund players celebrate their win against Wolfsburg in a Bundesliga match in Wolfsburg, Germany, May 23, 2020. /VCG

Elsewhere, Dortmund claimed a 2-0 win at Wolfsburg with goals by Raphael Guerreiro and Achraf Hakimi.

Dortmund coach Lucien Favre said the lack of fans' noise in the stadium helped him give instructions.

"I think it's positive that the players can now hear me better in the stadium," said Dortmund's Swiss coach, whose calls echoed around the empty terraces.

Dortmund winger Guerreiro opened the scoring in the 32nd minute when he tapped home a cross.

England winger Jadon Sancho helped sealed the win when he dribbled at the Wolfsburg defense, then laid a pass off to Hakimi, who fired home 12 minutes from time.

Bayer Leverkusen built on Monday's drubbing of Werder Bremen by moving up to third place with a 3-1 win at Borussia Moenchengladbach, who dropped to fourth.

With the terraces at Borussia Park decked with 13,000 cardboard cut-outs of home fans, Leverkusen's rising star Kai Havertz, who scored twice in the 4-1 rout of Bremen, again netted a brace.

Defender Sven Bender unwittingly sealed the win when a free-kick struck his shoulder and flew into the net nine minutes from time.

Second-from-bottom Werder Bremen claimed their first victory in eight league game with a 1-0 win at Freiburg. Midfielder Leon Bittencourt hit the winner in the 19th minute with a long-range shot.

The result leaves Bremen two points from 16th – which carries a relegation playoff at the end of the season – but six points from 15th, which guarantees safety.

Bottom side Paderborn are now nine points from safety with seven games left after their 1-1 draw at home to Hoffenheim.

On Friday, Hertha Berlin drubbed neighbors Union Berlin 4-0 at the Olympic Stadium in the derby to go 10th.