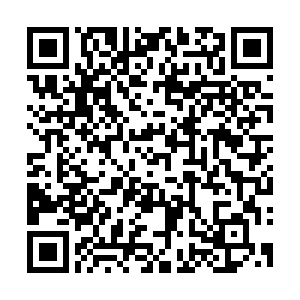 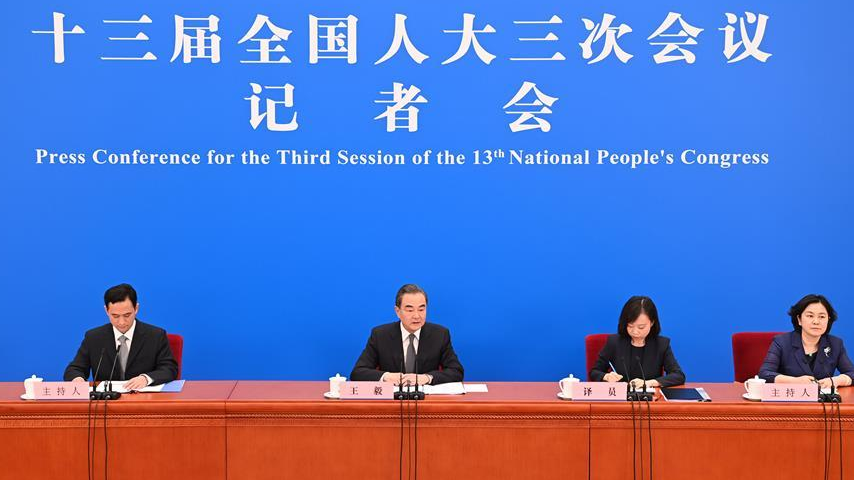 Chinese State Councilor and Foreign Minister Wang Yi (2nd L) attends a press conference on China's foreign policy and foreign relations via video link on the sidelines of the third session of the 13th National People's Congress (NPC) at the Great Hall of the People in Beijing, capital of China, May 24, 2020. /Xinhua

Chinese State Councilor and Foreign Minister Wang Yi (2nd L) attends a press conference on China's foreign policy and foreign relations via video link on the sidelines of the third session of the 13th National People's Congress (NPC) at the Great Hall of the People in Beijing, capital of China, May 24, 2020. /Xinhua

Editor's note: Wang Zhen is a council member and former vice president of Chinese People's Institute of Foreign Affairs. The article reflects the author's opinions and not necessarily the views of CGTN.

The draft decision on national security legislation for the Hong Kong Special Administrative Region (HKSAR) is in the spotlight at this year's Two Sessions.

Chinese State Councilor and Foreign Minister Wang Yi reiterated at a press conference on Sunday (May 24) that Hong Kong affairs are China's internal affairs, and no external interference will be tolerated.

A small group of rioters tore Hong Kong apart last year, damaging the prosperity and stability of the city and disrupting the lives of its residents.

It represented the most violent episode Hong Kong had ever seen since returning to China, where national security was jeopardized and the bottom line of the "One Country, Two Systems" principle was flouted.

And when the coronavirus outbreak hit, they attempted to stir trouble from time to time amid the public health crisis.

After their plan to stage a demonstration against the National Flag Law on May 1 went bust, they plotted to protest against the decision on establishing and improving the legal system and enforcement mechanisms for the HKSAR to safeguard national security, which will be deliberated and passed at the annual national legislative session.

Once again, they crossed the red line set by the Constitution of the People's Republic of China and the Basic Law of the HKSAR.

The group of Hong Kong separatists got some unlikely companionship from Taiwan secessionists.

During the 73rd World Health Assembly, with strings pulled by the United States, Taiwan's Democratic Progressive Party (DPP) authority made quite a farce by intending to crash the party on the grounds of fighting the pandemic. But its real purpose was to "expand international living space."

Moreover, Tsai Ing-wen, the top official of the DPP authority once again publicly declared her refusal to recognize the 1992 Consensus, assaulting the very political foundation of cross-Strait relations.

However, Tsai was congratulated in a high-level message by U.S. Secretary of State Mike Pompeo, who openly addressed her as "president" and stood up for her separatist agenda.

A minority group of Taiwan separatist politicians pushed for a "revision of Taiwan Referendum Act" in an attempt to create "legal basis for Taiwan's independence," causing indignation from the Chinese people.

With the coronavirus spreading across the globe, tensions rising between the United States and China – two of the world's major powers, the international society embroiled in turmoil and economy sliding, the year 2020 seems to have a less-than-optimistic prospect.

Nevertheless, 2020 is the final year of China's ongoing poverty alleviation campaign and also a decisive year for building a moderately prosperous society in all respects. More importantly, it is a crucial juncture for the rejuvenation of the Chinese nation. 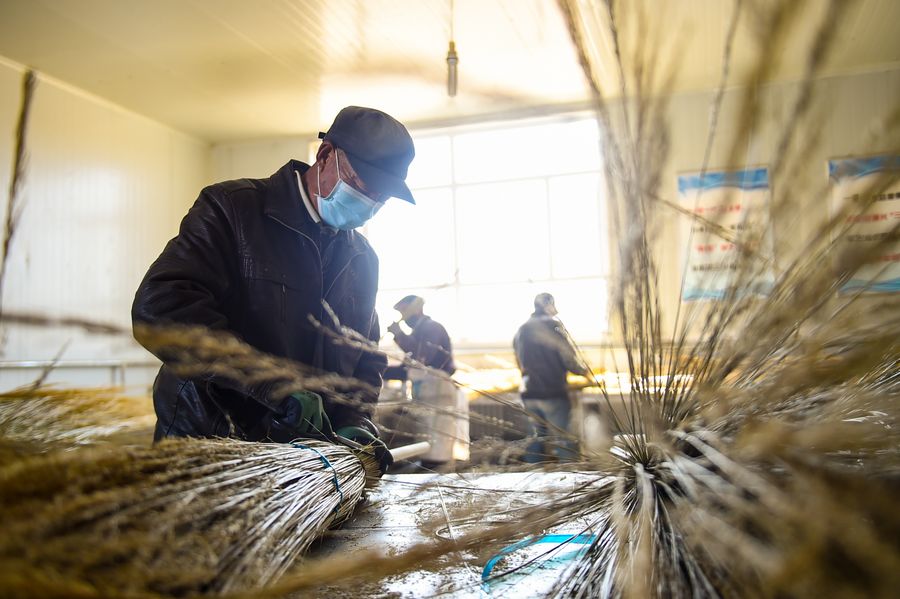 As the descendants of a great nation, the closer we get to this glorious goal, the more eager we are to see the reunification of our motherland, hence the need to maintain national security.

At this critical stage, Hong Kong and Taiwan separatists are doomed to fail as they create chaos and launch offensives at the core interests of the country and the nation. For them, self-destruction beckons.

It's clear that what happened in Hong Kong and Taiwan is closely linked to the interference from external forces. The United States and other Western countries colluded with the separatist forces, whose involvement is at the root of the current murky situations and may lead to future uncertainties.

We will not ignore the fact that American politicians go back on their promise and sell weapons to Taiwan every year, blatantly driving wedges into cross-Strait relations, and cheerleading Taiwan authority's obstruction of China's peaceful reunification.

Almost every year, American politicians would pass Taiwan-related bills, throwing their weight behind the Taiwan authority. American navy vessels often cruise the Taiwan Straits and adjacent waters to provoke China. Their military and political figures sometimes bark that they will "never sit back and watch" China take actions of reunification.

Let's get back to Hong Kong. Since last year's unrest, the United States has finally thrown caution out of window by openly instigating, funding and coaching separatists in Hong Kong in its thinly veiled attempt to rip apart the city and even subvert China.

The U.S. Congress passed the Hong Kong Human Rights and Democracy Act of 2019 to restore the so-called democracy and freedom in Hong Kong, openly vilified the legal system of the People's Republic of China and the HKSAR, and made irresponsible remarks on China's exercise of sovereignty.

All sovereign states regard maintaining national unity and territorial integrity, safeguarding national security and national sovereignty as the primary clauses in the Constitution, and swear to defend them as they are the sacred and inviolable rights of a nation.

Taiwan and Hong Kong are an inalienable part of China. The complete reunification of the motherland is the unswerving desire and goal of the Chinese nation and an indispensable symbol of the great undertaking of national rejuvenation. Since it is China's internal affairs, no foreign country has the right to intervene. If anyone is hell-bent on getting involved, such action itself constitutes a declaration of war. It has no legal basis; nor will the third party have anything to gain from it.

Hong Kong is a special administrative region of China. At the heart of "One Country, Two Systems" is "one country." China's highest legislative body is entitled to deliberate and pass the decision on establishing and improving the legal system and enforcement mechanisms for the HKSAR to safeguard national security, as it is a power conferred by the Constitution.

The implementation of relevant legal systems by the central government and the HKSAR government has sound legal grounds and is not to be tempered with. Those who want to separate Taiwan from China and undermine the relationship between Hong Kong and the mainland are doomed to fail.

The United States and its followers know this very well. Some have long questioned: if one day Alaska or any state of the United States wants independence, will the president and Capitol Hill politicians agree? American politicians have avoided this question, but their partners have responded with action. Look at what Canada does with Quebec and what Britain does with Northern Ireland. Spain once vanquished Basque, a secessionist group, and today it's busy wrestling with Catalonia which also wants independence.

The United States and the West orchestrated the disintegration of the former Soviet Union and later the independence of Kosovo and other countries by initiating "color revolutions," all under the guise of "nation first" and "freedom first." But they never allowed any part of their own country to split out. They rightly want to keep themselves together, but why is it an entirely different story when it comes to other countries?

To put it bluntly, they are following double standards in international relations. These are typical actions of hegemons and bullies. From this standpoint, we see them acting in flagrant disregard of rules, imposing "long-arm jurisdiction" on other countries, interfering with their internal affairs, resorting to unilateral sanctions wantonly, and pushing for unilateralism, which has made the world a cesspit of anger and anxiety.

With the coronavirus sweeping across the world and over 90,000 Americans having lost their lives due to their government's slow response to the outbreak the time of reckoning finally arrives for the extreme egoism of the U.S. and the West.