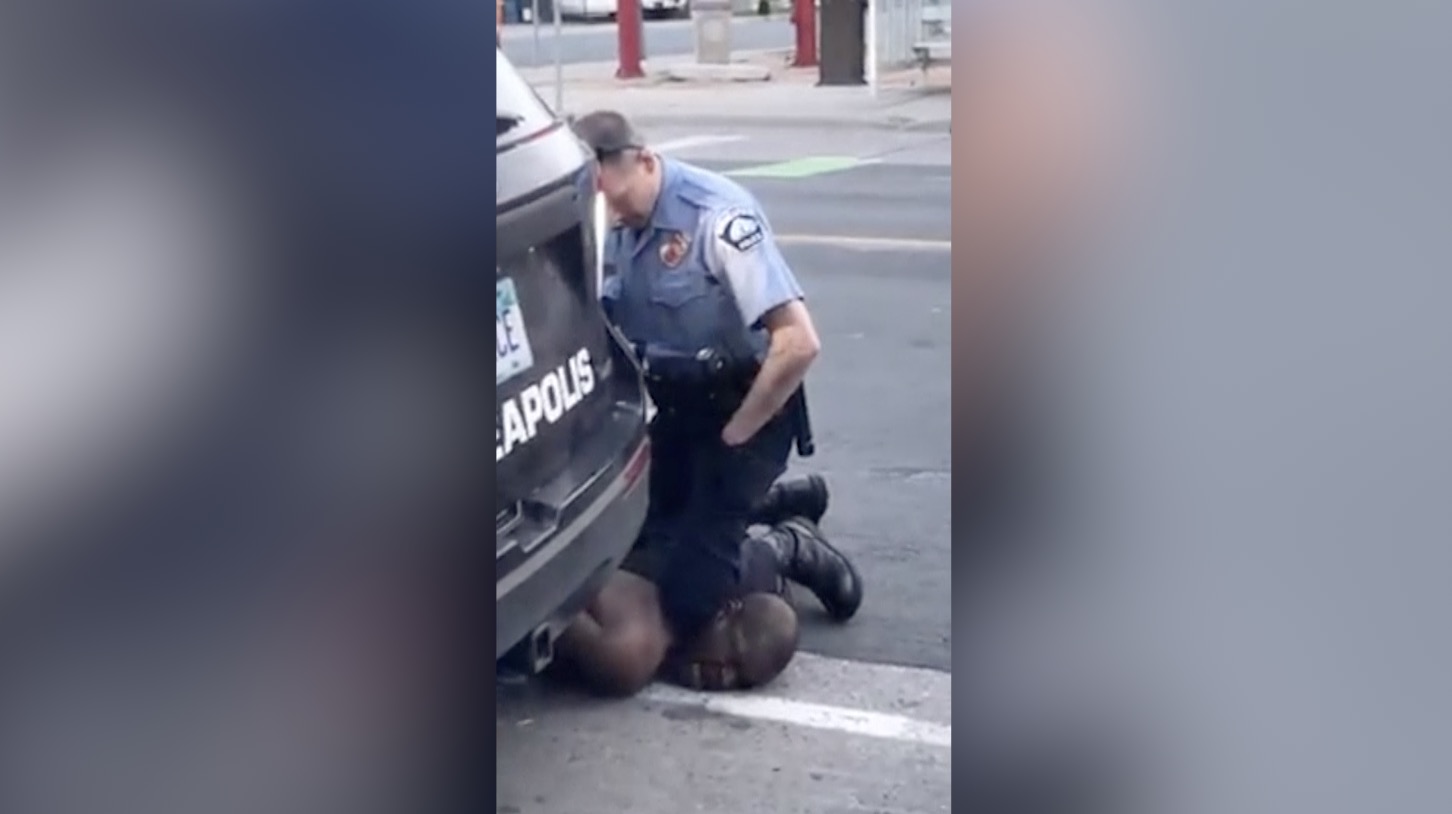 A group of protesters swarmed a Minneapolis police station on Thursday after the police killing of an unarmed African American, 46-year-old restaurant worker George Floyd, left numerous stores ablaze and one person dead.

Demonstrators breached a door and entered the station as fires spread inside. Outside, dozens of others launched fireworks and chanted in megaphones, yelling "No Justice, No Peace."

The U.S. National Guard troops have been deployed to Minneapolis after the violent clashes.

Four officers from Minneapolis police have been fired over Floyd's death after a video of the incident surfaced. It showed Floyd in handcuffs pinned to the ground face down, groaning for help and repeatedly saying, "Please, I can't breathe," before becoming motionless. He died in hospital shortly afterwards.

The White House said President Donald Trump was "very upset" upon seeing "egregious, appalling" video footage of Monday's killing and had demanded his staff see that the investigation was given top priority.

The FBI and Justice Department said they were investigating, while the city weighed calling in National Guard troops as well as police from neighboring St. Paul to help keep the peace.

"In the coming days we will have an all-out effort to restore peace and security in our city," said Mayor Jacob Frey, who has demanded the arrest of the officer allegedly responsible for Floyd's death on Monday. It was crucial to protect community assets like food stores and pharmacies "especially during a pandemic," he added.

Meanwhile, Twitter on Friday flagged a post by U.S. President Donald Trump on the unrest in Minneapolis as "glorifying violence," saying the tweet violated its rules but would not be removed. "This Tweet violated the Twitter Rules about glorifying violence. However, Twitter has determined that it may be in the public's interest for the Tweet to remain accessible," the notice read.

The U.S. president had tweeted the military was being sent into the embattled midwestern city as authorities there struggle to contain unrest over the death of an unarmed African American at the hands of police.

Demonstrators clashed with law enforcement, looted stores and set fires to shops and a construction site overnight in the busy Lake Street corridor of Minneapolis, and were met with police tear gas and rubber bullets. 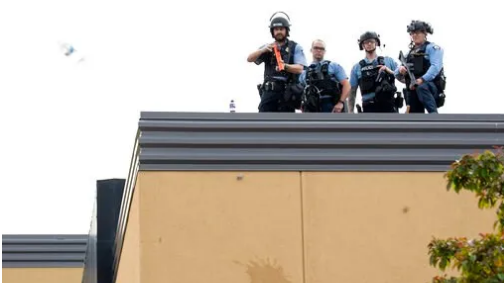 A water bottle thrown by a protester sails through the air near officers on the roof of Minneapolis Police 3rd Precinct, Minneapolis, Minnesota, U.S., May 27, 2020. /AP

A water bottle thrown by a protester sails through the air near officers on the roof of Minneapolis Police 3rd Precinct, Minneapolis, Minnesota, U.S., May 27, 2020. /AP

Police chief Madaria Arradondo said he supported the public's right to demonstrate peacefully but warned he would not allow the kind of violence that took place Wednesday. "I know that there is a deficit of hope in our city... I know that this department has contributed to."

The vast majority of protesters had been peaceful but there was a core group of demonstrators who had been focused on causing destruction, he added.

Ilhan Omar, a black Somalia native who represents Minneapolis in Congress, called for calm but said there was "extreme frustration" in the community over the incident. "Anger really is boiling over because justice still seems out of reach," she added.

Firefighters continued to battle blazes around midday Thursday around Lake Street, where more than 20 businesses were set on fire. 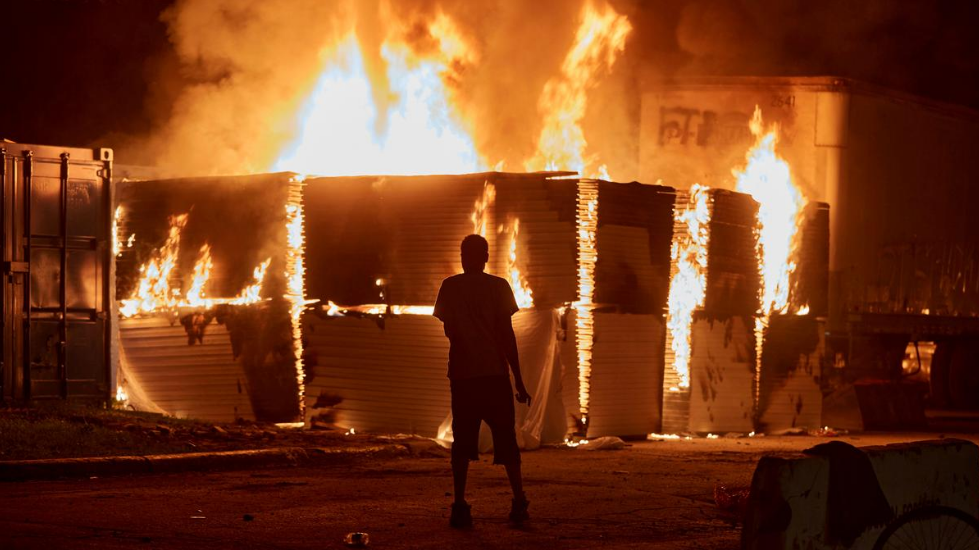 Protesters gather to watch an apartment building burning near the Minneapolis Police third precinct after a white police officer was caught, Minneapolis, Minnesota, U.S., May 27, 2020. /Reuters

Protesters gather to watch an apartment building burning near the Minneapolis Police third precinct after a white police officer was caught, Minneapolis, Minnesota, U.S., May 27, 2020. /Reuters

One person was reported dead of a gunshot wound, with police investigating whether he was shot by a shop owner in the area of the most severe rioting.

The protests were sparked by the widely-shared video. They took place outside the house of one of the four officers involved in the detention and death of Floyd, as well as at the home of Hennepin County Attorney Mike Freeman, demanding he indicts the officers.

Floyd's brother, Philonise Floyd, told CNN the officers, who were fired, should be arrested and charged with murder.

"Justice is these guys need to be arrested, convicted of murder and given the death penalty," he said.

"But people are torn and hurting because they are tired of seeing black men die, constantly, over and over again."

Concern and anger over Floyd's death spread around the country. 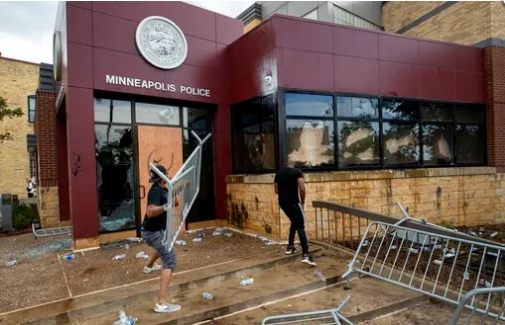 House Democratic leader Nancy Pelosi said the video footage showed there was no excuse for his death.

"We saw a murder take place before our very eyes. And so the fact that the officers were fired, that's one thing, but there has to be some justice in all of this," she said.

In Los Angeles, where there are longstanding tensions between law enforcement and the black community, protesters marched on downtown Los Angeles and briefly blocked the 101 Freeway on Wednesday.

Some smashed the windows of two police highway patrol cruisers, clambering on the hood of one of the vehicles.

The protests evoked memories of riots in Ferguson, Missouri in 2014 after a policeman shot dead an African American man suspected of robbery, and the case earlier the same year of New Yorker Eric Garner, who was detained for illegally selling cigarettes and filmed being held in an illegal choke-hold that led to his death.

Protests spread across the United States

Protests have been at other parts of the United Sates. CNN reported that protesters took to the streets in "Denver, Colorado; New York City; Memphis, Tennessee; Phoenix, Arizona; and Columbus, Ohio."

As of early Friday morning, some buildings were still on fire in Minneapolis and protesters could be seen on the streets in the city.

Local media reported that so far there have been no official charges against the officers involved in the death of Floyd.