Obama on George Floyd's death: 'This shouldn't be 'normal' in 2020 America'
CGTN 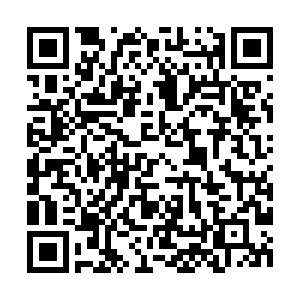 Former President Barack Obama on Friday said that the death of George Floyd, an unarmed black man, while he was in police custody, "shouldn't be 'normal' in 2020 America."

"It can't be 'normal.' If we want our children to grow up in a nation that lives up to its highest ideals, we can and must be better," Obama said in a statement as protests have erupted across the country. 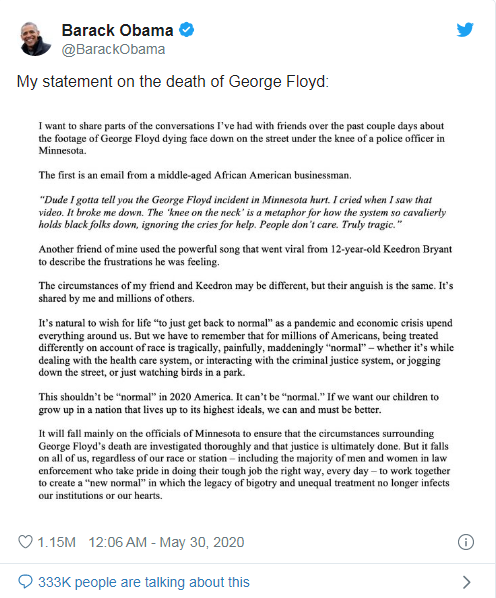 The former president said this in reference to the idea that many people in America would like life to go back to "normal" in the face of the coronavirus pandemic. But, he wrote, "being treated differently on account of race is tragically, painfully, maddeningly 'normal'" for millions of Americans.

"But it falls on all of us, regardless of our race or station, including the majority of men and women in law enforcement who take pride in doing their tough job the right way, every day, to work together to create a 'new normal' in which the legacy of bigotry and unequal treatment no longer infects our institutions or our hearts," Obama continued.

Former first lady Michelle Obama also later shared a string of tweets about Floyd's death, writing in part, "Like so many of you, I'm pained by these recent tragedies. And I'm exhausted by a heartbreak that never seems to stop. Right now it's George, Breonna, and Ahmaud. Before that it was Eric, Sandra, and Michael. It just goes on, and on, and on."

President Donald Trump said on Friday he had spoken with the family of George Floyd, adding that "we can't allow" the demonstrations in Minneapolis "to descend further into lawless anarchy and chaos."

The white former Minneapolis police officer Derek Chauvin was arrested Friday on charges of third-degree murder and second-degree manslaughter after a bystander video showed him pinning his knee into the neck of George Floyd.

"We have evidence, we have the citizen's camera's video, the horrible, horrific, terrible thing we have all seen over and over again, we have the officer's body-worn camera, we have statements from some witnesses," Hennepin County Attorney Mike Freeman told a news briefing.

The charges came after a third night of turmoil, which saw protesters set fire to a police station in Minneapolis and the National Guard deployed to help restore order.

Minneapolis Mayor Jacob Frey imposed an 8 p.m. curfew to try to stop the violence that has wracked the city for the past three nights. The curfew will extend through the weekend, expiring at 6 a.m. each morning, and prohibits people from traveling on public streets or gathering in public places.

Meanwhile, the White House has been locked down as protesters over Floyd's death hit the U.S. capital Friday night, according to local media.