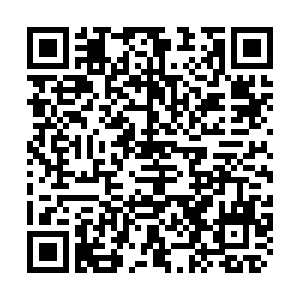 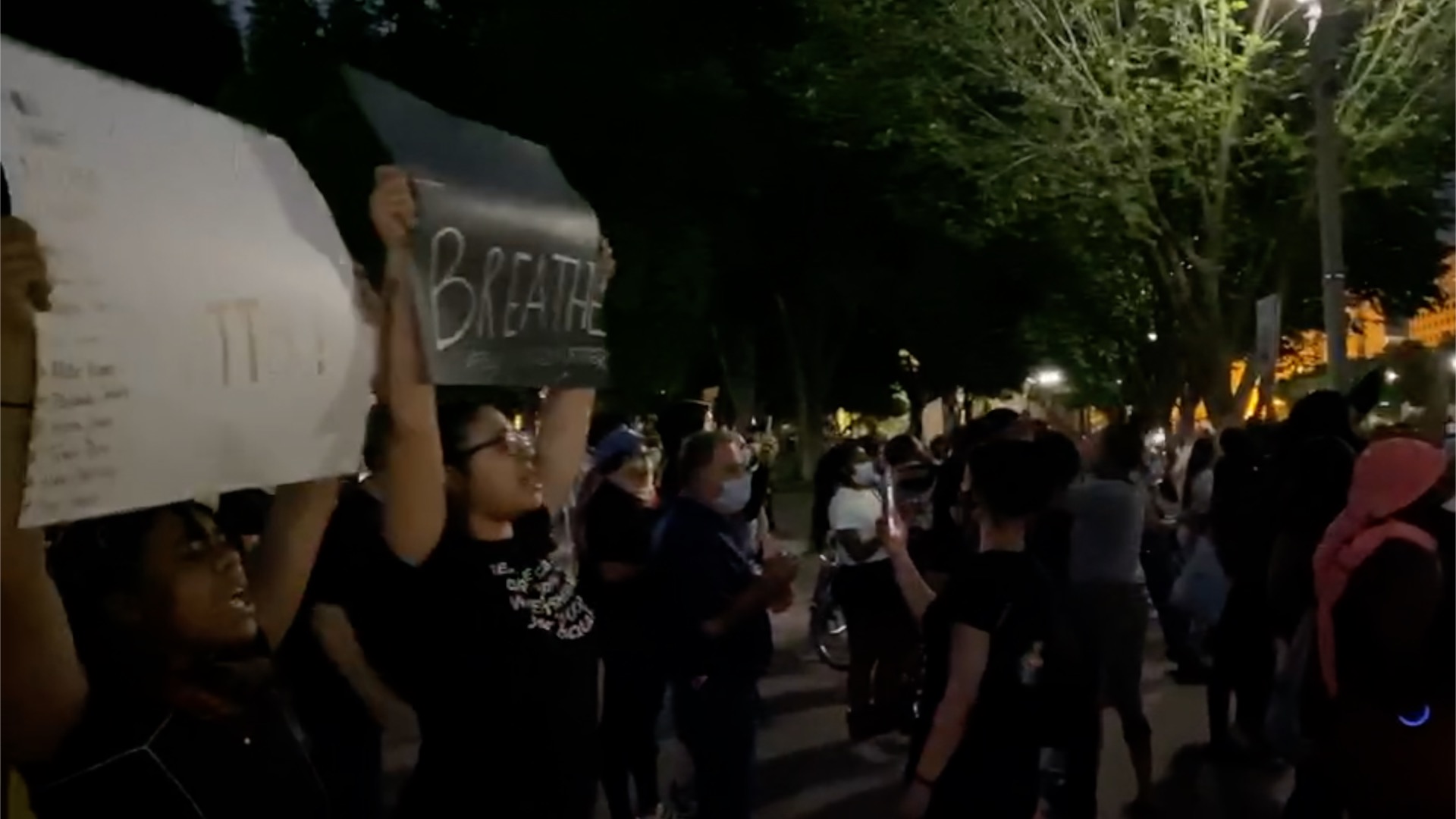 Protests have erupted in at least 30 U.S. cities over the death of George Floyd, a Minneapolis black man who died after being pinned by the neck under a white police officer's knee.

Thousands of protesters stormed the security perimeter of Barclays Center in New York as protests spread across the United States over the killing.

Police made scores of arrests at Friday's massive demonstration in Brooklyn, loading cuffed protesters onto city buses lined up on Atlantic Avenue and shutting down a major thoroughfare.

A diverse group of protesters cheered to hip hop music and tried to argue about police brutality with police officers in riot gear, who occasionally lunged into crowds to pluck people out for arrest after bottles and other projectiles were thrown.

The demonstrators at a "We can't breathe" vigil and rally in lower Manhattan were pressing for legislation outlawing the police "chokehold" used by a city police officer in the 2014 death of Eric Garner, who was also black. 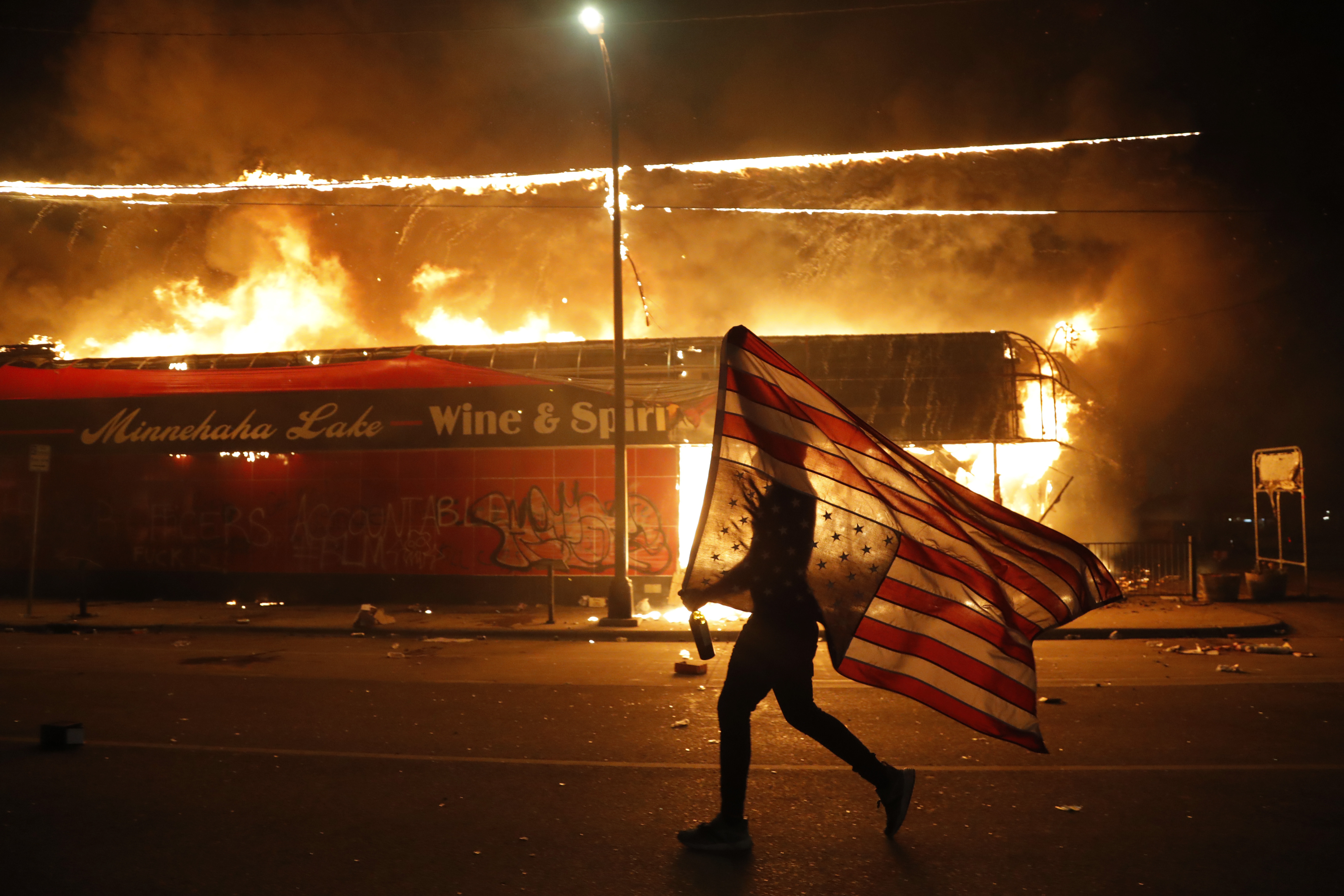 George Floyd, a 46-year-old black man who died after Derek Chauvin, a former Minneapolis police officer, handcuffed him and knelt on his neck for several minutes as he gasped for air.

Chauvin was arrested Friday on charges of third-degree murder and second-degree manslaughter.

The Secret Service could be seen taking at least one person into custody outside the White House on Friday, local media said. 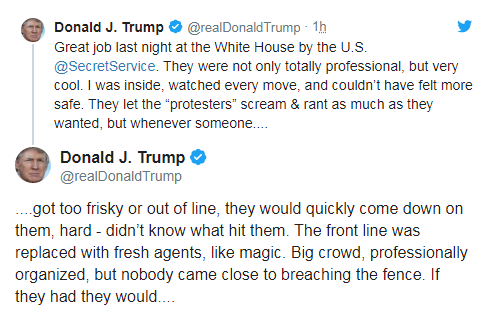 The White House has been locked down as protesters over George Floyd's death hit the U.S. capital Friday night, said local media, after a group of protesters gathered in front of the White House overnight.

The protest began about 10 p.m. Friday night and the scene mostly quieted down by 3:30 a.m. Saturday.

The crowd thinned out, and Secret Service Officers were able to expand their perimeter and barriers around Lafayette Park across from the White House. This was the second time that protesters gathered outside of the White House during the evening and early morning hours.

The lockdown was lifted just before 8:30 p.m. as protesters marched to different parts of the city, before returning to the White House later in the evening and into the early morning.

In a Saturday morning tweet, U.S. President Donald Trump said the protests in front of the White House on Friday had "little to do with the memory of George Floyd," while providing no evidence to back up that claim, adding that demonstrators, "were just there to cause trouble."

Trump alleged, without evidence, that protesters were "professionally managed." There is no indication that they were.

"Tonight, I understand, is MAGA NIGHT AT THE WHITE HOUSE???," he wrote, without explaining what he meant by that.

He thanked the Secret Service for their handling of protests in Lafayette Park Friday night. 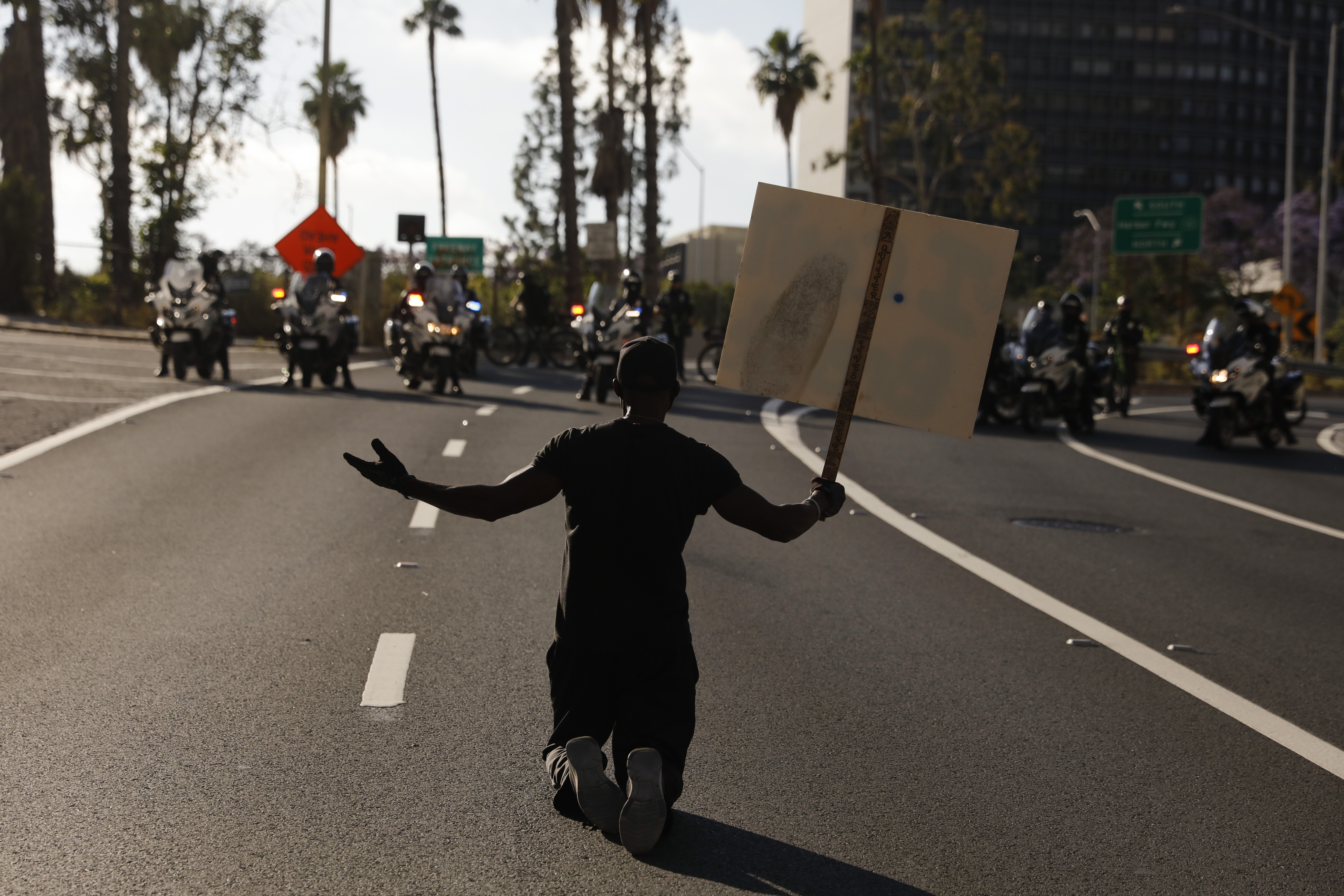 A man kneels on the street in front of police officers while chanting "I can't breathe" during a protest over the death of George Floyd, in Los Angeles, May 29, 2020. /AP

A man kneels on the street in front of police officers while chanting "I can't breathe" during a protest over the death of George Floyd, in Los Angeles, May 29, 2020. /AP

Hundreds of protesters took to the streets of downtown Los Angeles Friday night, clashing with police, during a third day of demonstrations over the killing of Floyd.

Protesters marched in the streets, shouting slogans such as "I can't breathe" to express their anger over the killing of the unarmed Minnesota black man by police.

The march has mostly been peaceful amid heavy police presence. A police officer was attacked in the street, and squad cars' windows were smashed by protesters, KTLA news channel, a local news outlet, reported.

Several people were detained for allegedly throwing objects at officers and damaging police cars, according to another local news outlet, City News Service.

A group of about 100 protesters reportedly blocked a major north-south freeway in downtown Los Angeles.

The Los Angeles Police Department urged people in a Tweet to avoid the Downtown Los Angeles area, including side streets and freeways, due to ongoing protests.

Demonstrations and riots have spread to cities across the United States after a video went viral of Floyd being suffocated to death by a white police officer in the mid-western state of Minnesota. 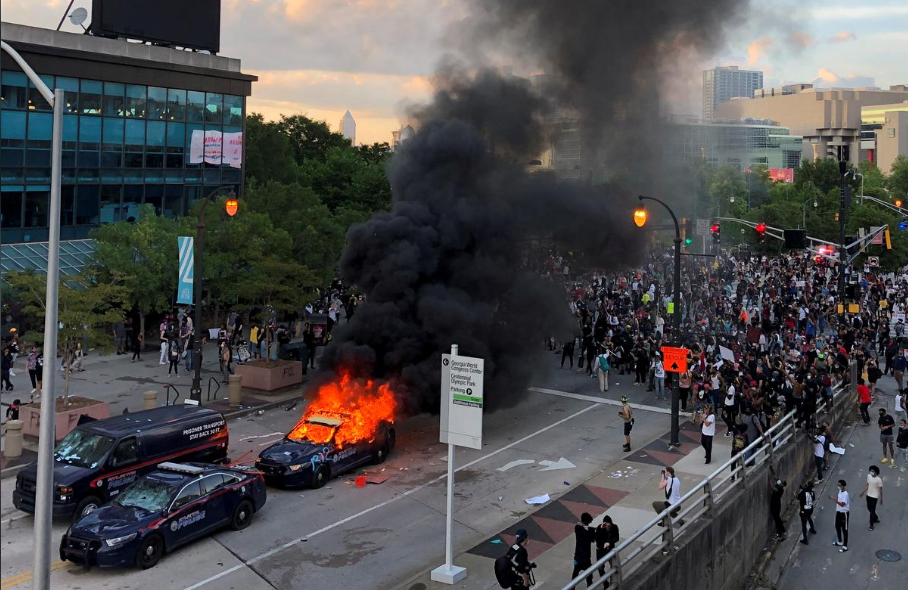 An Atlanta Police car burns as people protest against the death in Minneapolis police custody of African-American man George Floyd, near CNN Center in Atlanta, Georgia, U.S., May 29, 2020. /Reuters

An Atlanta Police car burns as people protest against the death in Minneapolis police custody of African-American man George Floyd, near CNN Center in Atlanta, Georgia, U.S., May 29, 2020. /Reuters

In an impassioned speech, Bernice King, the youngest daughter of civil rights icon Martin Luther King Jr., implored people to go home after more than 1,000 protesters marched to the state capitol from the Centennial Olympic Park, blocking traffic and an interstate highway along the way.

"The only way we get what we really want is through non-violence," Bernice King said in her father's hometown.

"Let's do this the non-violent way to deal with the evil of our time." 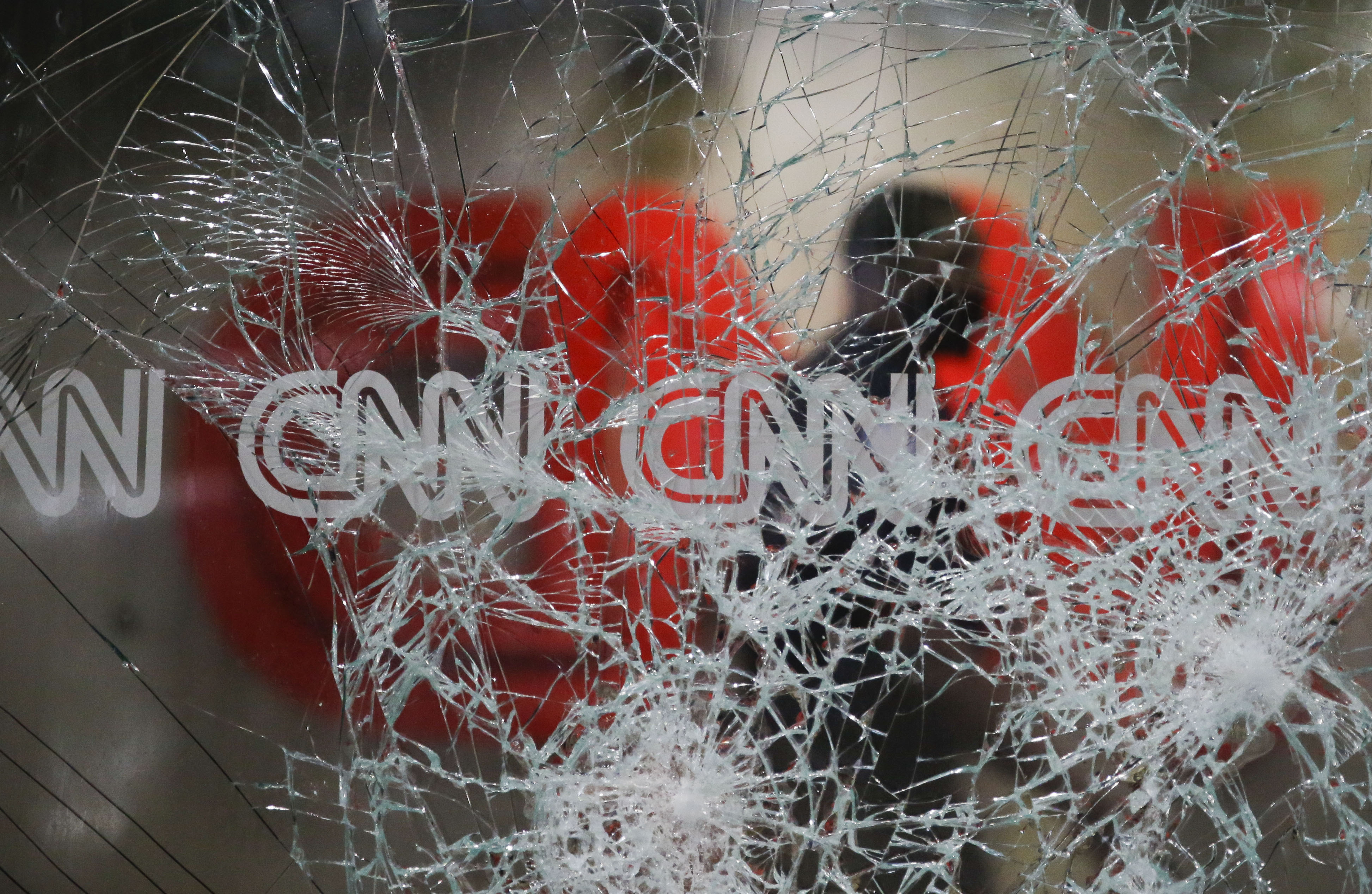 A security guard walks behind shattered glass at the CNN building at the CNN Center in the aftermath of a demonstration against police violence in Atlanta, May 30, 2020. /AP

A security guard walks behind shattered glass at the CNN building at the CNN Center in the aftermath of a demonstration against police violence in Atlanta, May 30, 2020. /AP

The Atlanta demonstration turned chaotic and, at times, violent. Fires were burning in downtown Atlanta near the CNN Center, the network's headquarters.

At least one police car was among several vehicles burnt. Windows were smashed at the CNN building, along with storefronts. Police pushed back the crowd, but they hurled bottles at officers. 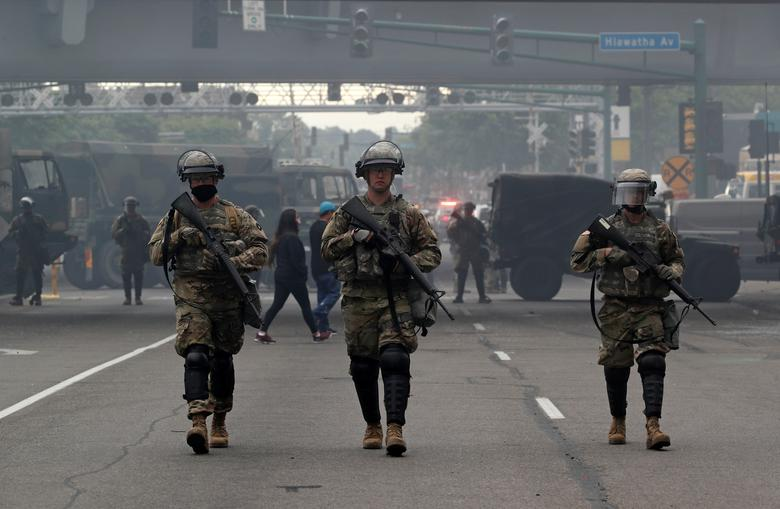 Hundreds of protesters defied an 8 p.m. curfew to gather in the streets around a police station burnt the previous night.

"We are out here because we, as a generation, realize things have to change," said one marcher, Paul Selman, a 25-year-old black man, who had just graduated with a master's degree in English from Minnesota State. "We need peace."

Peter McMahon, 26, a resident of the area around the police station and owner of two nearby properties, said, "This is my generation, and these are the people I went to high school with," adding, "This is not a surprise. I have lost good friends over this Black Lives Matter shit."

Harrington said that this is one of the largest civil police forces Minnesota has ever seen.

About 50 people have already been arrested as the protests continue on early Saturday morning in Minneapolis.

There could be more than 1,700 National Guard soldiers deployed in Minnesota by Sunday to help keep the peace amid the protests over the killing of George Floyd, Major General Jon Jensen of the Minnesota National Guard said. 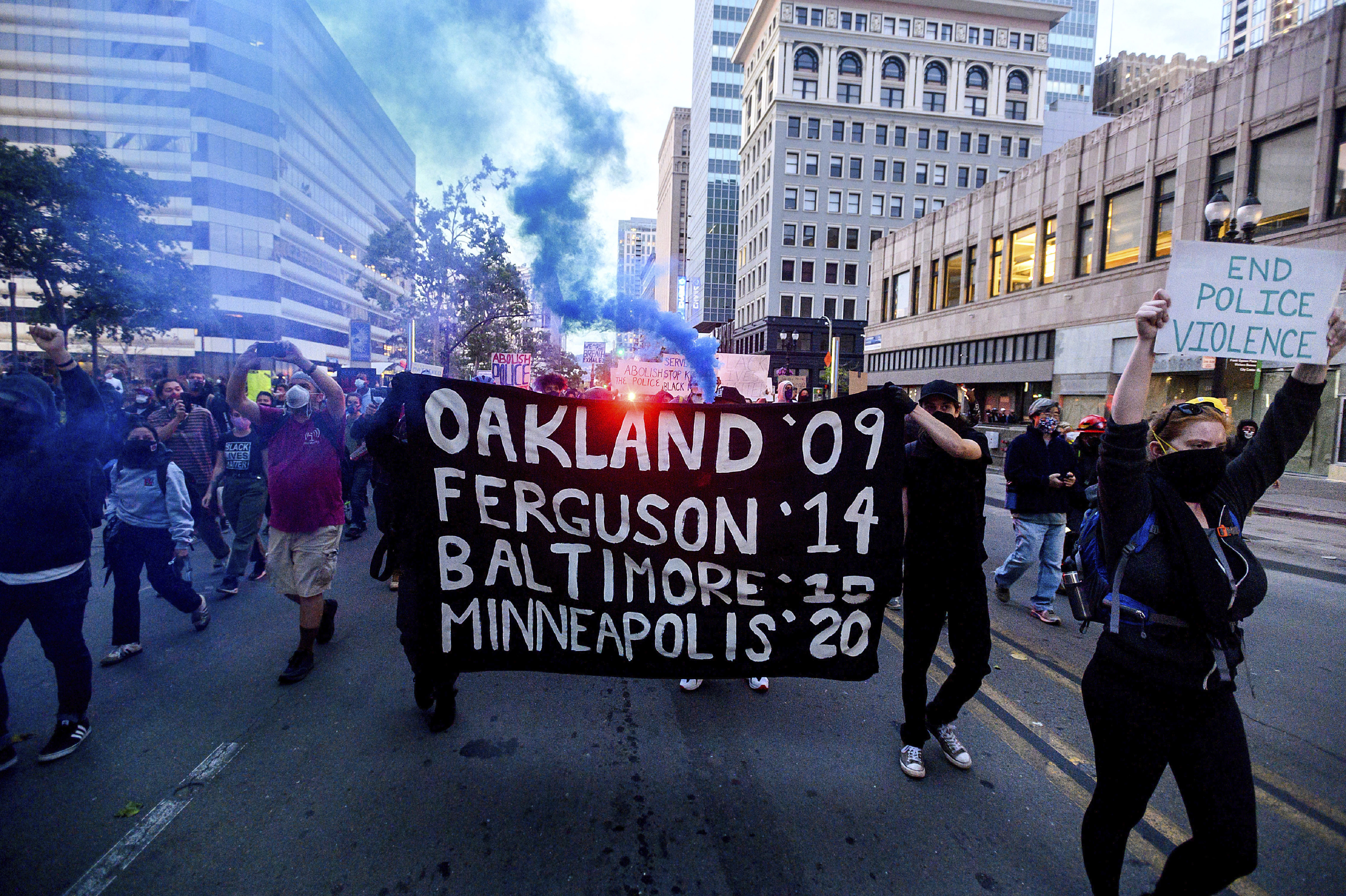 Hundreds in the automotive capital joined a "March Against Police Brutality" late in the afternoon outside the Detroit Public Safety Headquarters. Many chanted, "No justice, no peace." Some carried signs that read, "End police brutality" and "I won't stop yelling until everyone can breathe."

A 19-year-old man protesting in the city was shot dead on Friday night by a suspect who pulled up to demonstrators in a sport utility vehicle and fired gunshots into the crowd, then fled, the Detroit Free Press and other local media reported.

Denver saw the second day of protests after hundreds marched peacefully through its downtown demanding justice for Floyd.

Hundreds gathered on Friday in a protest organized by the group Black Lives Matter at City Hall. The crowd spilled onto Interstate 45's entrance ramp near downtown chanting, "I can't breathe," and "No justice, no peace."

After a night of violence in which at least seven people were shot, police in the Kentucky city braced for more protests over the killing of Floyd and several others, such as Breonna Taylor, shot by police in her Louisville home in March.