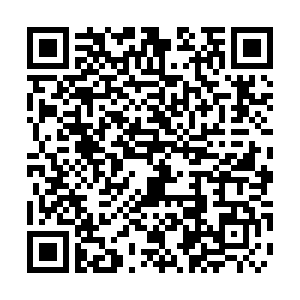 A spokesperson for China's Ministry of Foreign Affairs joined global voices weighing in on the police killing of George Floyd in Minneapolis earlier this week, tweeting one of the black man's final words – "I can't breathe."

Floyd, 46, died in police custody on Monday in an incident that sparked massive protests, some violent, across the U.S. with people flooding the streets to call out entrenched racism and demand justice be served.

The three words have become a symbol of police brutality in the U.S. and a reminder of how fatal racial bias can be. 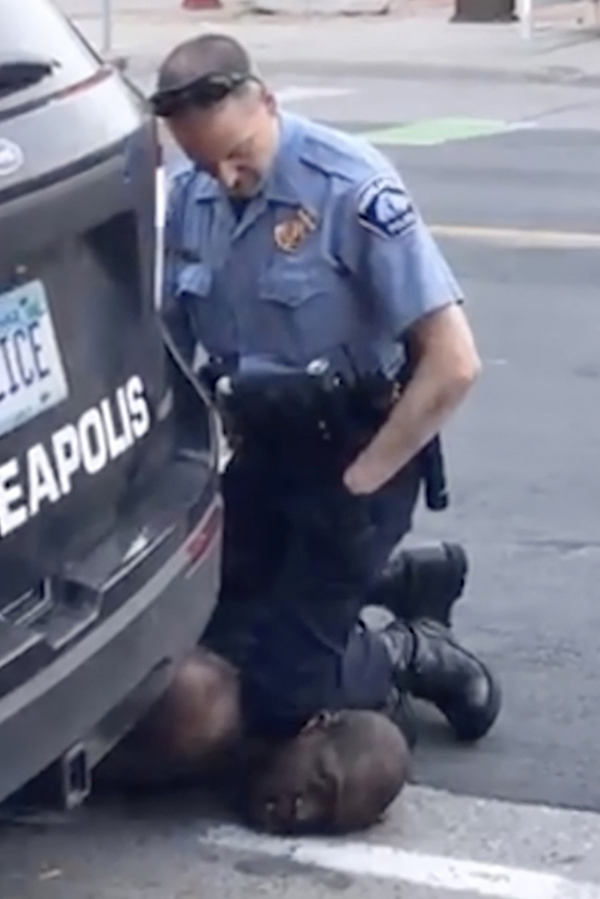 Floyd had uttered this sentence repeatedly while gasping for air as a white police officer knelt on his neck despite the man being unarmed and handcuffed.

He was arrested for allegedly using a fake 20-dollar bill to buy cigarettes. Officer Derek Chauvin pinned him to the ground and, using his knee, kept pressing on his neck.

In a video shot by a bystander, Floyd could be seen pleading with Chauvin to ease his hold, repeatedly saying "Don't kill me," and "Please, I can't breathe" – but the policeman wouldn't budge.

Chauvin has been charged with third-degree murder and manslaughter.

"I can't breathe" has echoed in cities across the United States as people protesting the killing chanted it. 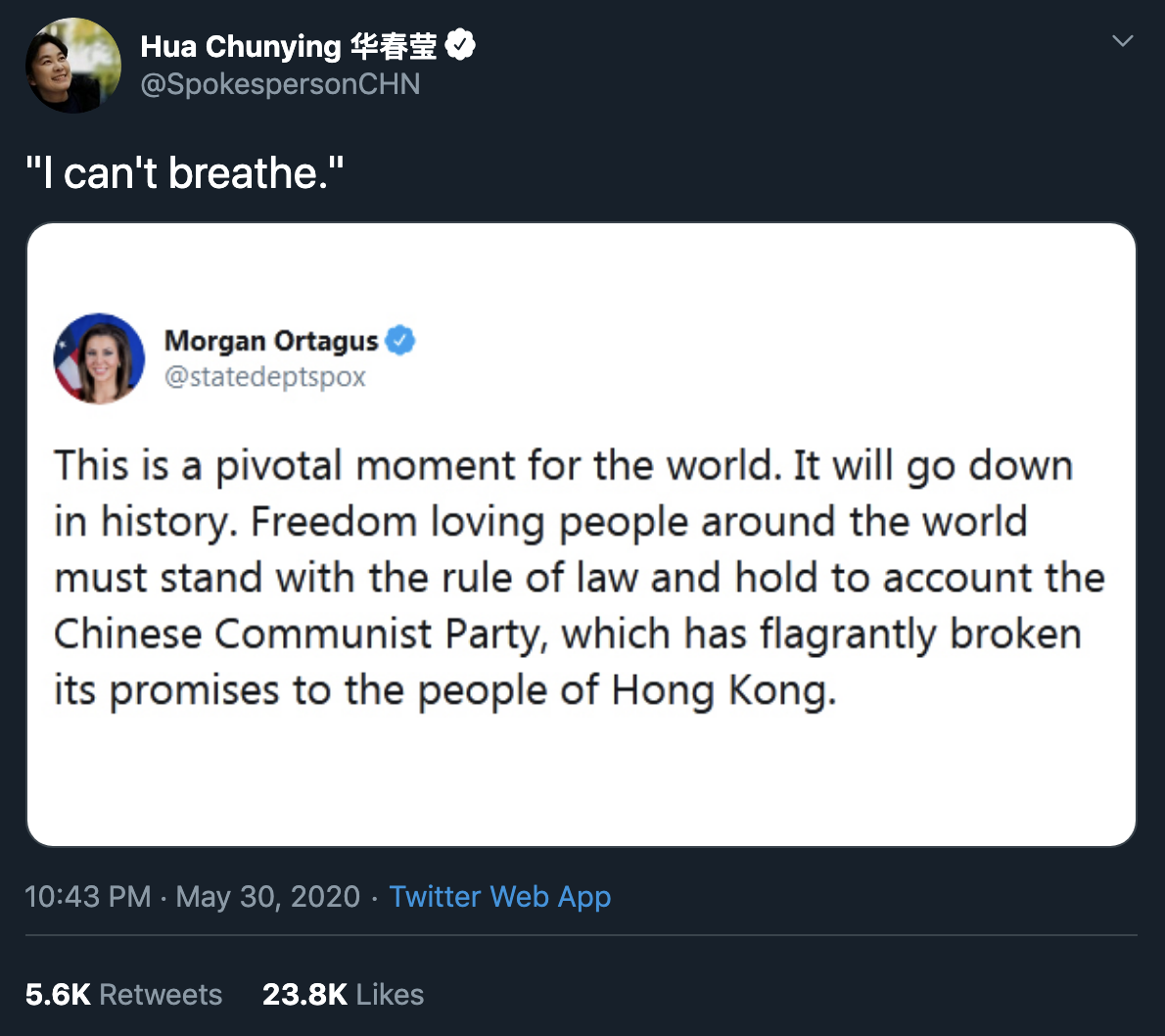 Angry protesters clashed with police in at least 30 cities across the United States with some hurling objects at the police and setting cop cars ablaze.

A number of cities have declared overnight curfews as the National Guard was called in. 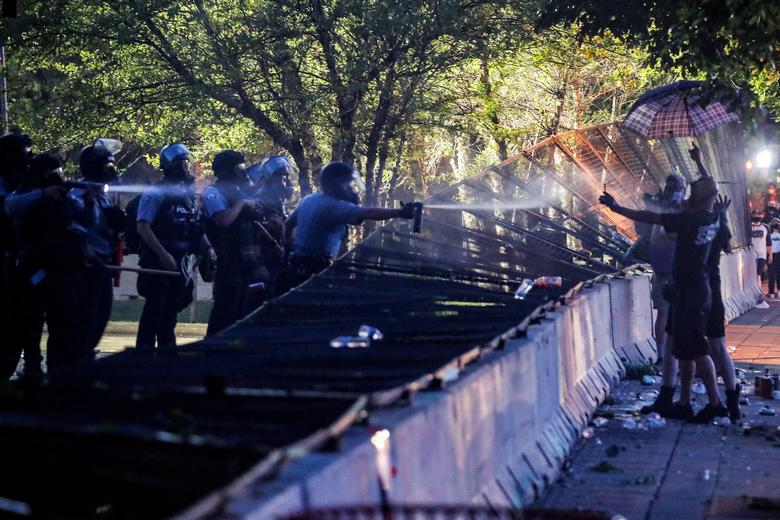 Within 15 hours, Hua's post was re-tweeted over 6,000 times, including by her colleague at the ministry, spokesperson Zhao Lijian.

Many shared their opinions below her post, criticizing systematic racism in the U.S.

"What is the American dream? It is made of the blood from black American," @RichL said.

"America: We don't stand with our people, we stand on their necks," another comment read, attaching a photo splicing the picture of the Statue of Liberty and the police officer kneeling on Floyd's neck. 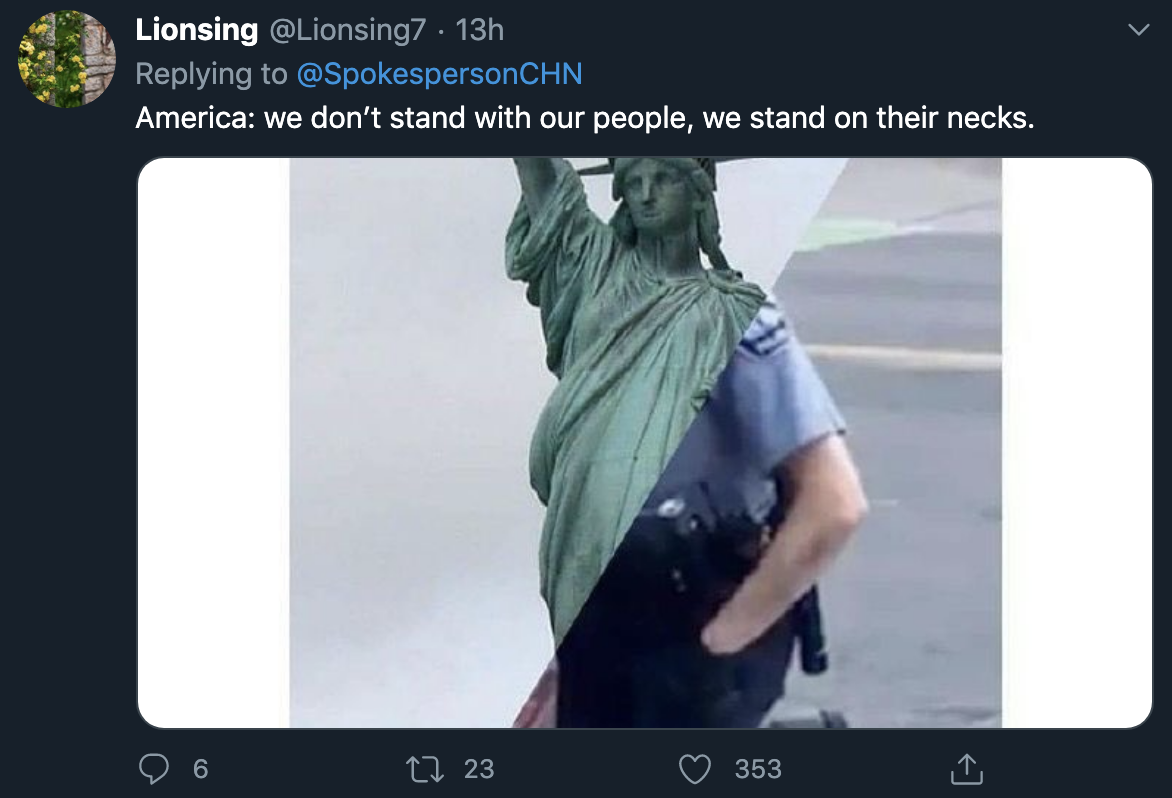 "Is this the freedom they're chasing? Freedom in America only means freedom for white people," @believe 20051009 said.