How is the resumption of work in the U.S. going?
By Zhang Huimin 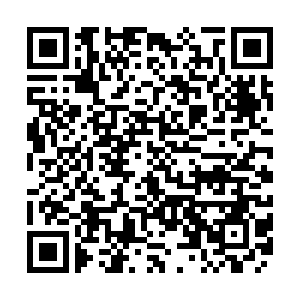 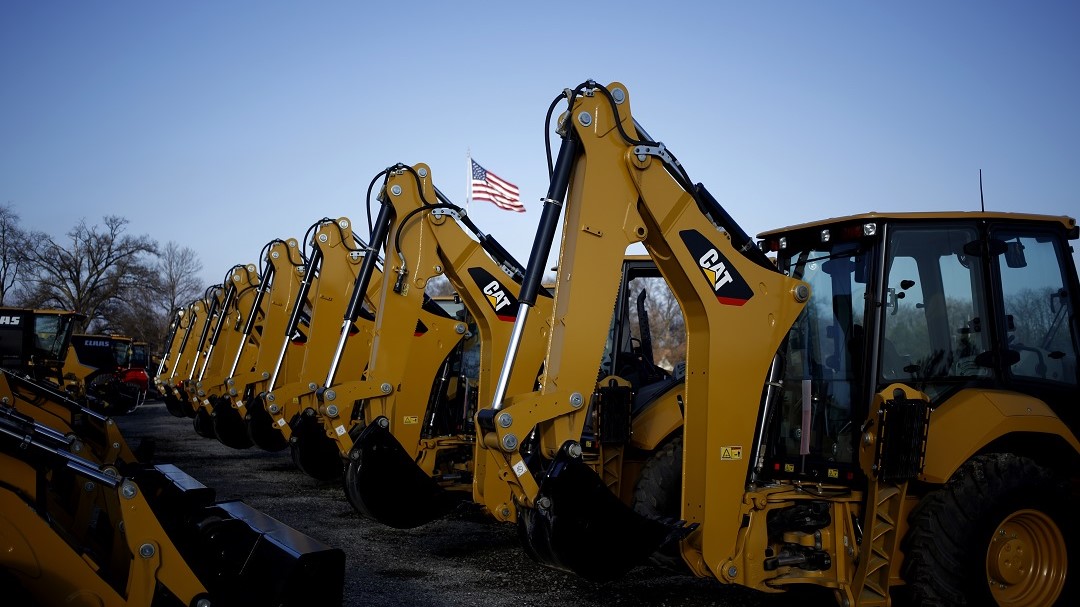 After the United States government issued its "open American guidelines," a three-phased approach to help states reopen economies from April 17, most states have begun some reopening measures with significant differences in time.

The states under the control of the Republican Party, regardless of the epidemic situation, have resumed work relatively quickly and aggressively, while states controlled by the Democrats are more careful, choosing generally a later time to resume work. For instance, New York City is on track to begin reopening June 8.

Due to rapid and radical resumption of work, the epidemic situation has rebounded in states like Arizona and Wisconsin.

Till now, the U.S. has recorded nearly 1.8 million confirmed COVID-19 cases with over 100,000 deaths, almost three times as many as the second-ranked country, Britain, which has recorded more than 38,000 deaths.

Why rush to resume work?

Zhang Yuyan, director of the Institute of World Economics and Politics at the Chinese Academy of Social Sciences, believes that it has a close bearing on the U.S. economy.

A total of 40.8 million Americans have filed for unemployment over the past 10 weeks since U.S. states directed residents to stay at home and forced nonessential businesses to close, hitting a disastrous rate not seen since the Great Depression, according to the U.S. labor department on Thursday.

Americans are losing their jobs in droves, and the St. Louis Federal Reserve even predicted at the end of March that the U.S. unemployment rate might past 32 percent, which would top the Great Depression peak of 24.9 percent. "Once the unemployment rate exceeds 30 percent, the country's policy and economy may face collapse," Zhang told CGTN. 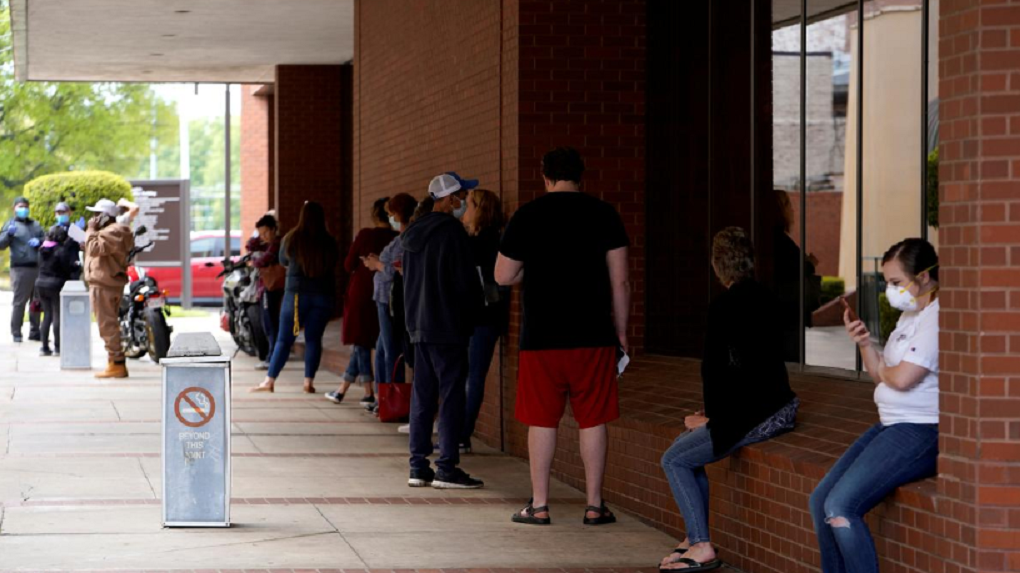 "Allowing for the approaching presidential election and staggering unemployment, and even if the inflection point of the epidemic appears, the resumption may still come at a sluggish pace, giving rise to more wild cards bugling out on Trump's path to re-election," he said.

Thus, Trump is perhaps betting that the inflection point of the epidemic has arrived, according to Zhang. "Because it's almost half a year before the election, and if there is a problem with employment, especially the unemployment rate cannot immediately drop after the infection peak, this will have a great impact on the economy. Unfortunately, the main assessment for re-election is exactly how the economy performs under the first government."

Liu Ying, fellow of Chongyang Institute for Financial Studies, Renmin University of China, agreed that "whether the economic indicators perform good or not determines Trump's political destiny, implying that little attention he may pay to series of problems faced with the resumption of production."

"Then comes the continuity of production," said Zhang, adding that multitudes of companies in the United States, especially small and medium-sized enterprises (SMEs) would face more difficulties in production resumption, because production may be disconnected once the shutdown is too long.

"In addition, Americans have been living beyond their means. Under the so much unemployment, Americans who do not resume work will have no food," Liu told CGTN, noting that on the issue of choosing between life and economy, therefore, going out to work may be infected, but at least is still a way to live for them.

Not to mention some people emphasize freedom more during contentious debates in the U.S. about which is more important, freedom or health, Zhang added.

In mid-March, U.S. automakers announced plant closures as the coronavirus spread and cases started surging in the Northeast, Louisiana and the Detroit area, the base for three biggest U.S. automakers – General Motors (GM), Ford Motor Company, and Fiat Chrysler.

In April, only 4,840 cars, pickup trucks and sport utility vehicles were made in North America by automakers that closed plants at various times, according to Automotive News, down from 1.4 million a year earlier. And data from Cox Automotive, a market researcher showed that sales of new vehicles in April fell by about 50 percent. 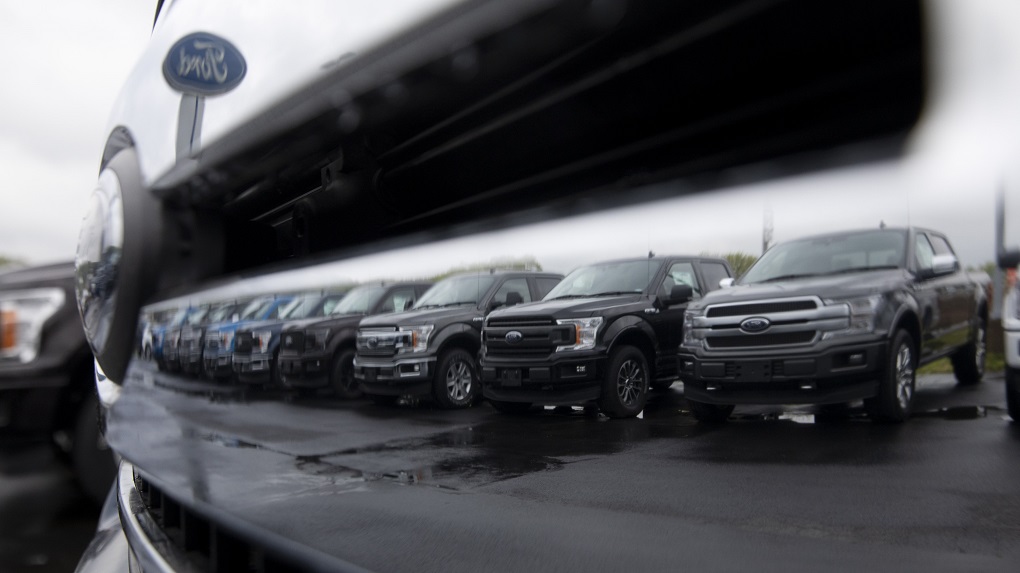 The reopening of plants for U.S. three big auto companies from May 18, therefore, is expected to breathe new life into the country's ailing economy, and deemed as a closely watched test of whether workers across U.S. industries will be able to return to factories in large numbers without a resurgence of infections.

However, in less than half a month, second-largest U.S.-based automaker Ford closed three U.S. assembly plants. In Dearborn, Michigan, the plant was closed after a worker tested positive for COVID-19. While a plant in Chicago closed due to parts shortage and a Kansas city plant was shut to carry out mandatory cleaning and disinfection.

"On the one hand, the American automobile industry has its own specialty, that is, high degree of automation, relatively easy for people to ensure a safe social distance. On the other hand, the automobile industry is a huge industrial chain, so the reopening of plants will play a leading role in the resumption of production in the U.S.," Zhang said.

"However, it is more of symbolic meaning because the auto industry is the backbone of the U.S. manufacturing but the latter only plays a small role in the country's economy," he added.

According to a study released by the St. Louis Federal Reserve in 2017, the proportion of manufacturing in real GDP of the world largest economy has hovered around at a low level, from 11.3 percent to 13.6 percent despite Trump's struggle to revive the U.S. rust-belt in the past three years.

"Meanwhile, because the industry's supply chains are closely intertwined between hundreds of companies across North America, but not all factories are highly automated," said Liu, concluding that the speed with which companies can resume will depend in part on how quickly its neighbor Mexico and Canada loosen stay-at-home orders.

Will service industry continue as normal?

The U.S. overall consumer price index (CPI) tumbled 0.8 percent last month, the largest decline since December 2008 as gasoline prices plunged 20.6 percent, according to the country's Labor Department, while the core CPI,  which excludes volatile food and fuel costs, saw the biggest drop in data back to 1957, falling 0.4 percent from the prior month.

Meanwhile, figures from earlier this month showed the leisure and hospitality industry was the hardest-hit, with 4.8 million jobs lost – nearly a 40 percent unemployment rate due to shutdown measures. 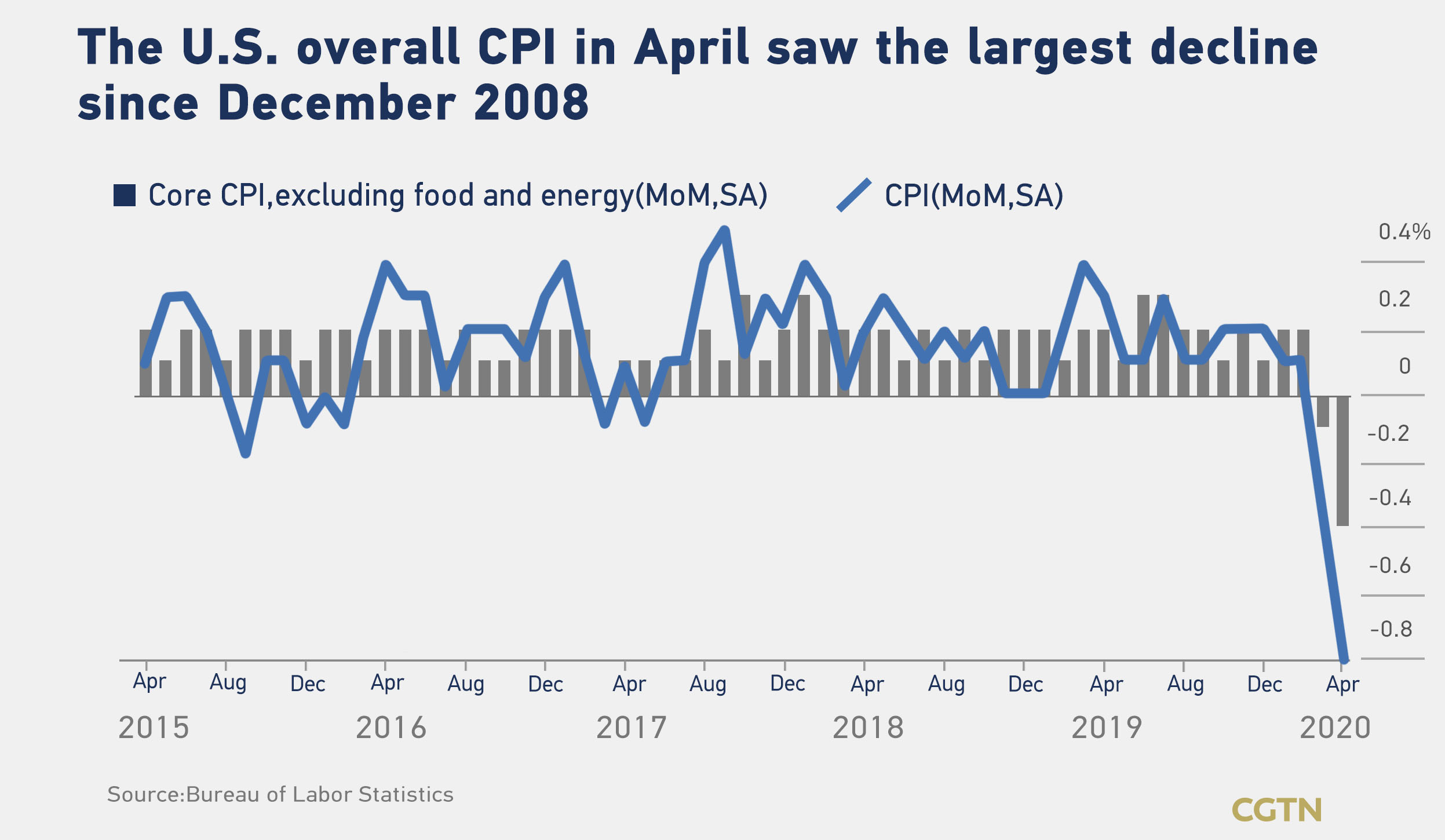 A range of businesses are reopening with far-from-normal procedures, like social distancing in dine-in restaurants and movie theaters, meaning foot traffic is still down compared with pre-shutdown times.

"The recovery of the service industry, accounting for nearly 80 percent of the U.S. GDP, is particularly difficult because it is a particularly typical industry that requires human-to-human contact and the contact as normal is impracticable if the outbreak cannot be controlled basically," Liu elaborated.

And Zhang emphasized that compare with the manufacturing, the recovery of the service industry may be a bit more difficult. "Because the service industry is facing not only recovery but also transformation, as people may have adapted to work modes such as online conferences, and of course there may be retaliatory consumption. Thus, the uncertainty of recovery may be greater."

Liu further explained that though the epidemic has completely changed the development model of the service industry, transformation will take time. "Although the E-commerce in the U.S. started earlier than China and the AI and the Internet technology is more mature, the initial development of e-commerce at present can not totally rely on robots, for example, the last-mile deliveries still depend on people."

"Secondly, the delivery network of the U.S. is not so perfect as China due to high labor costs. Then, demand of the mobile Internet is not very large in the U.S. because of its mature traditional fixed network telecom technology. Mostly, over 800 million Chinese netizens offer a great space for the E-commerce to release its grand economies of scale," she noted.

Last month, Morgan Stanley expected the real GDP of the United States to contract 5.5 percent in 2020 on an annual average basis, the steepest annual drop in growth since 1946.

JPMorgan economists also issued an even more dire forecast of the U.S. economy for the second quarter – a 40 percent decline, which is likely to break the record of 62 years ago when the U.S. economy only saw a 10 percent slump in the first quarter of 1958 amid the Eisenhower recession of August 1957 to April 1958.

Goldman's economist on Wednesday predicted that the U.S. jobless rate will stay around 12 percent as of 2020 and still remain at eight percent through 2021, "well above the levels in most other advanced economies".

"In fact, the problem faced by many states in the United States is that they are not capable of providing nucleic acid tests for all those who resume work. In fact, if there is no problem after the test, of course the resumption is unhindered. But currently it is deteriorated to a mixing between the ineffectiveness of epidemic prevention and control and the inability of the economy to fully resume production," Liu told CGTN.

"In addition, the United States is a federal system, each state has its own independent decision-making ability, laws and taxes. So they are not willing and will not listen to Trump if they think it's unnecessary," Liu cited.

Actually, since early March, the U.S. Congress has passed bills allocating three trillion U.S. dollars to combat the pandemic, including taxpayer money for individuals and companies with more aid expected to blunt the economic impact. 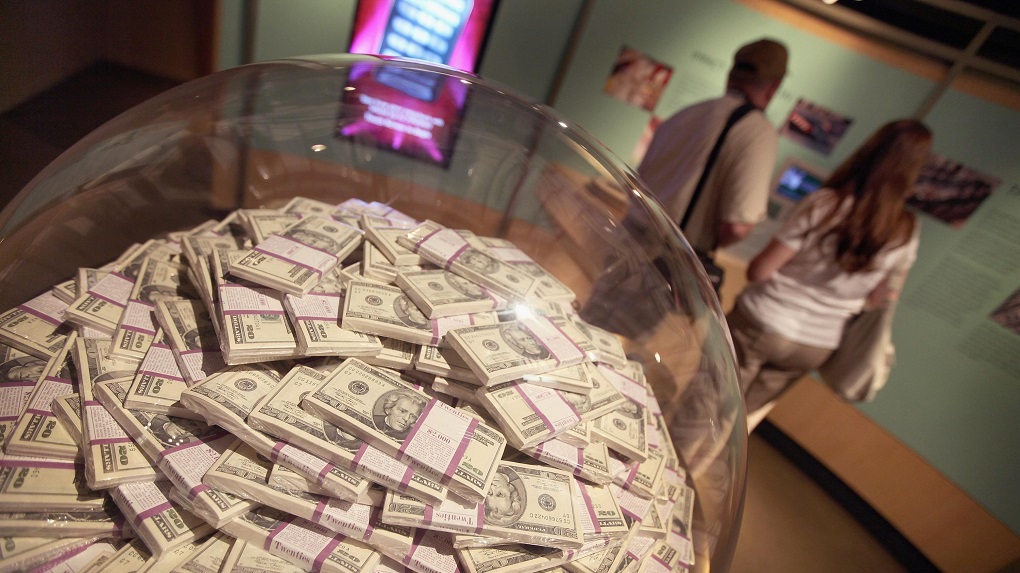 One million dollars in 20 U.S. dollar bills is displayed at the Money Museum in the Federal Reserve Bank of Chicago June 22, 2011 in Chicago, Illinois. /VCG

One million dollars in 20 U.S. dollar bills is displayed at the Money Museum in the Federal Reserve Bank of Chicago June 22, 2011 in Chicago, Illinois. /VCG

The IMF forecast last month that the public sector deficit of the U.S. will surge from 5.8 percent of national income in 2019 to 15.4 percent this year, of course it also projected provisionally that global public deficits will climb by 6.2 percentage points this year, topping nine percent in 2008.

The U.S. federal debt burden is also ballooning. The federal debt held by the public, which amounted to just 31 percent of GDP until 2001, more than doubled after the financial crisis. The Committee for a Responsible Federal Budget last month predicted the ratio in 2022 will hit the 106 percent record set at the end of World War II.

The issue now hinges on how this public debt explosion will be financed if future growth does not match?

According to Liu, the world has not come out of the financial crisis of 2008 and the debt crisis of 2009, including the U.S., because a typical feature of getting out of dilemma is the emergence of very prominent technological innovation, but it has not.

"The Federal Reserve has passed round by round of quantitative easing, but the structural conflicts still remain. The wall street rising for more than a decade is actually supported by repurchases to increase capital flow rather than technological innovation," she said.

Now the U.S. government seems close to running out of stimulus options, including cutting the benchmark borrowing rate to a range of 0-0.25 percent, where it was during the 2008 global financial crisis, and uncapping the quantity of quantitative easing to treat the symptoms, not the causes, of the malaise, Liu added.